COMMENT: Not quite the goalscorer he needs. Nor the winger his strikers require. Just what will Ole Gunnar Solskjaer do with Anthony Martial? And will it be a choice that is entirely that of the Manchester United manager...?

So the story goes that those making the decisions above Solskjaer spy an opportunity. With the market reopening this summer. With Martial failing to make himself a fundamental part of his manager's plans. There's now a debate around whether United should seek to cash in. Particularly with Solskjaer's team building not yet complete.

And from recent evidence, you can understand the beancounters raising the possibility. Seven goals from 32 appearances isn't the stuff of a natural striker. And even by Martial's own ambitions, the France international isn't the type of wide player Solskjaer is now shopping around for. As good as he is on the ball. Martial isn't known for his delivery from out wide. Indeed, it's not a reputation he actually wishes to pursue. The 25 year-old sees his present - and future - as an outright No9. But for where Solskjaer wants to take his team, on current evidence, Martial isn't the No9 to help his manager reach that target.

So they sell. He won't be transfer-listed, but United will make it known across Europe that Martial is available. At least that's one scenario on the table...

Problem is, Solskjaer doesn't see it that way. The Norwegian rates Martial highly. He believes the club's actual No9 can grow into the shirt. And for those who've put the sale option to him, he's come back arguing Martial's goalscoring achievements last season: 23 goals from 48 games across all competitions. Significantly, 17 in the Premier League from 32 games. A second-half surge of goalscoring form which catapulted United into a top four finish which had been long written off before Christmas. Bruno Fernandes was the catalyst, but it was also the fitness and goalscoring form of Martial which managed to get Solskjaer's plans - and his Old Trafford career - onto the right trajectory.

So there's a bit of loyalty there. A bit of extra patience afforded by the manager towards his forward. Something Solskjaer just about admitted when pushed about Martial's current slump last week.

"Anthony knows what we want and is working really hard to do well for the team," said the Norwegian. "That's what's pleasing me every day in training.

"He's not going to sit down and wait for things to happen. He knows he will have to make it happen himself. Everyone goes through a difficult patch. Anthony is working hard and that's the main thing." 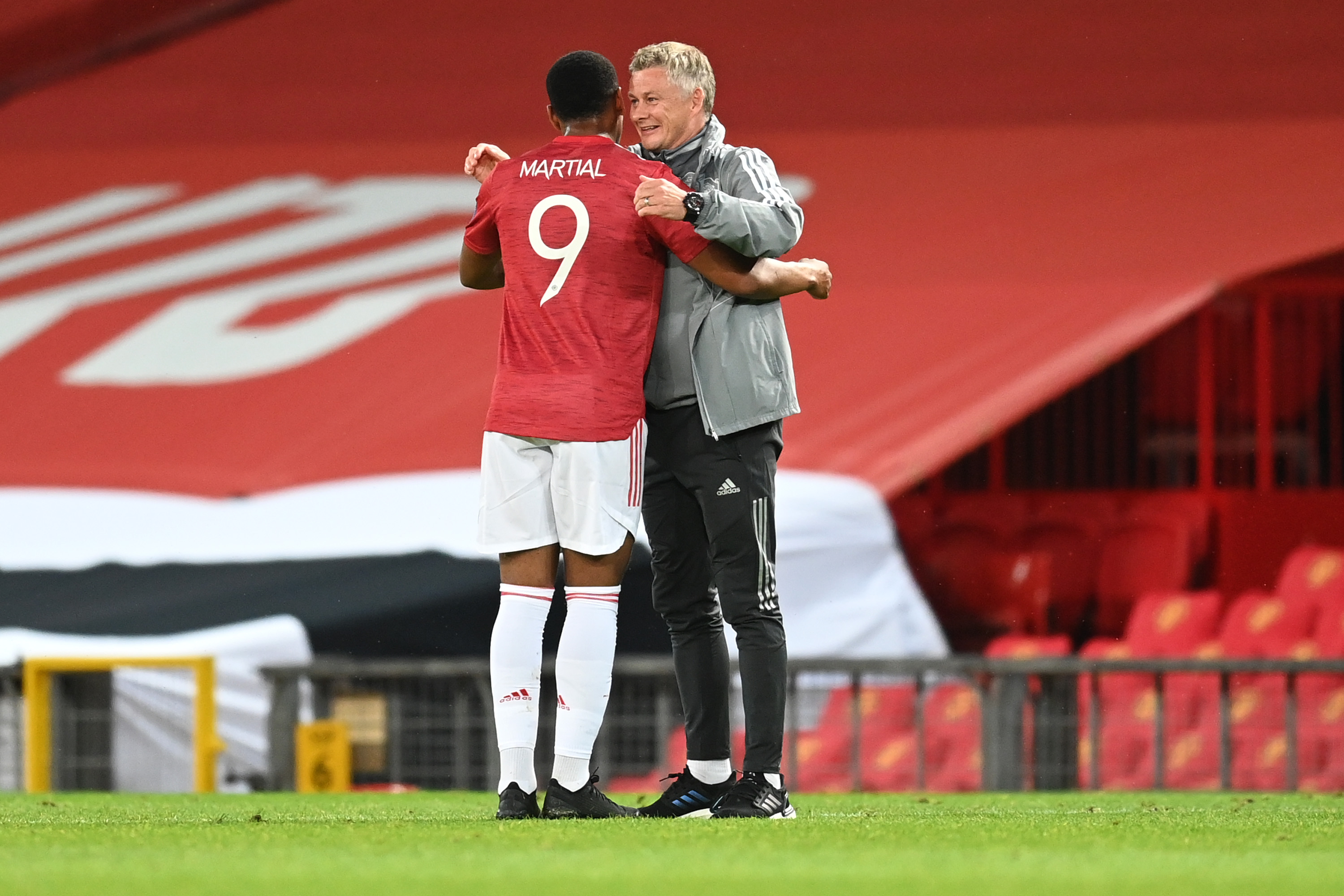 Martial and Solskjaer together after victory against LASK last season

So those one-on-one chats have been held. An arm around a shoulder. A piece of advice from one striker to another. And for Solskjaer, Martial is responding in the right manner. Indeed, for the manager, United will go forward with Martial as part of his squad. The talent is there. As is the potential. And as last season has shown, he has a record he can now lean on and draw from. But this goes deeper than simply working with a player to help snap a slump.

Last week, for the return-leg of their Europa League tie with Real Sociedad, a familiar face was in the visitors' squad. Adnan Januzaj, who Solskjaer, in his first spell at United, worked with as academy coach, was back on the Old Trafford pitch with La Real. And Solskjaer, pointedly, made clear what he thought of the winger, not just as a player, but also how he was treated by previous management teams.

Solskjaer said, "Yes, there are no fans there of course, but to be at Old Trafford, which is where he should have been and could have been playing, I'm sure he'll play really well and he'll try to play his best game."

It slipped under the radar for most. But that was some dig at his predecessors. And you can understand it given that Januzaj, at least the 2013/14 version, is the exact prototype of the winger Solskjaer has been seeking for the past three transfer windows.

Martial isn't that type of player. But should those lobbying for his sale get their way, he could develop into the unnecessary regret of this Solskjaer era.

The positive news is that those lobbyists are in the minority. Indeed, asked about the story, two different Carrington sources told this column it was the first they'd heard of it. A nice flyer. Maybe even one planted to give Martial that final little rev-up. But there's no plans - and been no discussions - about letting it be known that Martial will be put up for sale this summer.

Yes, there's been some frustration with his form this season. Yes, there was real hope of Martial taking the momentum gained from last term and making a big step in his development this campaign. That it hasn't happened is something that has left even Martial disheartened.

But there's belief amongst the coaching staff that last season was no one-off. That Martial can find that missing rhythm and help United in the run-in - and beyond. This is a player Solskjaer wants as part of his attack. Martial isn't Romelu Lukaku. The sale of the Belgian was a decision with the 100 per cent approval of Solskjaer - and Mike Phelan, his No2. The Norwegian wishing to take his team in another direction - a path which requires players of Martial's type rather than the Inter Milan centre-forward.

For this season, Martial isn't meeting the goalscoring needs United are seeking. But he also hasn't lost the support of his manager. If it's left to Solskjaer, Martial will remain a United player this summer - and beyond.