Sancho a Man Utd compromise? Why it's not Jadon or bust for Solskjaer

COMMENT: So he's the compromise? A good compromise. Potentially a world class compromise. Yet still, Jadon Sancho may not after all be the priority target Manchester United have been seeking these past 12 months...

Well, that's according to one long time source connected to this column. And when you consider the actions of Ole Gunnar Solskjaer, the United manager, and his vice-chairman exec Ed Woodward, the argument, when laid out, is a decent one.

The €110m being demanded by Borussia Dortmund for Sancho is massive. And it'd be a record for United. But it isn't the €150m United made clear to agent Jorge Mendes they'd be willing to pay for Joao Felix over Christmas. An offer relayed to Atletico Madrid's GM Miguel Angel Gil Martin - and swiftly rebuffed by the board.

Nor it is the €150m - though with structured payments - tabled to Josep Maria Bartomeu, Barcelona's underfire president, for Ansu Fati. The offer made before last season's 'restart' and actually the third for the teen in the space of six months. But again Bartomeu, as he explained to fellow board members over video conference, rejected the proposal.

And there was another one. Before Christmas. Only an enquiry - which didn't get much further. But United did ask Real Madrid intermediaries about Martin Odegaard. The Norway international enjoyed a career best season last term on-loan with Real Sociedad. All the potential which saw him tour and be 'interviewed' by Europe's biggest clubs as a teenager finally realised in San Sebastian. Of course, the link between Solskjaer and Odegaard is obvious. But it was also quickly shut down. Florentino Perez, the Real Madrid president, not even allowing United the chance to bid for their young prospect. Odegaard was a personal bet by Florentino and after five years of doubts - and criticism - there's next-to-no chance of the president letting slip the chance to stick one in the eye of his knockers. Now 21, Odegaard has just had his two-season loan with La Real terminated. He will be part of Zinedine Zidane's squad this season - and on the orders of Florentino. 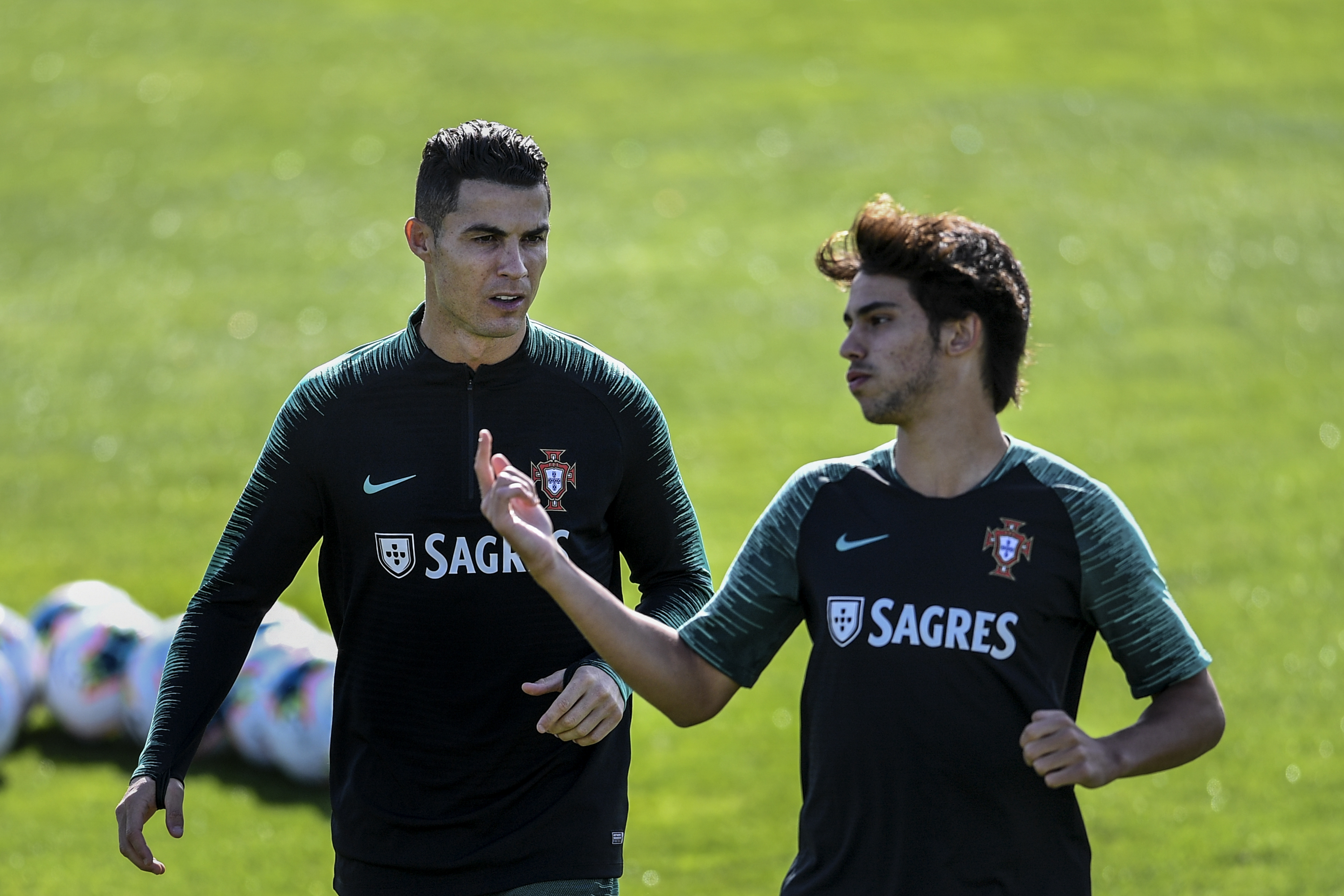 Cristiano Ronaldo (L) and Joao Felix together at Portugal training

So from all this, what do we know? Well, as our intermediary source told this column last week, United are looking outside the club for their new No7. Not a Bryan Robson type No7. But more Cristiano Ronaldo. And as in Ronaldo's case, one to arrive not with expectations of making an instant impact. Instead, a player to grow, learn and be developed in the best traditions of Manchester United. A young player to build the next decade around. And in terms of "profile", one who would arrive as a wide player. A free-scoring, assist-making winger. But with the aim of eventually developing into a central attacker. Again think Ronaldo, "or Luis Figo", as our well-connected source told us. No prizes for guessing where he comes from...

Felix, Fati and Odegaard. All very similar in on the pitch. And with similar personalities and backgrounds off it. From good families. Footballing families. United know what they want. They have a plan. And are sticking to it.

"It is definitely about quality," so said Solskjaer last month, "and it is going to cost money to get in players who are better than the ones we already have.

“We're just working as normal and sticking to a plan."

This one will be a foundation stone. A player to hang a team on. And money will be no object. Just like Harry Maguire over a year ago. Bruno Fernandes now eight months previous. United are seeking a player with a view to the next decade. This'll be a good seven, eight, maybe ten-year investment. And as such, money isn't the issue. Though Woodward, having been burned so often in the past, is determined not to be played for a mug now.

Which is why Borussia Dortmund know they need to consider carefully their plans for Sancho. A message that was relayed to directors last week. Their England international is the focus for United - but only for the moment. They have alternatives. And whether it be this No7. Or a new striker. Solskjaer is prepared to wait for the right one. His attempts to land Erling Haaland before Dortmund and Timo Werner ahead of Frank Lampard's Chelsea proof enough United will remain patient until the right No9 becomes available. Again, this will be a foundation stone signing. Just as is the motivation behind attempts to find agreement with Dortmund for Sancho.

But United will move on. It's not only Woodward who's been burned. Solskjaer, via Haaland and his entourage, still carries the scars of last winter's forlorn pursuit. And for all the enthusiasm coming from Sancho down the phone, United's manager won't wait forever. Particularly if Sancho is unwilling - as he is for now - to force anything through from his end of the table.

United want to get this one right. And Sancho is an excellent option. A potentially world-beating option. But he's only one of many. United are playing the long game. As they have done these past 12 months.

If it's not Sancho. It'll be someone else. It isn't the Dortmund man or bust. With the money United are prepared to invest, there's room to compromise. Same quality. Same potential. Even same personality. United will take their time with this one.