Ronaldo vs Ten Hag? Really? Why all signs suggest pair will thrive together at Man Utd

COMMENT: The appetite. The bottle. Erik ten Hag just doesn't have it. Indeed, the Dutchman doesn't want it. The incoming Manchester United manager doesn't want to have to deal with Cristiano Ronaldo. Or at least that's what the press say...

For the moment, we don't know what Ajax's departing coach thinks of Ronaldo - at least officially. But contrary to what we're seeing and hearing from the press, those closest to Ten Hag are suggesting everything is wide open.

Yes, Ronaldo won't be granted special status. Yes, he'll have to prove himself all over again in preseason. But was it ever any different for United's No7? From Jose Mourinho. To Zinedine Zidane and Maurizio Sarri. Every new coach Ronaldo has encountered has come with a warning label from the local press. And every time he's won them over. For this column, Ten Hag will be no different.

Indeed, as we say, our Dutch source insists there is potential for a great partnership. If Ronaldo wishes to stay - and nothing we've heard directly from his camp suggests he doesn't - then Ten Hag will give him every chance to play on with United next season. There'll be no corners cut, but Ten Hag will take preseason this summer with the hope - and expectation - of Ronaldo proving he deserves his place amongst the United squad.

And on paper, the confidence in the assessment from our source rings true. Ten Hag loves a centre-forward. Old. Young. His attacking structure is built around a mobile target man. From the rebuilding of a mid-30s Klaus-Jan Huntelaar, to the exciting breakthrough of Lassina Traore, through to what we're seeing Sebastien Haller now produce, Ten Hag not only leans on a centre-forward, he actually makes them better. The idea that the Dutchman can't get a tune out of Ronaldo. Or worse, actually doesn't want to take the opportunity to work with the Portuguese great... it just doesn't chime with Ten Hag's history at Ajax. 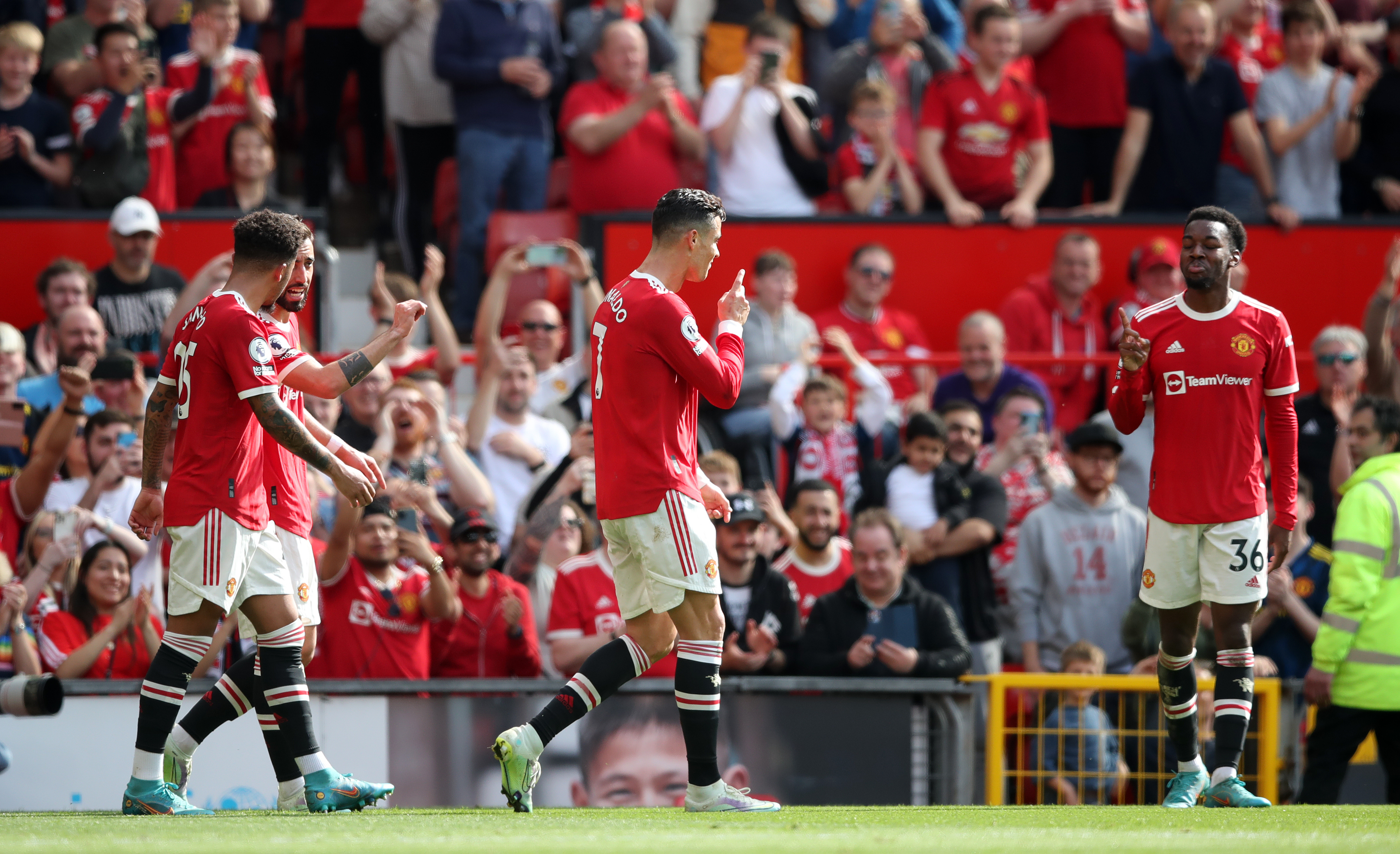 Ronaldo celebrates his second goal against Norwich with Elanga

And as he reviewed Ronaldo's performance against Norwich City on Saturday, it's difficult to imagine Ten Hag not wanting a piece of that. Indeed, as a coach, you fancy the challenge to help Ronaldo maintain - or even better - his form as he hits 38 years of age is one Ten Hag would willingly accept. If he could help Huntelaar enjoy some of his best moments late in his career, Ten Hag surely will fancy being able to do the same with Ronaldo.

And he'll find a willing, enthusiastic partner. For the moment. Even it is to be the Europa League. Ronaldo is committed to the second year of his United contract. The idea of helping the club rebuild is one he's warming to. That wasn't the original sales pitch. Indeed, it was quite the opposite. But as the season has wore on. As he's begun to be won over by the young talent within the club. Ronaldo is liking more and more the prospect of helping bring through a new generation.

The hat-trick performance against Norwich offered Ten Hag a glimpse of what Ronaldo will give him next season. The goals. The leadership. That's a given. But as we've heard more and more from behind the scenes, Ronaldo hasn't shut himself off from the club's youngsters. Indeed, it's been the opposite, and the way he and Anthony Elanga celebrated his first goal, then later handed his hat-trick ball to Alejandro Garnacho, was simply confirming what we've heard about the influence the Portuguese is having. An influence that can only mean good things for this team's future. Attitude. Intensity. Diet. These are all good things Ronaldo is imparting on the club's young players. This isn't the antics of Jesse Lingard. Nor the languid approach of Paul Pogba. With Ronaldo as the prime dressing room role-model, Ten Hag will know he has an ally.

And the same will go for the Dutchman's No2, Mitchell van der Gaag. Ajax are reluctant. And a release from his contract is no sure thing. But if Van der Gaag does follow Ten Hag to Old Trafford, it'll be a boon for United.

FC Basel tried and failed for Van der Gaag in February. The Swiss following an earlier approach from SC Heerenveen. Both attempts being given short shrift by Ajax. Van der Gaag is a wanted man. Even before his promotion from Jong Ajax coach last year, he resisted an offer to join Roger Schmidt's staff at PSV Eindhoven. If United do manage to convince Ajax to release Van der Gaag from his contract, they'll be getting more than simply a sounding board for Ten Hag to bounce off ideas.

Van der Gaag's arrival will be a step up. A much needed step up. A role which has been treated almost as a traineeship in recent seasons will be filled by a coach with a growing reputation and a cv which includes manager of NAC Breda - at the very height of their relationship with Manchester City. It will be a serious appointment by United. And a move to suggest a new, serious approach by the board overall.

And that approach could also reflect in Ten Hag's attitude towards Ronaldo. Some may say he doesn't fancy him. Others claim Ronaldo will cut and run. But dig a little deeper. Listen to those close to both men. And you soon realise there's every chance of Erik ten Hag and Cristiano Ronaldo working together next season.