Manchester City won the Community Shield on Sunday but it was Liverpool's surging second-half performance at Wembley that should be grabbing the headlines from this glorified friendly. Jurgen Klopp made an interesting tactical change to get Liverpool back into the match after City took the lead in the first half, pinning Pep Guardiola's team back for long periods of the game.

The final 30 minutes of the match showed that Liverpool's fringe players have a big role to play, and that with a potentially vulnerable Rodri in midfield the title could go down to the wire again.

Reporting from Wembley, here are five tactical talking points from the Community Shield:

At times last season Klopp's 4-3-3 formation was too narrow during spells of opposition pressure, and the Man City manager clearly targeting this flaw in the first half. His initial striker-less team selection was an attempt to get in behind Liverpool's high line at the earliest opportunity, but when Leroy Sane's injury put an end to that experiment it was Kevin de Bruyne's movement that became the key tactical feature.

De Bruyne and Silva did not operate as typical central midfielders, instead peeling off into wide, 'inverted winger' positions – appearing in the spaces either side of Liverpool's narrow three-man midfield. City's centre-backs found it relatively easy to find these two, particularly down the right, with Bernardo Silva and an overlapping Kyle Walker overloading Andrew Robertson.

City also targeted Liverpool's narrow midfield with quick diagonal switches out to first Sane and then Raheem Sterling, isolating Trent Alexander-Arnold. The result was an awkward first 45 for Liverpool, with Jordan Henderson and Georginio Wijnaldum looking a little lost as City cranked up the pressure and won the territorial battle, reducing their opponents to only the occasional counter-attack. 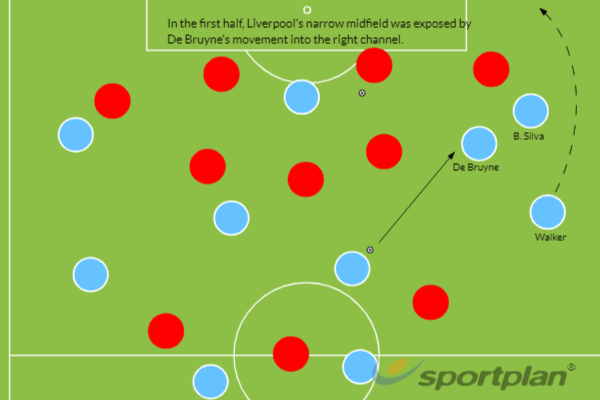 For the second half, Henderson notably changed into an advanced right-sided central midfielder, to some extent mimicking De Bruyne's role for City in the opening period. Having been ineffective in a bunched midfield, Klopp clearly instructed his captain to get wider and sit higher, offering Liverpool's struggling centre-backs a more direct passing outlet.

Liverpool had decided to play a more direct game with considerably more long balls, and while Henderson's changed role was crucial Wijnaldum's switch was equally important. The Netherlands international sat deeper, often becoming a third centre-back when Liverpool had the ball. This increased the simple passing options for Klopp's side, meaning City could no longer press easily and force Liverpool to give the ball away.

With Wijnaldum supporting short and Henderson offering a long ball, City were forced to drop off, leading to a major territorial shift; Liverpool held 42% possession in the first 45 and 64% in the second.

Klopp deserves credit for a subtle – but crucial – tactical change. 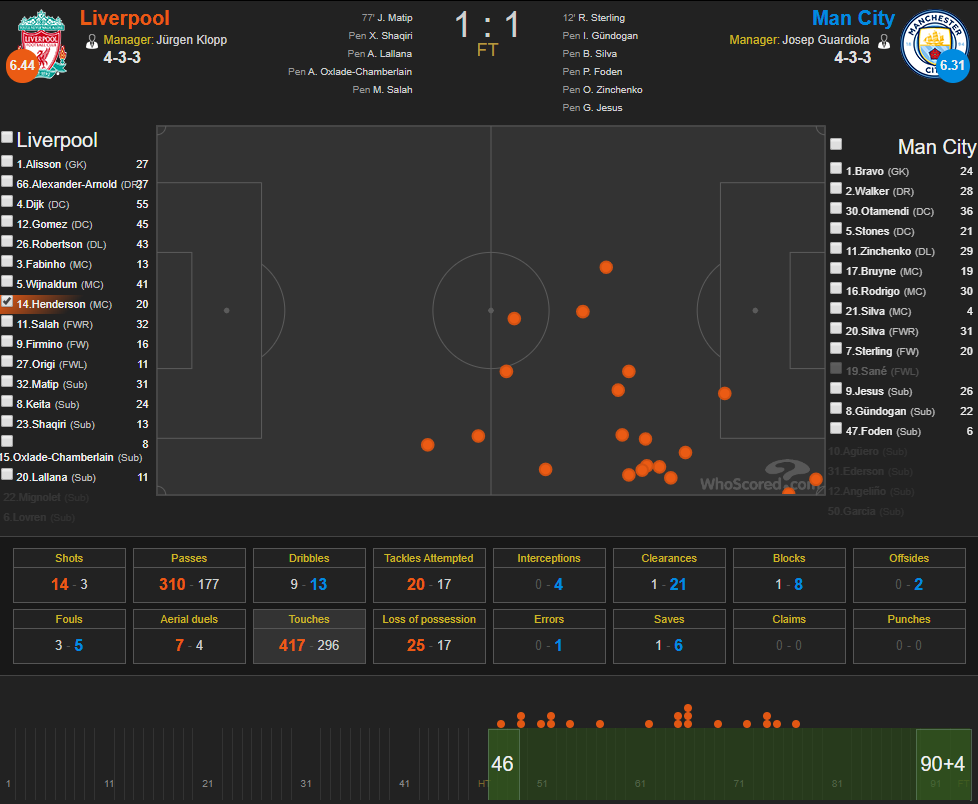 It's hard to find fault with Guardiola's City, but fans may be alarmed by how laboured their team looked in the second half. They dropped into a flat 4-5-1 and struggled to get out, frequently backpedalling as Liverpool launched longer balls into the channels for Mohamed Salah to drive at Oleksandr Zinchenko.

De Bruyne was quiet, Ilkay Gundogan just couldn't get a handle on the match after replacing Silva, and Gabriel Jesus was unable to offer the physical presence that City needed to regain some ground following relentless Liverpool pressure. Bernardo Silva and Raheem Sterling were both pinned back by the positive movement of the Liverpool full-backs, who were freed by Wijnaldum's deeper supporting role for Virgil van Dijk and Joe Gomez.

This is essentially only a friendly, but Guardiola's desire to win suggests City's sluggishness was not a case of being unmotivated. They couldn't get out, and eventually Liverpool's quiet pressure led to a free-kick from which they scored the equaliser. If City cannot up the tempo next weekend West Ham have a genuine chance of taking points.

4) Rodri shows promise on his debut, but clubs will target him

It was a mixed debut in English football for new Man City signing Rodri.

Starting ahead of Ilkay Gundogan on Sunday suggests Guardiola will trust the Spaniard to play regularly this season, and despite some good touches from the base of midfield against Liverpool Rodri certainly could be a vulnerable spot in the 2019/20 Premier League season.

Rodri lost the ball three times, twice close to his own penalty area and most notably when needlessly attempting to outmuscle a Liverpool player when he was in complete control of the ball. He looked tentative in possession – frequently choosing sideways passes – and seemed a little overawed by the pace of the game in the second half.

In fact, as Liverpool cranked up the pressure and hit the wings more frequently, Rodri was not particularly involved at all. His recycling of possession and special awareness were generally very good, and yet he did not show the defensive strength or quickness of thought that City get from Fernandinho. It would not be a surprise should West Ham look to dribble directly at Rodri on Saturday.

5) Energetic fringe players show Liverpool have the depth to challenge

Klopp sought to capitalise on his side's dominance in the second half by bringing on fresh legs in attack, and Adam Lallana, Naby Keita, Xherdan Shaqiri, and Alex Oxlade-Chamberlain all buzzed with the energy of players who know they need to impress their manager.

Shaqiri and Oxlade-Chamberlain in particular moved well, easily slipping into the pockets of space opening up around Rodri as the game became stretched in the final ten minutes. Shaqiri inexplicably disappeared towards the end of last season having been an important substitute in the first half of the season, and based on his short cameo here the Swiss will get more chances to impress.

Divock Origi was given a confidence boost by being selected ahead of Shaqiri, and although he was generally a nuisance to City it was Origi who switched off from the free-kick that gave Guardiola's side the lead. That won't help him stay ahead of Shaqiri, Oxlade-Chamberlain or Lallana in the pecking order.