COMMENT: The real Jose is back, apparently. But did he ever go away? Or is it just in the form of Tottenham and these players that Jose Mourinho has again found an environment that supports and excites him...?

The reaction spoke volumes. Beyond the headlines. Beyond even the result. Mourinho's response to that late, late defeat at Anfield told us everything we needed to know about how he feels about this Spurs job and this Tottenham team.

He can sense it. Feel it. Mourinho knows he has a team capable of winning the title. It could be this season. It could be the next. But the manner of their performance at Anfield gave him enough belief to go to war for these players.

The instant response to the final whistle took Jurgen Klopp aback. There was no chummy glad-handing from Mourinho. No resigned acceptance of another dominant Liverpool performance. No, not this time. Not with this team. Right to Klopp's face. Looking straight at the whites of his eyes. Mourinho, stony-faced, declared: "The best team lost".

So used to many - so many - of his counterparts taking the fawning route, Klopp initially thought Mourinho was joking. But there was no smile to come with these words. Jose was serious.

"He wasn't happy," Klopp would later say, "because he told me the better team lost – and I thought he was joking! But he wasn't. So that's it."

But that wasn't "it", not by a long chalk. Mourinho, in a second round of post-match interviews went further, accusing Klopp and his bench of trying to get Giovani Lo Celso sent off. In one single sound-bite, the Spurs manager upped the ante again, putting the media and match officials on notice.

Explaining why he was forced to substitute his Argentine, Mourinho explained: "With this yellow card and the behaviour of these guys they have on the touchline, putting incredible pressure on referees I feared for a possible second yellow card.

"And Gio was playing exactly in front of their bench in an area that very dangerous. So I was afraid of the yellow card and I had to take him off."

But hang on. That can't be right? Not Klopp, surely? The same manager who called out one of his own staff for celebrating a red card against Chelsea last season? And all those 'class act' headlines that came with it? Surely Jose can't be right? 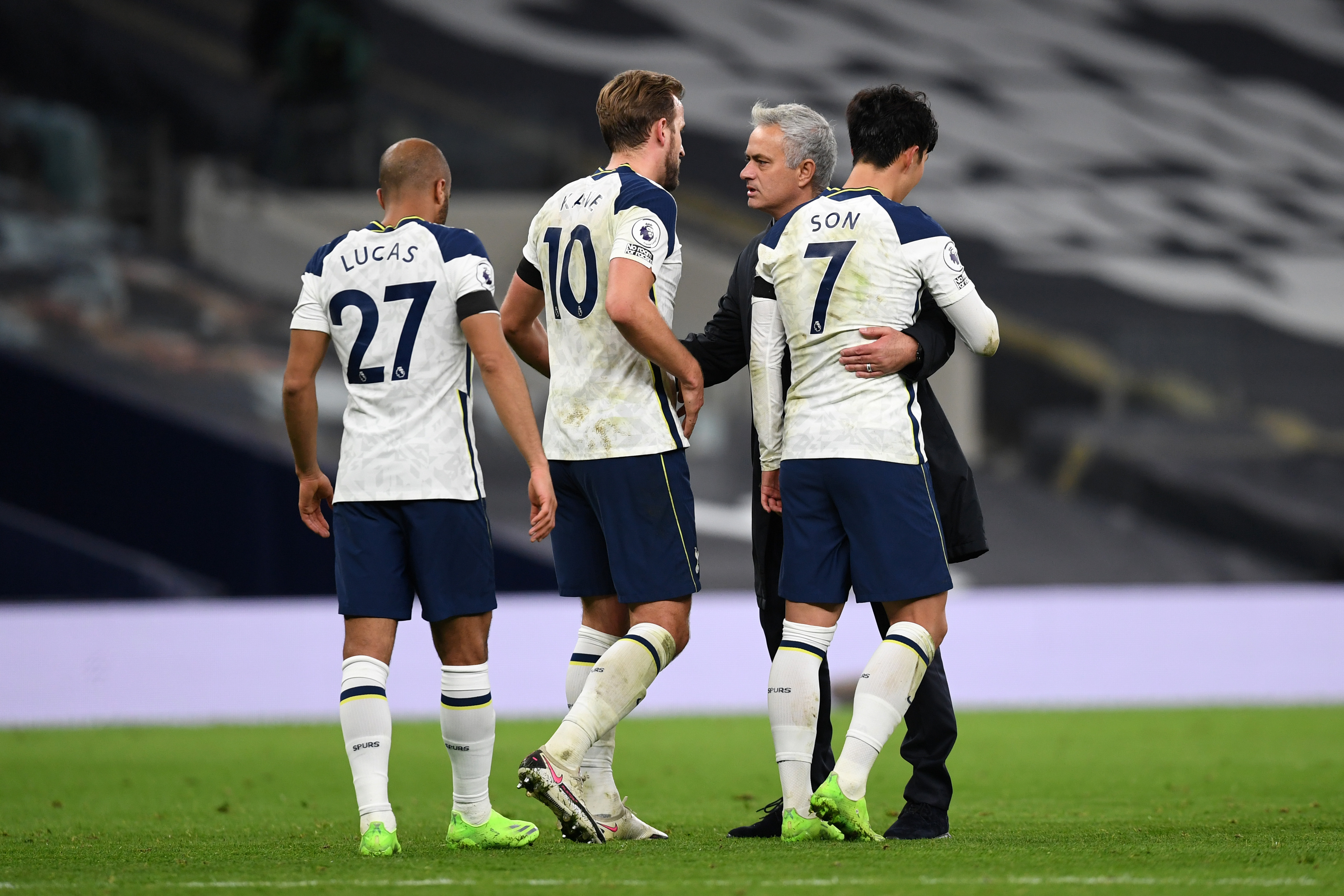 Mourinho celebrates victory over Manchester City with his Spurs attack

But this is a different time in a season. And against a different opposition. Being streets ahead at the top of the table, Klopp could indulge himself and call out his staff last term. Making an example of them. But not now. Not for this game. Indeed, not for this season. Mourinho's accusations coming just weeks after ex-ref Mark Halsey had criticised Klopp for "screaming" at match officials during victory against Wolves. If they're to successfully defend their title, Liverpool are going to have to fight for it. This won't be a campaign for niceties.

And among those right in the thick of it will be Mourinho and Spurs.

Mourinho was always happy with the squad he inherited from Mauricio Pochettino. A great goalkeeper in Hugo Lloris. An outstanding centre-forward in Harry Kane. A couple of decent centre-halves. And a ball-winning monster in the form of Eric Dier in midfield. He could work with this lot. Major surgery wasn't required. It was essentially a Jose team.

But there was still the mentality to tackle. The culture amongst the players. Indeed, within the walls of the club. Were Spurs prepared to take that final step? And were they prepared to do it on his terms?

Well, the manager had his answer over the summer. Mourinho receiving the type of support from Daniel Levy, the chairman, and the club's paymaster Joe Lewis, that he never saw from Manchester United.

Everything Mourinho requested, Levy sought to make happen. Even with the bill for a new stadium - and the prospect of it sitting empty for a year - Spurs found a way to meet the manager's demands. Pierre-Emile Hojbjerg would arrive for big money. Joe Rodon too. Plus there were the loan coups - Gareth Bale was brought back from Real Madrid; Carlos Vinicius added from Benfica. Has there ever been a better twin loan deal than Bale and Vinicius in the past five years?

Where United's top brass complained to their press favourites about Mourinho's demands for a Harry Maguire to be signed, or Luke Shaw replaced, Levy accepted his manager's recommendations and went out and tried to make it happen.

But it doesn't begin and end with Spurs' spending. It's also the support for his decision-making that clearly has Mourinho bouncing. Again, in contrast to what he endured at United, there's been no push back from within over his treatment of Dele Alli. And even from outside, there appears a general consensus that Mourinho has this one right. Just compare that to the tension that existed with Paul Pogba at United... and there's still some connected to the club who insist the Frenchman is a positive force.

Indeed, at Spurs, it couldn't be more different. Their best player. Mourinho's best player. Is also their most popular and positive. It must be a pleasure for Mourinho's staff going into Spurs Lodge every day knowing they'll be working with senior players of the character of Heung-min Son.

Full support in the transfer market. Full support in his team selection. And a playing group who have proved to him they're willing to sacrifice their own game to fit into a winning system. It's everything Mourinho lacked as a United manager and it's why he came out fighting post-Anfield.

At Old Trafford, you always had the impression Mourinho was acting on his own. Those in and around the club always keen to quietly distance themselves from him. But at Spurs, it's the opposite. Marking Klopp's card this week wasn't about him, but about his players and offering them an edge - no matter how small - when the return fixture arrives later in the season: You were the better team; They did try to get you sent off. And I'm angry about it - on behalf of you.

It's typical Mourinho. And it's always been there. It just took the right club, the right board and the right group of players to bring it all out again.