Rashford the sulk? Why it's much worse for Man Utd's struggling striker

COMMENT: A strop? A sulk? If only it was that easy. Those making such claims actually flatter Marcus Rashford. The problems besetting Manchester United's homespun striker run far deeper than some wobbler...

For now. As it stands. It's a write-off. This campaign for Marcus Rashford can be filed away. With no preseason. With the decision to take surgery after the season's kicked off. It was always going to be fantasy calcio that Rashford would hit the ground running upon his return.

But it's actually been worse than anticipated. There's been no consistency from him. And we're not talking game-to-game. He's barely put a decent half-hour of football together. The odd five minutes here. A goal to get the fans in the press going there. But what he's produced is nowhere near what's expected from a Manchester United player.

Ole Gunnar Solskjaer gave warning as Rashford's rehab from shoulder surgery reached it's final straight in October. The now former United manager going public with the consensus inside Carrington: Rashford had lost his way. He'd lost his focus. Not only with the work he was doing off the pitch, but the decision of his to choose England and the Euros over getting his shoulder cleaned up at the end of last season. His football would suffer. He was warned as much. And Solskjaer, more in hope than expectation, urged Rashford to knuckle down.

"Marcus has done some remarkable and fantastic things, but now he maybe needs to prioritise his football."

It was typical Solskjaer. A bit of wisdom. But no demand. The ball was in Rashford's court. Just as it was in May when the timing of the surgery was being actively discussed. Rashford and his minders, whom instantly went running to the press to make clear how upset they were with Solskjaer's comments, chose country over club. Then post Euros, they doubled down. Management encouraged Rashford to delay surgery and do preseason with the squad, but he went the other way. After three weeks off in the Turks and Caicos Islands, Rashford returned to Carrington deciding to have the op. 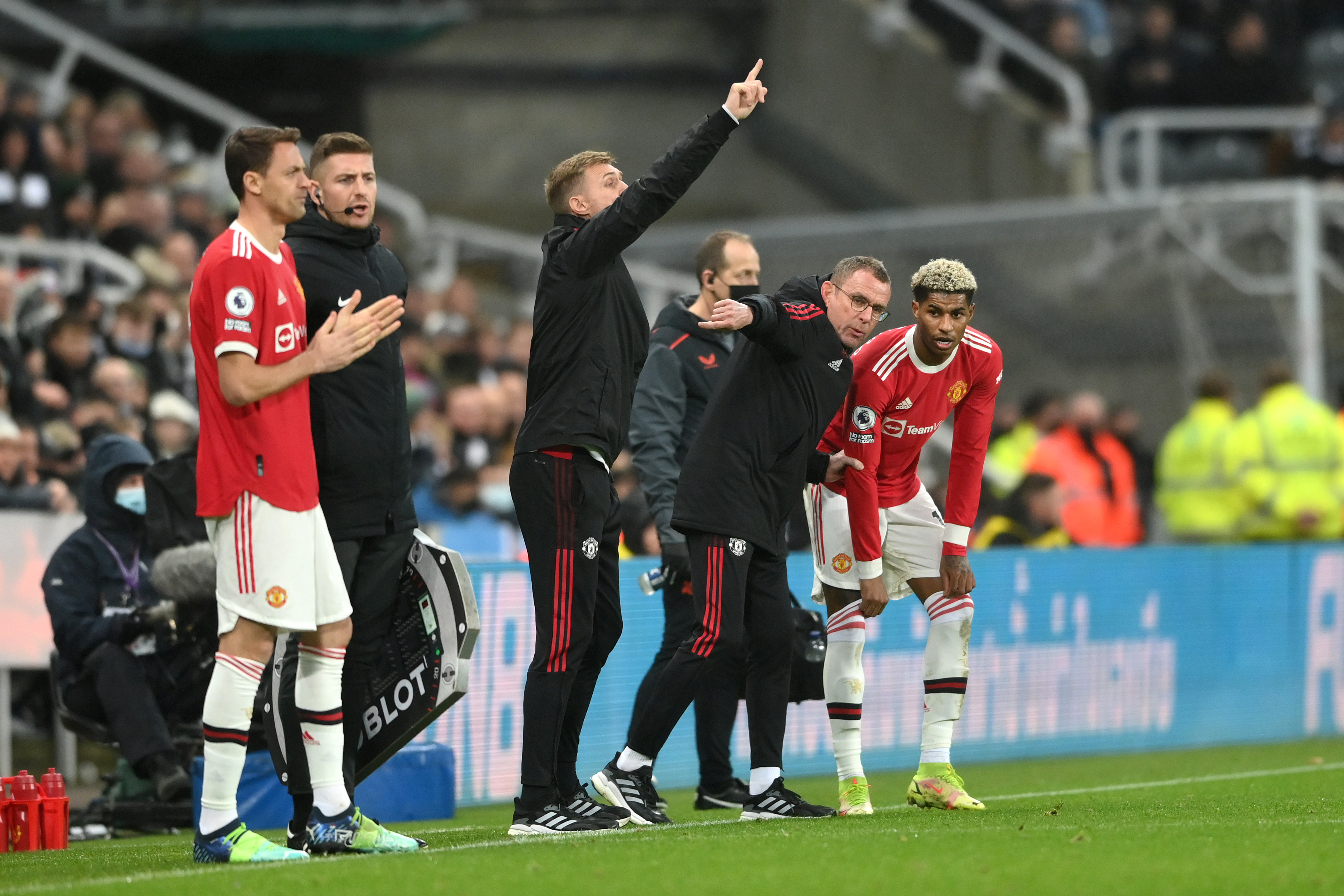 Rashford in conversation with Rangnick

Since October, Rashford has been back in action, though you wouldn't know it. He's been an afterthought. The headlines he's made solely from what he's done off the pitch, more than anything on it. And that includes his latest social media post on Saturday.

For this column, a response wasn't warranted. Indeed, it came out of the blue. No report namechecked Rashford as one unhappy with Ralf Rangnick's methods. His name has never been put forward as a source of unrest towards the caretaker manager. But he still thought it was his role to push back. Not on behalf of the team, mind you, but for himself.

"We've all been disappointed with recent performances and we've been as disappointed with the news coverage questioning our commitment to not only the manager and the coaching staff but the club," the forward posted online. "I have endless respect for both and I'm looking forward to bettering my game under the staff at Manchester United.

"I'm not sulking, I'm not unhappy, am I disappointed in some of my recent performances? Of course I am. I'm my own biggest critic.

"It's been a tough start but I'm determined to prove my worth. My dedication and desire to be here should never be in question. I love this club."

'I', 'I', 'I'. Again, no scribe was nominating Rashford as an agitator (they wouldn't dare). Yet he still felt the need to speak out... if only to defend himself.

To be fair, it was honest - though unintentionally so. He's right. The problems Rashford is having on the pitch has nothing to do with attitude. He hasn't downed tools because Rangnick is demanding more from him off the ball (though that has long been a glaring weakness in his game). He's simply hit a wall. He's struggling. And the question for Rashford and his hangers-on is simple: is this his ceiling?

Solskjaer, with that October warning, was again insightful. Rashford had a challenge ahead of him - not just to find a place in United's XI, but also to stay relevant for England. The great irony is by choosing the Euros over United, Rashford's status as an England player has never been under greater threat.

As Rashford and his team were shaping his social media post on Saturday, De Telegraaf in Holland were publishing an interview with Virgil van Dijk. Among the topics discussed were the defender's decision to pull out of the Euros as he worked his way back from knee surgery.

"One day, I sat around the table with the surgeon and my wife, Rike," recalled the Dutchman. “At that moment, I decided my focus had to be about preparing for the new season with Liverpool.

"Any small setback would push me further away from the European Championships so it was best to make that decision. I also thought about being with Holland's squad during the Euros, but even that didn't feel right.

“Further rehabilitation and the focus on my return to Liverpool was more important."

Of course, the contrast between the form of Van Dijk and Rashford couldn't be greater. It's a chasm. One put his club before all else, the other made his club second choice - twice.

But for Rashford's fans, this choice does offer something to cling onto. Maybe the source of these problems are due to a missed preseason? Maybe his struggles are all about a campaign that he was never prepared for?

Whatever the source, Rashford is struggling. A strop? A sulk? If only it was that easy. These form issues run far deeper than any claim of attitude problems.