Juventus were assisted by a baffling refereeing performance in their top four push, boozy Cagliari pulled off Serie A safety and Roma won the derby in the latest exciting round from Serie A.

Calvarese, worst refereeing of the season and now Juventus dreams of the Champions League.

It seemed over for Juventus, the outcome of their season in the last weeks seemed to be heading towards a sad and disappointing place in the Europa League.

On Saturday afternoon, however, Juventus managed to beat Conte's Inter 3-2 in a match heavily influenced by the shocking refereeing of Calvarese, who literally messed up with every choice he made during the 90 minutes of the match.

The most serious mistake was the one related to the penalty awarded to Juventus' winning goal: the referee, and only him, saw a foul by Perisic on Cuadrado, while the replay clearly demonstrated that he was the one who committed foul. In Italy there has been no talk of anything else since Saturday and discussions on the subject were heated, although more or less everyone agrees that Calvarese messed up badly.

Thanks to this unexpected result, Juventus is fully back in the running for the Champions League (thanks also to Milan's sensational draw with Cagliari), but in any case the Bianconeri will not be masters of their own destiny. To go to the Champions League, a victory will be needed on the last day, but also a favourable result from the competitor's matches.

Calvarese's refereeing, however, has caused discussion and will cause discussion again, especially because he risks deciding the championship's ending. 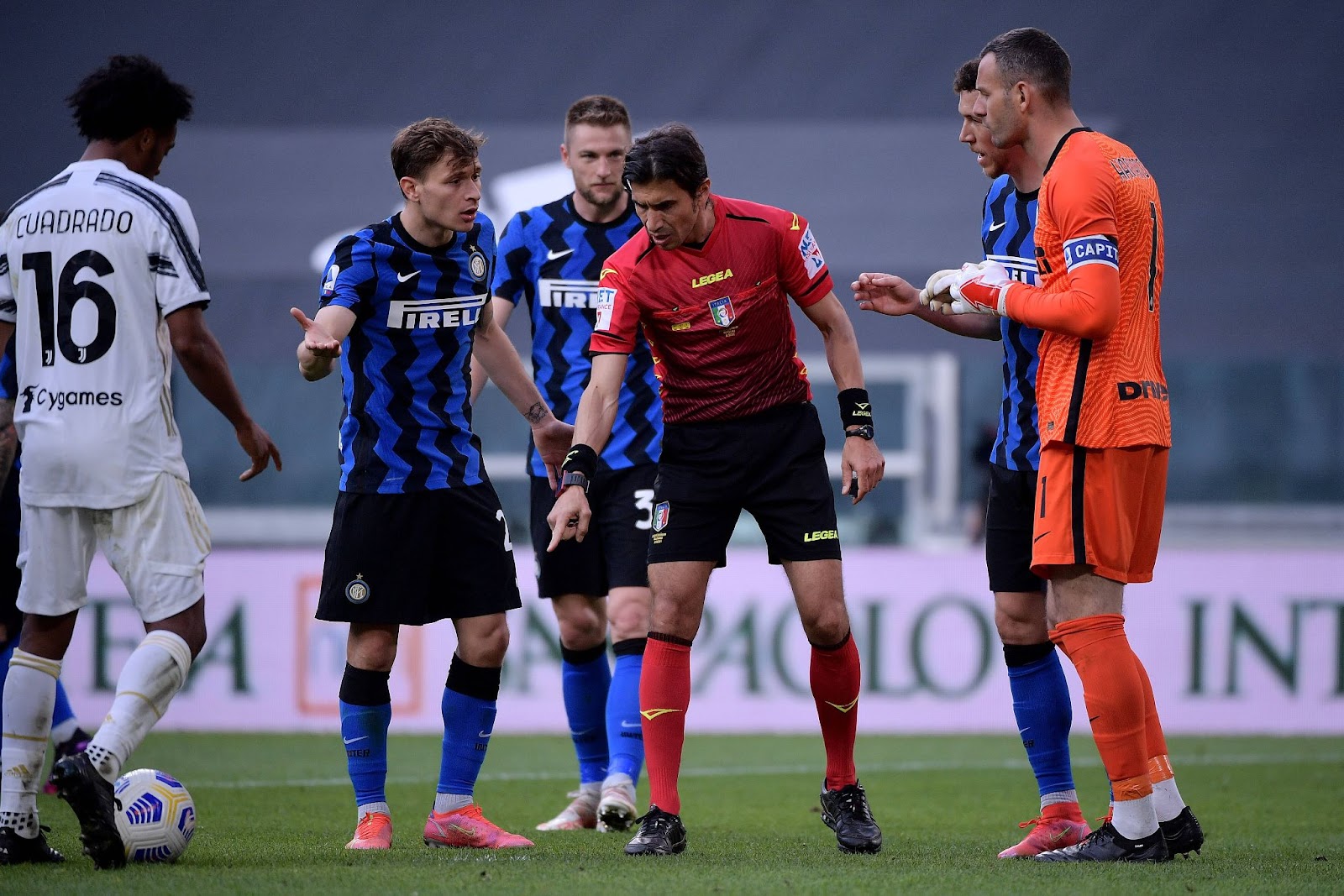 Calvarese in the thick of the action in Derby d'Italia

MATCH OF THE WEEK

Resounding results between Milan and Cagliari after a draw without goals.

Donnarumma was decisive to save the result and avoid a defeat that would have been dramatic and absolutely unexpected.

The Sardinians had already saved themselves in the afternoon (thanks to the result between Benevento and Crotone) and, according to Semplici, the Cagliari coach, had also celebrated with a few beers in the afternoon.

With their minds cleared thanks to the avoided relegation to Serie B, Cagliari players did not concede anything to Milan, who failed to bring home the 3 points and has now slipped into a very difficult situation: to snatch a place in the next Champions League they will need a victory on the last day, the problem is that the opposing team will be Gasperini's Atalanta, looking for a possible second place in the standings at the end of the season.

Seeing a team with no more goals honoring the competition in this way is always a good show, but Milan's week promises to be very long and complicated.

Roma plays with pride and wins the derby

Finally Fonseca's Roma won a head-to-head match and beat Simone Inzaghi's Lazio, thanks to the goals scored by Mkhitaryan and Pedro.

It was a proud and courageous performance by the Fonseca boys, who conceded nothing to their opponents and played to win from the first to the last minute.

A superb performance by Edin Dzeko, finally, in one of the few great displays of this season. At the end of the match the whole team gave Dzeko a standing ovation and many fans thought it could be a goodbye sign.

Dzeko's future at Roma is still to be written, also because Mourinho's arrival could make him want to stay next season, just as this season's finale is yet to be written. Roma are still not sure of seventh place in the standings and therefore participating in the Conference League next year.

But one thing must be said: Fonseca has finally won a big match. This result does not change Roma's season, which remains disappointing, but at least put a smile back on Roma fans' faces. 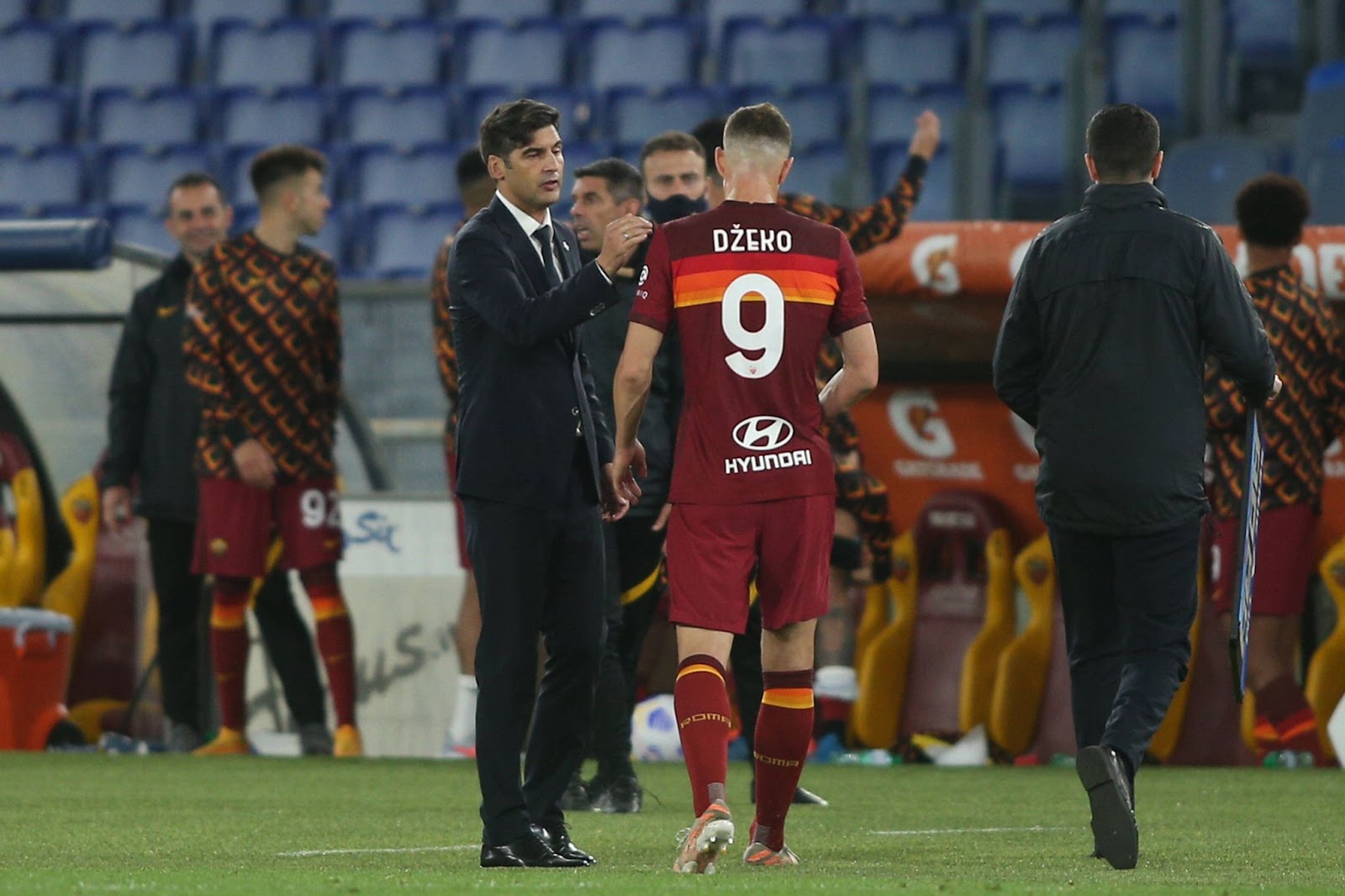 Napoli are still not sure they will be able to snatch a pass for the next Champions League, they will need another victory in the next round of the championship or a defeat for Juventus or Milan.

As always it is Lorenzo Insigne who guides the team, captain of the Azzurri and technical leader, once again scoring and once again decisive for the result.

A goal, a crossbar taken from a free kick, another great performance against Fiorentina. Now Insigne and his teammates need to make a last great effort in the match that will close the season, to return to the Champions League, waiting to understand who will be their next coach. Gattuso cannot yet claim victory, although his future should be elsewhere (there are a lot of rumors about Juventus, Lazio, Fiorentina ...), but his great work in a difficult and complicated season remains, between injuries and heavy absences.