AC Milan solidified their chances of a top-four finish while Juventus keep their hopes alive with a win over Sassuolo. Here is this week's Race for the Scudetto.

Ante Rebic and his first hat-trick for AC Milan

With the series of results that were ringed in the lower area of the standings it was easy to imagine a more compliant and less aggressive Torino, but what was absolutely impossible to predict was a score of 7-0.

Torino's coach, Davide Nicola, took all the responsibility for this abysmal result, saying he put too much pressure on this match. But in any case it was Pioli's Milan who celebrated, now only 3 points away from the return to the Champions League.

Despite Ibrahimovic's injury, the Rossoneri did not struggle to find the way to goal 7 times. Ante Rebic took the ball home, the former Eintracht Frankfurt striker scored a hat-trick (with takes him to 11 goals in the season).

Brahim Diaz also scored again, after scoring a very important goal to Juventus in the 0-3 for Milan, last weekend. Rebic seemed to be in great shape in this final stretch of the season and we are sure that the Milan fans are looking forward to seeing him next year. 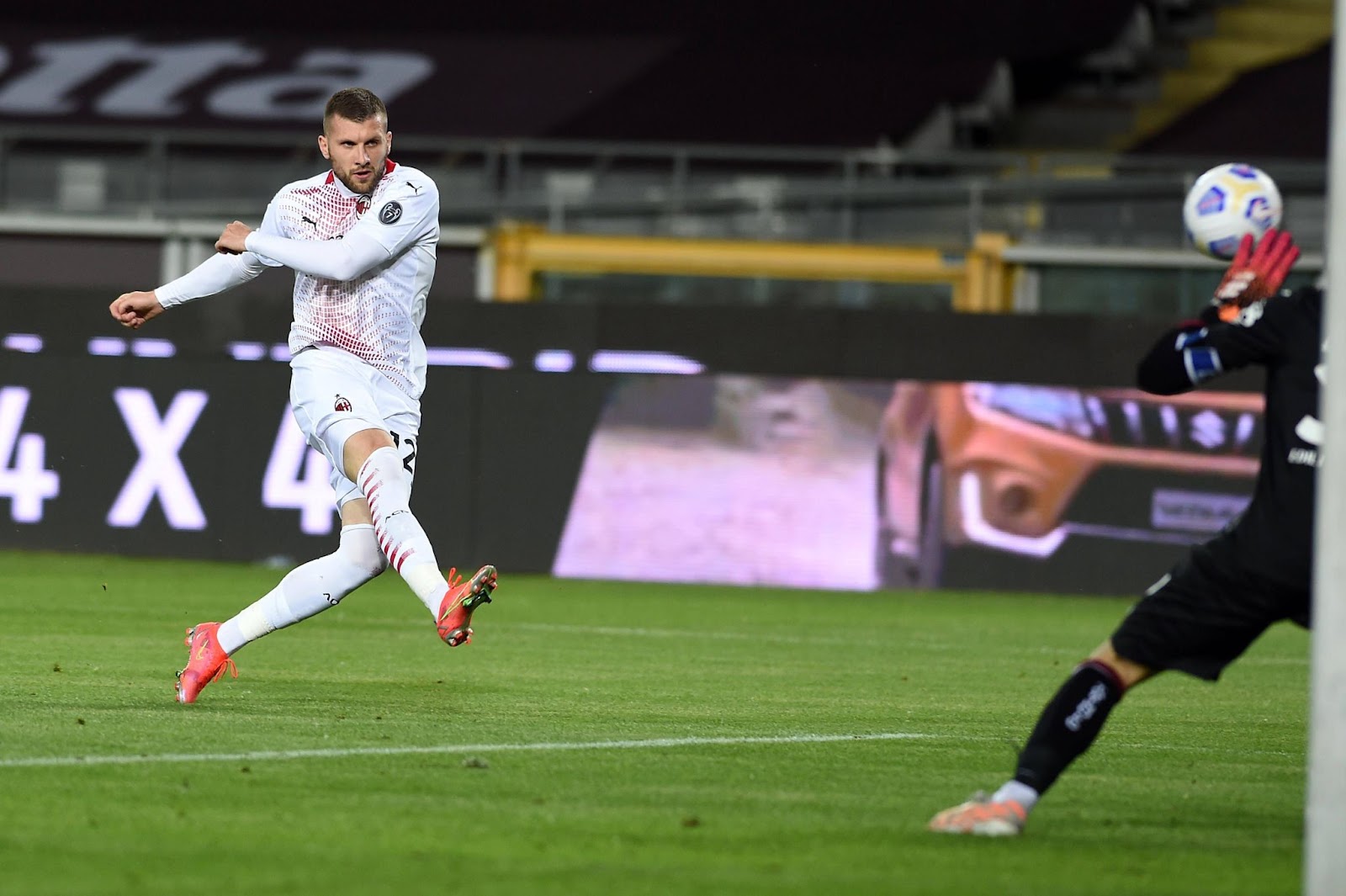 Rebic with one of his three goals

They have already been Italian champions for a week, but Conte's boys do not even leave crumbs to their opponents and crushed Fonseca's Roma with a clear 3-1 win, also playing with second lines and playing on the counterattack.

With the impressive pace held in the second round of the season, Inter are sailing towards 94 seasonal points, which would put Conte on the special list of coaches capable of winning more than 90 points in a season.

The Nerazzurri took the lead thanks to the goals scored by Brozovic and Vecino, taking advantage of the usual poor defensive phase of Fonseca's Roma. Solid in defence, fast on the counterattack, Inter's display on Wednesday evening summed up the entire season of Conte's boys.

The goal that closes the match after Mkhitaryan's illusory effort was scored by Lukaku. Roma were attacking with 8 players, the counterattack was quick and lethal. Conte, who has decided not to speak to the press anymore (apart from the club's channels), even found the time to argue with Lautaro Martinez. He entered the match in progress due to the injury of Alexis Sanchez and has been replaced before the final whistle resulting in very harsh words flew between the two.

TALKING POINTS OF THE WEEK

Paulo Fonseca hopes to give the fans a gift in the Derby, but the championship is a disaster

There is nothing to be done: Paulo Fonseca's Roma championship was and continues to be a real disaster.

Only 4 points (4 draws) in 11 direct clashes, another defeat against a big team in the championship, but luckily for the Giallorossi, Sassuolo lost to Juventus and thanks to this result they have managed, for now, to keep the seventh place in the standings, valid for qualifying for the Conference League.

For the fans, the season is every game more frustrating and the only joy is represented by the imminent arrival of Mourinho, who will be called upon to improve not only the defensive movements, but also the mentality of the team, made fragile and insecure by a sad and anonymous season.

At the end of the match Fonseca said that he hopes to win the derby (which will be played on Saturday) as a gift to the fans. To save face and to save the standings, but it won't be easy. The best story for Roma is undoubtedly that of Ebrima Darboe, Gambian midfielder born in 2001, who fled Africa to escape famine and a difficult life and ended up playing as a starter and with great personality in Serie A. 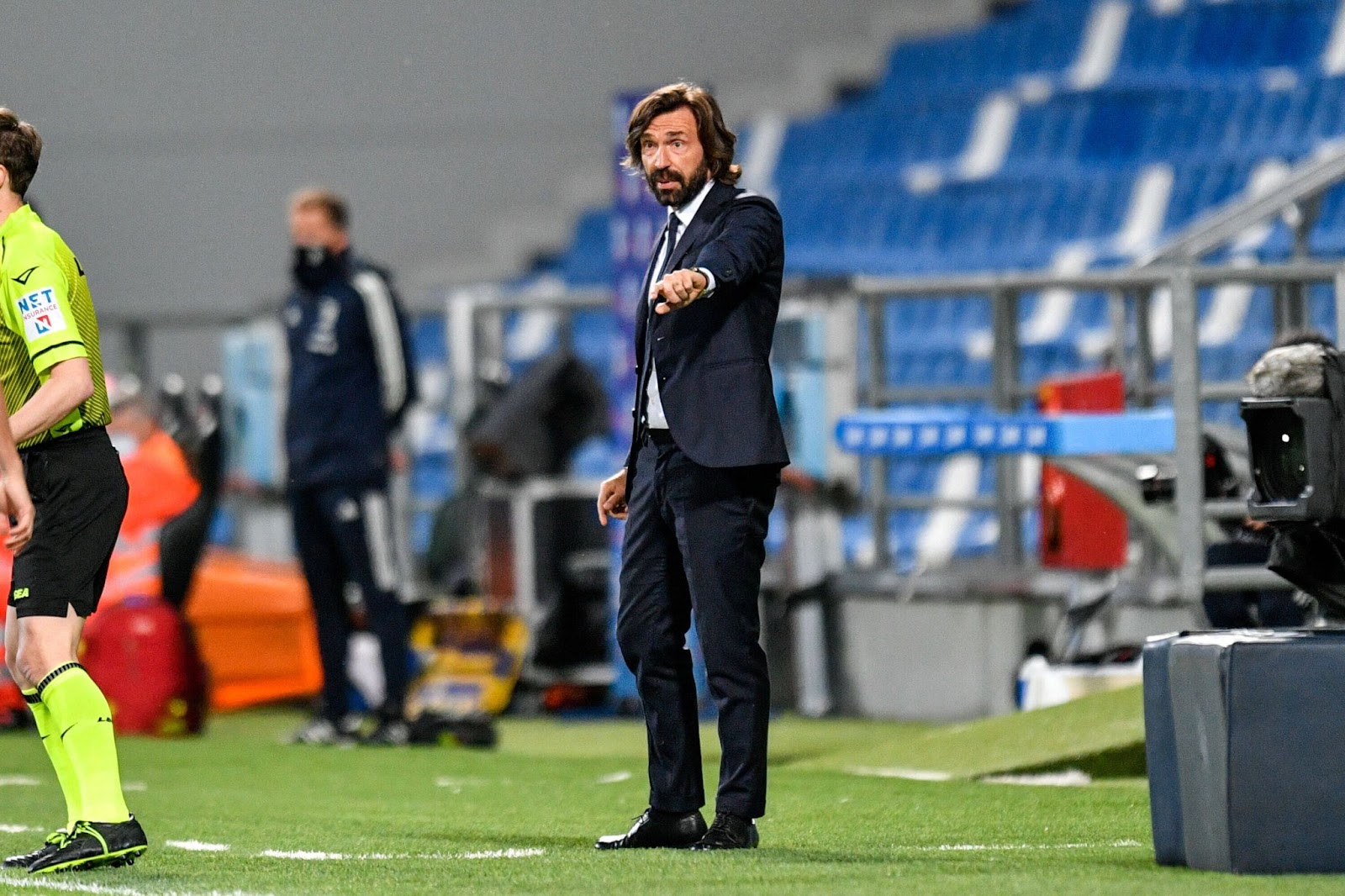 Andrea Pirlo on the touchline as Juventus defeated Sassuolo

Andrea Pirlo is at the end of the race, but continues to dream of a place in the Champions League. Time is running out and fourth place seems to be getting further and further away.

It is true that Juventus have returned to victory against Sassuolo, but it is also true that with the victories of Naples, Atalanta and Milan the place for the Champions League is further and further away.

To enter the top 4, Juventus should win the two remaining games and hope in the missteps of their opponents, but on Saturday afternoon the Bianconeri will face Conte's Inter, launched towards 94 points in the standings, with the former coach willing to play a dirty trick to his old company.

Ronaldo continues to score, but Juve have lost too many points during the season and by now the risk of playing only the Europa League, after 9 consecutive league titles, is increasingly concrete and credible. The news of the week is the farewell of Buffon at the end of the season, but his former partner Pirlo should also follow the same path. After the 0-3 against Milan, the club has seriously considered sacking him with three days to go. Pirlo will finish the season, then he will probably say goodbye.

Young Serbian striker Dusan Vlahovic is probably the man who saved Fiorentina. In a strongly negative and disappointing season for the Viola fans, the reason to smile has always been Vlahovic, who has scored 21 goals over the season.

In the goalless match between Cagliari and Fiorentina he was unable to score (also because there were no shots on goal in 90 minutes), but in last weekend's match Dusan scored a very important brace against Inzaghi's Lazio.

The ease with which Vlahovic finds the way to the goal is impressive, considering the young age and the difficulties of the Viola team and it is for this reason that the president of Fiorentina, Rocco Commisso, is setting a prohibitive price to let him go.

There is talk of an evaluation that oscillates between 60 and 80 million euros which is a frightening figure and unlikely to be within the reach of some Italian clubs (Roma and Milan had shown themselves interested). While waiting to discover his future, Fiorentina fans will continue to enjoy this extraordinary striker.