Shanghai Shenhua will allow Ighalo to stick with Man Utd if...

Van Gaal: Man Utd did not buy one player I asked for

Liverpool ahead of Newcastle as Napoli slash Koulibaly price

PREVIEW: How Arsenal must set-up to stop Valencia

Last Thursday, Arsenal won 3-1 at home to Valencia to put themselves one positive result away from a Europa League final. However, their semi-final clash with the La Liga outfit is far from over.

Not only did the Spanish side get an away goal to take home with them from the Emirates, but they could so easily have scored more. And, as shown with Liverpool's stunning come-from-behind 4-3 aggregate victory over Barcelona in Champions League action on Tuesday night, nothing is guaranteed after one leg of a two-leg tie.

It's also worth noting just how poor Arsenal's away form has been this season – in the Premier League they have won six, drawn four and lost eight of their 18 matches on the road. To contextualise this, they would be closer to a title challenge than a top-four fight had their away record been anything like their form at home.

Unai Emery will need a rare solid team performance away from London if his side are to successfully negotiate this Thursday's second leg with Valencia. Here, we at Tribalfootball assess how his team should line up with this in mind.

Without doubt the most peculiar aspect of last week's first leg between the two teams was the way Valencia shaped up. Marcelino set his team up in a 3-5-2 or 5-3-2 shape that essentially matched Arsenal's formation on the night. This was a major break away from the Spaniard's preferred 4-4-2, which might have been an indication of the respect he has for his Premier League opposition.

The idea was perhaps to ensure good central coverage through sacrificing both wingers in favour of one extra central midfielder and another centre-back. However, if anything, it made Valencia more defensively disorganised.

Without the wingers, they had fewer players in their second line of defence. This meant it was harder for them to apply pressure as high as they might ordinarily, as they couldn't really cover the width of the pitch and press out wide as they would normally do. As a consequence, they were played around and forced deeper.

On top of that, Valencia's central defence did not look entirely comfortable as a three. Gabriel Paulista, Ezequiel Garay and Facundo Roncaglia struggled even when defending their own penalty box, as was shown for Arsenal's second goal on the night – Roncaglia was separated from the other centre-backs by Alexandre Lacazette's movement, and he was then beaten 1v1 in the air by the Frenchman after a simple cross in from the left-hand side.

That goal encapsulated the problems caused by Marcelino's change of shape. Not only were they unable to close the ball out wide as they would in their usual 4-4-2 line-up, but they were too disorganised in central defence to deal with ensuing crosses.

Arsenal, and Emery, can expect Valencia to learn from their mistakes and revert back to their favoured 4-4-2 – a system they have used 47 times in 49 competitive games this term – for the second leg.

SPANISH TIKI-TAKA? NOT SO MUCH

Spanish football has been associated with possession dominance thanks to the style of the national team in recent years. However, a closer look at La Liga reveals a more defensive identity is proving increasingly popular and effective.

Have a quick look at the table's top five, and the usual suspects are there: Barcelona in first, and Real Madrid in third. However, both are currently managed by pragmatists – Ernesto Valverde and Zinedine Zidane – who have often prioritised defensive organisation and giving their attackers freedom and space to counter with over the more positional attacking approach of their esteemed predecessors.

Beyond Real and Barca, La Liga's top five is populated by three devoutly non-possession teams. Diego Simeone's Atletico Madrid are second and average 49.3 per cent of ball possession, while Jose Bordalas's Getafe in fourth average the lowest in the entire league – a wonderfully minimalist 43.3 per cent. Just behind them in fifth are Marcelino's Valencia, who average 47.7 per cent.

All of these three teams use a 4-4-2, and all of them tend to cede the ball to the opposition. No, this is not the Premier League in the 1990s. Welcome to post-Tiki-taka Spain. 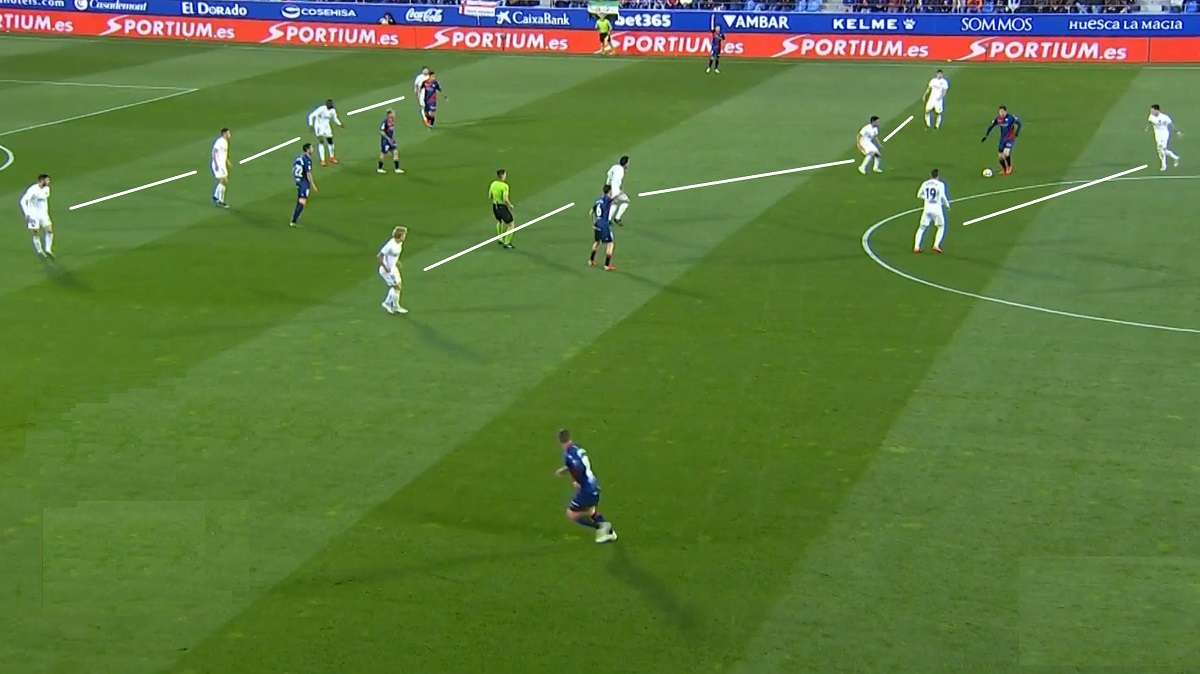 Valencia are right at the forefront of this movement. Marcelino's side are – last Thursday notwithstanding – extremely well-organised without possession, with compactness running throughout their setup: very rarely can space be found between their lines or in the channels between their players. Their defensive orientation is positional, meaning when one player goes to close the ball, his teammates re-align themselves to ensure coverage is provided.

Only five La Liga teams average less possession than their 47.7 per cent, while no team allows the opposition to play more passes in their half (12.02). In short, they keep their shape, press as a unit (dynamically – high, mid or low depending on the level of opposition and the situation), and leave little space for the opposition to play through.

This strategy works for them. Only three teams have a lower xGA (expected goals against) than Valencia this term – Atletico, Getafe and Leganes – while only three concede fewer actual goals – Atletico and Getafe again, as well as Barcelona. 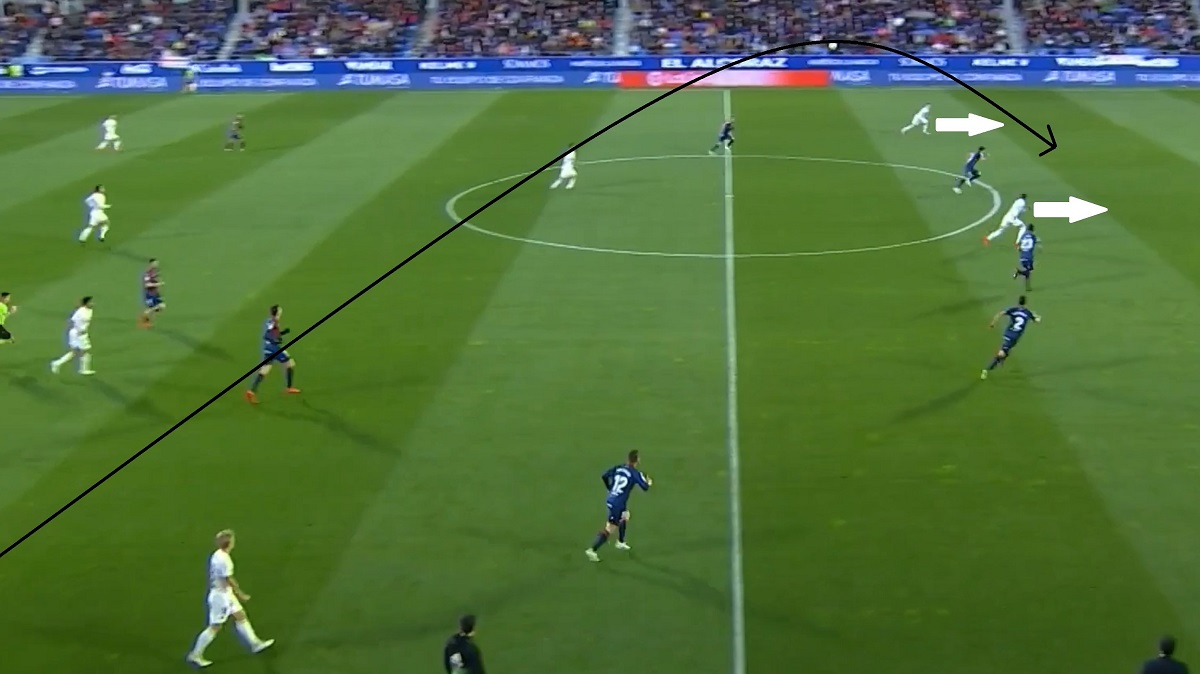 And, just to be clear, they do also score goals sometimes. Their main attacking threat comes in transition, when they use quick switches or through balls to get their pacey wide men and forwards, including Goncalo Guedes and Rodrigo Moreno, in behind the opposition back line (an example of this is seen above). When it comes to counter-attack goals, only Sevilla and Villarreal have scored more in La Liga than Valencia in 2018/19.

Pictures taken of Emery in training seemed to show his clipboard with a 3-4-1-2 shape drawn on it. This isn't exactly a huge reveal – it is, after all, the exact setup he used for the first leg and, given that ended in a 3-1 win, it's not surprising he might go with the same again.

However, given Valencia are likely to change back to their 4-4-2, Arsenal are likely to face new defensive dilemmas this time around.

The main issue regards how Arsenal press from the front. Up against the 3-5-2/5-3-2 system Marcelino chose to mirror Emery's, the wing-backs could close down their counterparts. But against a 4-4-2 in which both wingers are fast and often come inside, Arsenal's wing-backs will likely be forced back into deeper positions.

Considering Emery likes to have Mesut Ozil operating behind Lacazette and Pierre-Emerick Aubameyang, rather than dropping into midfield alongside Granit Xhaka and one other, Valencia's full-backs could potentially get free down the flanks and cause overloads in attacking areas. Alternately, Arsenal's central midfield two, tasked with extreme shifting from side to side to prevent aforementioned overloads, could lose their shape and create gaps for the Spanish side to play through more centrally.

Considering the above scenarios, the front two will be vital defensively. Both Aubameyang and Lacazette will have to remain engaged even when the ball has gone beyond them. If one presses the centre-back only for the ball to be played wide to the full-back, the near striker will have to track back and follow the runs of said full-back. Fortunately, these are roles both players have performed before this term. And, for those worrying about the lack of counter-attacking options this will leave, both are quick enough to pose problems against two centre-backs on the break.

Arsenal have a two-goal lead, but all it will take is for them to concede early on and the picture will change completely. Valencia, with less pressure to score, could then adopt their usual defensive pose, counter-attack and potentially strike that second, crucial blow. With such a precarious lead to sit on, Emery must ensure his side are – like their opponents – defensively well-drilled.