Prem tactics preview: How Chelsea can cause problems for dominant Man City

The Premier League is back in action and Manchester City look like they were never away. They returned with consecutive hammerings of Arsenal (3-0) and Burnley (5-0), boosting confidence ahead of a difficult trip to Chelsea tomorrow night.

Frank Lampard's side haven't been quite so electric, stuttering to a 2-1 win away to Aston Villa last Sunday. But with eight games left they will be determined to solidify their fourth-place position, potentially get closer to Leicester City in third, and cement their Champions League status.

Here, we at Tribal Football break down how the clash between Chelsea and City could go.

The latest fixtures for both teams gave a good impression of where they are both at as attacking forces. Both played against cautious defensive opposition, but their efficacy in breaking down these opponents differed drastically.

Pep Guardiola's men didn't give Burnley much of a look-in. They dominated the ball, with 72% of possession, and converted that into shots – 18 in total, with seven on target. Their possession dominance was a useful attacking tool, and it was also helpful defensively, restricting Burnley's opportunities to break out and get up the pitch. Ultimately, Sean Dyche's side got just two shots off, neither of which hit the target.

Phil Foden's long-range strike fairly early on was key, because it gave City a lead to build on and meant Burnley couldn't just sit in and defend their own box to secure a point. But there were also flashes of genuinely bright attacking play, both collectively and individually, that helped City seal the win.

They got good width, as well as plentiful options between the lines, while Riyad Mahrez was almost unplayable. The Algerian winger threatened constantly coming in off the right onto his favoured left foot, scoring twice and combining well with teammates. 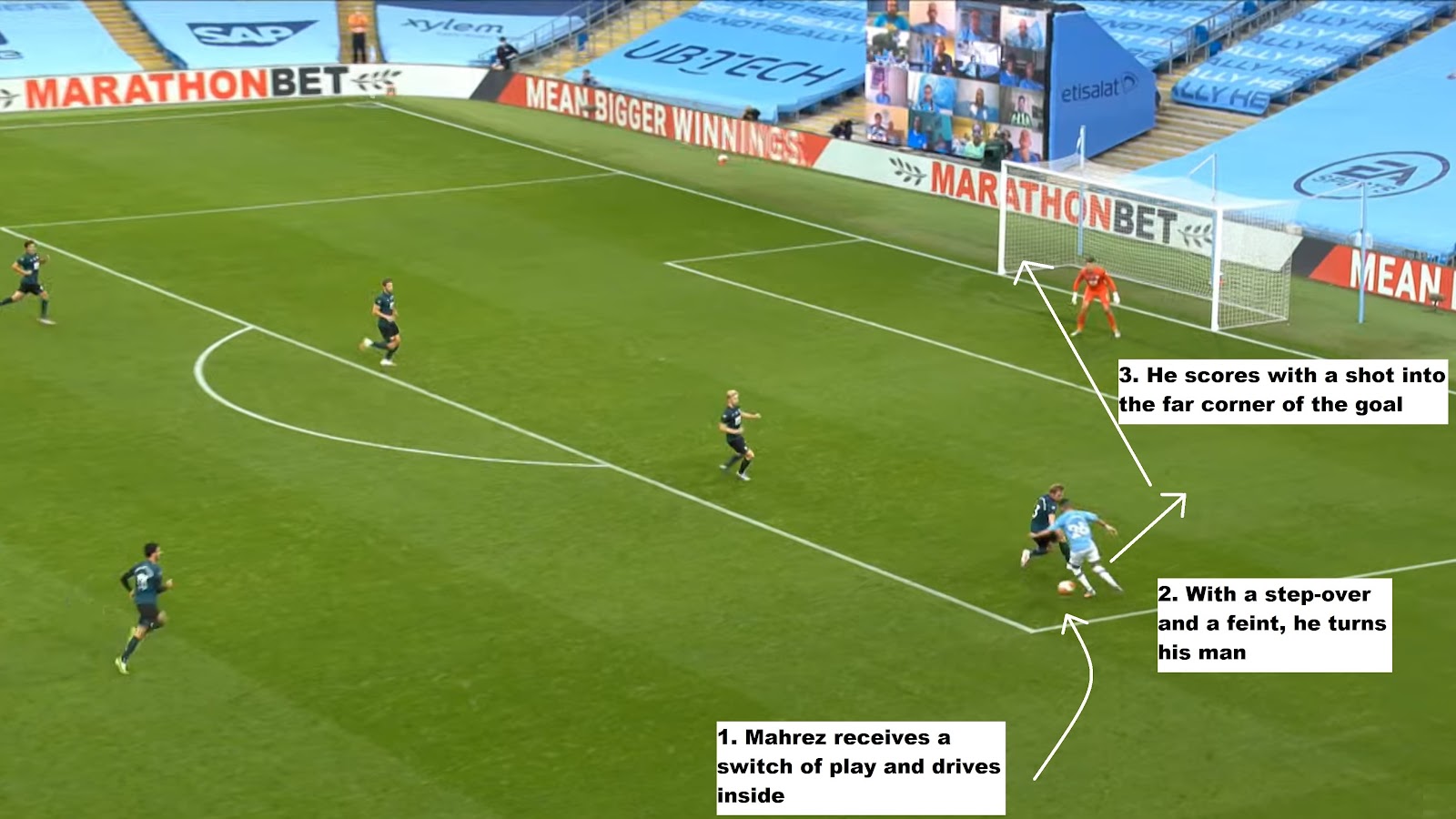 As for Chelsea, they had a real struggle opening up Aston Villa. Their attacking numbers were similar to those recorded by City against Burnley – 74% possession with 18 shots and six on target – but their first-half showing was turgid. Despite having all of the ball, they couldn't penetrate Villa's low defensive block.

Unlike City, they didn't possess much wide threat, and there was a lack of imagination aside from Mason Mount's driving runs. It took a Christian Pulisic finish off a hopeful Cesar Azpilicueta cross and a poor bit of defending from Villa to allow Olivier Giroud to turn and score off a cut-back for Chelsea to get the three points.

CHELSEA CAN LEARN FROM THEIR LAST MEETING

The two teams met last November in an open match that City eventually won 2-1. But while they lost on the day, Chelsea can take plenty of confidence from their play in that game.

In a fairly end-to-end contest, they frequently cut the reigning champions open in transition with quick, direct counter-attacking play. Willian was instrumental to most of it with his quick darting dribbles, while N'Golo Kante also threatened with breaking runs from midfield, one of which led to the opening goal. 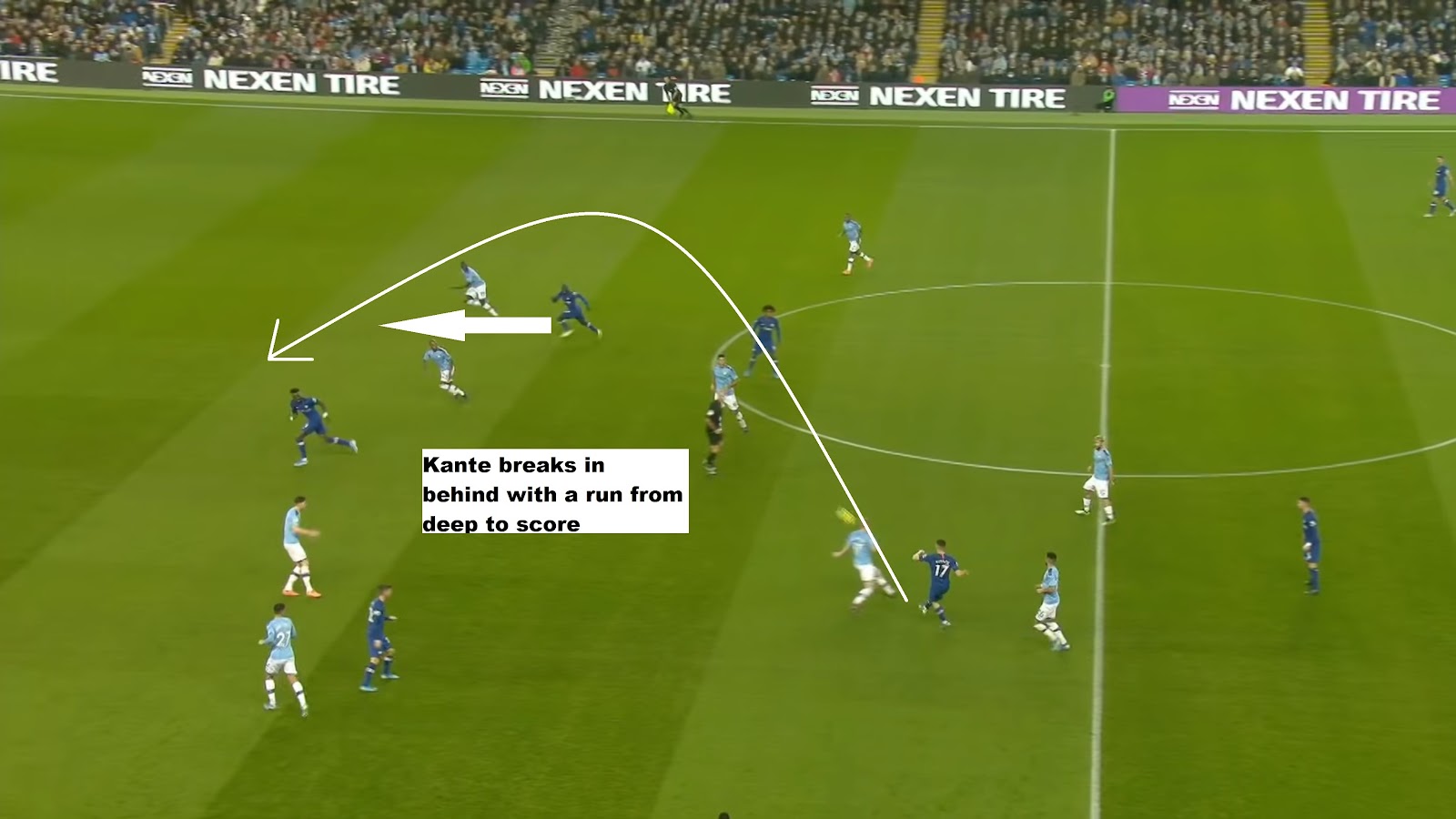 Guardiola still tends to have his side line up in a defensive 4-4-2 which Chelsea can play around using combinations out wide between the full-backs, wingers and No.8s within their usual 4-3-3 structure. They can also look to exploit space on the break as City often push two midfielders – usually Kevin De Bruyne and David Silva – quite high when they build attacks.

Lampard should avoid continuing the Ruben Loftus-Cheek as a winger experiment, which categorically did not work against Aston Villa, and pack his forward line with speed and directness to maximise attacking transition opportunities. He would also be wise to ditch Olivier Giroud for the more mobile Tammy Abraham up front, while bringing Jorginho back at the base of the midfield three can free up N'Golo Kante to make those forward runs that caused City so many issues in last year's clash.

Another tactical decision Chelsea may want to make is to play more directly to the frontline. Abraham has the height to make things awkward for City's centre-backs on long balls, while City's use of Fernandinho at centre-back leaves them lacking physicality in midfield to win duels and pick up second balls.

With a direct, counter-attacking approach based around a quick forward line, Chelsea can forget their slow, deliberate display against Aston Villa and cause problems against Manchester City.