Hoddle pulls apart 'sussed' Liverpool: Thiago will be great; but top 4 in danger

Real Madrid seeking to buy back Sergio Reguilon from Tottenham

Prem return: How rule changes will impact your team

This week the Premier League returns after a temporary suspension due to the ongoing Covid-19 pandemic. The first round of fixtures sees Manchester City welcome Arsenal on Wednesday before Manchester United travel to face Tottenham on Friday.

But while the football is back, not everything is as it was, with the International Football Association Board (IFAB) introducing new measures on substitutions. Where before teams could only make three subs, now they can make five.

IFAB explained that, "the temporary amendment…has been made as matches may be played in a condensed period in different weather conditions, both of which could have impacts on player welfare."

Player protection is the ultimate goal behind the rule-change, but there will be other effects. Here, we at Tribal Football offer a quick breakdown of what the new five-sub ruling could mean for Premier League clubs.

Already several players and managers of traditionally 'smaller' Premier League clubs have spoken out against the new substitute rules, with the general feeling being that it will aid clubs with deeper pools of talent.

"We've got extra subs now. I wasn't for it to be honest," Aston Villa manager Dean Smith remarked. "I suppose it benefits the bigger teams and helps those with bigger squads."

In an interview with the BBC, Sheffield United defender Chris Basham expressed similar concerns, saying: "I think the substitute's thing that has come in will affect us a little bit because we are not going to be as strong as the top six sides."

There is logic behind this fear. Clubs like Manchester City, with vast financial resources and big squads filled with expensive players bought from other teams, will now be able to utilise more of their player pool to try and win matches.

If, everyone being fit and available, Pep Guardiola picked his best line-up, he could now bring on, say, Bernardo Silva and Gabriel Jesus if he was chasing a goal. If that didn't work, he might want to add Leroy Sane and Ilkay Gundogan for some extra pace and creativity from deep, then finish off by adding fresh legs down the flanks in Joao Cancelo.

Teams further down the Premier League table, who tend to sit in and try to absorb pressure from the likes of Manchester City, defending in a low block and sacrificing possession, are even more likely to wilt late on when City can go to their star-studded bench and bring on another two players in an attempt to break down the block.

While the smaller squads can rightly fear what the new rule will mean for them, they may also benefit in another way themselves. Yes, the most talent-rich clubs can make more use of their resource advantage late on in games, but they also have to deal with opponents who can bring on more fresh legs to help them defend.

If a team chooses an ultra-defensive strategy and decides to renounce possession and counter-attack all game long, they can do so in the knowledge that when the final whistle is approaching and legs are tiring, they can bring on an extra two fully fit substitutes to help them see out the match. That might mean a new midfielder to help cover ground, or a new centre-back with fresh eyes and concentration. It may also mean a forward to bring speed up top when the starting attacker has run himself into the ground. 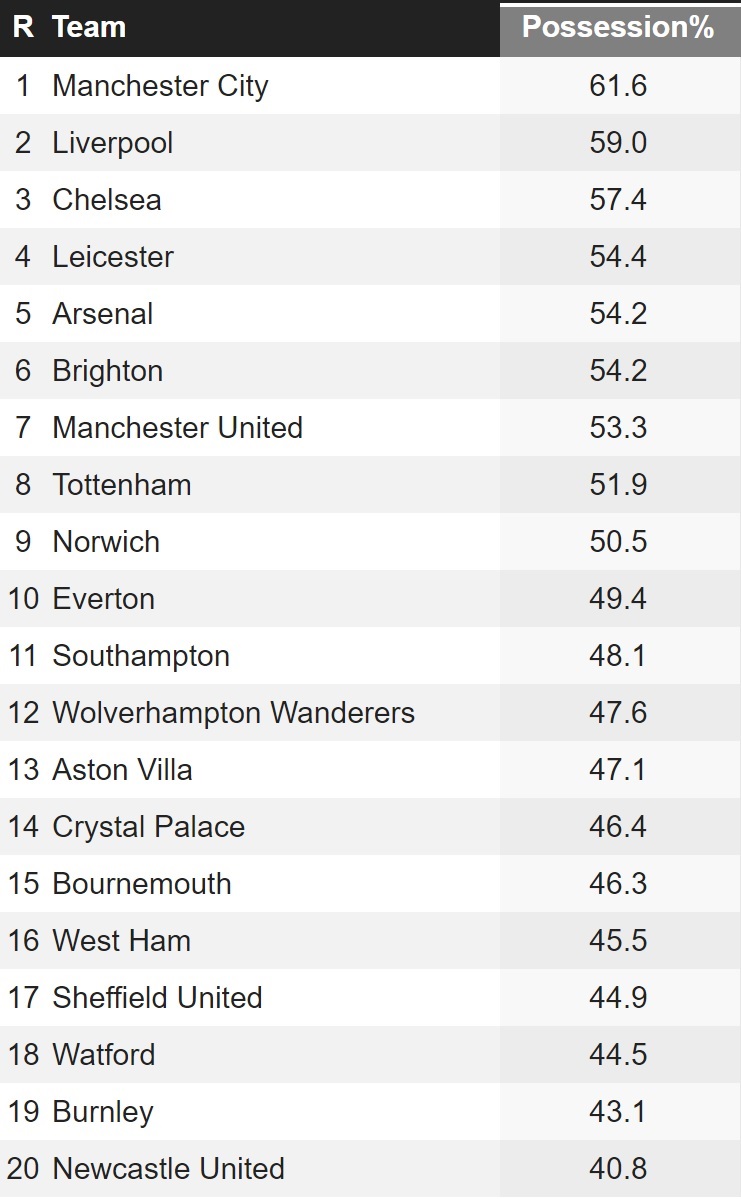 As the above WhoScored.com graphic shows, most teams near the top of the Premier League table dominate the ball, while most teams in the lower reaches average a minority share of possession. So the option to sub in more players gives those towards the bottom end of the table a chance to reduce fatigue or add pace up top in games where they spend large spells defending and counter-attacking.

During the course of a match, the line-up of a team can be impacted by various factors. Fatigue and injury can force a substitution, while yellow and red cards can encourage changes to replace the carded players.

All of the above factors are moves the average manager would prefer not to have to make, as they take away their control of the game strategy and eat into – or completely use up – the three substitutions permitted. Now, with an extra two subs allowed, managers have more room for tactical manoeuvre.

Even including – in a bad scenario – three substitutions for fatigue, injury or players being carded, managers will still have two more subs to use. They can potentially be utilised to completely change shape, or to make more subtle modifications in certain areas – adding an extra striker, or bringing on an attacking midfielder for a defensive midfielder.

With greater scope for mid-game tactical shifts, an increasing opportunity to harness the depths of a strong talent pool, and a chance to use more fresh players from the bench, the new substitution rules have the capacity to completely alter the course of this Premier League season.