COMMENT: Top of the league. Playing the best football of his career. For his manager. For his teammates. For the club. This wasn't supposed to happen. But it has and all of a sudden Mino Raiola has found himself in a very embarrassing and humiliating position...

Paul Pogba. The form. The goals. The drive and support of his Manchester United teammates. Now clear at the top of the table. And all under their manager, Ole Gunnar Solskjaer. Pogba's agent just did not see this coming.

We stated a couple of weeks ago that this was personal. Raiola sniping at Solskjaer. At his management of Pogba. At his tactics. Even his apparent youth. It was personal. You could even go as far as strategic. A plan to undermine. To destabilise. And to be fair, whatever the motivation, it was done from a position of strength.

Bundled out of the Champions League. Barely a threat for the top four. And smarting from the rejection of Borussia Dortmund pair Erling Haaland and Jadon Sancho. For many on the outside, Solskjaer looked out of his depth - at least at the level United were aspiring to reach. So the opportunist took his chance. Mocking the Norwegian. Ridiculing him. Not in any response, but simply because he could.

"Ole Gunnar Solskjaer is a good kid, but he was wrong when he said that Erling looked like Romelu Lukaku," declared Raiola, just weeks after that claim - on the eve of defeat at RB Leipzig - that Pogba would be leaving this season. "It would be better if Solskjaer thought about how to get Paul Pogba to play like a champion, instead of talking about Haaland."

That was said at the beginning of December. Raiola confident he could place his client at Real Madrid or Juventus with little fuss. And more importantly, convinced it would be a step (or more) up from the fallen giant that wasManchester United.

But today? Today Pogba will be second guessing Raiola. There's no doubt about it.

United's cycle is now in it's ascendancy. The youth of the team. The stability granted the manager. The two-plus years of putting foundations in place. Beyond what happens over the second-half of the season, United aren't going away - even without Pogba. 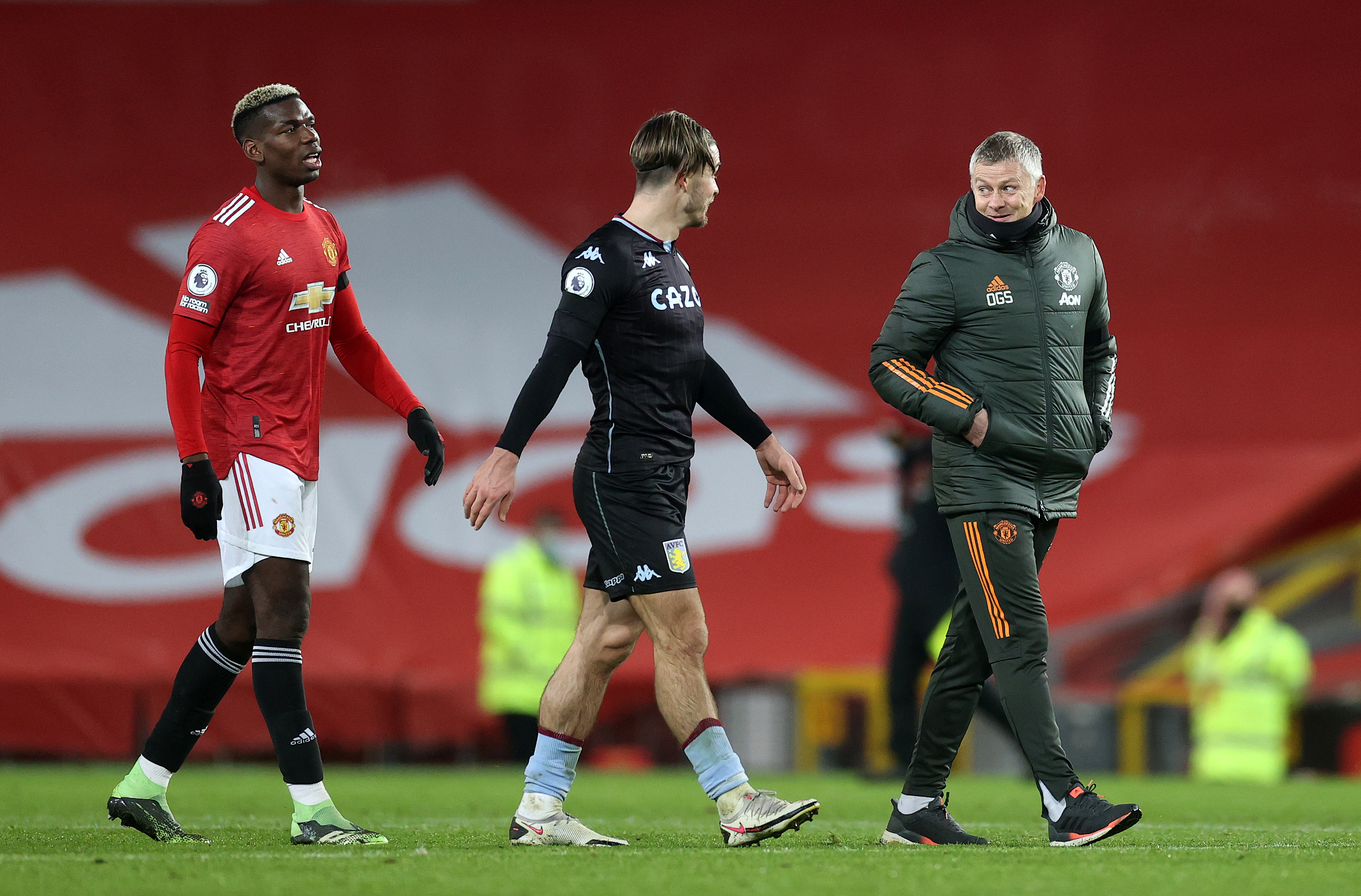 Solskajer shares a word with Grealish - with Pogba within earshot

In contrast, the two options Raiola has put in front of the Frenchman do not exactly carry the same appeal. Real Madrid could part with coach Zinedine Zidane at the end of this season. Sergio Ramos is considering walking away. And Raphael Varane has plans to hand in a transfer request. Luka Modric, Toni Kroos, Karim Benzema are all on the wrong side of 30. This is a team at the end of it's cycle - and it still hasn't hit bottom. The reality will be very different from what Raiola will be selling.

And the same can be said of Juventus. Again, clearly a team now in transition. Under a rookie coach in Andrea Pirlo. A veteran playing staff. With big question marks over the younger talent the club has brought in. There's a real danger Juve won't even qualify for the Champions League next season.

But these are the options in front of Pogba. And make no mistake, there remains a motivation inside United to sell. As happy as Solskjaer is with his No6. As good as the relationship is between manager and player. Raiola is a problem. And as much as Solskjaer has managed to set aside emotions when it has come to being let down publicly by the agent - and his client - he hasn't forgotten.

It's why there's no sudden push to reopen contract talks. A deal now well inside it's final 18 months. If Solskjaer saw Pogba as a long-term option - and felt the feeling was mutual - we'd be getting those little messages via confidants in the press about a wish to restart negotiations. Instead, we now know nothing will be discussed until June. And as this column has learned, United feel in a strong position. Directors are again fielding calls from the agents of major stars. Scouts are now finding representatives answering their text messages.

With United top of the league and playing the football they are, the club is again one that the best want to be associated with. Dayot Upamecano, the RB Leipzig defender, is now willing to listen. Bayern Munich's English teen Jamal Musiala has had his head turned by a simple enquiry from a United intermediary. And the feelers have been sent out towards United through Varane's camp. The agents. Their clients. They see a United on the rise - and they want to be part of it.

Whether this United will include Pogba long-term is another matter. Raiola is a problem. You only need consider Sergio Romero's situation for confirmation. Solskjaer choosing to freeze out Raiola's client in preference to his signing from Southend United, Nathan Bishop. The Argentine has long played his last game for the club.

Solskjaer likes Pogba. As a player. As a person. He has been happy to count on him inside the club: “I talk openly and directly with Paul. I'm not going to tell anyone what my advice to him is but I have always had a good relationship with him.

But that's not to say things are about to change. And for this column, for now, that's how it should be. Indeed, United already have their replacement lined up in the form of Jack Grealish, the Aston Villa captain. United are strategically turning on the charm offensive, Rio Ferdinand talking up the England midfielder last week ahead of an endorsement from Bryan Robson. Both legends of the club declaring they want to see Grealish in an United shirt next season.

So the plan is in place. It has been for over six months. Only now it could be a case of Pogba fighting to stay a part of United, rather than trying to engineer a way out. Particularly given the alternatives of today's Juve or Real.

And it would mean public humiliation for Raiola. But that's only if Solskjaer gives him the chance. And given his admiration for Grealish, United and their manager are now in a position of strength. For Paul Pogba's agent, this wasn't supposed to happen...