Pochettino vs Rodgers: Who is better suited to become permanent Man Utd manager?

Following the sacking of Ole Gunnar Solskjaer, Manchester United are on the hunt for a new manager. Two managers who have emerged as primary contenders for the vacancy are Mauricio Pochettino and Brendan Rodgers. In this article, we at Tribal Football will evaluate the suitability of both gaffers in terms of their results, achievements, tactical preferences, and team-building approach.

Pochettino began his managerial career with Espanyol, where he had finished his playing career. At the time he arrived, midway through the 2008-09 season, the club was in La Liga's relegation zone. By the end of the campaign, however, he had guided them to 10th and mid-table safety. Along the way, he oversaw a stunning 2-1 away victory over rivals Barcelona. Espanyol have failed to record even a draw in their subsequent 12 league meetings with Barca at Camp Nou.

In his third year in charge, Pochettino took Espanyol to eighth place. It was only their second top-half finish in a decade. That, however, was the high point. The next season they finished 14th, avoiding relegation by just five points. Ultimately, Pochettino was sacked midway through 2012-13, with Espanyol rock bottom of La Liga after 13 games. His contract was terminated by mutual consent, and the club ended up surviving relatively comfortably under his replacement, Javier Aguirre.

Two months after his departure from Espanyol, Pochettino got his first job in England with Southampton. Replacing Nigel Adkins, survival was achieved before a huge upturn in his first full campaign. He led the Saints to eighth place with 56 points, their best position and points total in the Premier League era. That success was enough to convince Tottenham, who appointed him in the summer of 2014. 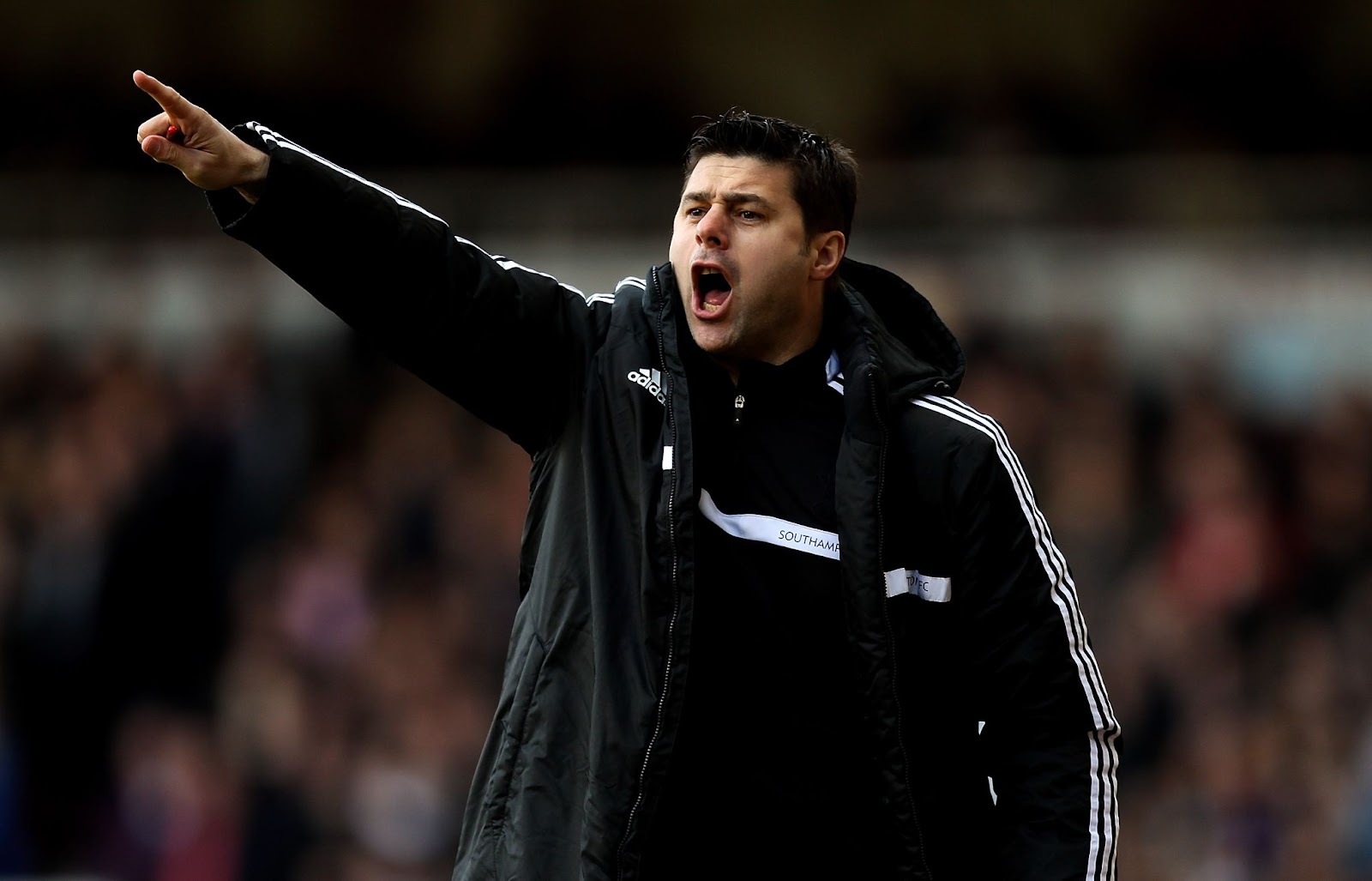 Pochettino in charge of Southampton in 2014

It was with Tottenham that Pochettino truly established himself as one of the world's best managers. He built a team effectively from scratch, turning the club into a genuine force in English football. There were three consecutive top-three finishes, something Spurs previously hadn't achieved since the 1960s under the management of club legend Bill Nicholson. There was also a run to the Champions League final in 2019, with wins over superb Manchester City and Ajax teams along the way.

A prolonged run of bad form in 2019 led to Pochettino's sacking. After a year out, he returned to management with Paris Saint-Germain. Despite failing to win the league in his first year, he did secure the cup, overseeing victories over Lille and Monaco to seal his first and only major trophy as a manager. Currently, PSG are well clear at the top of Ligue 1.

Rodgers started his managerial career two months before Pochettino, with Watford in the English Championship. He guided the Hornets away from the relegation zone and to a comfortable mid-table finish, before leaving after six months to join Reading. Appointed in the summer of 2009, he was sacked by December with the club sat 21st in the table. They had finished fourth the season prior, and ended the 2009-10 campaign in a more respectable ninth under leadership of Brian McDermott.

Rodgers rebounded quickly, taking over at Swansea. Building on the foundations laid down by Roberto Martinez and Paulo Sousa before him, he took the Welsh club to third place, victory in the play-offs and promotion to the Premier League. That was followed up by an 11th-place finish and comfortable survival.

Appointed Liverpool manager after an excellent two years with Swansea, Rodgers led the club to the verge of the title in 2014, only to fall away from contention in the final weeks of the season and finish second. Still, that was the club's best league performance for five years, and it would take another five years for Jurgen Klopp to better it. However, despite one positive season, Rodgers failed to win a trophy and endured poor European results, including a Europa League defeat to Besiktas and a Champions League group stage exit. He was sacked after a bad start to the 2014-15 campaign, with his team sat 10th in the league table. 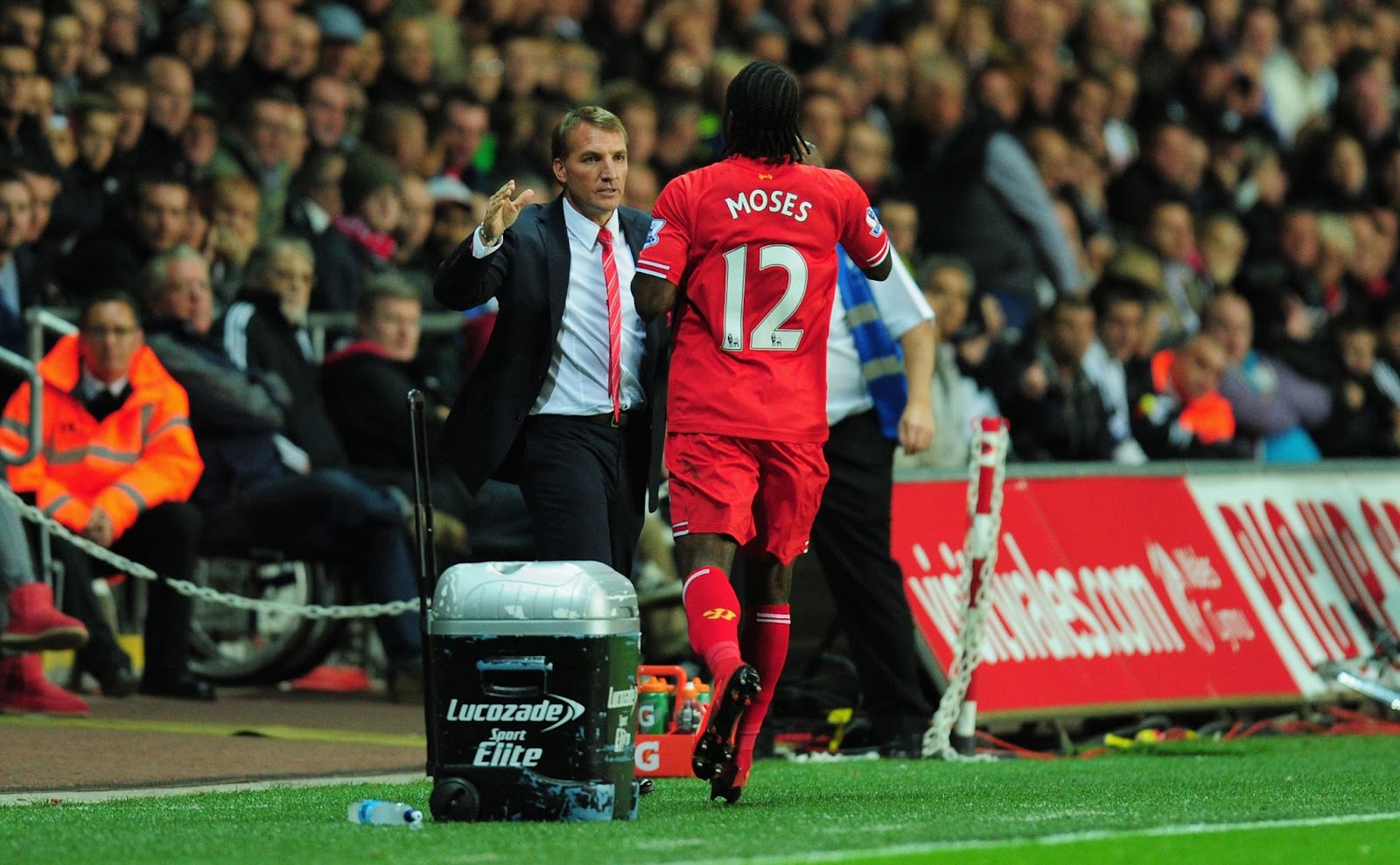 Rodgers in charge of Liverpool in 2013

Rodgers then went to Scotland, and Celtic, where he won every domestic trophy possible and got the club back into the Champions League group stages for two straight seasons. His first campaign was spectacular, as Celtic went unbeaten in 47 domestic games, winning the treble. With his reputation restored, Rodgers returned to English football with Leicester towards the end of the 2018-19 season.

His first two years with Leicester saw a significant improvement in the team's points totals and league positions, as well as an FA Cup win. This was Rodgers' first major trophy in English football. At present, however, the Foxes sit in a disappointing 12th-place league position.

Throughout his career, Pochettino has built teams that press high. This was something he ingrained fairly quickly at Espanyol, and high-pressure tactics underpinned the aforementioned surprise win over Barcelona. The 4-2-3-1 system, with a well-organised back four that tries to play offside, are also running themes. Yet, while Pochettino's preference is to play out from the back, he isn't afraid to mix things up when necessary. The semi-final win over Ajax that saw his Tottenham side into the 2019 Champions League final was built on long ball tactics after the introduction of target man Fernando Llorente. 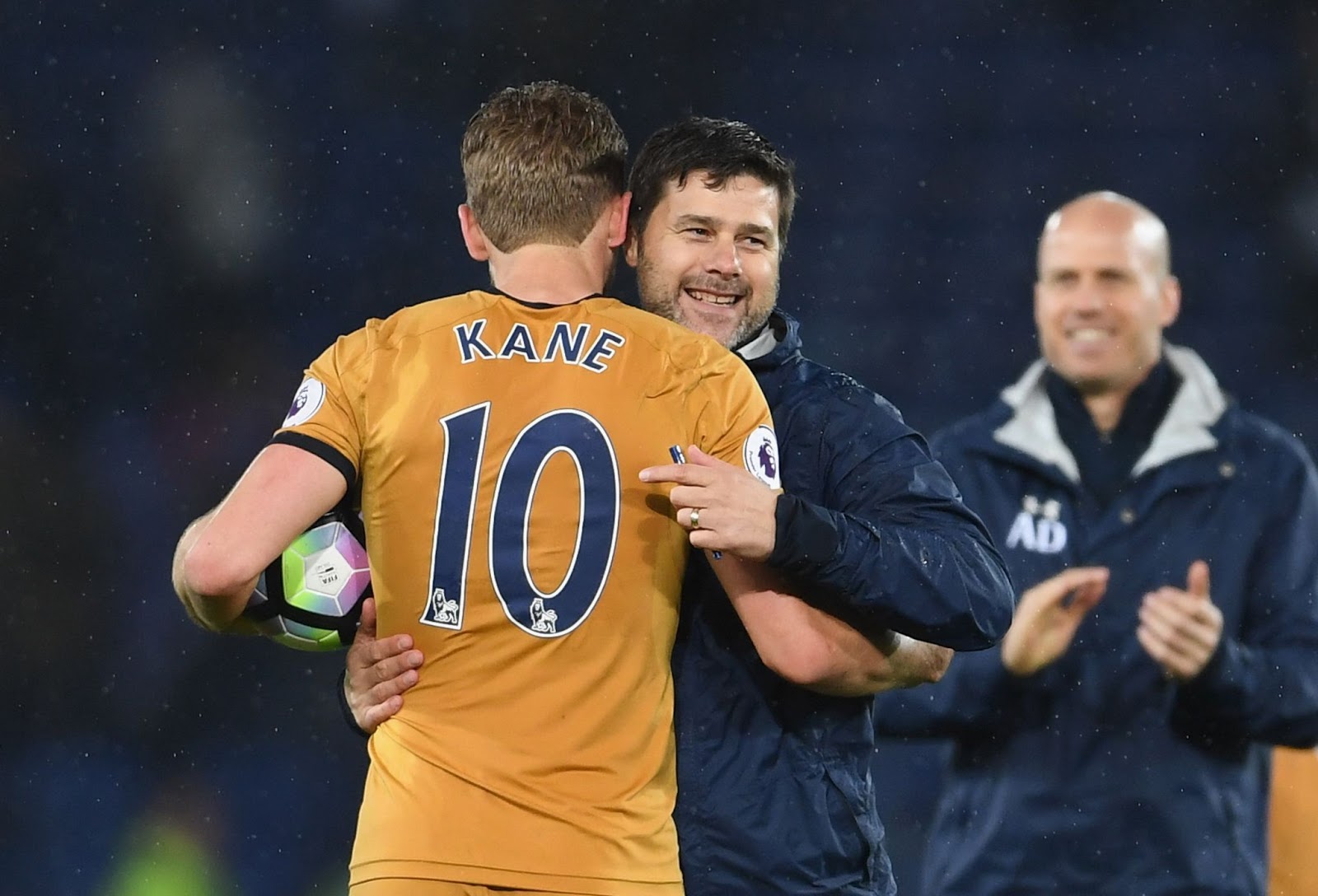 The high-pressing approach Pochettino favours calls for high levels of fitness and a strong work ethic, and he is renowned for punishing training sessions. He is not regarded as an autocratic coach, but he does ask a lot of his players, and this was reportedly part of the reason behind the end of his Tottenham tenure. Still, that took five years to become an issue, and Pochettino has shown an ability to build long-term relationships with both players and supporters. He is happy to give youth a chance - he brought in the likes of Victor Ruiz and Javi Marquez at Espanyol, and oversaw the development of Eric Dier, Dele Alli and Harry Kane at Spurs.

During his time at Swansea, Rodgers favoured a short passing game. His side tried to dominate possession and play out from the back. Ever since then, Rodgers' teams have had this preference, and only recently with Leicester has he displayed some flexibility in terms of playing style. However, he has always been open-minded in terms of formation, and has experimented with both the back three and the back four depending on what he feels suits his team. While entertaining to watch, the defensive solidity of his teams has been questioned.

Rightly or wrongly, Rodgers has also developed a reputation for being image-focused. The timing of his departure from Watford was criticised by fans. So too was his mid-season departure from Celtic, while the club was chasing a historic 10-in-a-row, to join Leicester. As a consequence of these sudden and early moves, Rodgers has been unable to consistently build solid connections with fanbases. Nonetheless, he is highly regarded as a coach and man-manager, and he has consistently forged good relationships with his players. 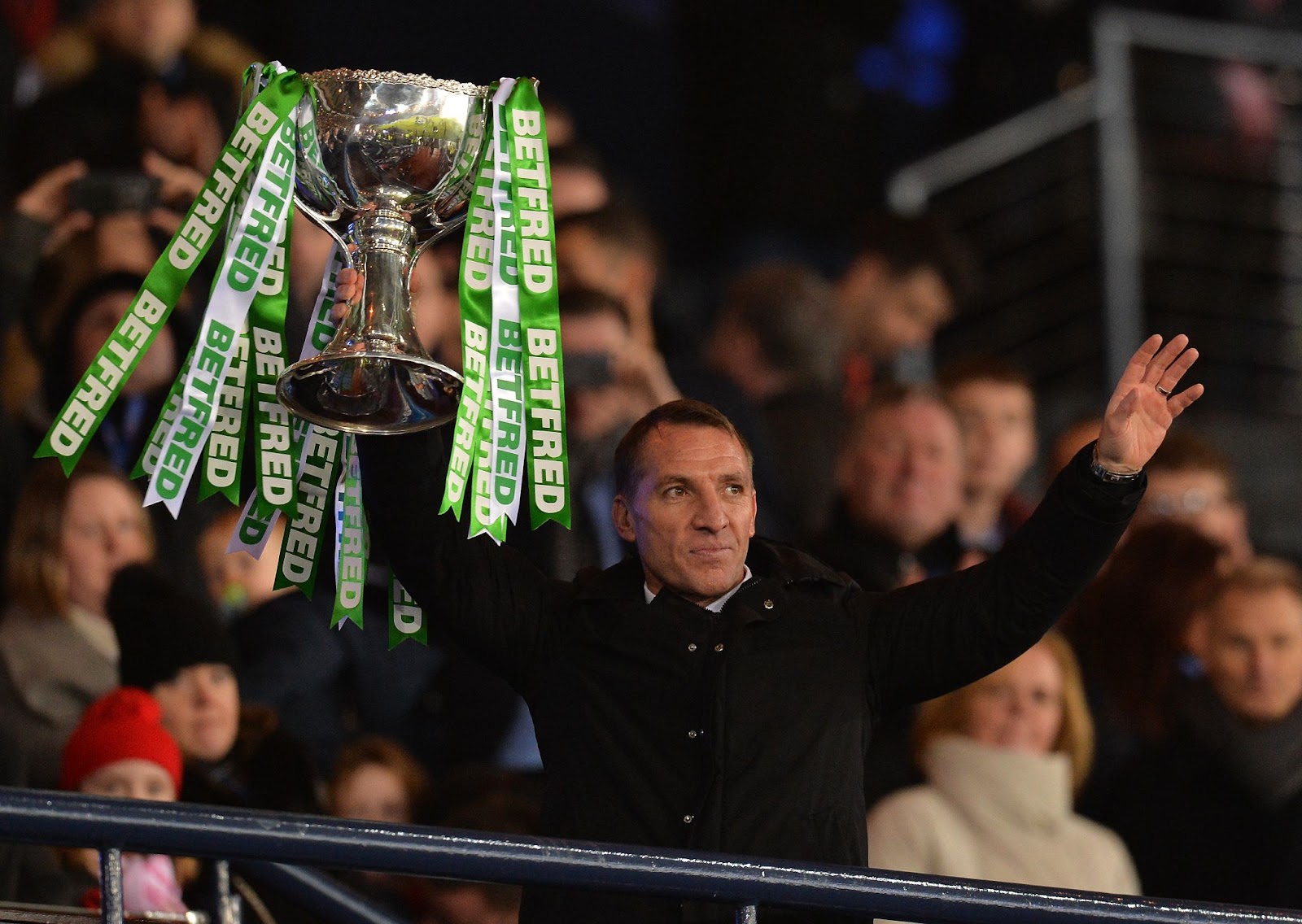 Rodgers won every trophy in Scotland with Celtic

WHO WOULD BE THE BEST FIT FOR MANCHESTER UNITED?

In the short term, Manchester United want to get back into the top four. The next step will be to win silverware, and to once again challenge for the Premier League title. A club with great tradition, United are a club focused towards long-term team-building. Whoever takes over from Solskjaer will need to balance managing a dressing room full of egos with the courage to make big decisions when players are under-performing. The club's fans do not take kindly to defensive or 'boring' tactics, as they are used to watching a team that imposes itself and plays quick attacking football.

With all of this in mind, Pochettino is a more suitable candidate for the Manchester United job than Rodgers.

Pochettino has a track record of taking long-term, holistic approaches to building teams, mixing recruitment with youth development. He also has a clear preference for the back four, and an ability to implement organised pressing. Pochettino has won fewer trophies to date, though he has had less opportunity to pick up silverware due to the clubs he has managed. Furthermore, his European record is decidedly better.