Past it? Moi? Why Aubameyang proving he still has it so crucial to Arsenal future

COMMENT: What a response. Pierre-Emerick Aubameyang. He had to be stung by it. It's one thing to say a footballer won't go that extra yard. It's altogether something else to claim he can't put that extra effort in. That he's simply incapable...

But that's what Aubameyang was accused of - leading up to Thursday night's five-star show against Benfica. Two goals. Including a late winner. It was a captain's performance. A leader's performance. And it put paid to claims during the week that Aubameyang's physical powers were on the wane.

That's what was suggested by Jamie Redknapp, formerly of Tottenham among others, when discussing the Arsenal striker's form this season. There was just no snap to his game. None of the kinetic buzz to his performance. And for Redknapp, this wasn't down to attitude. To desire. It was simply age catching up on the Gabon international. Or to be brutal: physically he wasn't the man he was 12 months ago.

"Aubameyang is past his best," declared Redknapp. "He's going to have moments. But when I watch him sometimes, it's like he's lost his superpower."

Ouch, but if that wasn't bad enough, then came the kicker: "Now I'm seeing a player who looks like he's going to get bullied."

As mentioned, it's one thing to claim attitude as a problem for a player not putting in. It's something else when the claim is this player - no matter how hard he tries - simply can no longer compete.

Going into the Benfica game, Aubameyang's manager was confronted by Redknapp's words. He feigned ignorance, but then launched a passionate defence of his captain. Even if the claims had been missed by Aubameyang's personal news cycle, coverage of Mikel Arteta's response would've put the accusation front of mind for the centre-forward ahead of last night's Europa League return leg. 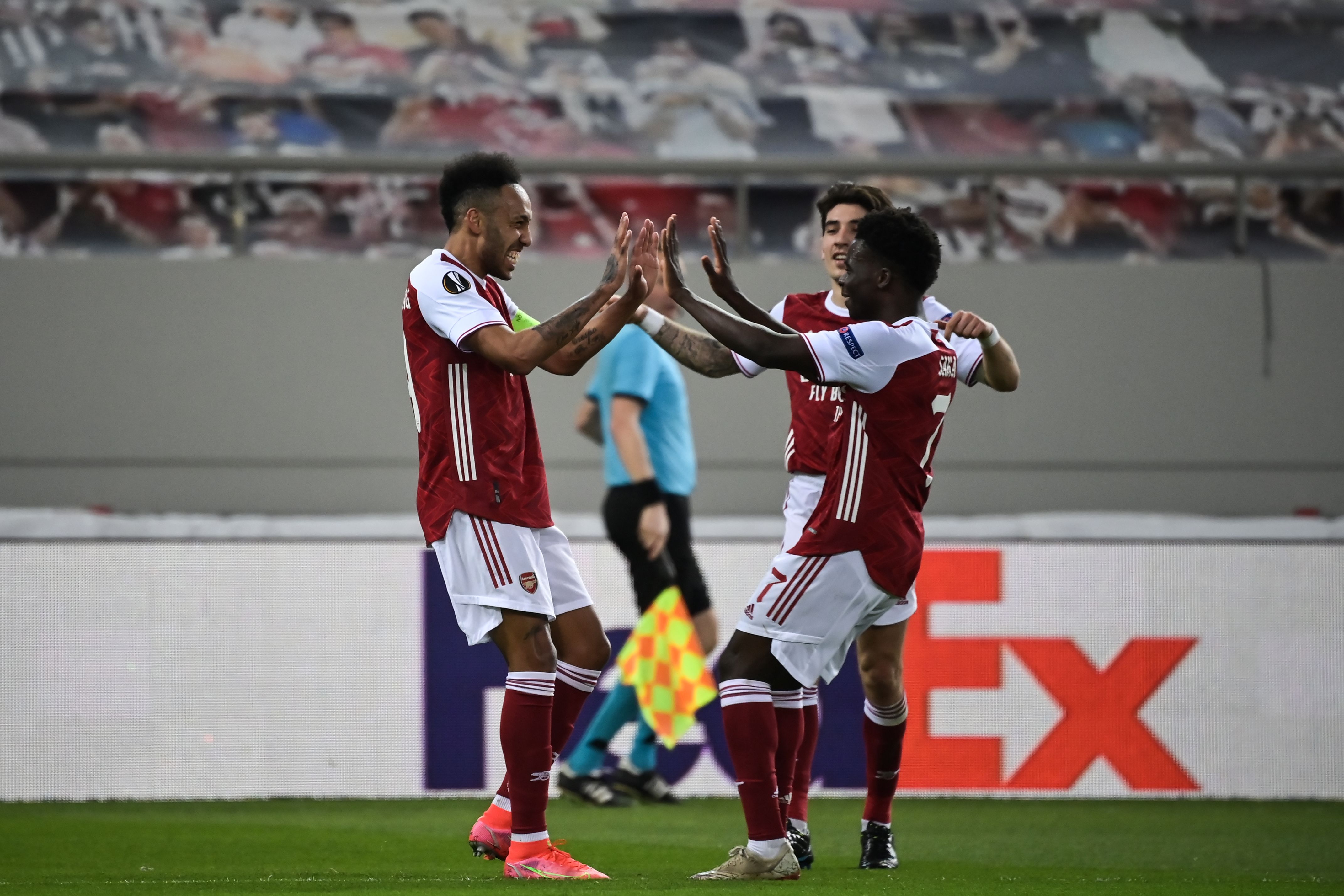 Aubameyang celebrates his opener with Saka and Hector Bellerin

Was it a factor? Did Redknapp deliver a needed jolt for Aubameyang? Only he can disclose that. But the performance. The impact he had over the course of Thursday's game. Whether consciously or subconsciously delivered a message: Aubameyang still has it. When it's tight. When it's in the clinches. He can still be the most decisive player on the pitch.

Arteta said as much in the aftermath. His star man had been hurting. Frustrated. The effort had been there, but for no reward. But this time, that perseverance was repaid.

"The last few days after the game in Rome against them, he missed three opportunities that are normally three goals for him," reasoned the Gunners manager, "and he needed to react and it's great to see that the way he reacted is by being upset and trying to be better and not just feeling sad for himself in this moment."

Indeed, right from the off, the captain was at it. It was Aubameyang who had the first meaningful effort on goal. It was he who opened the scoring on the night. And it was the No14 who made sure his club were into the round of 16 with a late headed winner.

As tight a game as it gets. As decisive a moment as any in a season. And Aubameyang delivered. That header past Helton Leite in Benfica's goal cannot be underestimated. As Arteta stated going into the game, everything hinged on Thursday's result. The season. Their planning. Everything. And with less than four minutes of the tie to go, Aubameyang made sure he planted his header confidently past Leite for the winner. A big moment made for a big player. A big personality. To be fair, this column now understands why Arteta has been so bullish about counting on Aubameyang as Arsenal's club captain.

At the other end of the career scale was the man who made it all happen. Bukayo Saka had already laid on his skipper's first for the night. And with extra-time looming, he found the energy to go again. With a couple of stepovers, Saka swung in a left-foot cross reminiscent of Liam Brady at his best. The in-swinger taking out Leite and Aubameyang's marker to leave the striker free to head home unchallenged. It was right out of the top drawer and only confirmed the hype now building around this Hale End graduate.

"It was (nerves of steel)," said Arteta later, "and as well because he's really fatigued. He's played a lot of minutes and he hasn't had much rest. We asked him to go again and produce this moment, and the boy has done it..."

The future. The present. But not yet the past. On Thursday's performance at the Emirates, Aubameyang will be around for several years to come to help guide the likes of Saka. And as he did last night, to deliver an end product for all their effort. A senior player can provide inspiration, guidance, but also reward. Nothing can blunt a young player's game more than seeing his creative efforts go to waste. Eventually those crosses. Those through balls. They're put back in the locker, never to be seen again, as a young player chooses to play it safe. Having someone of Aubameyang's finishing ability is not just good for results, but also for the development of those young players behind him.

He may've been stung by claims in the lead-up, but Thursday night proved Pierre-Emerick Aubameyang is still capable of making the difference at the most decisive moments.