Ones to watch: The starlets who drove Real Madrid to UEFA Youth League glory

Real Madrid have won the UEFA Youth League for the first time since this continental competition was launched in 2013, defeating Benfica 3-2 in the final of the 2019/20 edition.

With club legend Raúl González in the dugout, Real Madrid shone during the final stages in Nyon, Switzerland, and can now claim to have the best Under-19s side in Europe.

Much of the focus after this victory was on Raúl and on what this means for his burgeoning coaching career, but there are some special young players who deserve to be heralded too, as they will be the future LaLiga rising stars in some years. Here, then, comes a look at five of the key players behind Los Blancos' Youth League success.

One of the players who the Real Madrid and Spanish national team youth coaches have the highest hopes for is Luis López. The goalkeeper was a hero in the Youth League final as he pulled off a spectacular save to parry a Benfica penalty. Although his goalkeeping colleague Toni Fuidias was also given minutes during the final stages of this tournament, it was López who Raúl went with for the biggest moment and this decision paid off.

López is not only a technically excellent goalkeeper, but he's also an intelligent player and leader. He can provide tranquillity to his back line when he has to and he can motivate the troops when there is a need for some leadership. Away from the pitch, he has achieved great grades in school and has a very good chance of making it to the first team. Zinedine Zidane has even called López up to the first-team squad before, although he hasn't yet debuted.

Several great full-backs have emerged from Real Madrid's La Fábrica - The Factory, in English - over the years and Miguel Gutiérrez is the latest one. During this season's Youth League, he proved just how special he can be as he played in every one of Real Madrid's 10 matches, even scoring four goals. Gutiérrez scored at important moments too, netting in the quarter-final, the semi-final and the final.

His goals prove that he is an attack-minded full-back, but he also performs his defensive duties diligently. Furthermore, he is a leader and has captained his side on various occasions as well as assuming penalty-taking responsibilities when needed. Zidane called him up to the first team following the coronavirus pause and he is expected to make a senior debut soon. 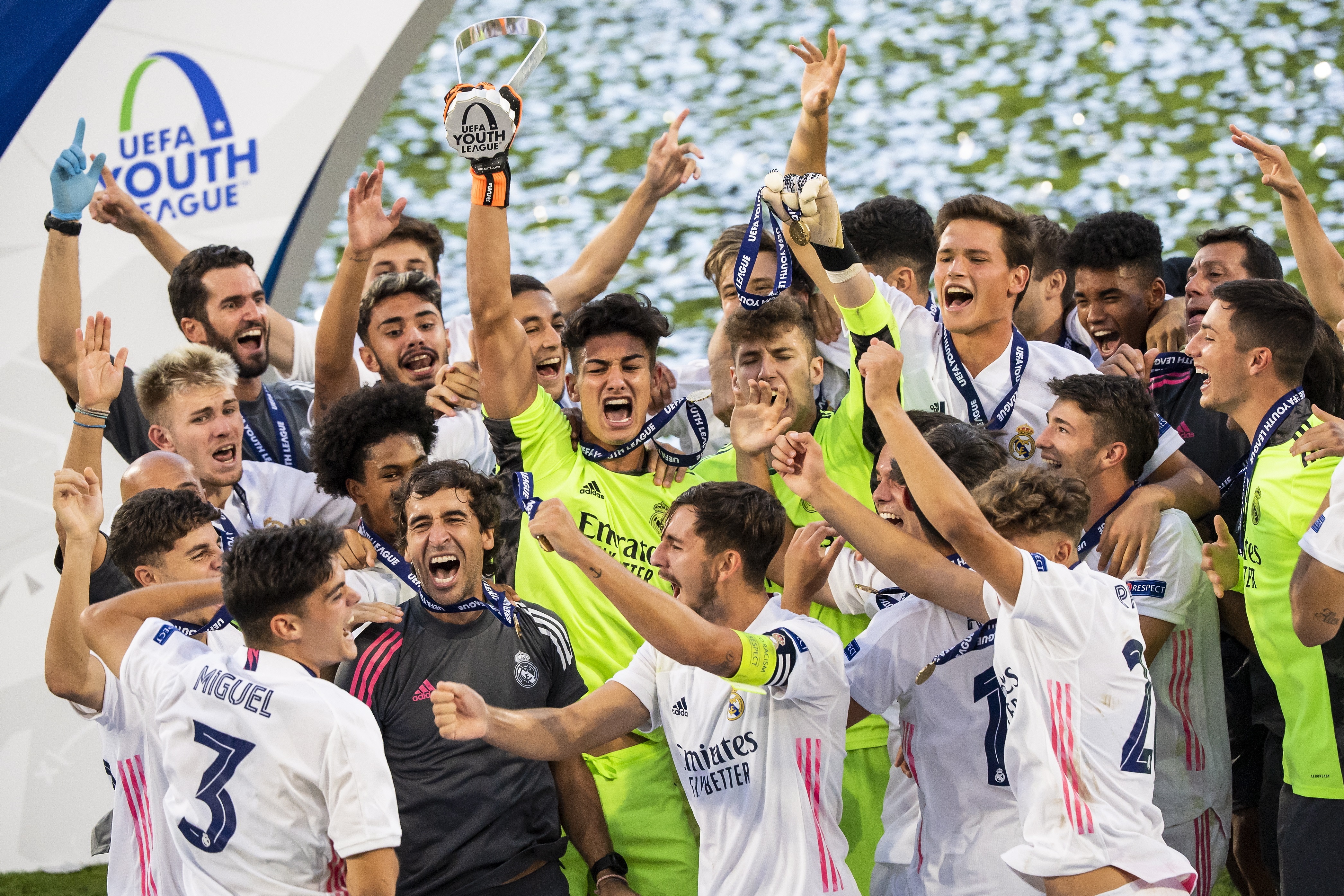 Along with Miguel Gutiérrez, Pablo Ramón is the only other player who featured in every single match during Real Madrid's triumphant Youth League campaign. After arriving from RCD Mallorca's academy in the summer of 2019, after he'd already debuted with the islanders' senior side, Ramón fit in right away in the centre of defence for Real Madrid's Under-19s.

Able to play on the left or on the right of central defence, he stands out for winning one-on-one battles and for the way he can bring the ball out from the back. There is a clear path to the first team for Ramón, who is ready to take a step up next season by becoming a starter for Castilla, Real Madrid's B team, playing in Spanish third division.

During Real Madrid's march towards Youth League glory in Nyon, Antonio Blanco was the key man in the middle for Raúl's side. The team completely revolved around the central midfielder, as it was Blanco who so often won the ball back for his side and who so often launched attacks.

His touch is as soft as his tackles are strong and Blanco has stated that he loves nothing more than putting his teammates into good positions, which is clear to see when watching him. He is one of the few players in the winning Youth League squad who has already spent a full season at Castilla level and big things are expected of him.

Sergio Arribas is one of the very top talents in La Fábrica and has enjoyed a particularly productive 2019/20 at Under-19s level. He is the kind of playmaker who coaches love as he can create chances and also score himself. That's what he did in this season's Youth League, where his standout performance came in the quarter-finals against Inter as he assisted two goals and won the penalty for the other in the 3-0 win.

Opponents couldn't stop this quick left-footed playmaker during the Youth League and that has been the story of Arribas' entire youth career. He is set to make the jump up to Castilla for 2020/21 and Raúl will love having this talent at his disposal.