COMMENT: He's furious. Cristiano Ronaldo feels insulted. Slighted. Benched for the first time, the club's No7 views the actions of his manager as a personal attack. A decision that is a clear line in the sand between the two of them...

At least that's what the headlines screamed four years ago. And would continue to bellow for months going into the New Year of 2018. Ronaldo had found himself - for the first time - starting for Real Madrid from the bench. Being withdrawn early in the second-half of games. It was something unheard of. And made all the more baffling as Zinedine Zidane's team spluttered and stuttered during that first-half of the 2017/18 campaign.

Six months later and Real Madrid were crowned champions of Europe. Ronaldo, with a staggering 44 goals, was an ever present for the second-half of that season. And it soon emerged in the aftermath of Champions League success against Liverpool that the supposed pre-Christmas rift between coach and player had been the stuff of press speculation. Instead, the real story broke of Zidane approaching Ronaldo with a plan to tailor his campaign in order to have him peak in the final month of the season. For the first time, Ronaldo would be withdrawn from LaLiga games. Rested for Copa ties. Of course, the speculation ran wild. But Zidane had a plan. One which Ronaldo believed in. And their reward was Champions League glory in Kyiv.

It was the stuff of genius from Zidane. For many observers, the best piece of management the Frenchman has ever pulled off. And it happened thanks to a co-operative Ronaldo.

Cycle forward to today and Ole Gunnar Solskjaer now sits in Zidane's position. And like the Frenchman, as his team stumbles in these opening weeks, Manchester United's manager is being hammered for his handling of Ronaldo. Rested for the Carabao Cup tie at home to West Ham United, Solskjaer's team were dumped out of the competition a fortnight ago. Benched for Saturday against Everton, United dropped another two points at Old Trafford in a game - on paper - they should've won.

Just as four years ago in Madrid, Ronaldo's manager is getting it in the neck today. Where it was Marca and AS driving the supposed rift, it's now the Daily Mail and The Sun. Suddenly everyone's body language expert. A lip reader. It's clear the club's No7 is furious with his manager... 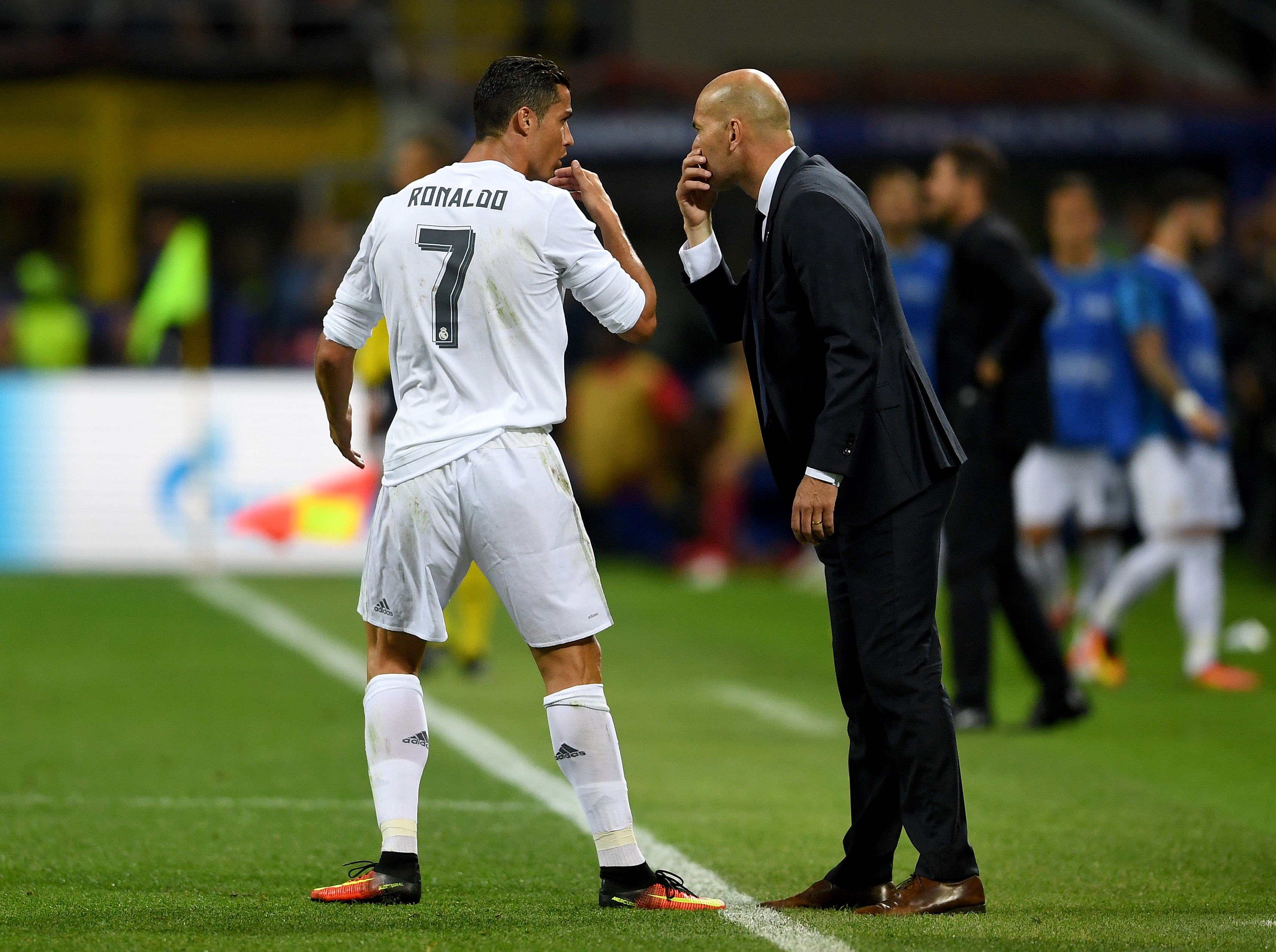 Ronaldo and Zizou together at Real Madrid

But forget that lot. Beyond the pundits and scribes, you can understand the frustration of United's support. There's a good argument to be made that simply for the momentum factor, Ronaldo should've started on Saturday. It was his goal that won the midweek Champions League fixture against Villarreal. After three defeats in four games, it was Ronaldo's injury-time intervention that dragged United's early season campaign back on the rails. The team was up. Their star man was up. As was the home support. Surely Solskjaer wouldn't flirt with form and suddenly halt all that momentum garnered from a magic night at Old Trafford?

But he did. And on the eve of an international week, too. If Ronaldo was needing a rest, why sacrifice his commitment with United to keep him fresh for Portugal? It made little sense. And for this column, it still doesn't. We argued last week, post-Young Boys, that Solskjaer's penchant to tinker with the line-up was holding his team back. On the face of it, Everton was simply another sorry, frustrating example.

But there is previous in all this. Zidane and Kyiv is proof enough. And Solskjaer's post-match comments offer more than a hint that Ronaldo will be managed through games this season.

"Me and him we understand more than the experts for example," said the Norwegian in the aftermath. "It's about picking the right moments to play him, to not play him. He's not a young puppy anymore but he's as professional as ever and ready to come on and he came on today with energy and attitude."

Again, this column would offer the counter that Ronaldo isn't your average 36 year-old. He's not even your average 26 year-old. The pace may no longer be there, but the durability surely is. If there's any player in the country better at post- and pre-match preparation, we'd like to see him. And - as we've mentioned - it was a game just before the international break up. Furthermore, Solskjaer's call on Ronaldo doesn't explain the similar benching of Paul Pogba. Again, a player in form - rare form. Why hold back a player with a Prem record of assists while a fortnight awaits involving France? Indeed, with his tail-up after a first goal for the club in midweek, why immediately swap Alex Telles for Luke Shaw at left-back just when things were falling for the Brazilian? As we've argued in the past, momentum is a key factor in football. Difficult to obtain, but so easily lost - particularly when a manager is constantly recycling his XI.

But in Ronaldo's case, this column must concede that Solskjaer can point to Zidane and his success in managing the striker. There is previous. There is something to support the Norwegian's handling of Ronaldo in these opening weeks.

Indeed, it's certainly offers more than the headlines we're seeing today - just as those that were being concocted four years ago in Madrid.