Liverpool boss Klopp hits back at Clattenburg: Says more about him then me

Man Utd midfielder Pogba hits out at critics: I won't ever change

Not Haaland nor Werner but... Why Cavani can prove decisive Man Utd signing for doubting Ole

COMMENT: Edinson Cavani. He's not the centre-forward Ole Gunnar Solskjaer wanted. But he's certainly the centre-forward Manchester United's manager needed. And early signs suggest the Uruguayan can be as transformative for this United team as any addition made in the Solskjaer era...

At 33, the doubts are understandable. And the fact that it took the intervention of a trusted intermediary to put Cavani and Solskjaer together only adds weight to the scepticism. But the Uruguayan is the player Solskjaer had longed to find this season. It's been a search that's led him to Salzburg. To Leipzig. To rejection, frustration and even some public deception. But he has his man now. And match after match. Performance after performance. Cavani is growing into the on-field presence Solskjaer has been seeking.

The United manager has always wanted a centre-forward. A genuine centre-forward. His ideal attacking structure built around a physical presence up top. An outlet for his midfielders to hit. For his wingers to work off. And a threat to rattle any opposition back four.

It's why he flew to Salzburg last Christmas to secure the commitment of Erling Haaland. Only Solskjaer and the now Borussia Dortmund star can tell us the details of their conversation. But it's no understatement to say he was blindsided by Dortmund's agreement with RB Salzburg when the Germans announced it.

Hurt, chastened and with the January market shut, Solskjaer went the extra yard again. This time for Timo Werner. The United manager flew to Leipzig to see the Germany international and discuss an Old Trafford move face-to-face. But while this time there was no commitment from Werner, the decision to go with Frank Lampard and Chelsea still left Solskjaer frustrated.

Between his jaunts to Austria and Germany, Solskjaer did approve a deadline loan arrangement with Shanghai Shenhua for Odion Ighalo. But the Nigerian was always going to be a stop-gap. However, the frantic rush to bring the former Watford man back to England was proof enough of how critical Solskjaer sees the role of centre-forward in his system. That Ighalo's deal was extended to January is credit to the player. But while Ighalo's fans have been frustrated by the limited opportunities he's seen this term, the player and his camp knew Solskjaer's search would continue even after winning that extension.

But the irony with Cavani is that there was no search involved. No jetsetting needed. It simply took someone close to Cavani putting in a call to Jorge Mendes, the Portuguese agent, and requesting a bit of assistance. Mendes, of course, was happy to oblige and was soon making contact with United. The conversation was short. You don't need to sell a player of Cavani's status. But Solskjaer sat on it for a couple of days. A lack of English was a concern. The age also an issue. But after some deliberation he convinced himself it was a deal worth pushing through.

Fast forward to today and Solskjaer is delighted. As is everyone involved in the transfer. Known as being ruthless on the pitch. Even selfish. Cavani has been anything but that since driving through the gates at Carrington. He's already established himself as a senior leader inside the locker room. He's been happy to seek out and give advice to his younger teammates. And as his English improves, those who work day-to-day at United's training HQ can see the Uruguayan becoming as influential as Bruno Fernandes. The personalities are different, but the drive and the motivation the same. Significantly, from what staff have seen from the club's No7 so far, Cavani is a man who leads by example. 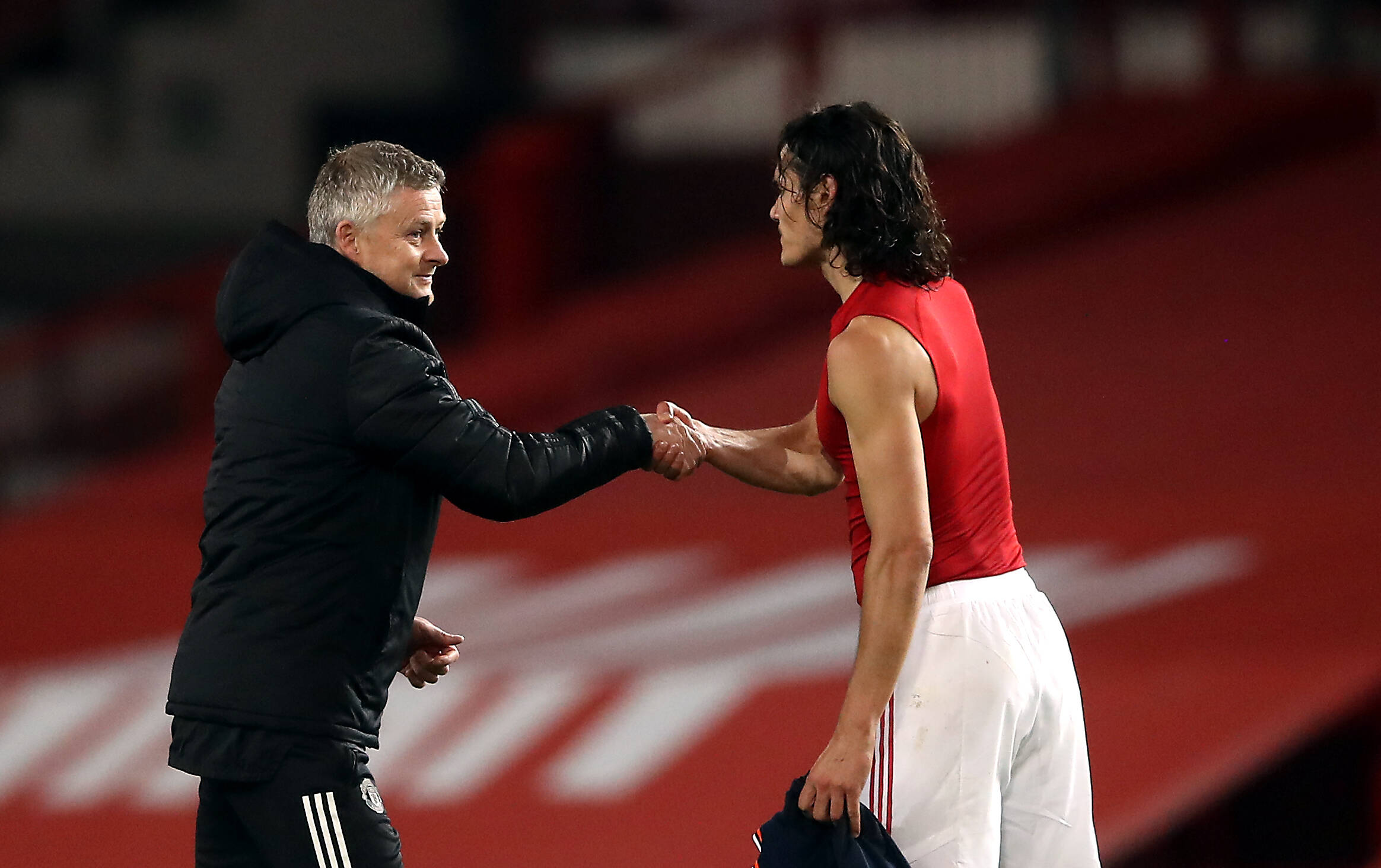 Solskjaer congratulates Cavani on his performance in victory over Istanbul Basaksehir

Some are already likening the Uruguayan's approach to that of Zlatan Ibrahimovic and his 18 months at Old Trafford. As good as the Swede was for then manager Jose Mourinho on the pitch, it was his leadership amongst the players and his guidance for the club's youngsters which was most significant. For Ed Woodward and Matt Judge, effectively the two directors who call the transfer shots at United, watching Ibrahimovic making such an impact with AC Milan should give them - and the board - pause for thought. Where would the club be if they'd shown faith in Ibrahimovic's powers of recovery from that knee injury? Indeed, where would Paul Pogba be with Ibrahimovic demanding better from the Frenchman these past two years?

But that's a 'what if' for another day. At 39, Ibrahimovic is as good as any centre-forward now playing in Europe. Which is why Cavani, six years Ibrahimovic's junior, could well become a two, three, even four year prospect for United.

Indeed, for Istanbul Basaksehir coach Okan Buruk, the energy and drive of Cavani is already making a difference. Okan conceded his players were taken aback by Cavani's running off the ball and pressing of his opponents.

"Today we need to talk about the Cavani factor," declared Okan after last week's 4-1 Champions League defeat at Old Trafford. "With him, they put more pressure on us in attack."

Delio Rossi, who worked with Cavani at Palermo, is adamant United will benefit from Cavani's workrate: “Physically he is the strongest player I coached. After playing a game he could play another one."

Watching Cavani do his thing, how can that not rub off on Anthony Martial and Marcus Rashford? This is the hope of Solskjaer's backroom team. Both players have come in for criticism over their work-rate when the opposition are in possession. Old habits have been hard to shake - even after conversations with coaching staff. If it's simply by example, neither forward is going to want to be shown up by a teammate ten years their senior.

And on those Cavani's leadership skills, Rossi was equally as effusive: "He is generous, intelligent and instinctive. As a strike-partner, he can adapt to anyone."

Sometimes it just falls for you. Cavani isn't Haaland. Nor Werner. But in this United team, he could yet prove just as effective as either striker - with the added bonus of being a positive, leading influence on his younger teammates.

Solskjaer has spoken about culture inside the club. He's talked about mentality. Highlighting the demands of Fernandes, he said just Friday: "We can all learn from his mentality and mindset. If it's 4-0, he wants 5-0. He always wants the team to improve."

This is what Cavani also brings. And as he grows stronger. As he settles into the team's playing patterns. Everything he showed as a PSG player will be mirrored in a United shirt.

He didn't cost United a penny. He didn't even cost his manager an airfare. But Edi Cavani can be as transformative as any signing made during this Solskjaer era.