Nketiah, Emile & Willock: Why Arteta must now deliver on his challenge to Arsenal kids

COMMENT: He did it. He put it out there. Mikel Arteta threw down the challenge to his kids - and they met it. Now it's on the Arsenal manager. Does he stick with youth for Sunday's Prem return against Burnley...?

The answer should be: yes. Eddie Nketiah. Emile Smith Rowe. Joe Willock. They all answered Arteta's call going into last night's Europa League tie at Dundalk. Folarin Balogun was celebrated. And he deserved it. An assist and a goal from off the bench another glimpse of this young striker's promise.

But for those whom started, they really do deserve to have their manager's pre-match words turned into action when he announces the team sheet on Sunday.

He wasn't short. Nor snappy. But you could see the question irked him on Wednesday morning. The suggestion being the only chance of first team minutes for this glut of academy talent being the Europa League and Cups. The Premier League, it was insinuated, was strictly for the established and experienced.

And then came the promise. The incentive. An assurance from the manager that he won't stand on reputation if a young player warrants a Premier League call.

"We have some really good examples of things that have happened in the last few months," insisted Arteta, "and not only players that are starting football matches in different competitions, but as well, players that have taken the spot of somebody senior in that team or that squad."

But now Arteta faces a test. Will he be good to his word? Because on Thursday's performance, there's several of his young line-up that displayed more, much more, than any of his senior players have in recent weeks. 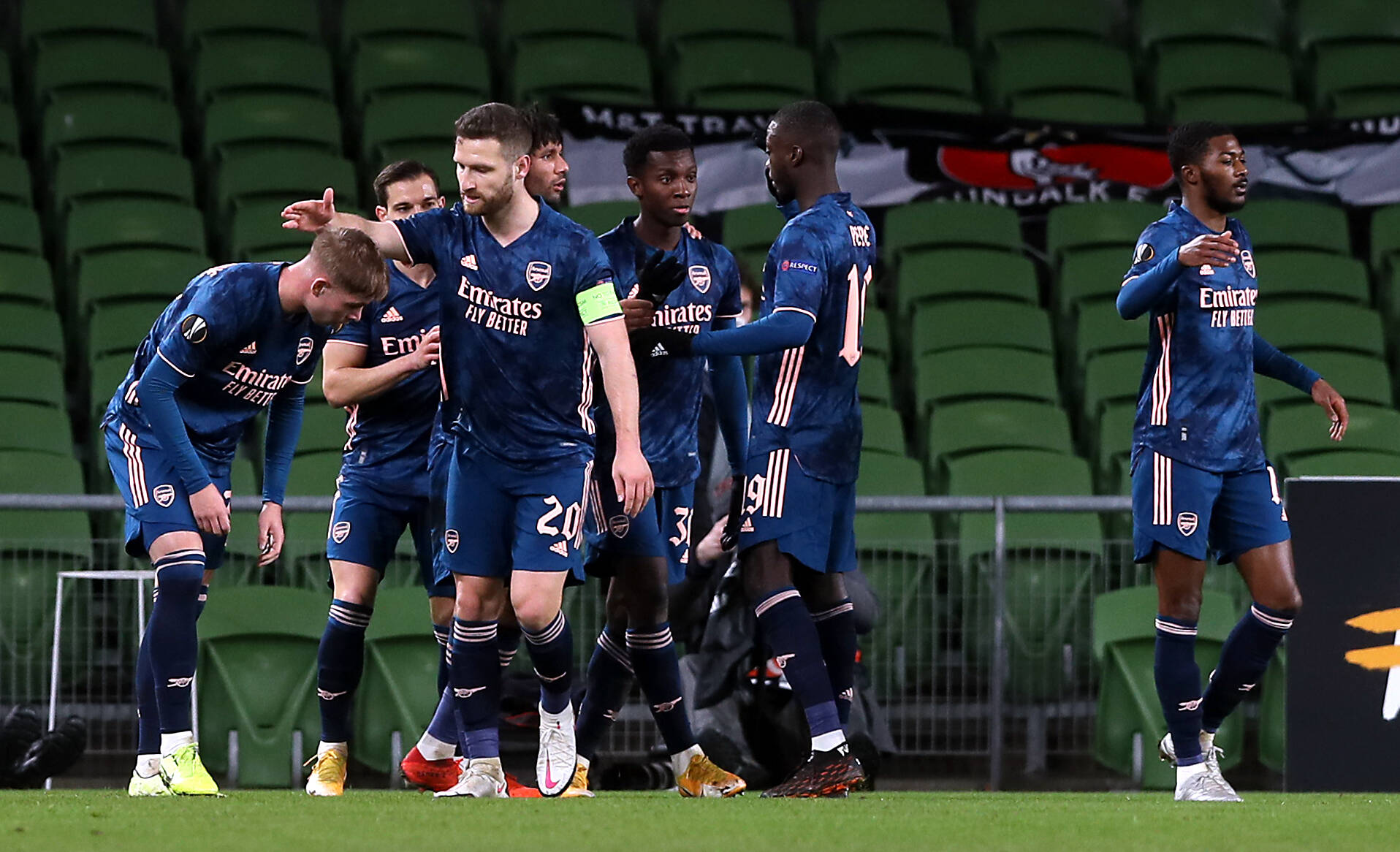 None epitomised that greater than Nketiah. Leading the line as Arsenal's lone centre-forward, he set the tone for the evening with the visitors' opening goal. No assist was needed. No help required. Nketiah did it all himself - and it was everything Pierre-Emerick Aubameyang, the club's captain, has been failing to do since that opening day win at Fulham.

He ran down a lost cause. He gambled on a 20:80 chance of Dundalk's defence coughing up possession. He pressed. He won the ball. And he clipped it past the home team's goalkeeper. Energy. Sacrifice. And a little bit of courage. Everything we saw from Aubameyang last season - but not from the Auba of this term.

"No one is undroppable," Arteta declared, referring to his captain, going into the tie. "At the end of the day, we have to find the right players to win football matches."

Well, for Burnley at least, he may well have found one in the form of Nketiah. But will he play him?

To be fair, Arteta recognised the performance of Nketiah in the aftermath and was eager to emphasise the shift his centre-forward had turned in - particularly off the ball. A nod? A warning to Aubameyang? Perhaps. But for Nketiah, the positive to draw is that his manager caught and acknowledged the effort he had put in.

"You saw the performance of Eddie straight away in the first half, how committed he was, he was going for every ball and Flo when he came on, the same," said the Gunners boss.

Now Nketiah and his support team will hope those words will be turned into reward and a start against the Clarets.

Arsenal's attack needs a spark. Languishing in 15th place on the table. One point from the past three games. The team's paltry ten goals in the Premier League are only better than the bottom three on the table - including Burnley.

Nketiah may still be raw, but he'll give Arteta everything for the time he's on the pitch. And the same can be said of Willock, also a goalscorer on the night, and Smith Rowe. These are first teamers in the making. Youngsters with the potential - if managed well - of being ten-year Arsenal players. And for Arteta, the questioned must be raised: If not now, when? If not against a struggling Burnley at the Emirates, then when will he give these lads an opportunity to hammer down a stake?

Again, regarding Smith Rowe, Arteta was effusive in his praise. Just as the manager highlighted the workrate of Nketiah - in complete contrast to what has been occurring from his Premier League line-up - Arteta talked up the exciting, creative edge to Smith Rowe's game. Again, qualities that Arteta has spoken openly of his Prem team missing these past few months.

"You can see that every time he is around the ball, something is going to happen," enthused the Basque. "He has a lot of creativity, he's a player who has the quality to receive the ball and do things in areas where there are high-value spaces after it gets opened."

In other words, he's everything Arsenal have been missing as they've struggled to find the back of the net this season. Yes, the Europa League isn't the Prem. And yes, Dundalk isn't Prem opposition. But these lads can only beat wants put in front of them. They've passed the test. They answered the challenge thrown down by their manager not 24 hours previous. What more can they do?

It's really now on Arteta. Does he stick with what he has for Burnley? Or does he take the energy - the confidence - that's coursing through these young players and hope it re-invigorates his Premier League team?

For this column, the answer should be: yes. All Arteta has to do is be good to his word.