The last time Everton beat Liverpool, they did so with goals from Tim Cahill and Mikel Arteta. That one of the scorers is now a pundit seen on Match of the Day and the other is managing Arsenal only underlines the red half of Merseyside's derby dominance in recent years. But that could be set to change.

Everton have started this campaign on fire, scoring for fun and winning all of their opening four matches. Liverpool, on the other hand, have been conceding regularly and recently lost 7-2 to Aston Villa. When the two teams meet at Goodison Park on Saturday it will be exactly 10 years since Everton's last derby victory – will they end that long winless streak?

Incredibly, James Rodriguez's transfer to Everton in September almost went under the radar. Nobody quite understood just how good the 29-year-old still was, despite having seen his qualities on full display at Real Madrid, Bayern Munich and internationally with Colombia. Since arriving in England and reuniting with Carlo Ancelotti he has re-asserted himself as a top class playmaker.

In four Premier League appearances, James has scored three goals and set up another two. He's added a genuine long-range shooting threat to Everton's attacking arsenal, not to mention exceptional set piece delivery and passing of a high standard for range, accuracy and imagination. Unlike many other 'superstar' signings, however, he's also raised the performance levels of those around him.

James has had a sort of multiplier effect on his colleagues. Dominic Calvert-Lewin has made the leap from one-in-three goal-getter to one-in-one in part thanks to his new teammate, whose defence-splitting passes and set plays have maximised Calvert-Lewin's clever runs and aerial prowess.

Richarlison hasn't been scoring at the same rate, but his partnership with Lucas Digne on the left-hand side has become increasingly dangerous. James, who starts on the right flank, naturally draws defensive attention towards him, giving more opportunity for Richarlison to make inward runs between distracted defenders. This can draw the opposition right-back in, which means Digne can overlap into space on the outside. James plays excellent switches, and he has two options to utilise here. 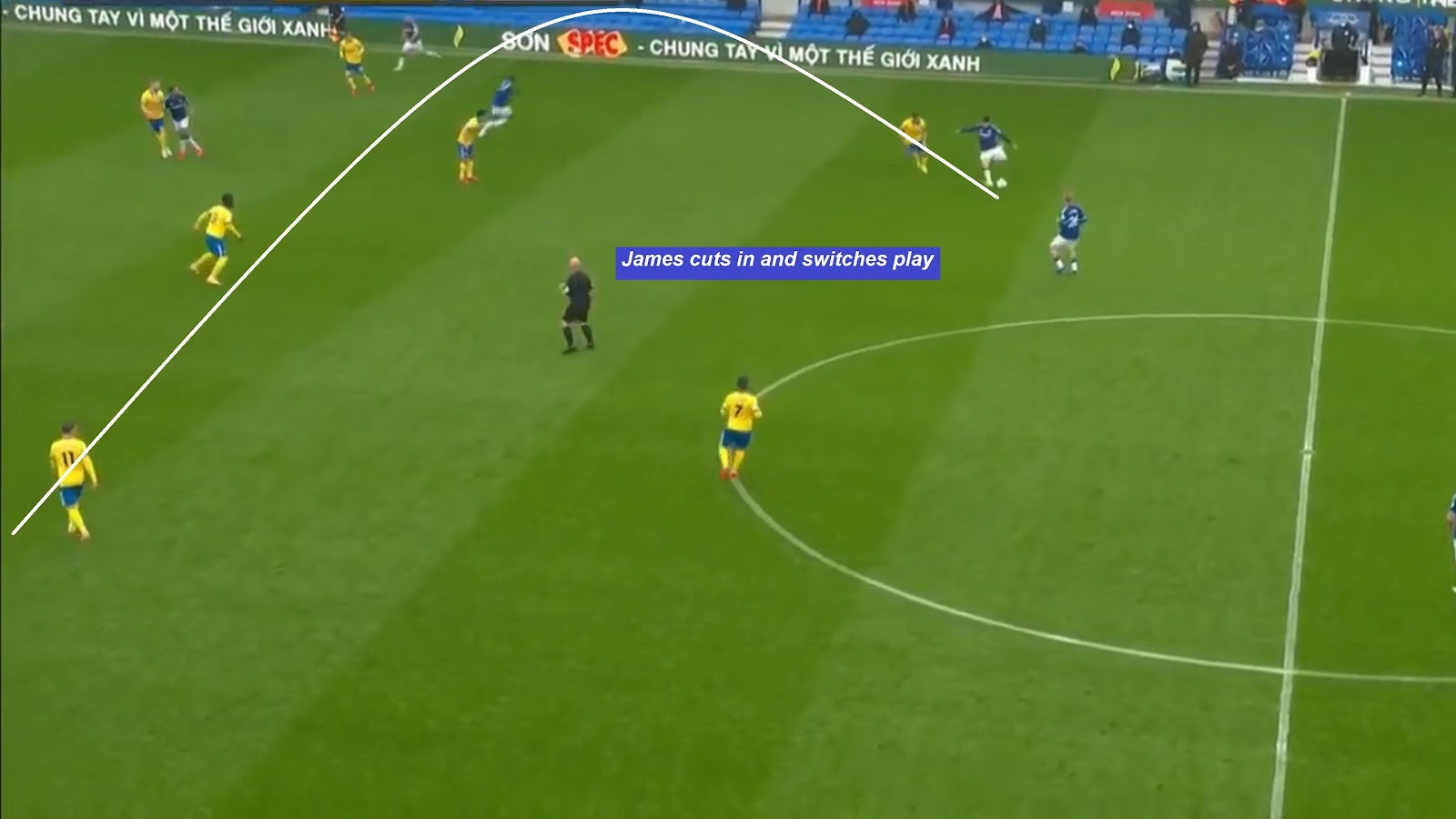 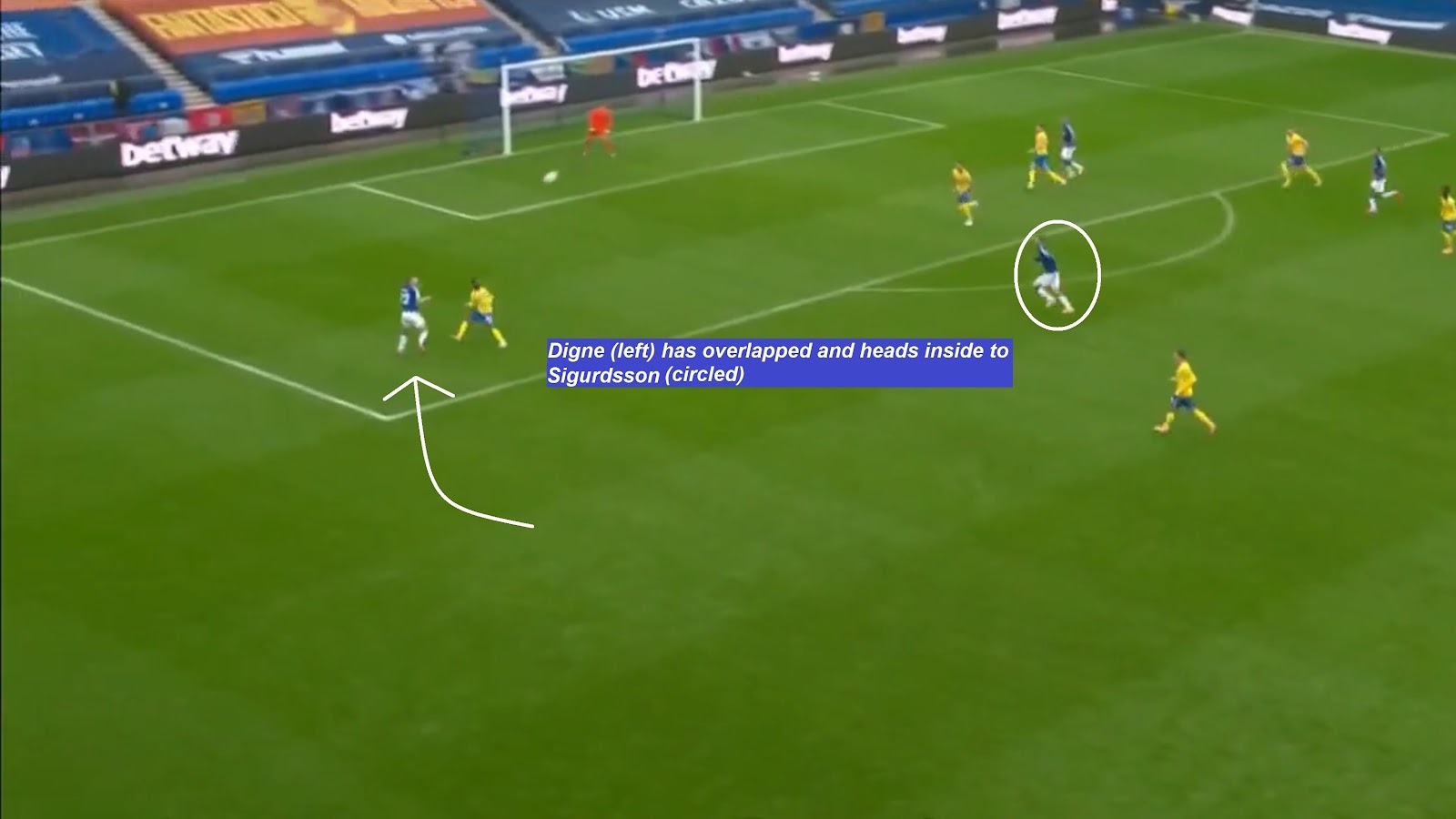 Liverpool haven't been defending well of late, and Everton now have three or four players capable of hurting them. But James is unquestionably the main danger man. Thanks to his presence, the attacking qualities of Calvert-Lewin, Richarlison and Digne have been multiplied. If Liverpool are to win, they need to minimise his influence.

One way Liverpool could reduce James Rodriquez's impact this weekend would be to stop the ball reaching him in the first place. While he starts off on the right wing, he essentially plays a free role with license to move where he sees fit. He's impossible to mark and, due to his touch, difficult to dispossess, so it will take a team effort to stop him from creating chances.

Two of Liverpool's big issues this season are a lack of pressure on the ball and a failing offside trap. According to Understat data, their PPDA (passes allowed per defensive action) has gone up this season, backing up the idea that they aren't applying pressure as intensively now as they did last term. This, combined with a poorly organised but aggressive back line, has led to the opposition getting time and space on the ball. 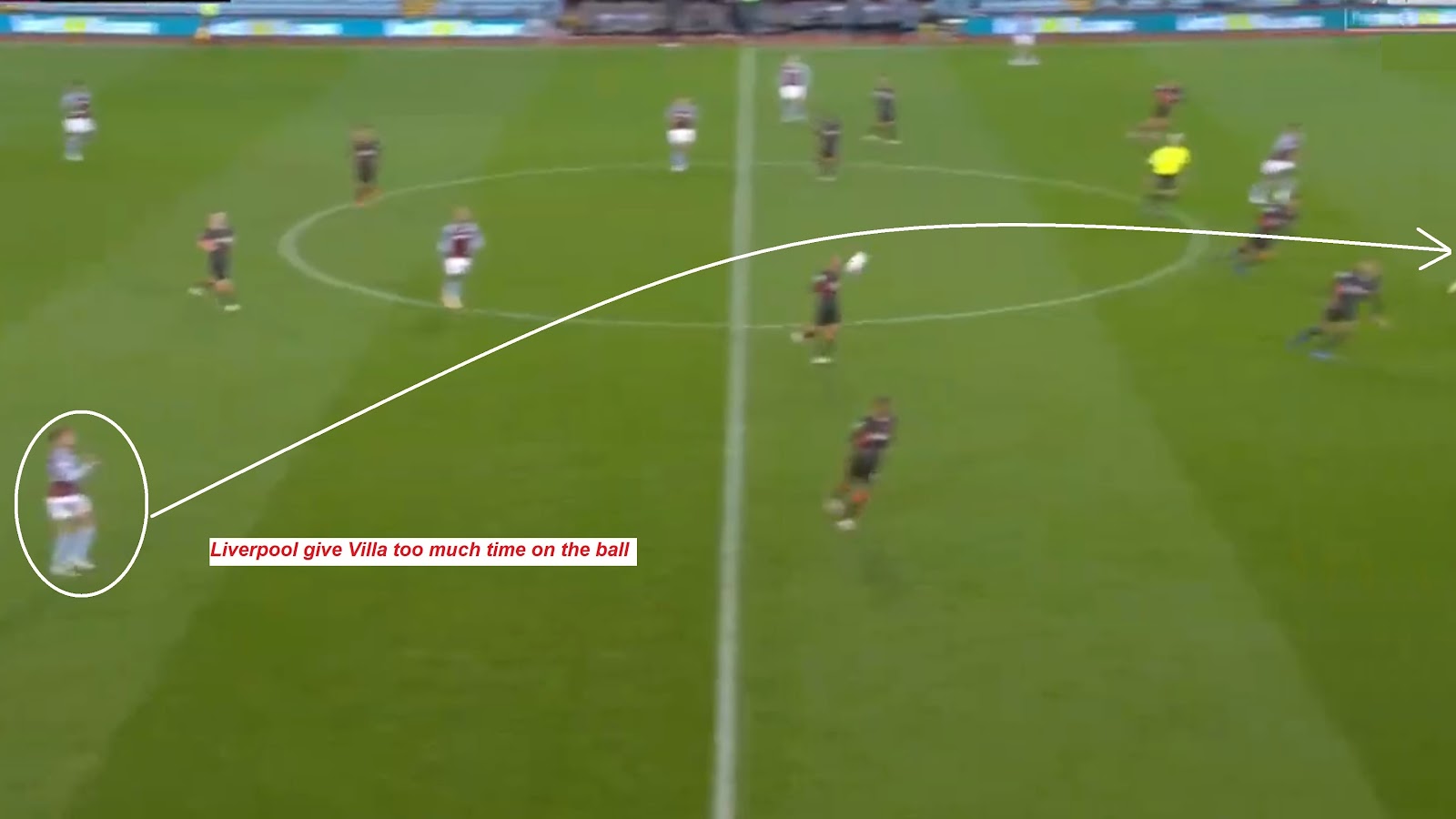 In James, Everton have a player who can exploit this time and space. However, they aren't immune to pressure and, if Liverpool can get back to the sort of pressing game they became famous for, they could create some good counter-attacking opportunities.

During Everton's wins over Crystal Palace and Brighton, they at times struggled trying to play through midfield – mainly when a midfielder received with an opponent pressing him from behind. This was particularly noticeable on the right side, where Everton were forced into back-passes that left Seamus Coleman isolated.

Liverpool's pressing on passes into midfield was an important factor in their success last season, and if they can re-find their intensity they can not only prevent James from getting on the ball and limit Everton's attacking potential, but create scoring chances for themselves.

Another issue present in Liverpool's defeat to Aston Villa was loose build-up play. Adrian and Joe Gomez were responsible for avoidable giveaways when trying to play out from the back, both of which led to goals conceded. This is something they need to avoid this Saturday considering not only the quality of attacker they are up against, but the efficiency of their opposition in attacking transition.

Everton like to sit off and let centre-backs have the ball. But they are organised, and press well once the ball is moved into midfield. Not only do their two No.8s move up to get pressure on the ball, but Calvert-Lewin is a strong defensive forward. Firstly, his defensive positioning when it comes to blocking back-passes is excellent, reducing the opponent's passing options. Secondly, he is always on hand to press backwards, helping to rush the opponent from multiple angles. 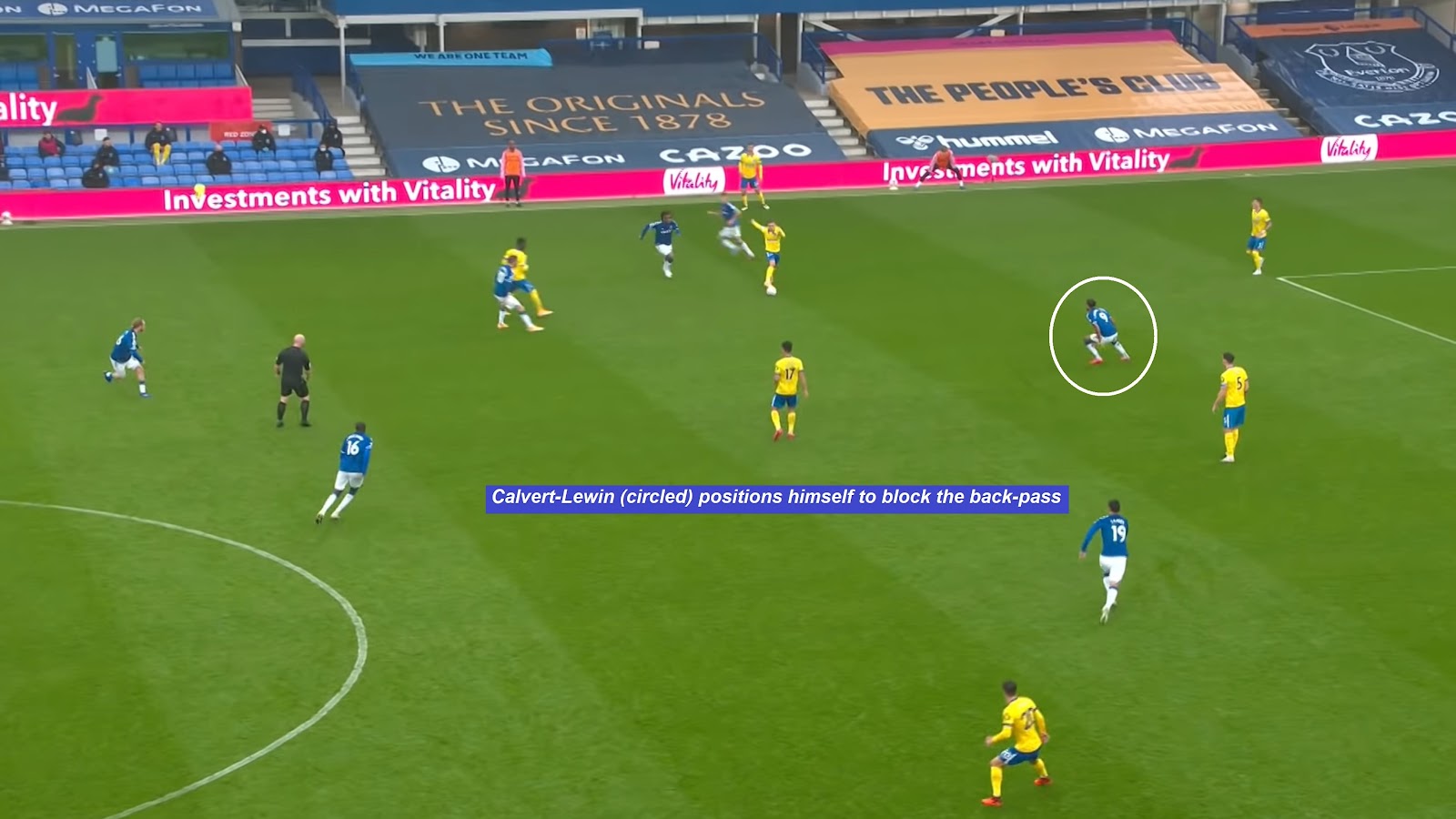 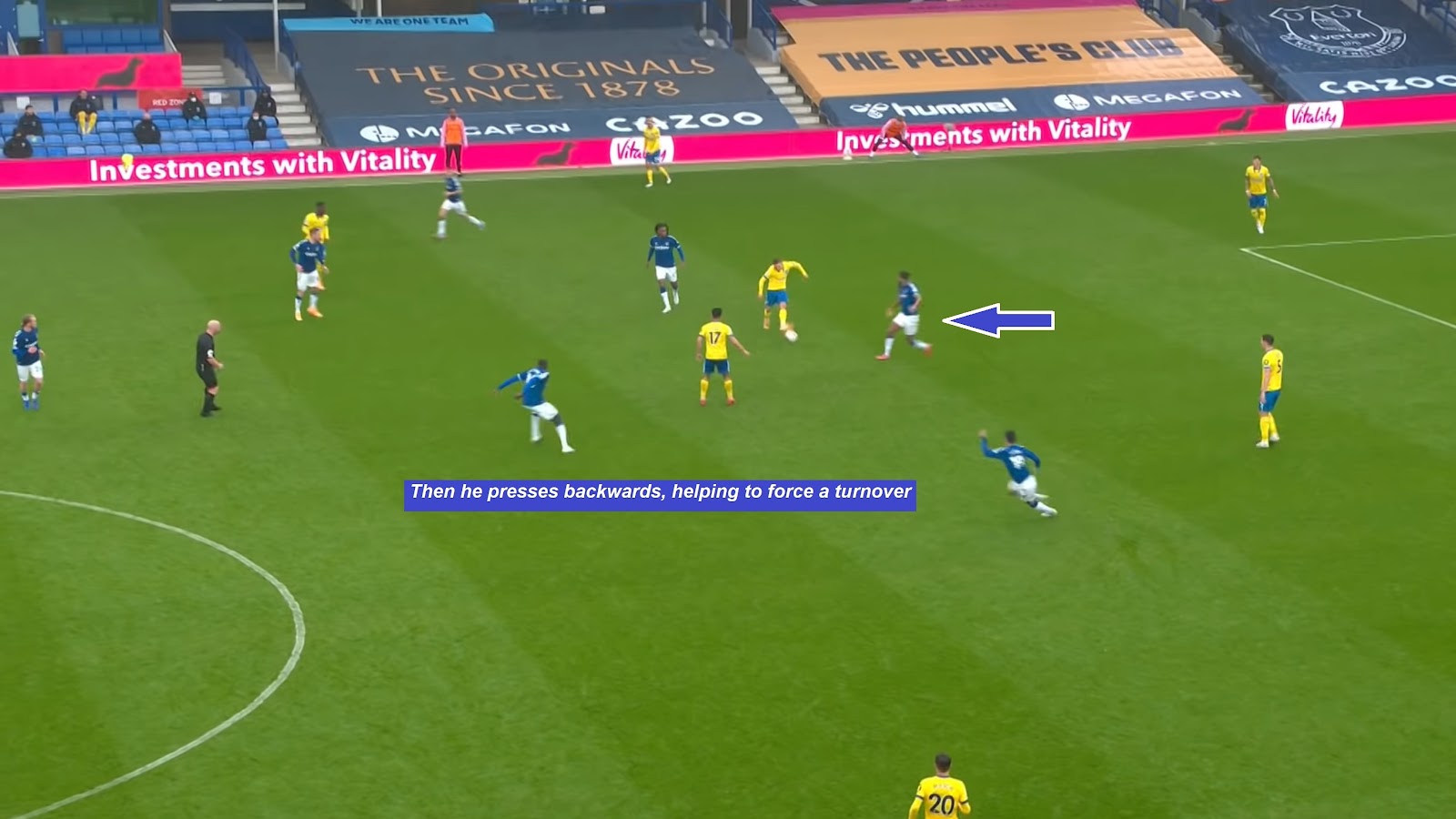 If Liverpool's build-up isn't sharp or their midfielders are slow to release the ball, they will be relieved of possession. At that point Everton will counter-attack using the speed of Richarlison, the penalty box movement of Calvert-Lewin, and the all-round threat of James.

Fortunately for Klopp, he has built a multifaceted attacking outfit, one that is willing and able to play more directly if necessary. Virgil van Dijk is an outstanding long-range passer, Mohamed Salah and Sadio Mane are uniquely skilled when it comes to bringing down aerial balls with one-touch control, and Liverpool's midfielders are quick to hunt second balls.

This may be their safest route to goal on Saturday, and it may also be their most effective. Everton didn't look compact after long balls against Brighton, and that space between the lines could be exploited by Liverpool's midfield runners.