On Sunday evening, Manchester United take on Sevilla for a place in the Europa League final. Both teams have already qualified for the Champions League, so don't need to win this competition to gain access to Europe's elite club tournament. However, both have a recent history of success in the Europa League and will be looking to carry that on.

Here, we at Tribal Football preview the game, looking at how Ole Gunnar Solskjaer's side can break down their Spanish counterparts.

TRAORE AND TRANSITIONS: WHERE SEVILLA ARE OPEN

Sevilla have already defeated Premier League opposition to reach this stage, beating Wolves 1-0 in the quarter-final. However, early on in that game the English side demonstrated one way Sevilla can be opened up.

After a turnover in midfield just after the 10-minute mark, Adama Traore raced through Sevilla's defence before being brought down in the box. In this particular move, Julen Lopetegui's side only had three players behind the ball and weren't able to press effectively enough to stop the counter-attack early. With both of their full-backs pushed high, Traore – with support from Raul Jimenez – could dribble into space against Sevilla's centre-backs and their defensive midfielder, former Manchester City man Fernando. The end result was a penalty kick to Wolves. 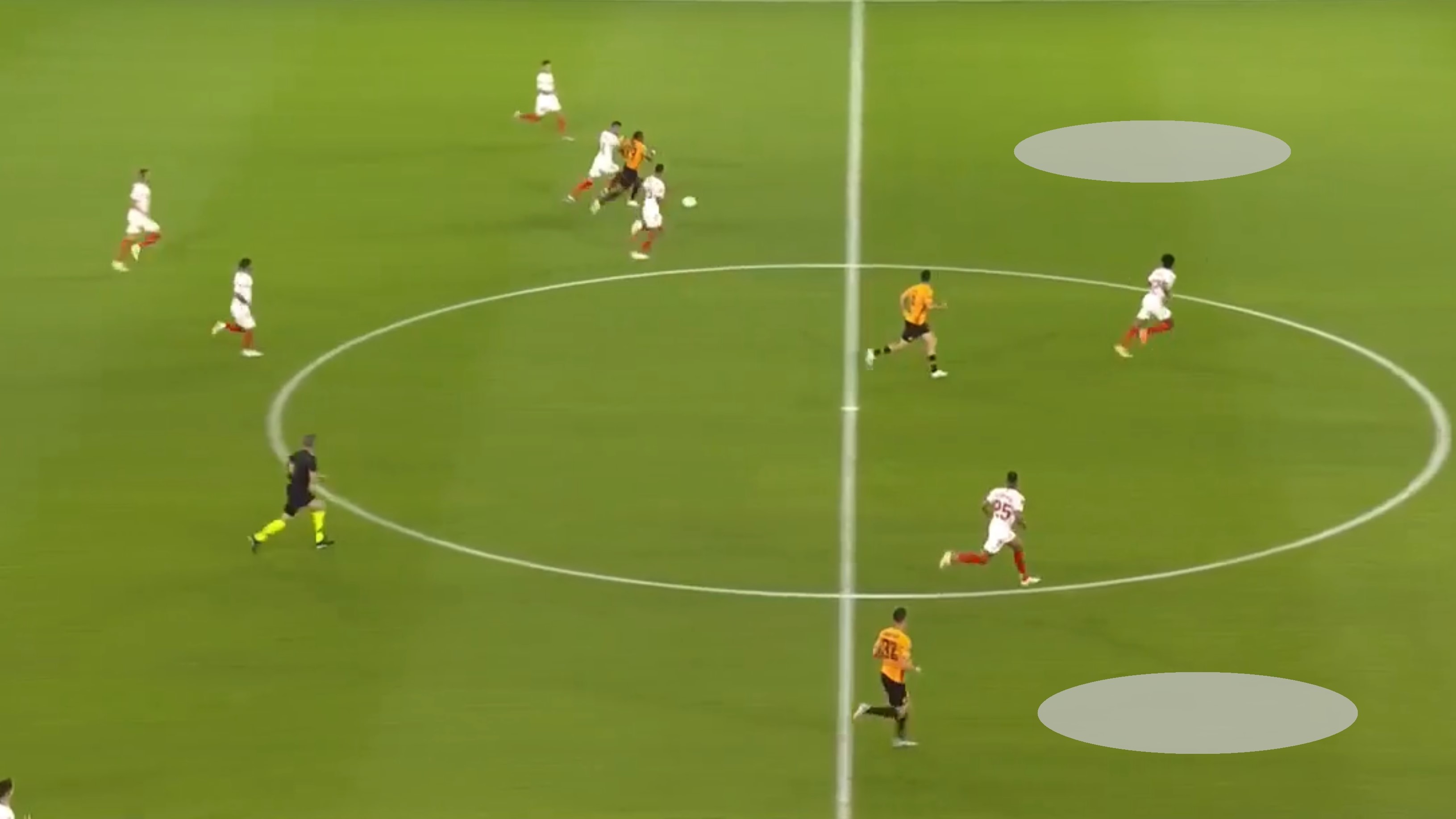 Solskjaer has often employed a 3-4-1-2 system in big games this season, most recently in the FA Cup semi-final defeat to Chelsea where he left Paul Pogba, Anthony Martial and Mason Greenwood on the bench to pursue a more defensive approach that evidently didn't work. This time around he may want to stick by the 4-2-3-1 he otherwise prefers, allowing for his best attacking talent to exploit spaces in transition.

Sevilla play in a 4-3-3 that sees both full-backs provide the attacking width while the wingers, Lucas Ocampos and Suso, come inside. In midfield, Joan Jordan likes to attack the box while playmaker Ever Banega has a very fluid role. Sometimes, as seen above, this leaves them without good cover in transition, and Marcus Rashford, Martial and Greenwood will feel confident of exploiting any gaps with fast breaks and 1v1s against Sevilla's centre-backs.

HOW TO STOP BANEGA?

Banega is absolutely vital to this Sevilla team. In 2019/20 La Liga action, he played 67 passes on average. This was considerably more than any of his teammates – the nearest to him in this regard was Diego Carlos with 54.3. Additionally, none of his colleagues play more than his 1.8 key passes per game.

The stats underline the reality that most of the Spanish outfit's possession flows through their diminutive Argentine. In build-up, he often drops into the left-back position to receive out from the centre-backs and break lines with penetrative passes to the front three. Then, further forward, he has the vision and execution to pick out the attackers with balls into the box. Indeed, it was his cross that led to Ocampos' headed winner against Wolves.

If Manchester United want to make the Europa League final, they would be wise to find a way of limiting Banega's supply. Unfortunately they no longer have Ander Herrera's services, so can't simply stick him on Banega for a 90-minute man-marking job. The closest player to Herrera now is Scott McTominay, but Solskjaer is unlikely to upset the balance of his midfield by taking out Pogba, Bruno Fernandes or Nemanja Matic to make room for him.

Instead of man-marking Banega, then, United will just have to be organised and ready to put pressure on him wherever he goes. If he drops into the left-back spot, that probably means Fernandes or Greenwood stepping up to press. If he moves forward, Pogba or Matic may have to take responsibility.

Whatever method they go with, if it doesn't work and Banega gets time to look up, he will progress Sevilla's attacks well with diagonals, line-breaking passes and accurate balls into the penalty area.

Banega is undoubtedly critical to his team's build-up play, and if Manchester United can stop him they will disrupt the flow of Sevilla's possession. But they also need to be mindful of Suso. The Spanish winger likes to drift inside from the right and find pockets. He has a good connection with Banega – he finds space, and Banega finds him. 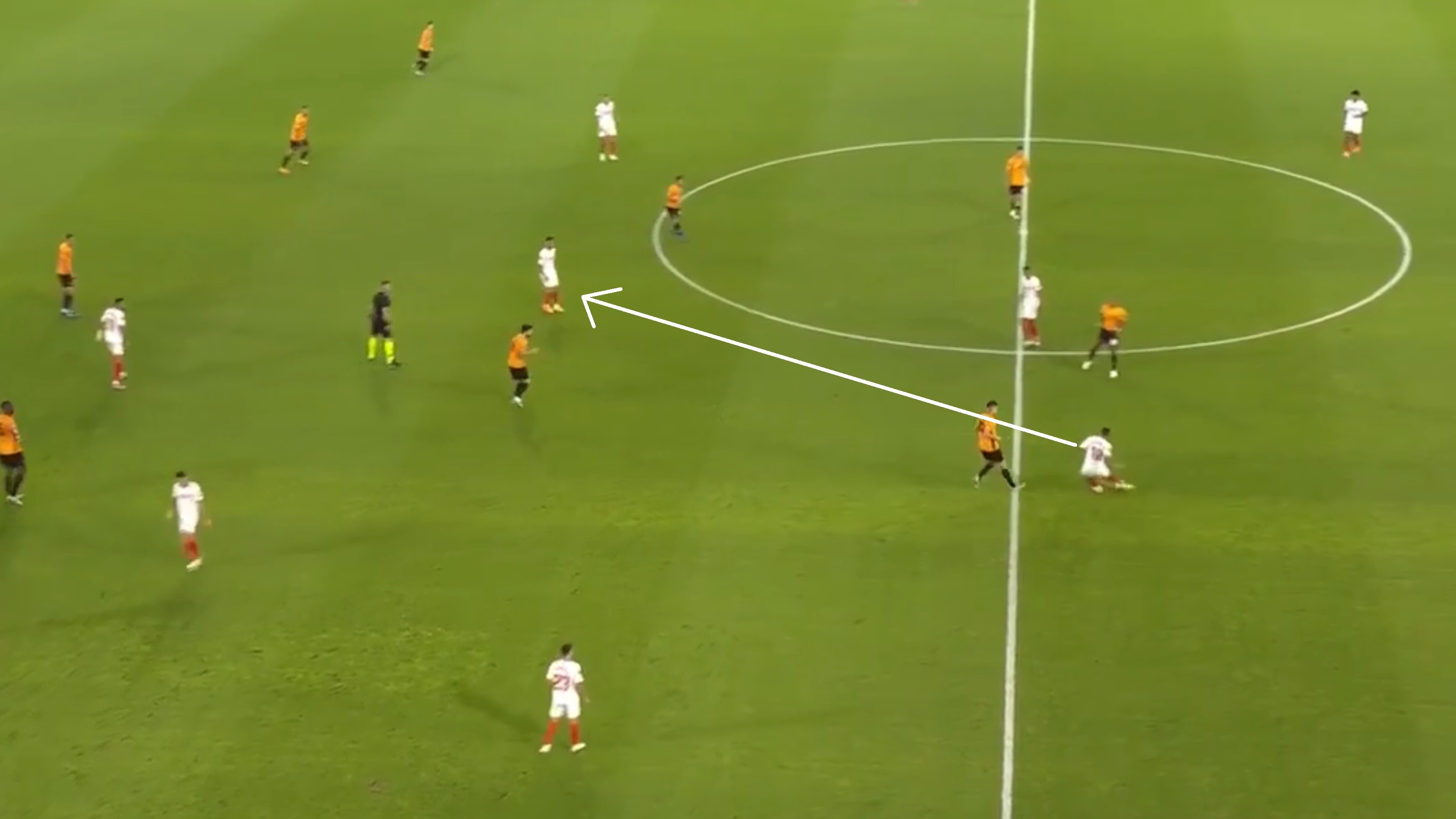 Suso is naturally left-footed and has an excellent cross and long-range shot. He showed flashes of both against Wolves, and Solskjaer will need his defence and midfield to be aware of this threat.

Asking Brandon Williams to track Suso is a difficult ask, not only because Suso comes so far in, but because Jesus Navas will just overlap into any space Williams leaves open and provide cross after cross. At the same time, Matic and Pogba will have their own battles to win in midfield. So the most obvious solution is to stay compact as a defensive unit, minimise the space between the lines and block Suso out.