Manchester United were supposed to be back. Ole Gunnar Solskjaer was seen as a United man who knew the club, understood both the demand for trophies and the expected playing style, and after his appointment results temporarily improved. But a sharp downturn at the end of last season has been followed up by a borderline-disastrous start to this one, leaving United in yet another crisis.

Of the multiple problems associated with United's play this season, the most significant has been their inability to break teams down. They are regularly handed the initiative by opponents, but fail to utilise this position. Generally, they are at their most dangerous when they don't have the ball, but this alone isn't enough to win consistently considering how frequently they dominate possession virtually by default.

United's recent 1-1 draw with Liverpool exemplified the sort of team they want to be. Solskjaer lined his side up with Marcus Rashford and Daniel James acting as the focal points of their attack. The presence of two direct dribblers with pace – dubbed 'The Turnover Twins' by Martin Tyler – atop the frontline indicated the team's focus on quick transitions.

The ploy worked, as a point was gained against a side that had won all of their previous eight league fixtures. A similar approach worked wonders on the opening day against Chelsea, where United won 4-0. Every single one of their goals that afternoon came in transition, with the speed of Rashford, Anthony Martial and Jesse Lingard at the forefront of the victory.

Below are some graphics that underline how well the transition game worked.

Here is where goal one came from. United won the ball just inside their own half and broke instantly. Nine seconds on from this scene, Rashford won a penalty, which he converted. 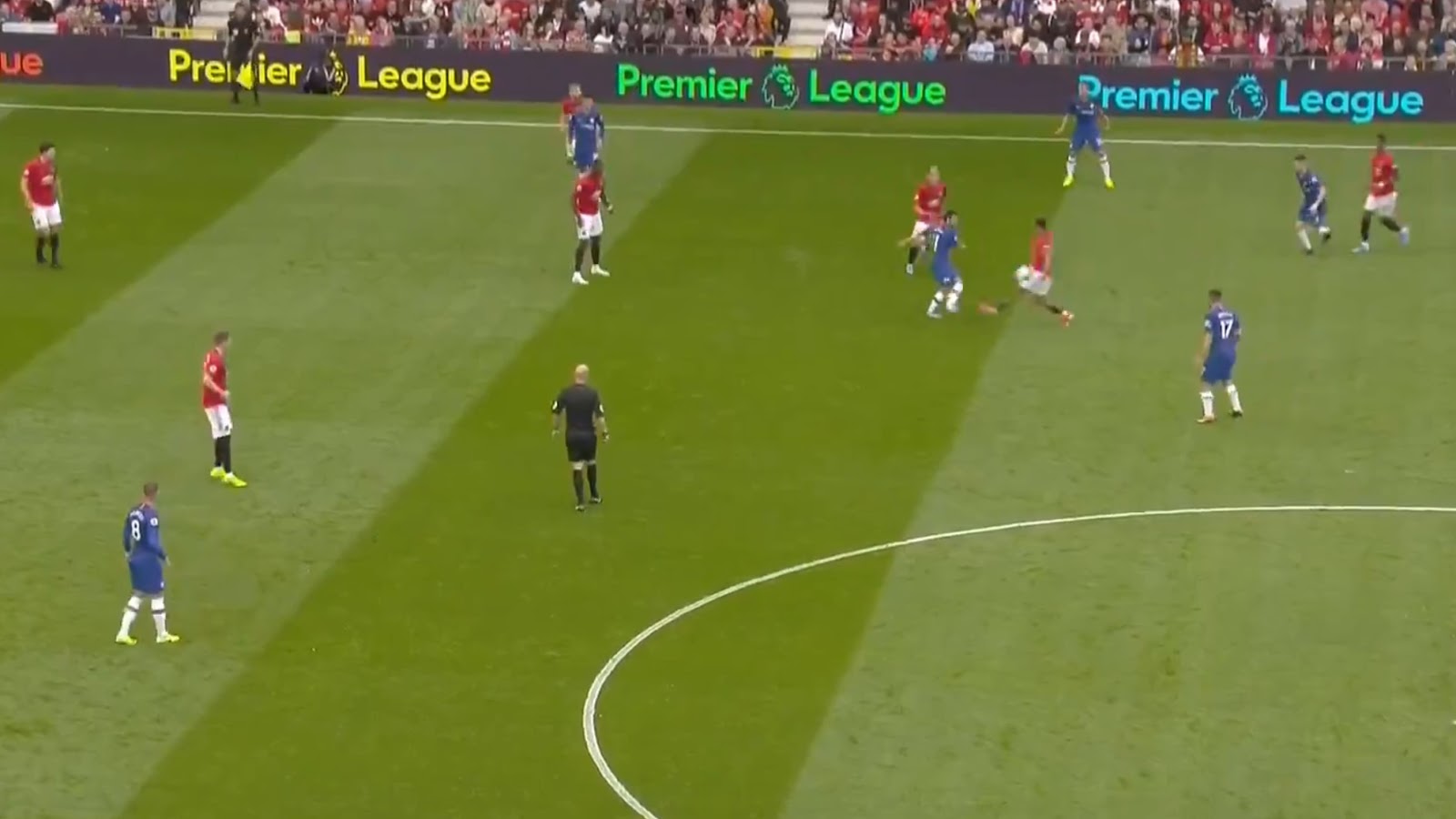 Here is where United's second goal came from. Harry Maguire steals the ball from Tammy Abraham just outside United's penalty box, and a counter-attack begins. Within 16 seconds, the ball has hit the net courtesy of Martial. 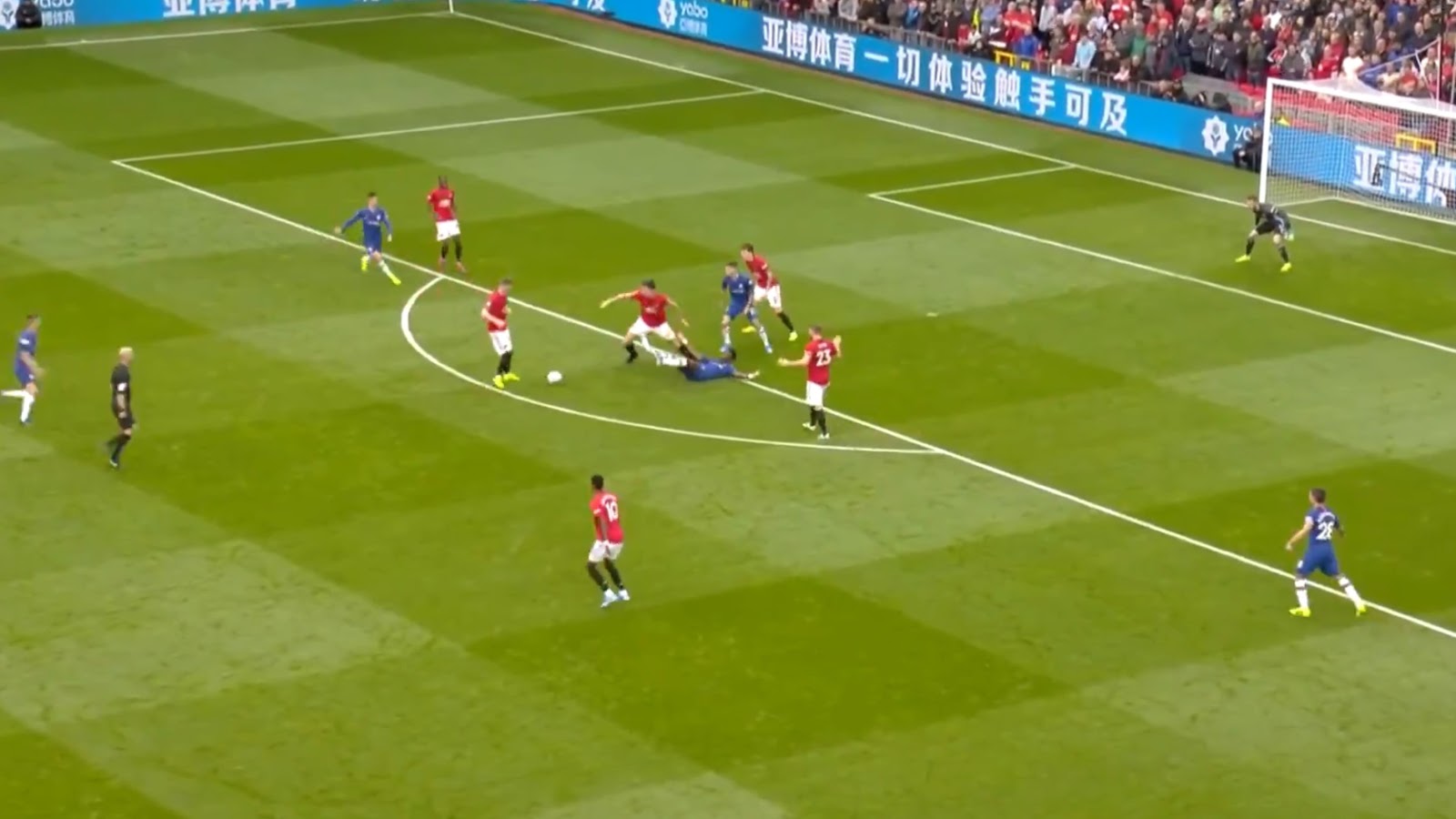 And here is where United's fourth goal against Chelsea began. Inside their own box. From here Luke Shaw passes it down the wing, and James scored within 17 seconds of United regaining possession. 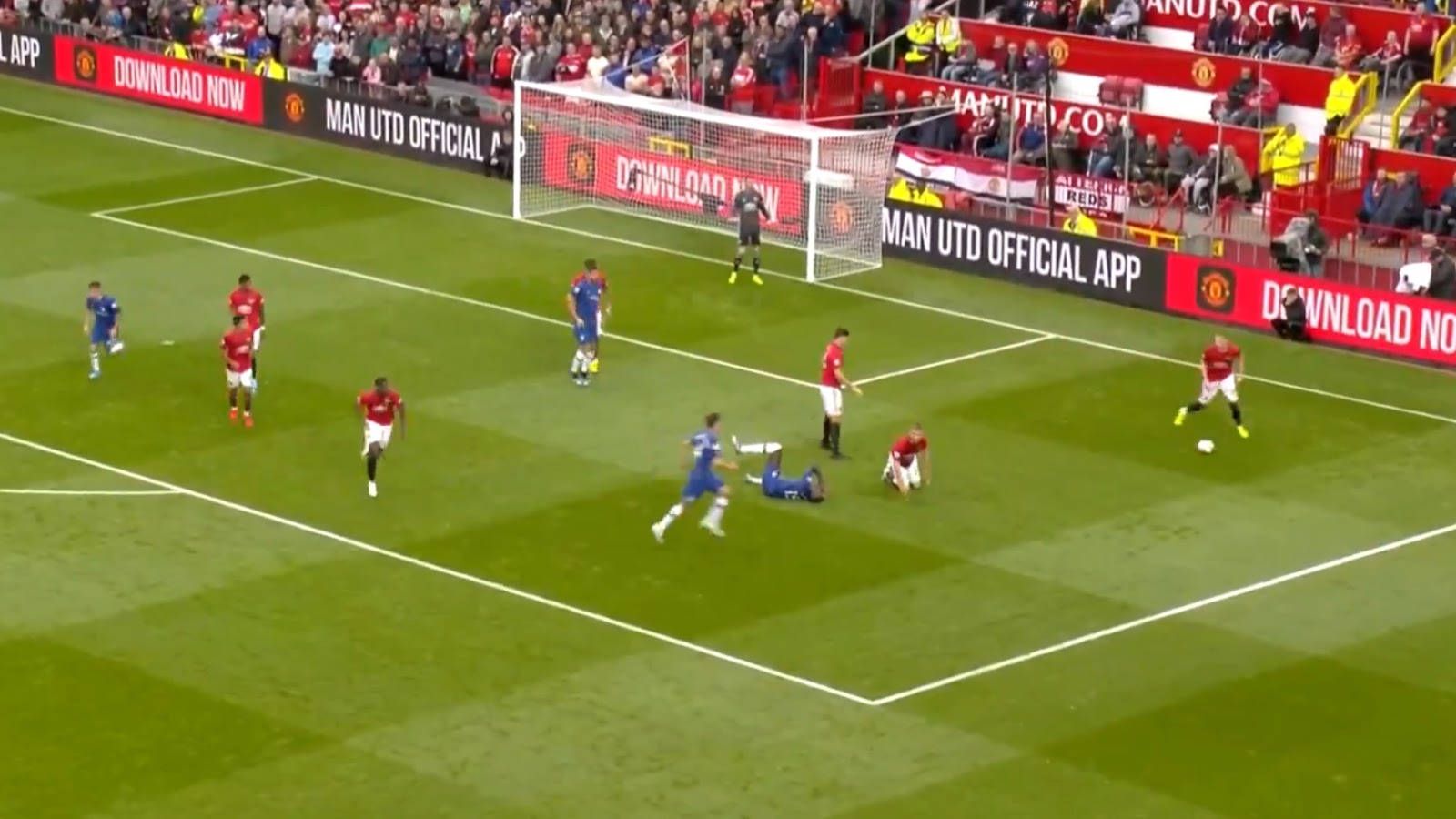 United love these games. The opponent looks to build out from the back with short passes into midfield. United then try to win the ball through tackles, interceptions or pressures, before immediately attacking the space in a disorganised defence using the lightning speed of Rashford, Martial, James and Lingard. Unfortunately, these games are all too rare.

After David Moyes' short tenure, Louis van Gaal implemented a positional attacking game. Under the Dutchman United were the protagonist in games more often, but regularly had a lot of ineffective (and dull) possession. This not only meant a failure to win the league – or get anywhere close to doing so, for that matter – but a failure to engage the fans.

Then came Jose Mourinho, with his own special brand of pragmatism. He implemented a rapid transition game that peaked in 2017/18, when United looked unstoppable on the break with Romelu Lukaku attacking space and Paul Pogba picking him out. They got as high as second place, but a failure to sustain that form and a perceived negativity in big games led to Mourinho's demise.

Solskjaer seems to have positioned himself somewhere between Mourinho and Van Gaal stylistically. However, what's left is a United team that aren't quite as effective defending and countering as under Mourinho, and not quite as effective in possession as under Van Gaal.

A more detailed breakdown of United's possession struggles is shown in the table below.

United had just 32% of possession against Liverpool, and sealed a solid point. They had 42% and 46% against Leicester City and Chelsea respectively, and won both matches (their only league wins this season). But their results get gradually worse the more they dominate possession.

Other numbers help us to understand Manchester United's in-possession struggles. Firstly, they tend to attack in wide areas. This is because they can't penetrate through the centre due to individual and structural issues. I looked more into WhoScored's numbers to confirm this.

Attacking out wide like United do is fine, but the distance to goal is larger if you enter the final third on a wing as opposed to entering it via the central channels. So if you do progress out wide, you'll probably need good targets to hit in the box to have a chance of racking up shots from these attacks.

Having sold Lukaku, United don't have one single aerial threat in the opposition box to cross to. This explains why they aren't particularly cross heavy. While only two teams (Norwich and Sheffield United) attack more down the wings, nine teams are more cross-heavy (I measured this as I did with through balls: by dividing average minutes in possession per game by average crosses per game).

Unable to play through teams, but similarly limited when it comes to crossing in from wide, United are restricted to shots from poor locations. Only Leicester and Aston Villa hit a higher proportion of their shots from outside the box than United's 47%.

Without Lukaku and the injured Pogba's late runs, Manchester United don't have the penalty box presence to be effective with a wing-based attacking strategy. They need to play through teams more often, but how can they do that?

Firstly, they need to wrap Pogba up in cotton wool. The French playmaker has been unfairly maligned throughout his second spell at Old Trafford, because the truth is he is their only penetrative passer. He averages 2.6 key passes per game, and 0.6 through balls per game, and none of his teammates come close to him in these categories.

Pogba's assist for United's third goal against Chelsea, depicted below, perfectly showcased his ability to take out multiple lines of defence with a pass, which is a wonderful trait to have when the rest of the team collectively can't take out one line. 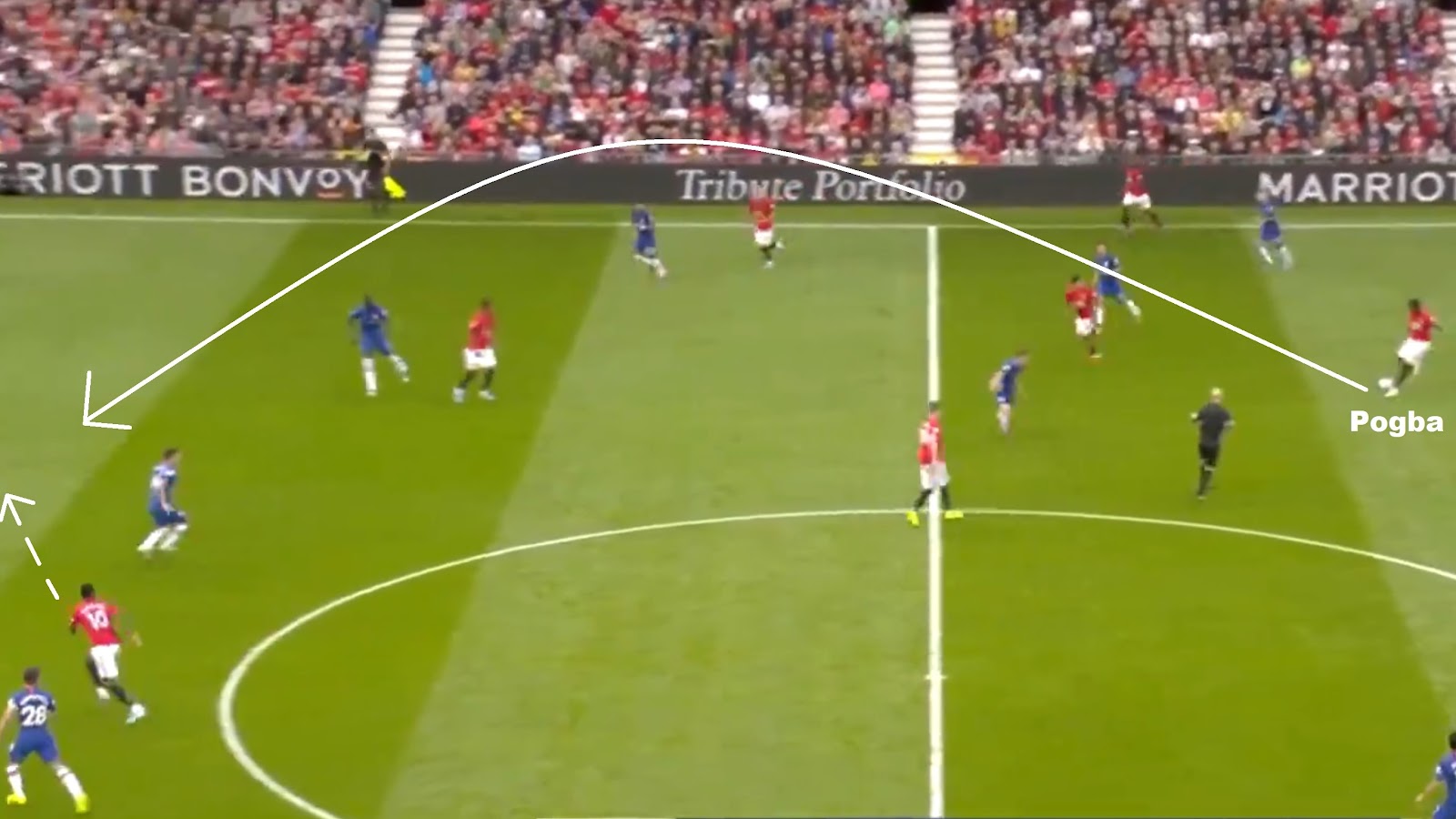 The profile of United's two main striker options show unfortunate similarities. Both Rashford (as seen above) and Martial like to linger on the shoulder of the last man, both use their pace to make runs in the channels and get in behind, and both prefer to move from left to right onto their favoured right foot. Neither are particularly strong, and neither thrives with their back to goal.

Rashford and Martial aren't the types to shrug off a marker and hold the ball in before playing lay-offs to runners. They need to be played in behind, and in order to do that – particularly without Pogba – United need to get better at breaking the opposition's midfield line to set up through balls to the strikers.

One way of doing this is to improve decision-making in the second phase of build-up. Here, Ashley Young receives the ball on the left flank. There's an easy pass inside to an un-marked Fred, who could then play through Newcastle's midfield to James. Instead, Young goes long down the wing and the ball goes out for a throw-in. 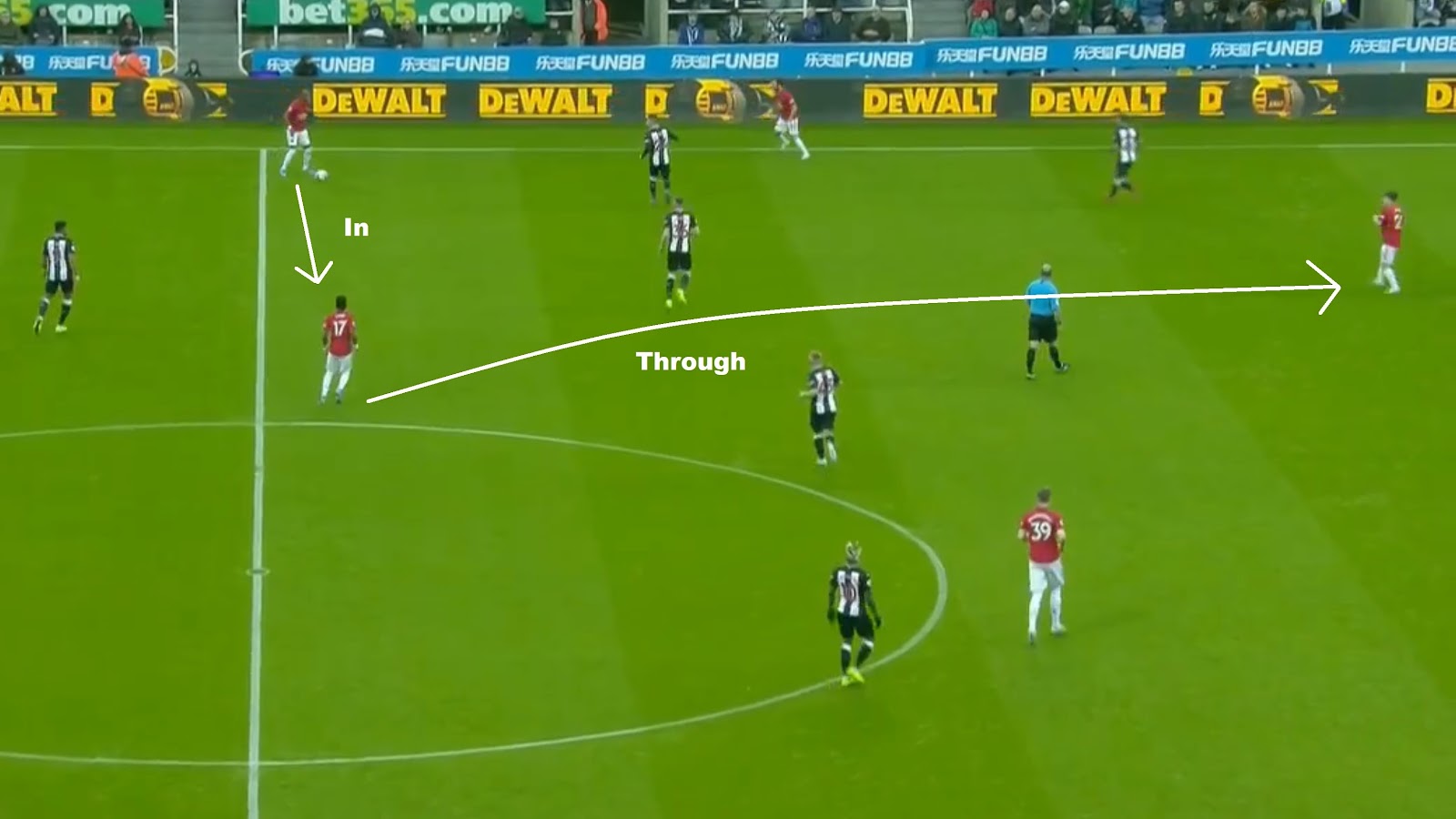 Another way is to improve the movement from the more advanced players. Below United get three players into central areas to act as possible receivers of passes through Newcastle's midfield line, but none of the three make runs to show for the ball or drag the defenders back, and are therefore easily marked. 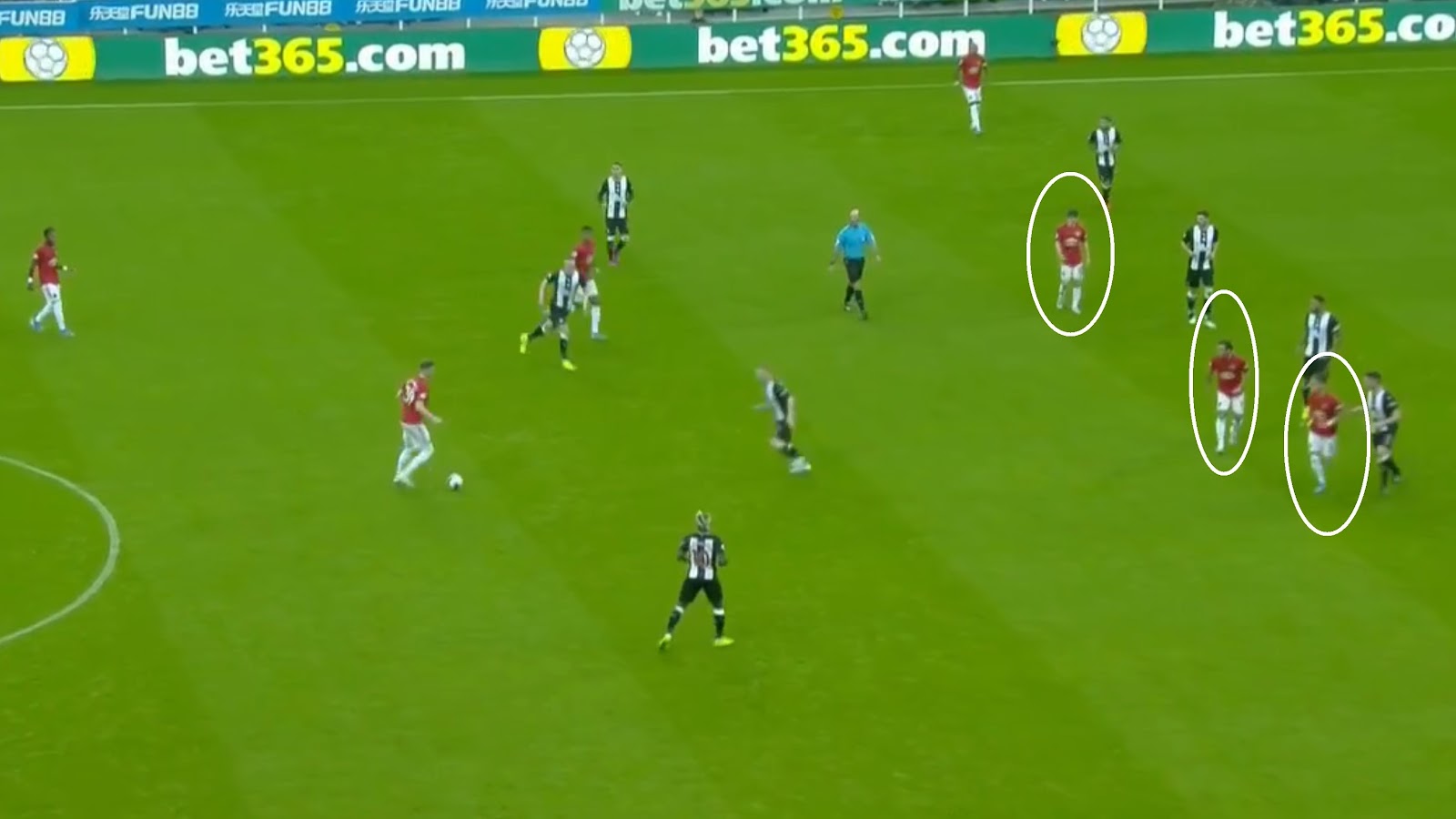 Below is an example of a player simply not being used to the role asked of him. James earned his move to Manchester with good form for Swansea playing as a winger who got in behind from wide through his pace and dribbling. Now he's being asked by Solskjaer to drift inside and receive centrally, but he isn't yet aware enough to find separation in congested areas. Here he moves in and ends up behind a defender, completely inaccessible for Juan Mata, who has the ball wide left. 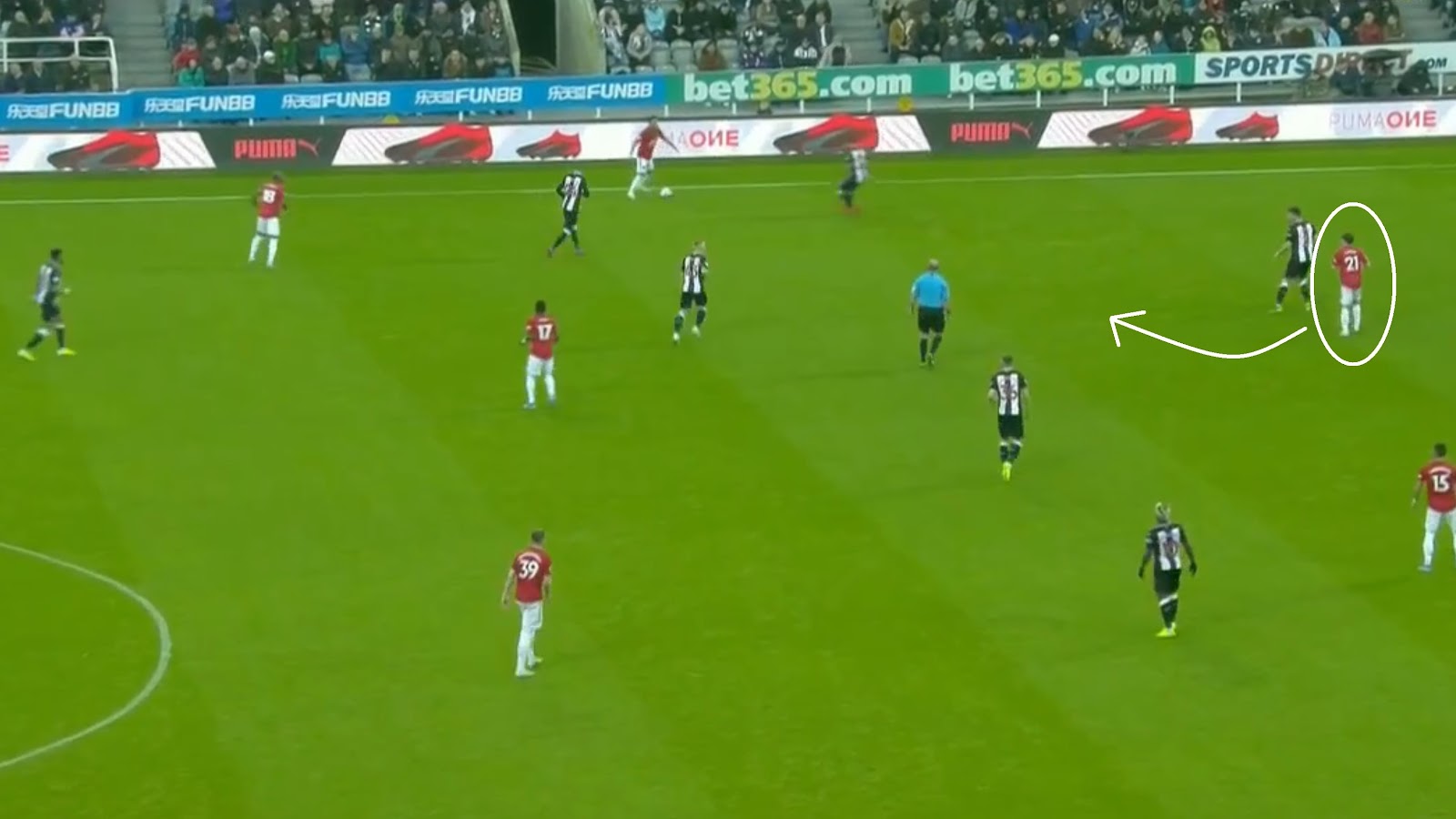 Keeping Pogba fit and improving the decisions made on either side of opposition midfield lines can help United break through teams and use possession more effectively to set up chances for their very specific striker profile. Failing that, they need to do much better from set pieces. They are one of only four Premier League teams not to have scored from a corner or free kick this season. If open play isn't working, dead balls offer an alternative route to goal that Solskjaer cannot afford to overlook.

'AND SOLSKJAER HAS WON IT'…OR HASN'T HE?

Within the squad there's a lack of imaginative midfielders beyond Pogba, and there are no natural number 10s to float between the lines. Furthermore, selling a striker that can play with his back to goal and bring others into play (Lukaku) and backing Rashford and Martial, two strikers who prefer to face goal and run behind or at defenders, smacks of a counter-attacking approach. So too does signing a winger like James.

Being excellent in transition just isn't enough for Manchester United. As a team that face a lot of low blocks, they need other methods of attack to notch up consistent wins, whether that be going more direct and playing off a target man, going wide and crossing, or playing through the lines.

Solskjaer's great challenge will be rounding out his team's attacking game. If he can, he could turn around a sinking ship. If he can't, he might become the latest manager to leave Old Trafford prematurely.