After Liverpool's 3-1 win over Arsenal, Sky Sports pundit Roy Keane suggested the reigning English champions' performance had been a bit 'sloppy'. Jurgen Klopp didn't take well to the use of that word. "I'm not sure if I heard it right, maybe you spoke about another game, it cannot be this game," he said. "Nothing was sloppy."

The speed with which Klopp picked up on that word, and the shortness of his reply, was curious. Keane simply pointed out what was plain to see – that Liverpool had given up a few chances. It didn't warrant such a strong denial. But perhaps Klopp's response hinted he knew something nobody else did. Yet.

One week later, Liverpool were beaten 7-2 by Aston Villa. It was a stunning result, one many considered a one-off given the champions had won their opening three Premier League games. However, there's plenty of evidence to suggest it wasn't an anomaly, but instead a warning sign. Keane was right: Liverpool have been sloppy.

Aston Villa only just avoided relegation from the Premier League last season. They may have bolstered their squad since, but the truth is that for them to beat Liverpool by five goals, Liverpool need to be well below their best.

Analysing the game, there were five major flaws in Liverpool's performance on the day.

The description may not go down well with Klopp, but two of Aston Villa's goals stemmed from sloppy build-up play. Their first came from a poor pass from stand-in goalkeeper Adrian, which was intercepted and led to a strike from well inside the penalty box. And their fifth may have involved some nice combination play between Ross Barkley and Jack Grealish, as well as a deflection, but the move all started after an unnecessary giveaway.

Joe Gomez tried to play into Gini Wijnaldum, but he didn't put enough speed on the pass and Ollie Watkins, who is circled here, was able to come back, slide in, and intercept the ball. 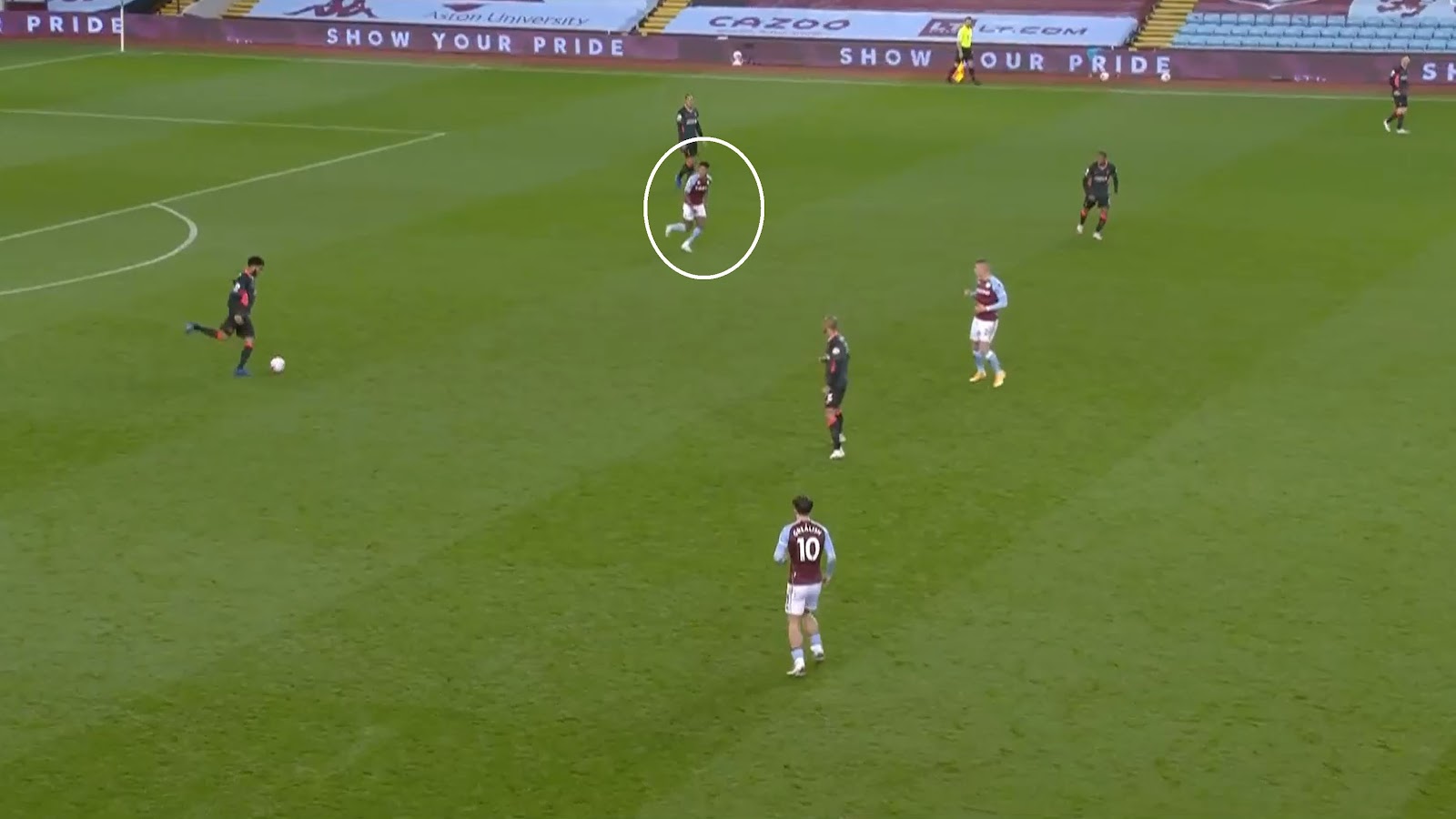 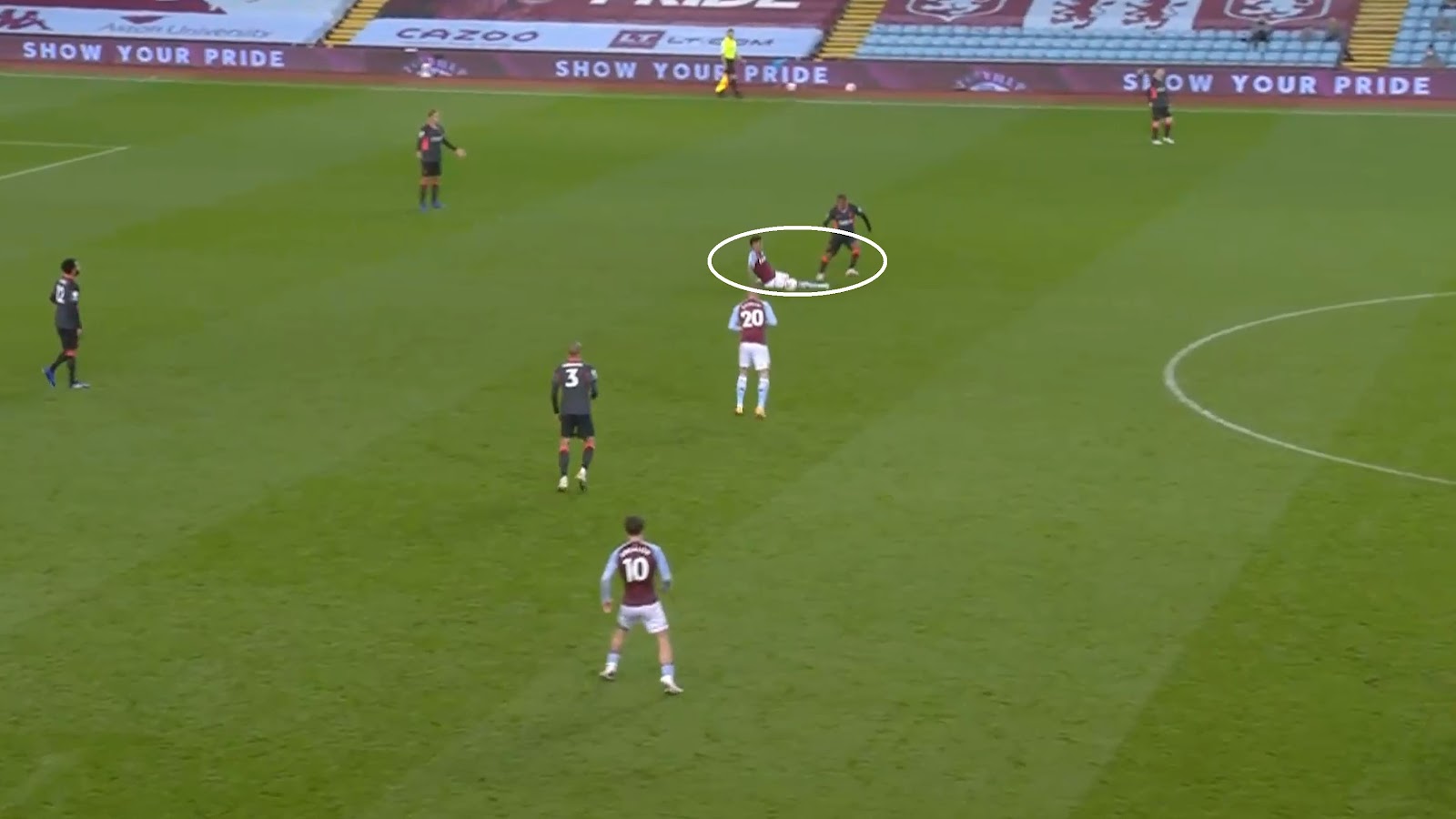 Between Villa's first and fifth goals, there were more preventable errors in Liverpool's play. For the home side's second, Trent Alexander-Arnold switched off and left space behind him for Watkins to run into. That wasn't the only individual defensive error – in the eighth minute Joe Gomez had failed to correctly judge a long ball, getting under it and letting Grealish receive the ball behind him.

Going back to Alexander-Arnold's error to let Watkins in, Liverpool's back line also tried and failed to play offside. Here we see Gomez trying to hold his position as much as possible, with Virgil van Dijk and Andrew Robertson in the same line, only for Watkins to time his run and get in behind to score. 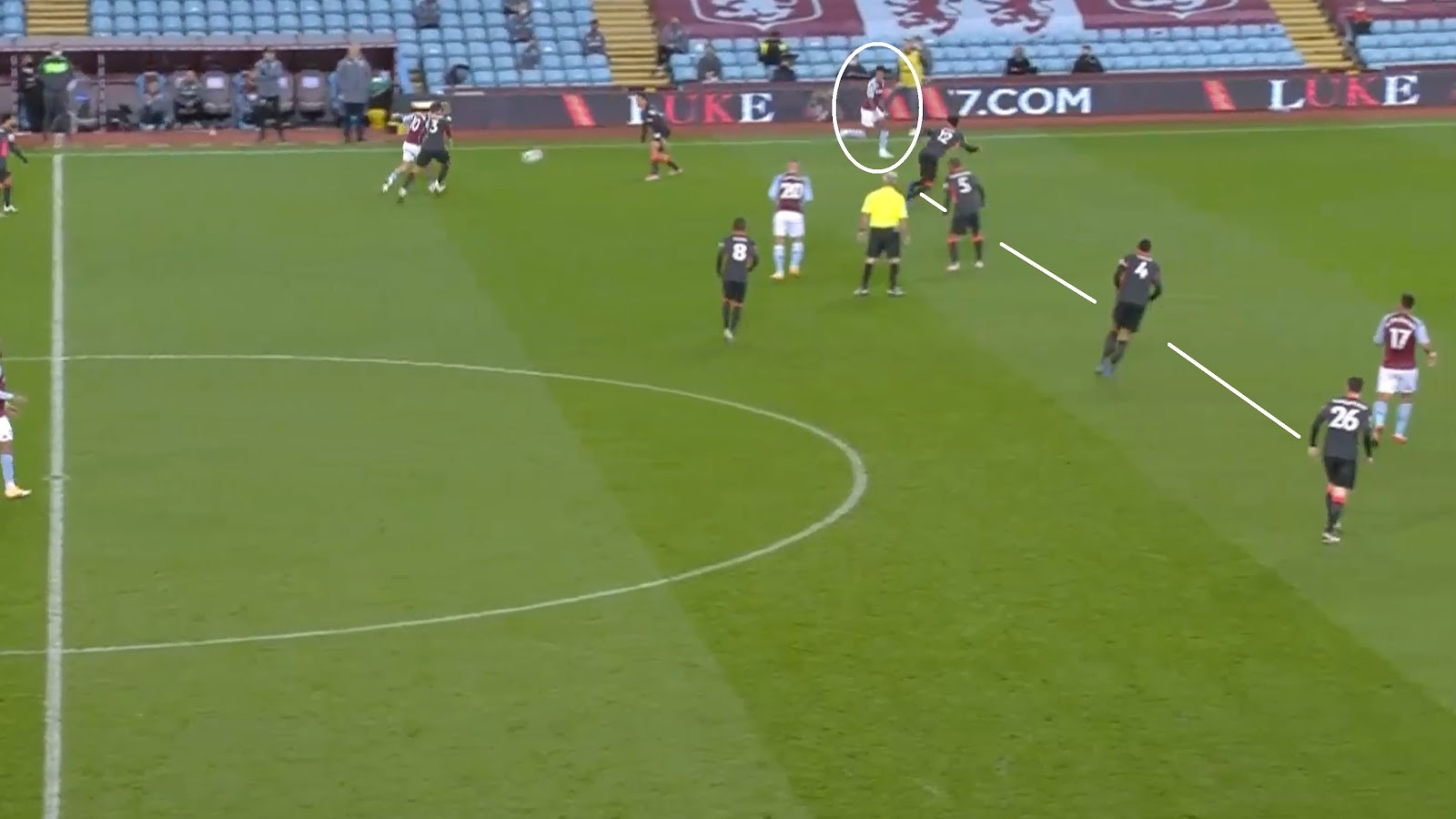 We saw another failed offside trap for Aston Villa's seventh goal, and this was after Villa spurned a glorious one-on-one opportunity with Adrian brought about by a run in behind Liverpool's last line.

In this instance Villa transitioned quickly and Liverpool gave them plenty of space to hit. Fabinho tried to step up and play offside rather than go with the runner, but the runner came from inside his own half, so couldn't be ruled offside. Watkins got through, but his shot was saved by Adrian. 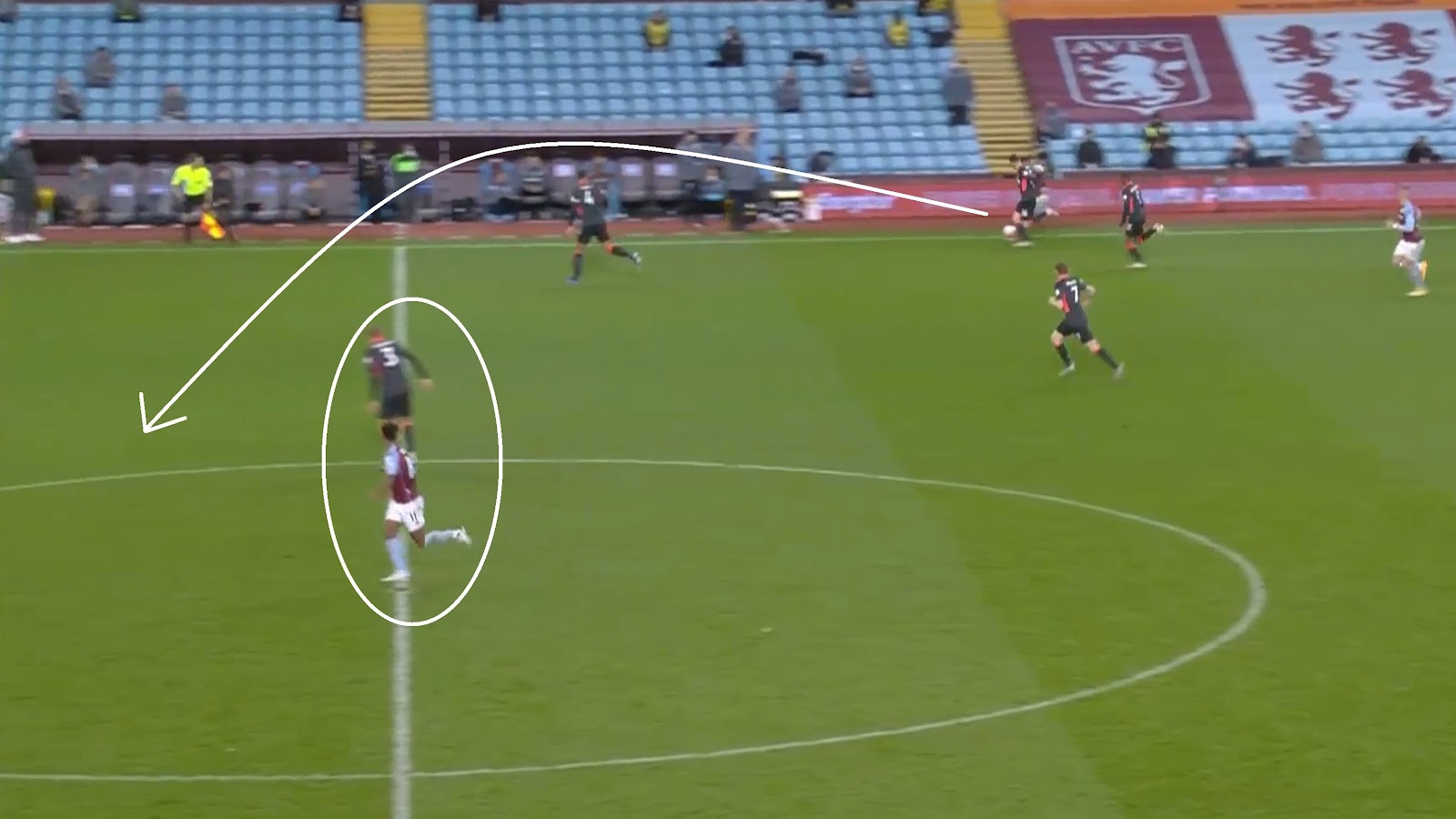 Liverpool tried to keep their last line as high as possible to squeeze space and set offside traps, but didn't always get pressure on the ball. This gave the opponent time and space.

Pairing a failing offside trap with the above is a pretty devastating combination, and it nearly led to another Villa goal.

Below we see Matty Cash has an age to pick his pass as there is no pressure on him whatsoever. Simultaneously, we see Barkley making a run in behind Liverpool's last line, and Gomez stepping up to try and play him offside. The trap failed, Barkley got in on goal to shoot, and Adrian turned it around for a corner which Villa scored from. 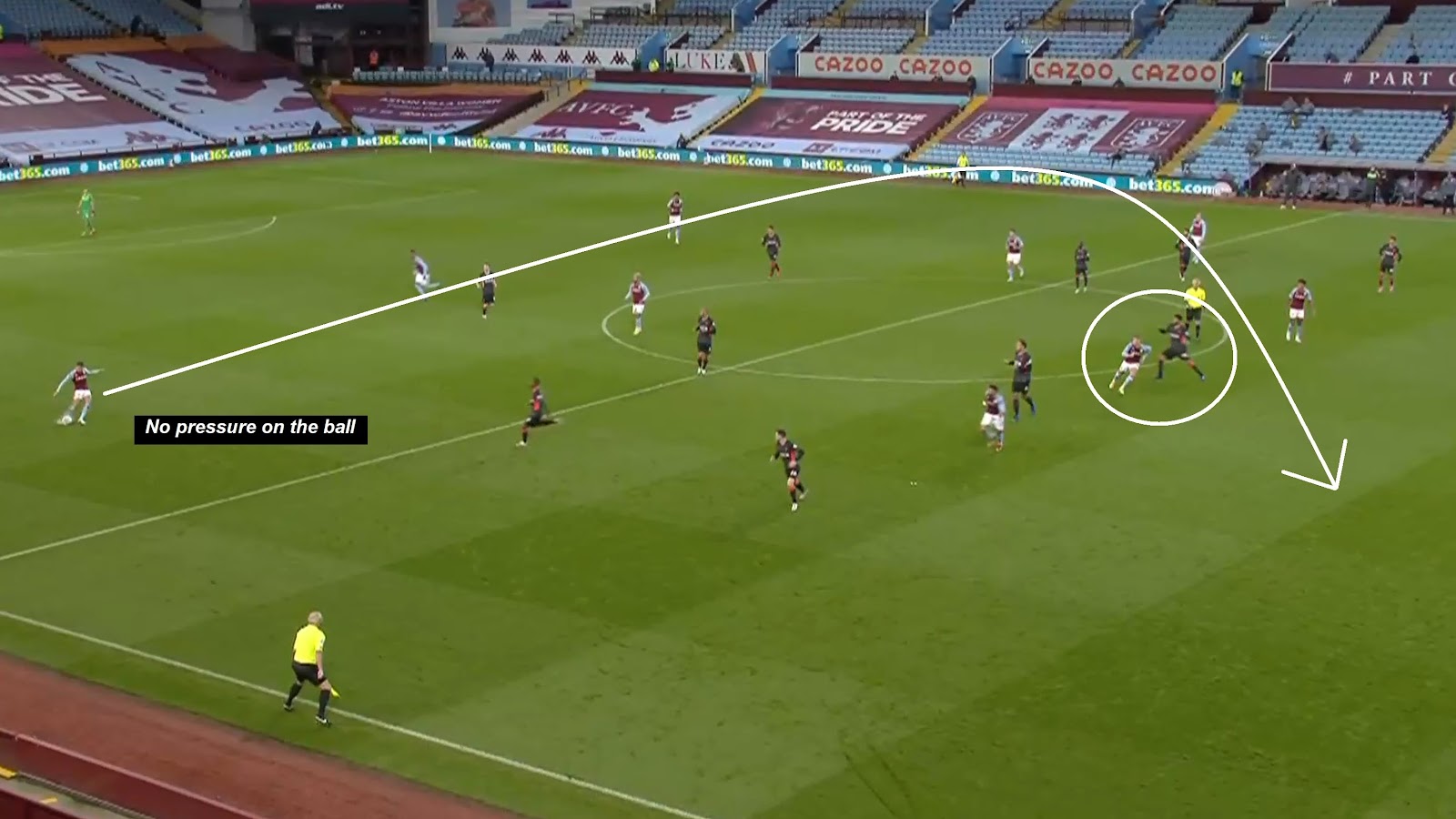 Finally, there was a concerning lack of run-tracking from Liverpool's midfielders.

In the first graphic below we see Fabinho next to Barkley after a Villa switch of play. Then, in the second graphic, we see them five seconds later. Barkley accelerated into the space between the lines and was free to receive and shoot as Fabinho lagged behind him. This is after half an hour and with the score still at just 2-0, so game-induced physical or mental fatigue isn't a viable excuse at this point. 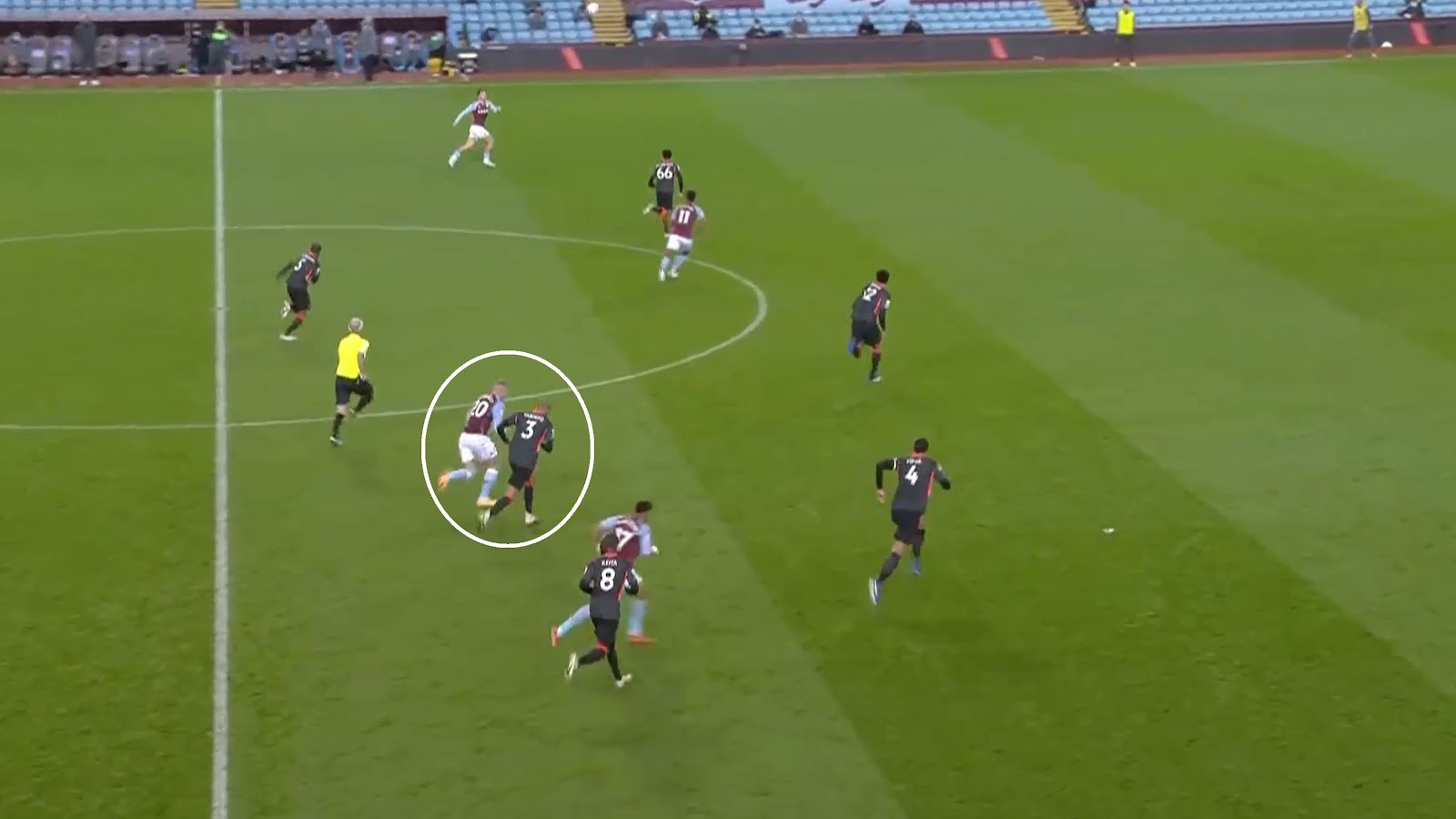 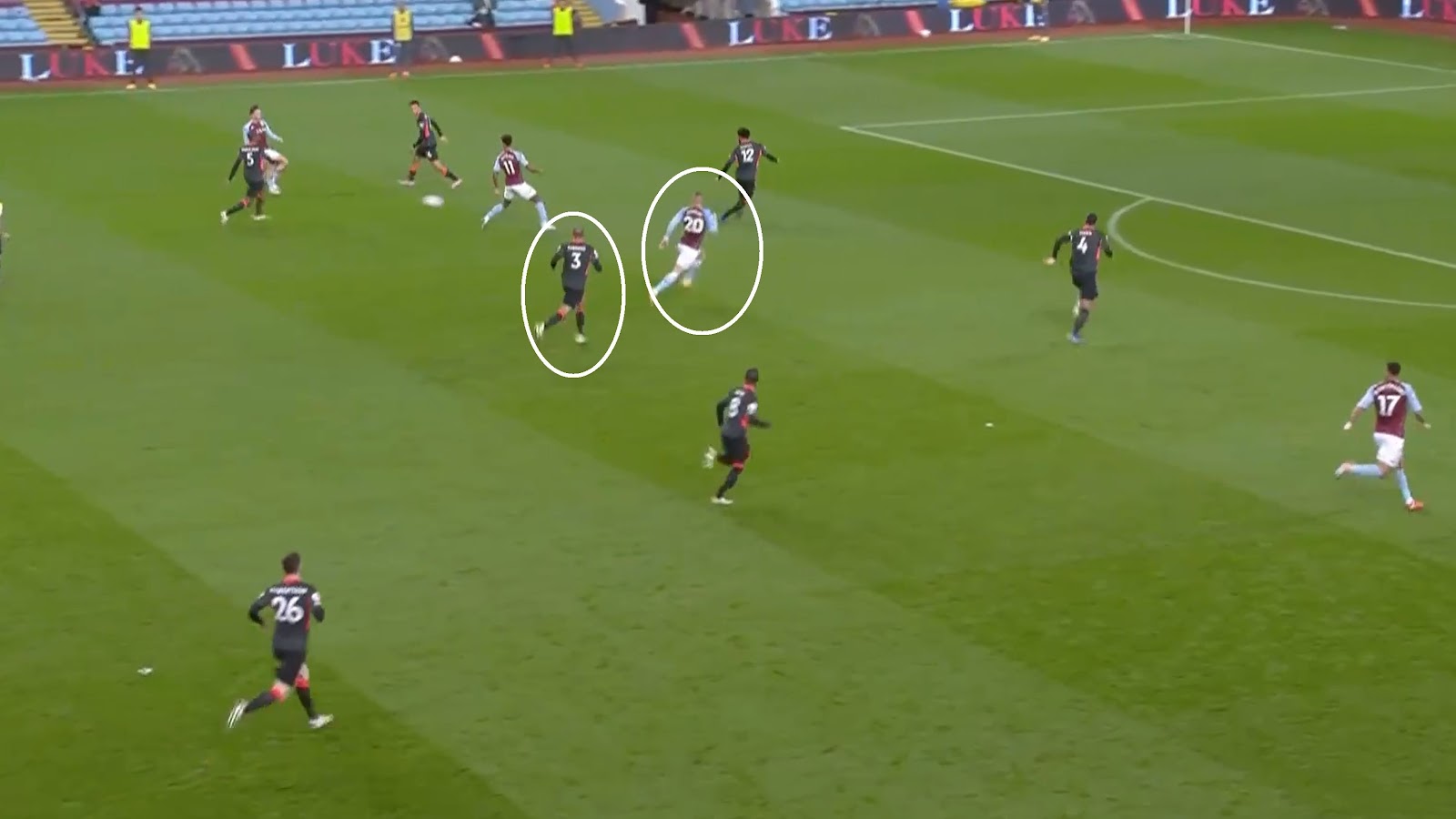 Klopp's men let in three in their opener against Leeds, and one against Arsenal. Even when dominating 10-man Chelsea they managed to concede a penalty, which Alisson saved. And that's just the goals and penalties they've conceded – they've also conceded a good amount of chances that went un-punished.

What will be most concerning to Klopp is that the goals and chances they are conceding are the result of recurring themes. The issues exploited so ruthlessly by Aston Villa were on show in their opening three Premier League games, albeit to different extents.

In the build-up to Leeds' first goal, Kalvin Phillips got far too much time on the ball to turn and pick a pass. There was absolutely no pressure on him whatsoever. We see below the distance between Liverpool's midfield and Leeds' playmaker. It's all very un-Liverpool. 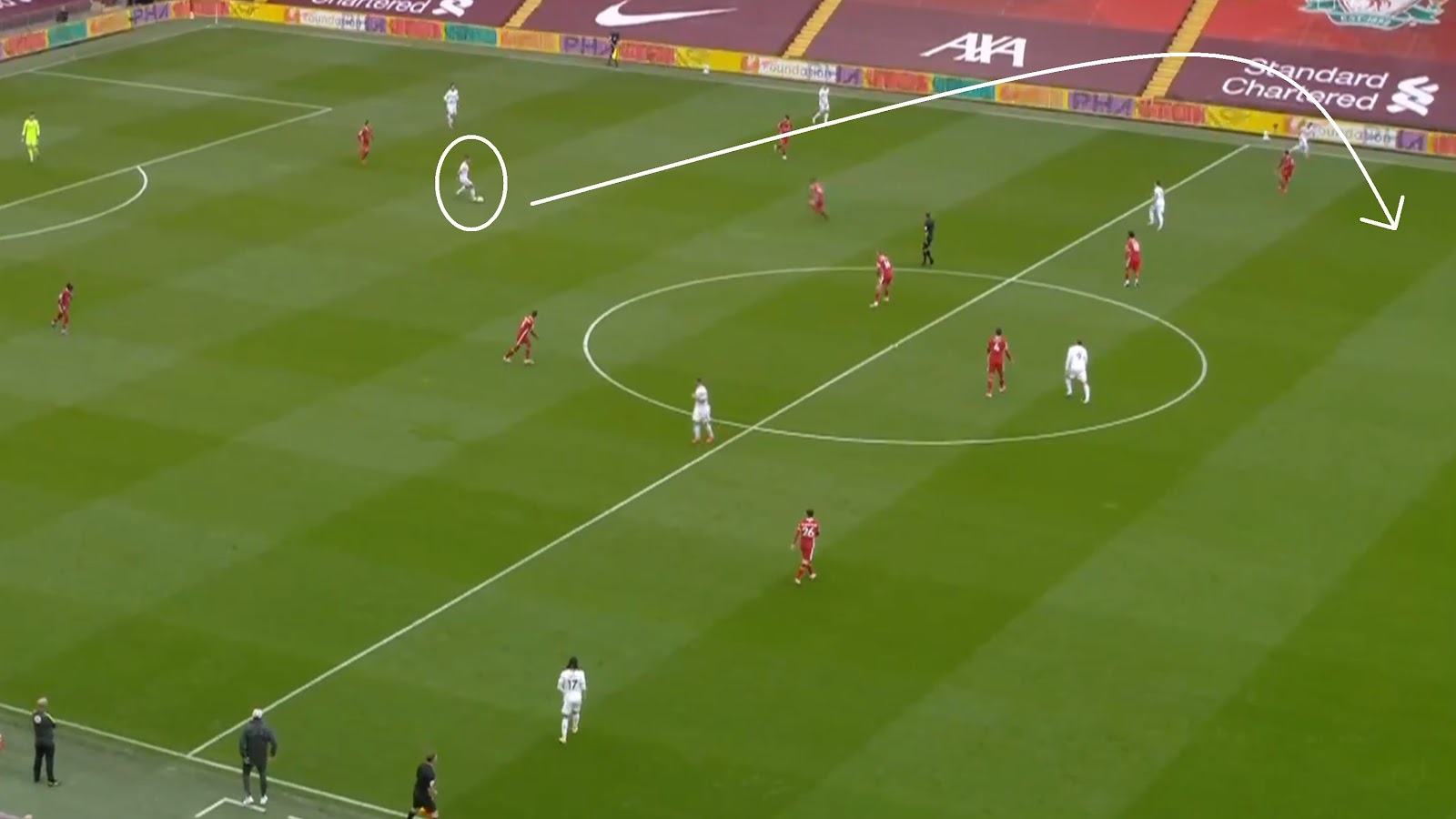 Leeds' second goal came about after Van Dijk failed to clear a ball over the top. It was an individual defensive error which gave Patrick Bamford a one-on-one chance to shoot and score. And Leeds' third came after Curtis Jones failed to track Mateusz Klich's run into the penalty box.

Arsenal's only goal came from yet another individual defensive error. First they played out of Liverpool's press and worked a dangerous 3v2 situation. From there they got a cross in, and Robertson's clearance fell to Alexandre Lacazette in front of goal.

But there were also a couple of clear scoring opportunities Arsenal didn't convert. And again they were avoidable. Most of the problems came from a combination of no pressure on the ball and a failed offside trap, as seen below. 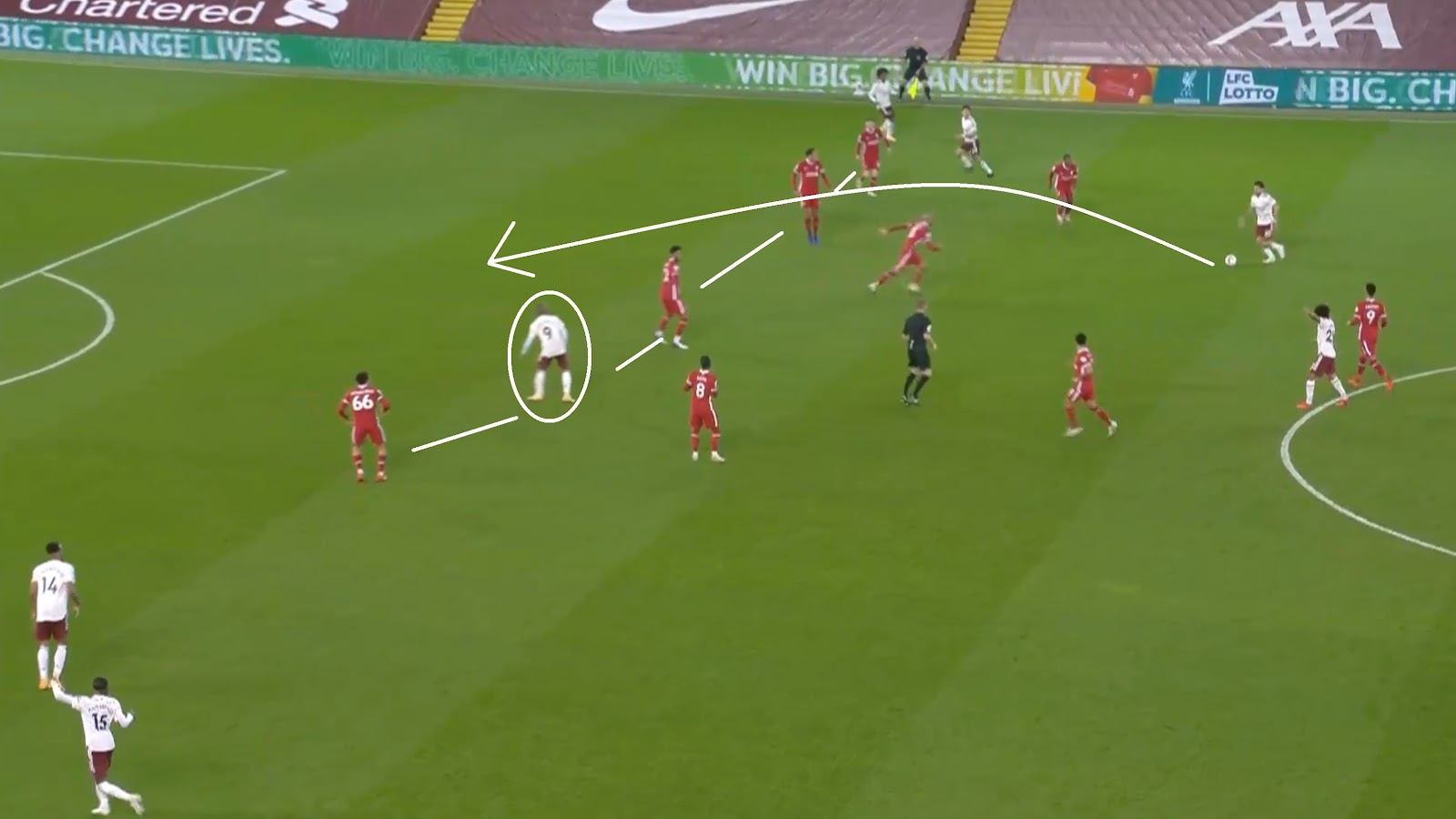 Here, Dani Ceballos has plenty of time to look up and spot Lacazette. Liverpool try to keep a high line and play offside despite the lack of pressure on the Spaniard, who slots a ball through for his teammate to get in on goal.

Even Chelsea, who were extremely unambitious in approach, had their moments against Liverpool. Here they have the time to pick a pass and again Liverpool's offside trap fails, with Fabinho leaving it too late to step up. N'Golo Kante gets in behind, and Timo Werner goes on to shoot. 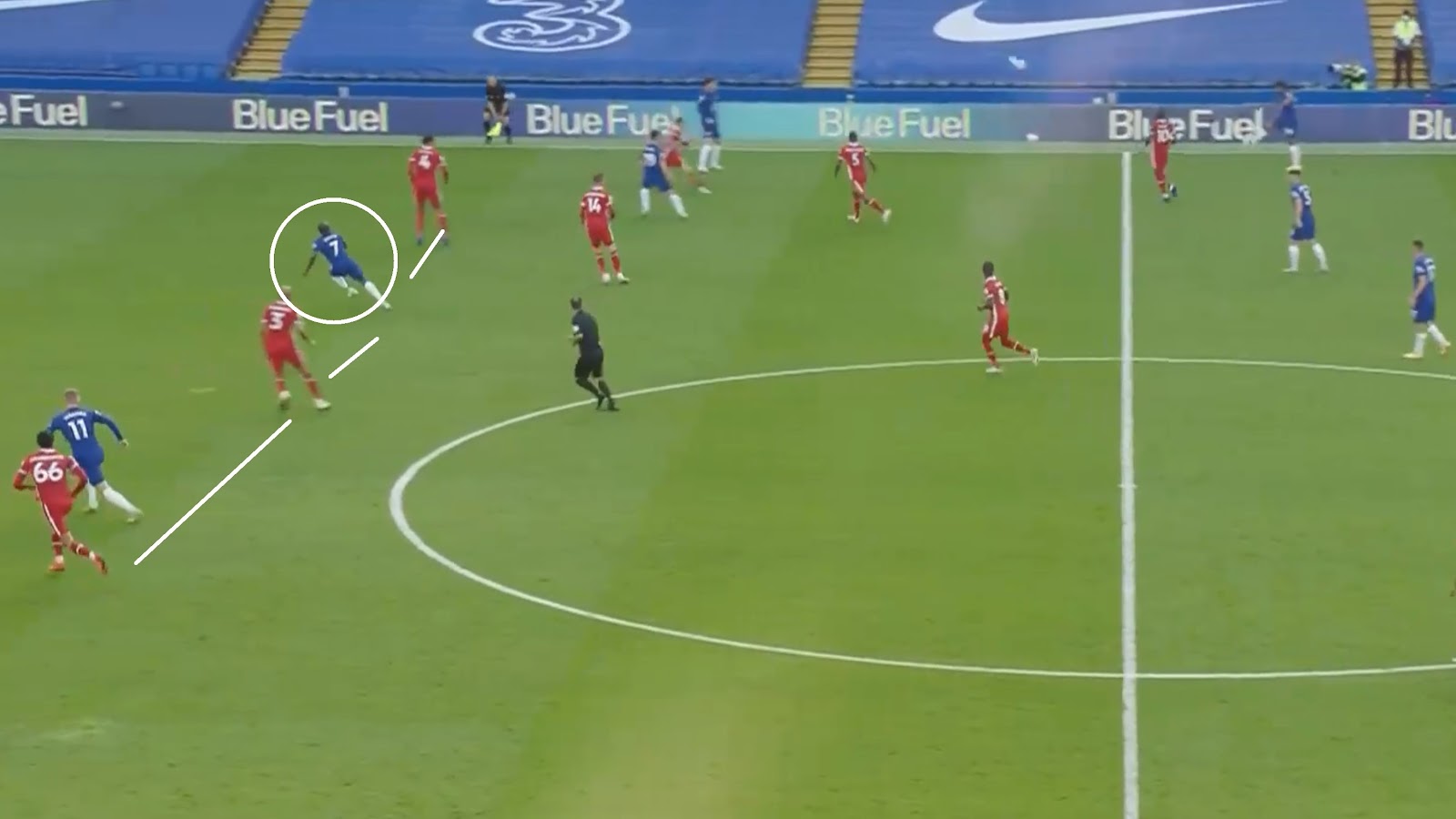 Arsenal, Chelsea and Leeds all had scoring opportunities and/or goals that were the consequence of Liverpool's poor build-up play, lack of pressure, failed offside trap, individual errors, or an inability to track runs. If the 7-2 defeat to Aston Villa was a horror film, Liverpool's first three matches were an effectively disquieting trailer.

Sometimes when analysing finished football matches with our eyes it's possible for conclusions to be exaggerated by 'outcome bias'.

We already know the result, so we're skewed towards finding faults that explain it. Then again, Premier League legend Roy Keane was calling Liverpool 'sloppy' before the 7-2 defeat to Aston Villa. His opinion wasn't influenced by outcome bias. Neither is the data.

According to WhoScored, Liverpool's possession average is down 1.3% from last season. They're not quite seeing as much of the ball. However, despite spending more time defending, they're making fewer tackles per game – 1.7 fewer, to be precise. They're also catching the opponent offside less.

These stats could be interpreted as backing up two notions touched on in this article: 1) that Liverpool's pressure has decreased and they therefore aren't winning as many duels and stopping the opponent so consistently, and (2) that their offside trap isn't functioning as smoothly as it did last season.

Wyscout has more in-depth data, and again a number of metrics underline ideas discussed in this article. Their PPDA (passes allowed per defensive action) has increased from 9.3 to 10.3. This suggests they are letting their opposition play more passes before being tackled, intercepted or pressured into a turnover. Their defensive duel success percentage has also dropped from 59.5 to 55.1.

The shot data is interesting, too. Liverpool aren't conceding more shots this season; in fact, they're actually conceding slightly fewer. But while the quantity of shots they allow has gone down a bit, the quality appears to have increased.

Their xGA (expected goals against) per shot conceded has gone up from 0.12 to 0.18. That doesn't seem like a lot, but it's significant. What it indicates is that opponents are getting clearer views of goal now, and that correlates with the amount of one-on-one chances Liverpool have conceded in their opening four games of this campaign.

PLUG THE LEAKS, RETAIN THE TITLE

Liverpool remain a fearsome attacking side. They've scored at least two goals in every league game this term. At times, particularly against Chelsea, they've looked outstanding going forward, and the signature of world class playmaker Thiago Alcantara will only boost them in that respect. But they need to plug the defensive leaks if they are to retain their title.

And so we go back to Klopp taking issue with one specific word: 'sloppy'.

Liverpool chased the league title for three decades without success. They only just won it back a few months ago. That's a big obstacle to overcome. At the same time, their has always been built on intensity – pressing, speed, duels; they perfected a lot of old-school English football themes which emphasise physicality and athleticism.

Mentally and physically, Liverpool have set a sensationally high standard for years. Having finally reached the Premier League summit, it would be understandable if they just slowed down a touch. That would certainly help to explain issues like lax build-up, individual errors, lack of pressure, a sluggish offside trap and a failure to track runs from midfield.

If this is the case, the international break may have come at the right time. Players may be able to go away, train in a slightly less competitive environment, mentally unwind a bit, and come back refreshed. In the meantime, Klopp can analyse the errors and work on a short-term fix if necessary.

No matter what happens, Liverpool cannot afford to continue defending as they have been. If they take the Aston Villa game as the warning sign that it is and work on reducing errors, they have the firepower to beat anyone in the league. Otherwise, upcoming opponents like Everton – and specifically James Rodriguez – will be licking their lips at the prospect of facing them.