Daniel James urges Man Utd calm: It's all about Chelsea

In my experience, reality often doesn't meet the hype.

If you read my story on Saturday, you would know Sarah from the George & Dragon pub built high expectations for the MLS Cup in Seattle the following day.

I'm pleased to say she did not disappoint.

As I had learnt first-hand at the George & Dragon, the locals don't mind an early wake-up call. Or a morning beer. It was the same on Sunday when I was told to join the 50m long line trying to get into Fado's Irish Pub. It was 8:20am.

It turned out to be a blessing as I arrived at the Merchant shortly after to find both Toronto and Seattle fans drinking, barely interested in the Liverpool vs Manchester City contest on telly. They were more focused on trading harmless barbs and chanting their songs, the visitors far more vocal despite their weariness from the long trip out west.

It didn't come cheap for the Toronto contingent either. One fan told me people were paying up to $1300 for flights. He got away cheaply, $800. Others had just arrived in the morning on no sleep after the 5+ hour flight from the east.

It was the last time I saw any red shirts until the match started. The pre-match entertainment at Occidental Square, featuring part-owner and Grammy winner Macklemore, was a sight to behold. It took me 20 minutes to cross from one side of the square to the other. 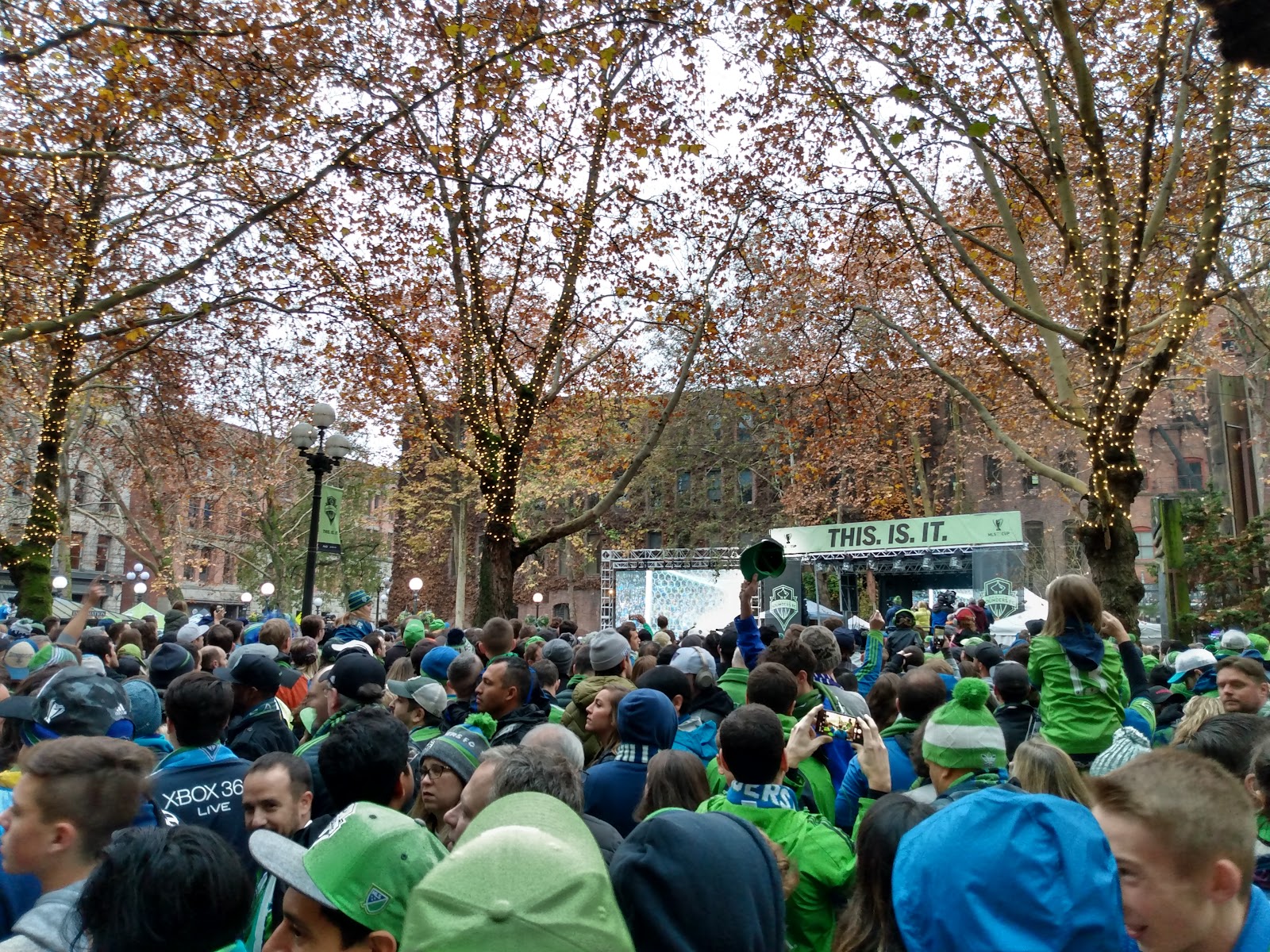 Then came the march to Century Link Field, a ritual for the Green Rave, but none more special than this one, the march towards their first MLS Cup on the banks of Puget Sound.

The Emerald City Supporters, an independent fan group of the Sounders, lead the way, equipped with banners, flares and enthusiastic leaders who I'm certain have cheerleading experience. Joining was Sounders general manager, Gareth Lagerway and other senior members of the club. Young kids held their parents hands, some of whom wore Sounders clothes from the old NASL days, grandmothers held up banners and signs. Supporters inside the stadium peeked out in large numbers to witness the approaching wave of blue, green and cascade shale.

It was good, wholesome football revelry, without the threat of violence and drunken tomfoolery, which fortunately continued inside the stadium, bouncing with close to 70,000 people who were all involved in creating an atmosphere up there with the best I've experienced at a football match. Right up there with World Cup quarter-finals, semi-finals, Premier League matches. I distinctly remember paying 60 quid to watch Manchester City play Chelsea at the Etihad in 2018 and nearly falling asleep, and that was with Kevin De Bruyne and Eden Hazard running around below. 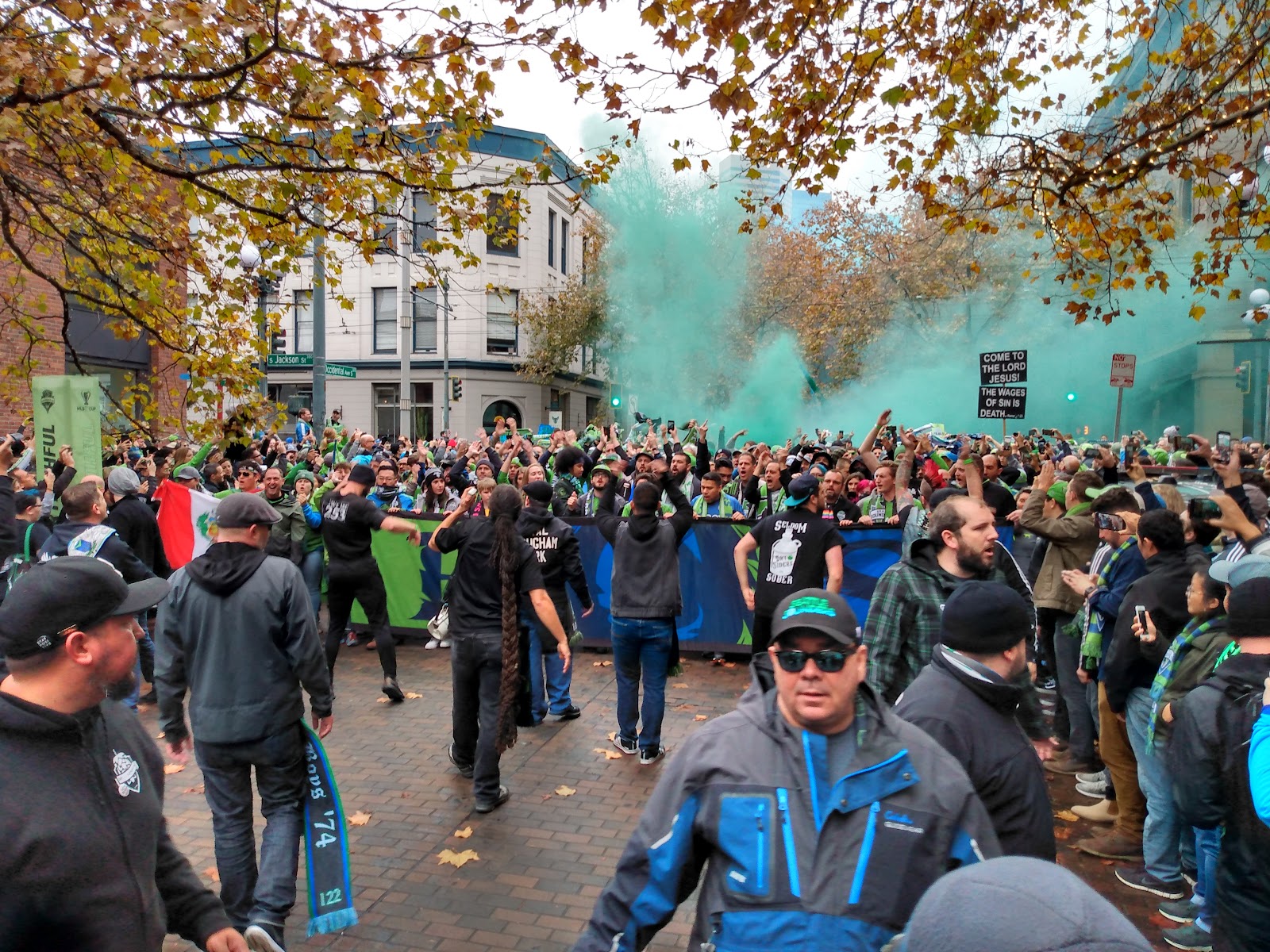 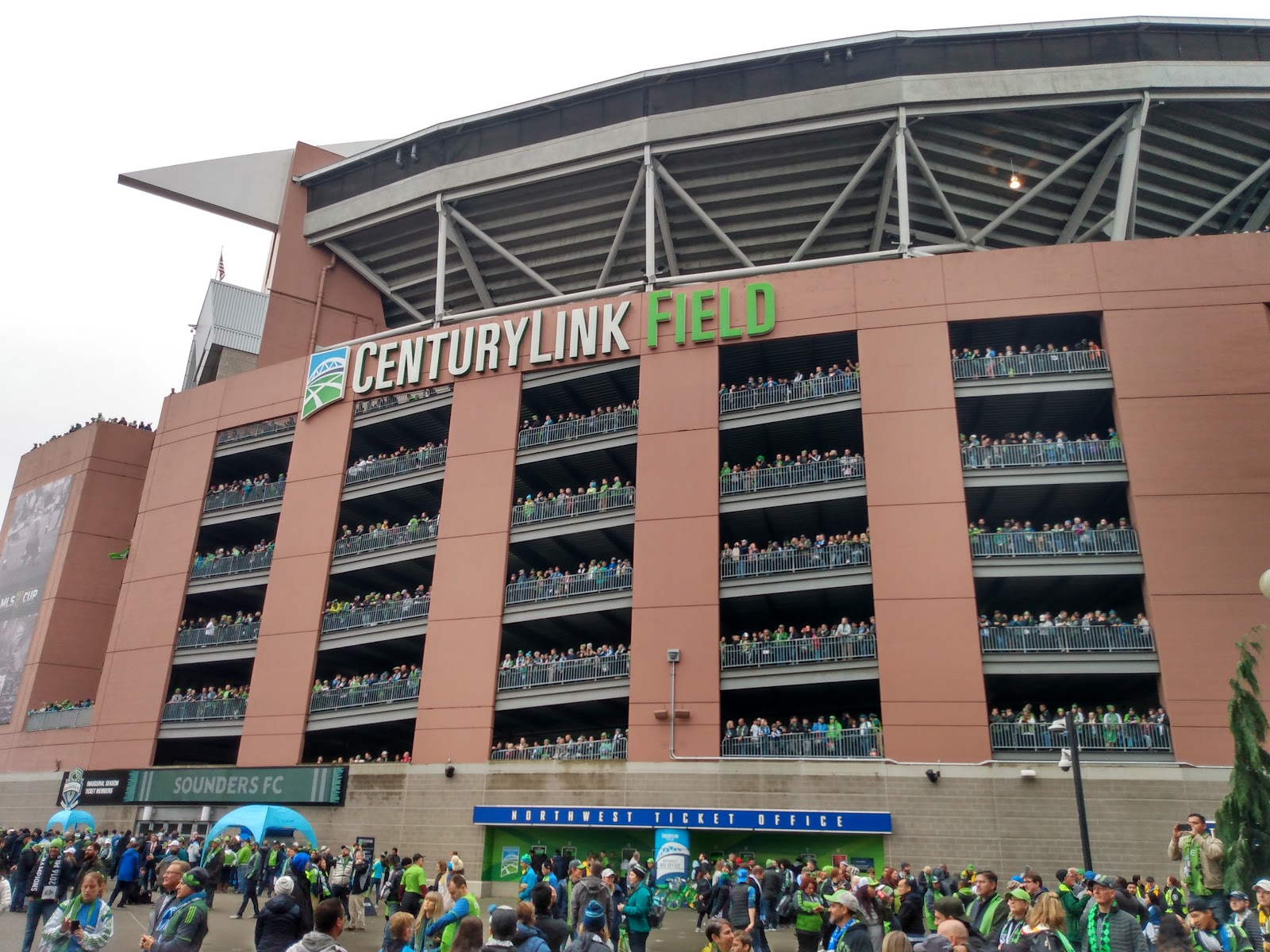 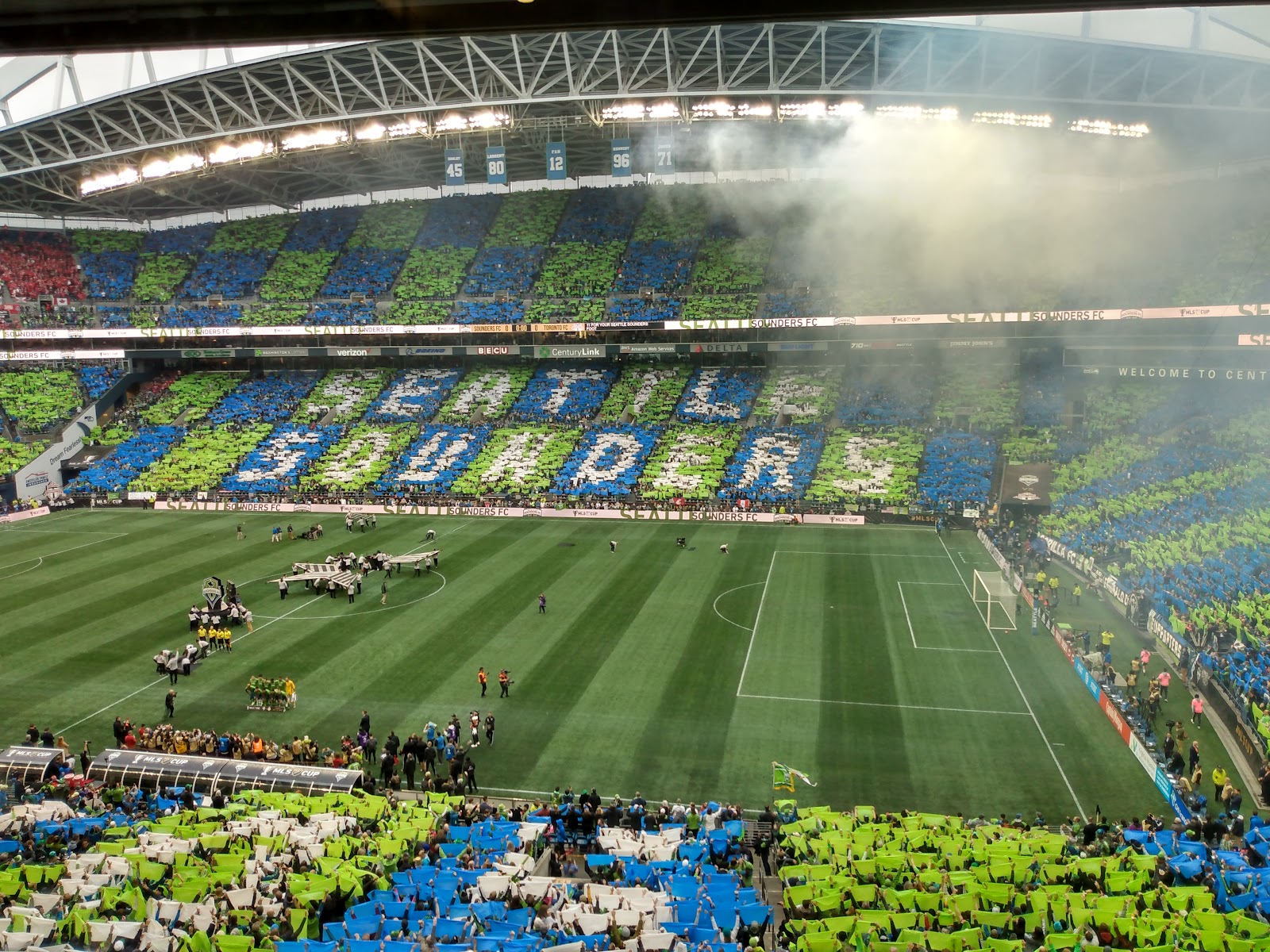 What the MLS might lack in the quality in comparison to Europe's top leagues, some clubs are certainly making up for with the other essentials needed for football to succeed: intense passion and a solid connection between the clubs and supporters. I've only been able to get a small sample in my time in the 'States, but this was certainly evident with LAFC and the Sounders.

The designated section for the Emerald City Supporters behind the goals at Century Link Field was essential to the atmosphere on Sunday. The Banc of California Stadium wouldn't have looked out of place in Buenos Aires or Dortmund during the Western Conference Finals.

I went to the A-League opener between Melbourne Victory vs Melbourne City last month and was shocked to find the Victory supporters, by far the best and biggest group in the league, tucked way up in the Level Three heavens. The lack of noise only served to magnify the drab contest on the pitch.

What the specific section provides is a starting point for the atmosphere, a spark of noise that can quickly spread across the whole stadium like wildfire. And when the game was all but won on Sunday, Century Link jumped in unison. There's nothing quite like being in a stadium filled with 70,000 people singing and dancing and cheering in glee, the feeling is indescribable. 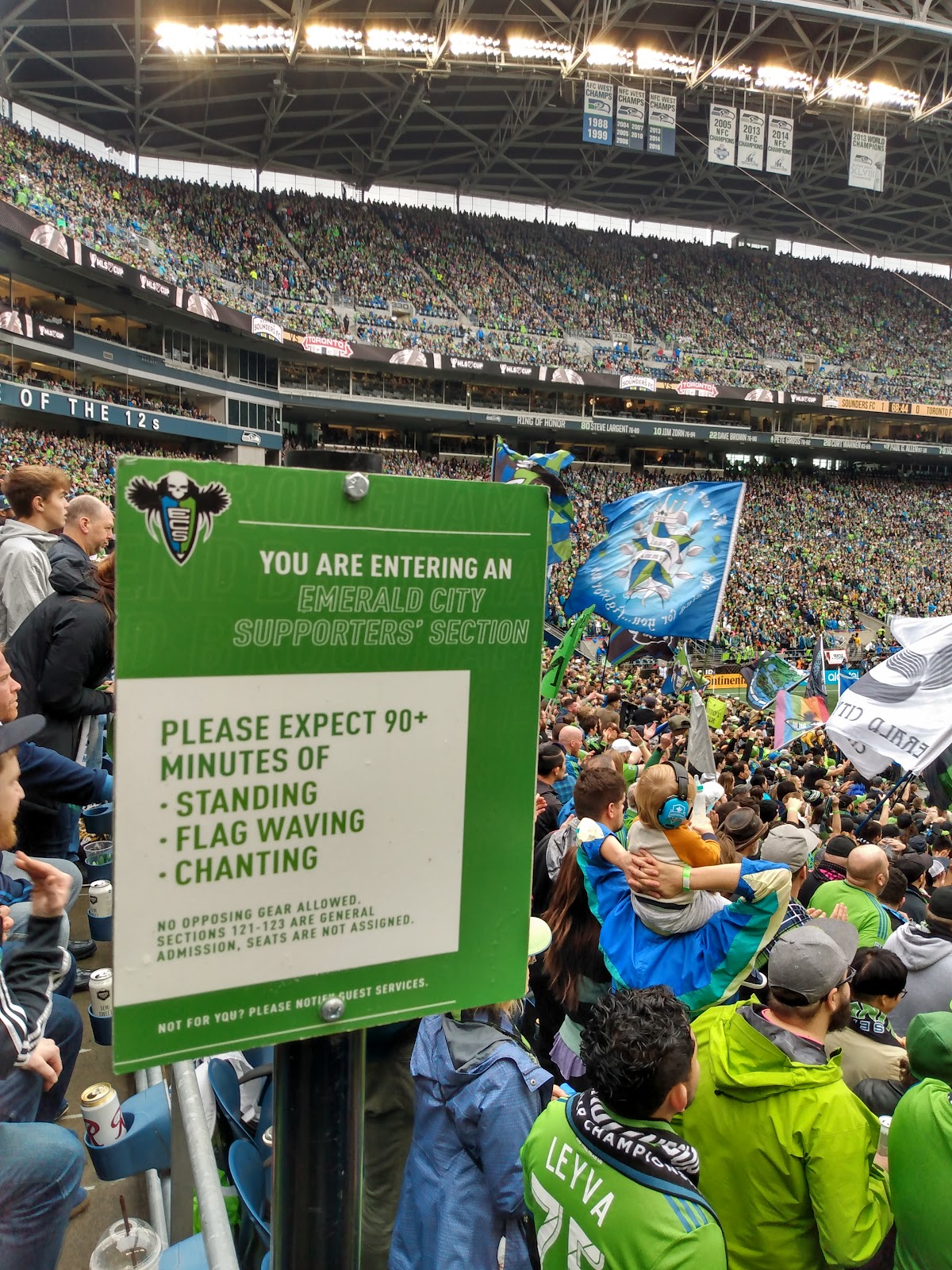 I was fortunate enough to be down with the Green Rave when Victor Rodriguez put the Sounders ahead by two goals. There was no doubt how much it meant to the supporters given the countless hugs shared and tears shed all around me. It was a final though, so of course it wasn't like this all the time. But my assumption was wrong, according to Chris, a ticket attendant who works in the section for the NFL and MLS, who assured me the atmosphere was lively for all regular season matches, except if it was freezing.

It wasn't the first time I was wrong on Sunday, of course. Sarah was right all along. The MLS Cup hype was well and truly met. Maybe I'll just have to come back next year to see if it was all a fluke... 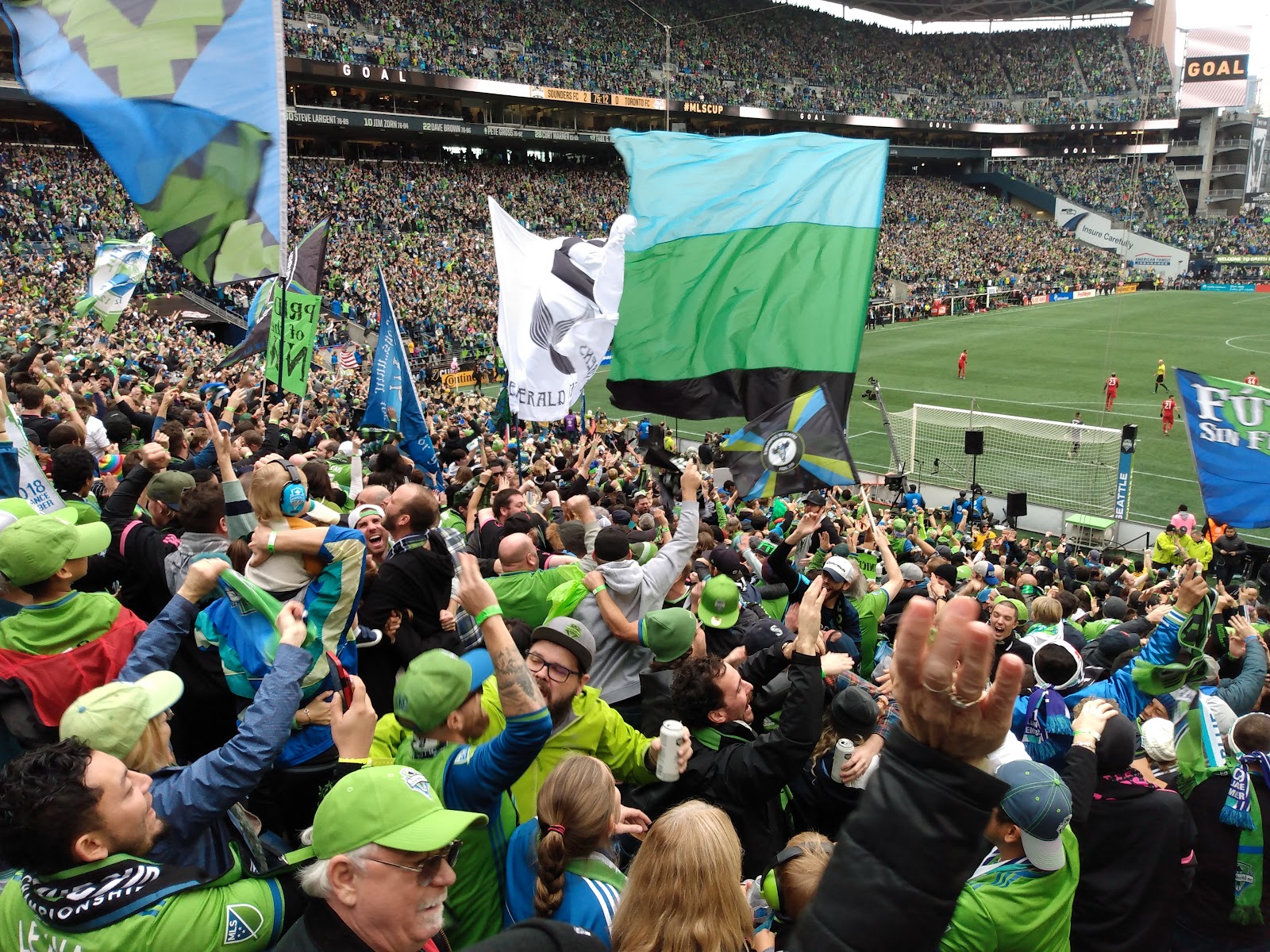