Manchester United opened its five game tour of the United States on July 19 with a 1-1 draw against Club America of Mexico in Glendale (suburban Phoenix) Arizona, in front of a crowd of 37,766.

Henry Martin, in his second year at Club America after transferring from Club Tijuana Xolos, opened the scoring in the 60th minute but Juan Mata (2010 World Cup winner with Spain) tied the match for United in the 78th minute.

Spain's Ander Herrera (starting his fifth season with the club) hit the post with a header and Mata pounced on the rebound, putting the ball just past Club America backup goalkeeper Oscar Jimenez (in his third season with CA after time with Chiapas and former Juarez franchise Indios), who had entered the game for starting keeper Agustin Marchesin (former Argentinian international who is also in his third season with America) just six minutes before.

Club America had the advantage of shots during the match (15 to 10) as well as shots on target 4-3. Manchester United had one more corner kick than the Mexico City side (4-3). 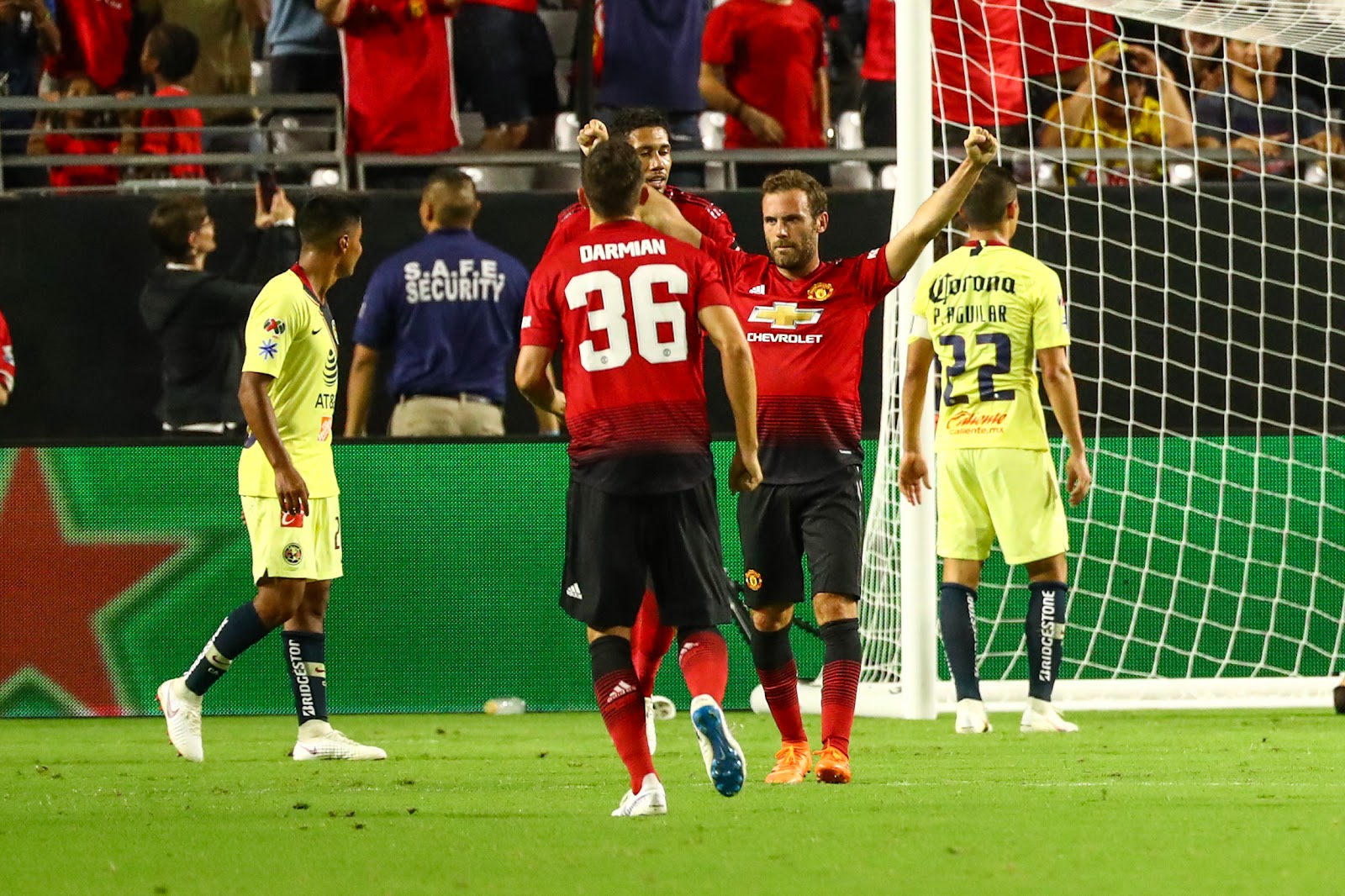 Club America, owned by Mexican Television Network Televisa, celebrated its Centennial in 2016 and has won 12 Mexican League Championships and 7 CONCACAF Club Championships; the latter is the most of any side in its history. Though it was a pre-season friendly for both sides, Club America was coming to the end of their preseason training as their league season began on the road on July 22 at Necaxa (in Aguascalientes), while Manchester United was just starting theirs' with this game after a short training stint in England.

United manager Jose Mourihno said after the match: "I think it was a good training session for us and also probably for them. Both teams fought for a result; it was a friendly, the result is not the most important thing, but players fought for a result which made the game quite nice. In the first half we were the best team; we had the best chances. In the second half, they were stronger than us in the beginning and they scored; with the only striker we had here (Mata), we had to go for it and it was okay." 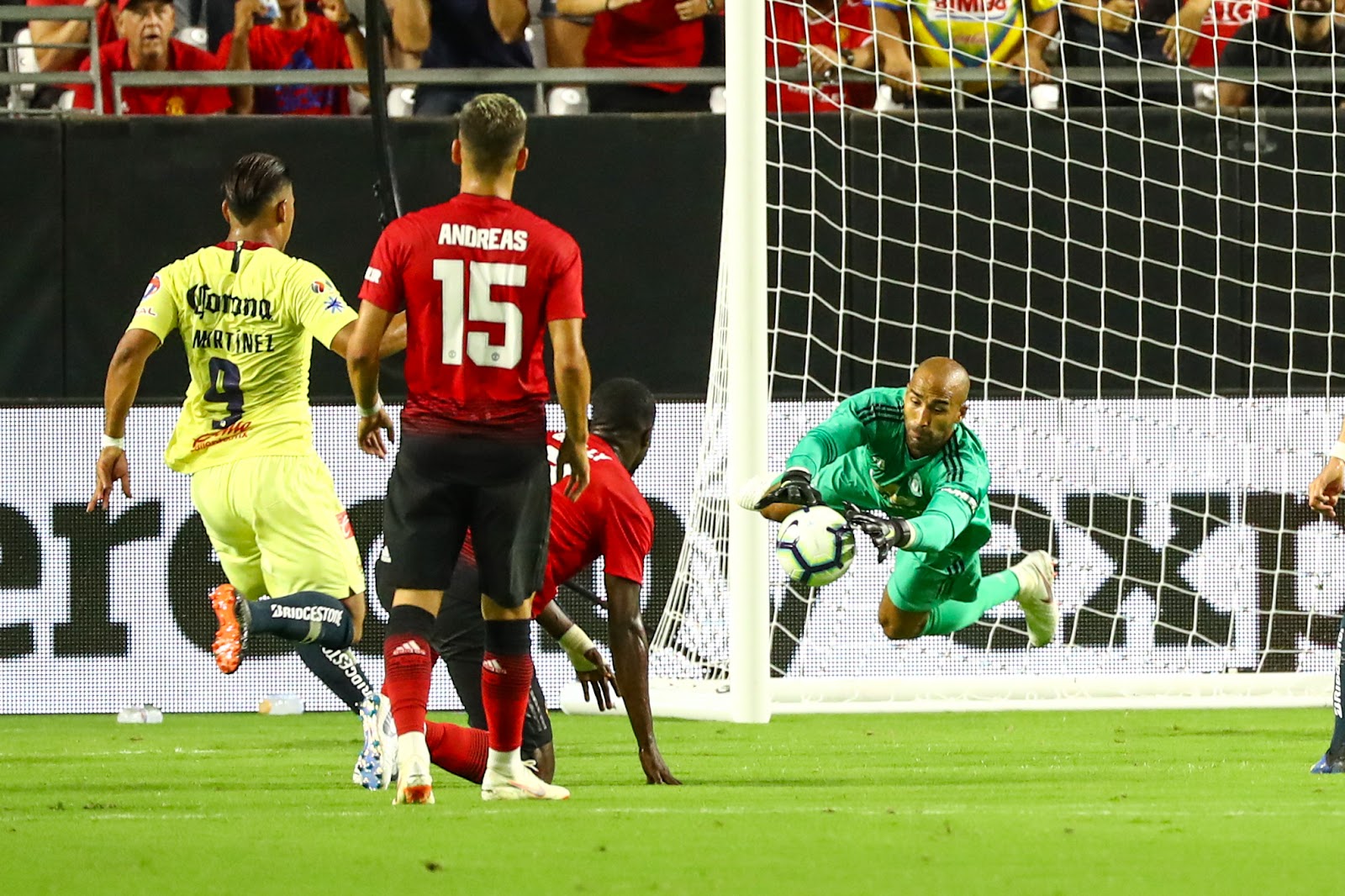 Manchester United goalkeeper Lee Grant makes a first half save from Club America's Roger Martinez (Colombia) in the first half of their 1-1 friendly match in Glendale, Arizona on July 19, 2018 (Photo courtesy of Arianna Grainey Photography).

United's Tahith Chong entered the game in the 61st minute for Anthony Martial—who just missed out on French national team manager Didier Deschamps' final 23 for the 2018 World Cup—and was quite dangerous, primarily on the right side, helping the English side tie the game. Chong (18) was born on the island of Curacao and joined Feyenoord's academy in the Netherlands at age 10; he has been capped by the Dutch U-19 national side. He joined Manchester United in 2016 and was promoted to the first team squad this summer.

When asked about where Chong fits into his squad's plans for the season, Mourinho said: "I have plans to train him the most possible times with us [on this tour] because it increases his evolution. He has to play where he belongs, in the academy, and develop physically because physically he is not ready [for EPL play]. Technically he is very good, tactically he understands the game and his position, but by the physical point of view, when the game gets into contact situations he's in trouble, he's fragile, he's still a kid.

"The talent is there, the personality, the passion, the desire to play, the humility to learn, so this is a fantastic experience for him, if he can play like today, 20-25 minutes in each of the 5 matches [in the States] and during the season he trains with us and [has] a couple of occasions to play minutes with us; I don't know it depends, maybe some cup matches. He's one of the good kids that we have, he's not for today but for tomorrow; he is a good kid." 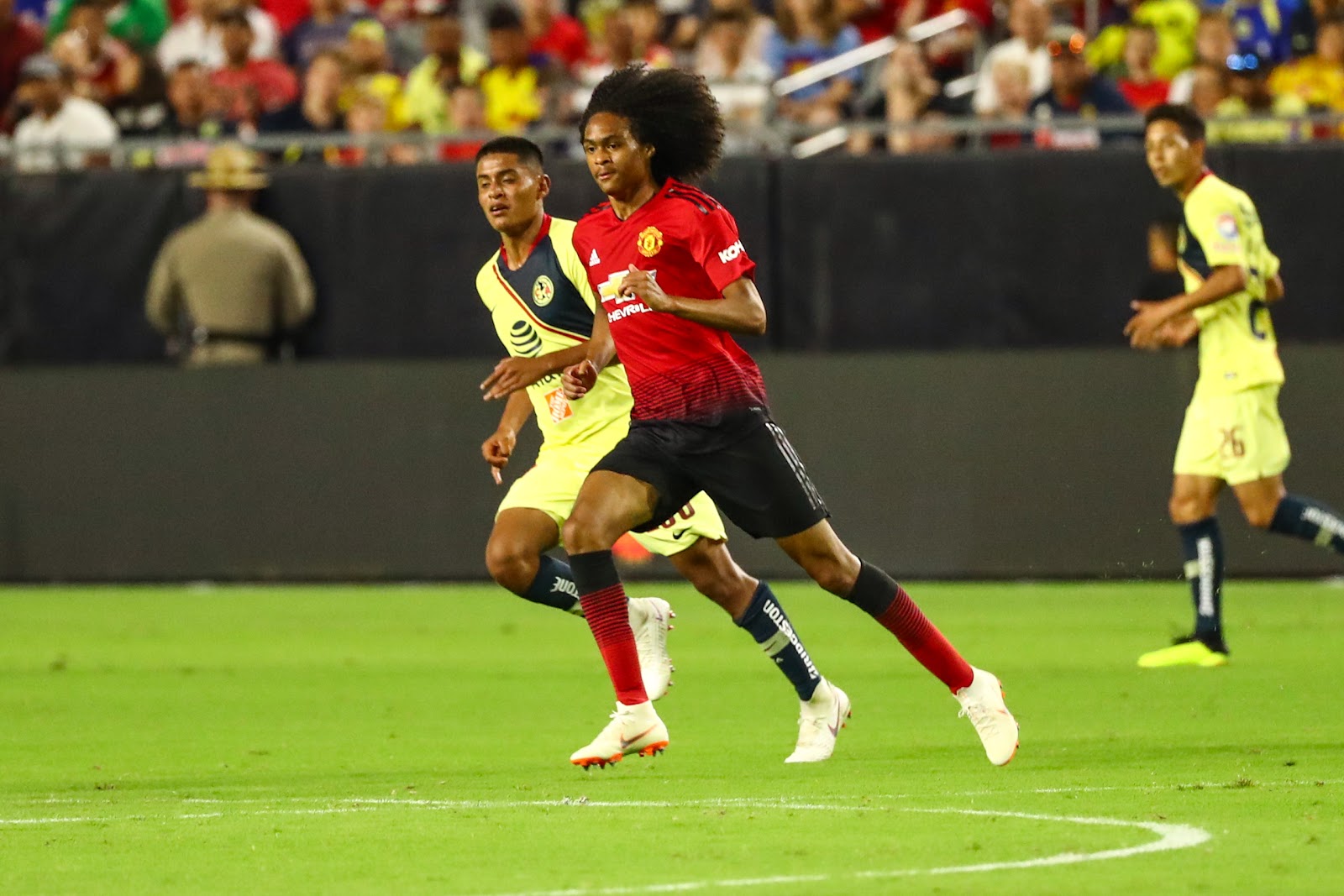 Mourinho said that Spain's Alexis Sanchez, who did not accompany the team from England to Phoenix because of U.S. visa issues, would play as soon as he arrived, because his side was so short of strikers, who were taking a break after the World Cup, including champion Paul Pogba of France, Romelu Lukaku of Belgium, and Jesse Lingard and Marcus Rashford of England.

Manchester United was next due to play the San Jose Earthquakes of MLS on July 22, followed by matches against AC Milan in Los Angeles on July 25, Liverpool in Ann Arbor Michigan on July 28 and Real Madrid in Miami on July 31. 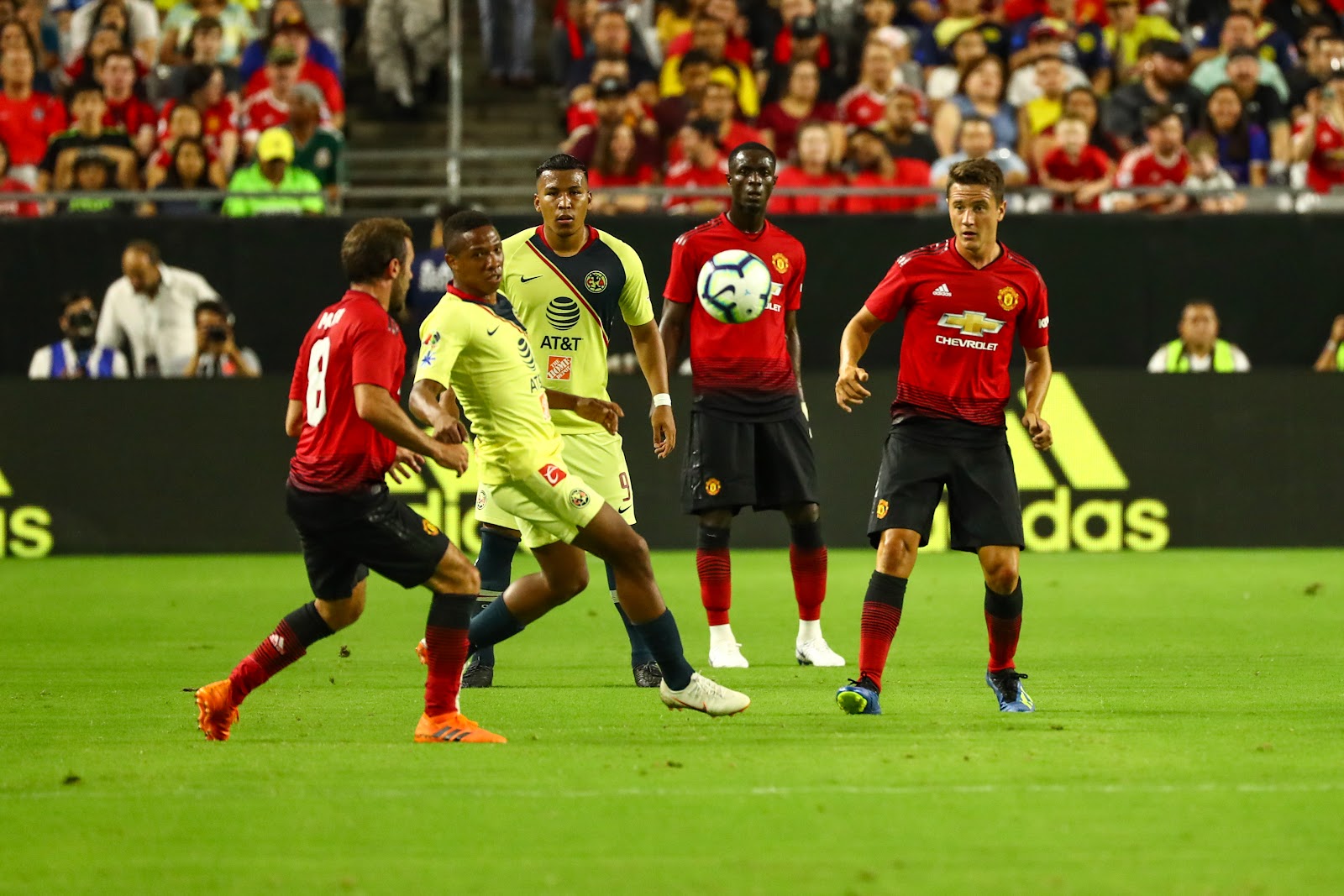 Eye on the Ball—Manchester United and Club America players follow the ball in Glendale, Arizona on July 19, 2018 (Photo courtesy of Arianna Grainey Photography).

Tim Grainey is a contributor to Tribal Football. His latest book Beyond Bend it Like Beckham on the global game of women's football. Get your copy today.