Kane & Jose: How together they can convince Spurs to spend big this summer

On paper, the argument is an easy one to make. Harry Kane is a Champions League player. A title winning player. He should be producing matchwinning performances at the Santiago Bernabeu and Allianz Arena - or at least be given that opportunity.

For his ability; for his record; Kane's reputation and profile deserves to be on a level of Neymar, Kylian Mbappe... even Leo Messi and Cristiano Ronaldo. No fair minded fan can reason that Kane's best days deserve to played out in the Eastern European haunts of the Europa League or scrapping for an away point in the hope of a fifth place finish in the Prem.

Two years ago. Even last summer. Kane could reason there was still time for Tottenham to get it together. But he turns 28 in July. A year on he'll be 29. If the move is going to be made, it will have to be this summer.

In past columns, we've argued Kane should stay put. The potential of this Spurs team - and this club - is enormous. But that potential is threatening not to be realised. And with time now catching up, Kane really is facing a watershed moment in his career.

But it isn't just the England captain who faces a looming juncture. Daniel Levy, the chairman, and the club's prime backer, Joe Lewis, are also facing a crunch summer. And how they react to the offseason market is sure to influence the thinking of their most prized asset.

In the club's favour, as much as some outside insist otherwise, is the presence of the manager. If Kane does decide to press on with Spurs next season, his relationship with Jose Mourinho will have gone a long way from dissuading him to seeking a move away. It's now common knowledge that Kane is 'all in' with Jose, the striker his most loyal - and vocal - ally in the dressing room. Indeed, for some around Spurs Lodge, no-one believes more in Mourinho's methods inside the club and boardroom than their No10. 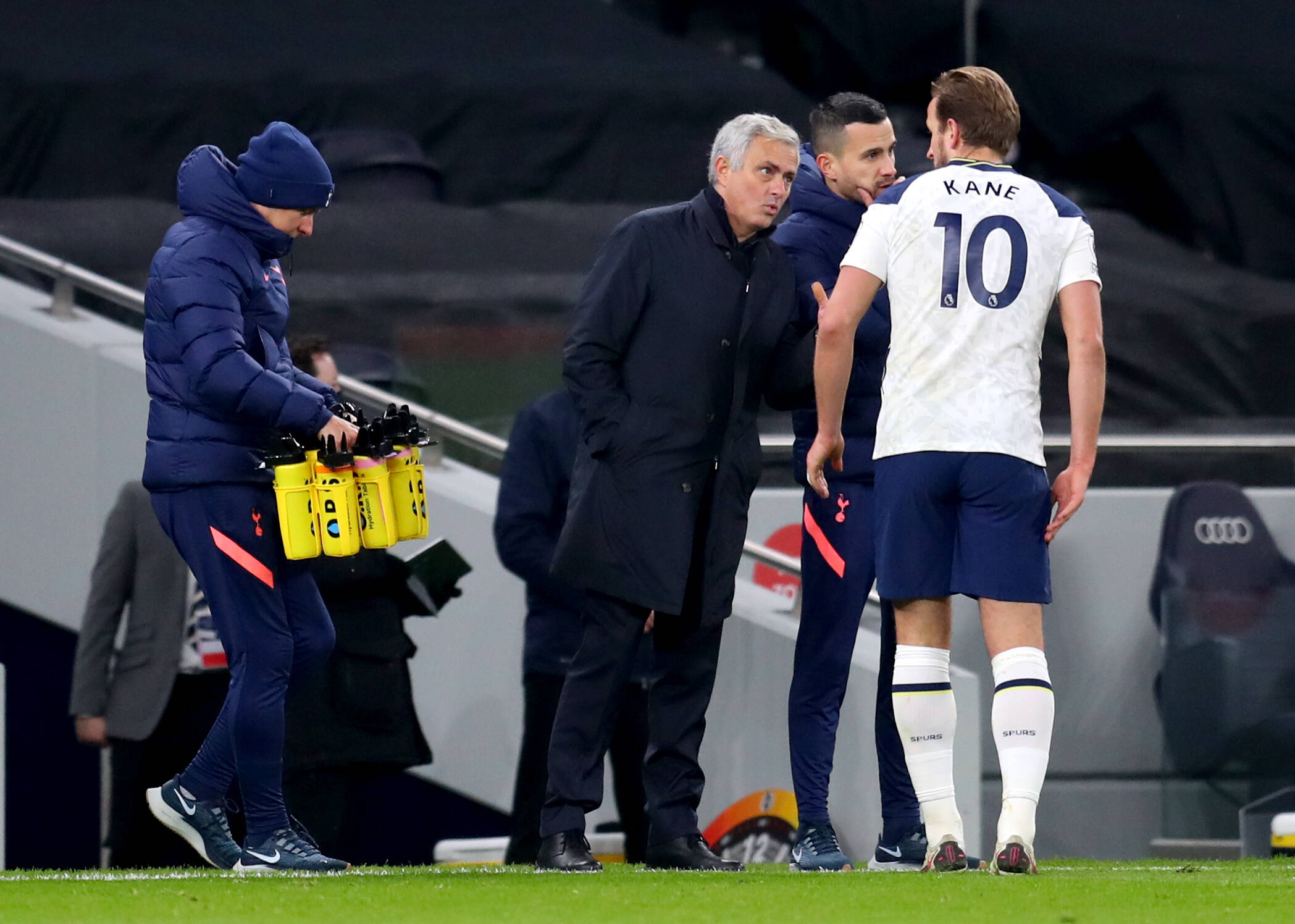 Mourinho and Kane close as ever

And that's a bonus. Especially for Levy and Lewis. It buys them time. Time to get things right in the market. Spurs bought well in Mourinho's first summer transfer window as manager. Left-back was solved with Sergio Reguilon. The midfield was strengthened with Pierre-Emile Hojbjerg. But there remains gaps in this team. If Mourinho is to fulfil his brief and satisfy the ambitions of Kane and the demands of the board, then the spending of last year must be increased.

The PR can roll out what it wants, but Mourinho wasn't hired by Levy to build and develop a team. He's not at Spurs to bring through academy talent. To look to the long-term. He's there to win. Mourinho's brief was effectively to break the cycle of courageous defeats and near misses. But the only way he can satisfy that demand is if Lewis dips into his pocket and goes the extra mile this summer. Mourinho needs readymade players - and significantly, so does Levy if he wants Kane to stick around.

For as much as he's a supporter of his manager inside the dressing room, Kane's crossroads moment also works for Mourinho when it comes to the board room. If he is to get the players he wants. If he is to convince Levy and Lewis to shell out more than usual. Then there can be no greater argument than what it would do for Kane's plans to suddenly see seasoned, ready-to-roll matchwinners walking through the gates at Spurs Lodge this summer.

As much as it is easy to explain why Kane should quit his formative club. It can be just as easy to argue why he should stay if Levy delivers on Mourinho's 'A' list of transfer targets ahead of next season. Just think Gareth Bale, without the need for the months of rehab and recovery...

Indeed, just as an aside, Mourinho didn't deserve that this week. For all the barbs he's taken. For all the shots fired in his direction. All aimed at how he's managed Bale through this season. Building up his self-belief. Working through his fitness issues. The constant doubts around how Mourinho and his staff were handling the attacker. Then, just as we're seeing him back to his best, Bale - away from London and away from Spurs - declares all that work will see him return to parent club Real Madrid in June.

"Going into the Euros I wanted to get match fitness," said the Wales captain. "The original plan was to do a season at Spurs. My plan is to go back."

Mourinho didn't deserve that. Nor his staff. Nor Spurs. Bale should've kept those thoughts behind closed doors. Confirming that this is just a fleeting thing does no-one any favours.

The manager and his backroom team deserve great credit for reviving Bale's form. But, if Bale sticks to what he claimed this week, Spurs won't see the long-term benefits.

It's just another hole that now needs to be plugged. Another doubt raised in Kane's mind about how this Spurs team will look come the start of next season. And the only way to ease those concerns is by a show of ambition from the board.

For Kane. For Spurs. This summer is looming as a watershed moment. If ever there was one, both Kane and those handling the purse strings are facing a crossroads.