Jota vs Firmino: Why Klopp won't change his Liverpool attack just yet

Liverpool looked back to their rampant best in their 5-0 win over Atalanta in Champions League action on Tuesday night. Diogo Jota played a key role in the victory, scoring a hat-trick and earning plaudits for his all-round performance. As a consequence, there is debate over whether he should start ahead of Roberto Firmino at the centre of Jurgen Klopp's front three.

There are reasons behind the discussion that have nothing to do with performance. Football fans, like people in general, can be excited by new developments, and Jota is both younger and newer to the Liverpool team than Firmino. However, there are also genuine reasons to argue in favour of Jota starting. That's what we at Tribal Football will dig into in this article.

Losing his man: Why Jota performed so well against Atalanta

There are a few specific attributes a player needs if he is going to lead Liverpool's frontline. He needs to be hard-working and intelligent, particularly when it comes to pressing, and Jota demonstrated this throughout the clash with Atalanta. He also showcased exceptional movement, which was particularly helpful considering the opposition.

Atalanta are one of the most resolute man-marking sides playing top-level European football today. They always play a back three, with the extra defender allowing them to be more aggressive in following opposition forwards man-to-man. Against this type of defensive system, Jota's off-ball attacking qualities came to the fore.

Below we see Jota's ability to lose his man. Andrew Robertson has the ball and is looking for an option. Jota initially moves to the left as if to run in behind. 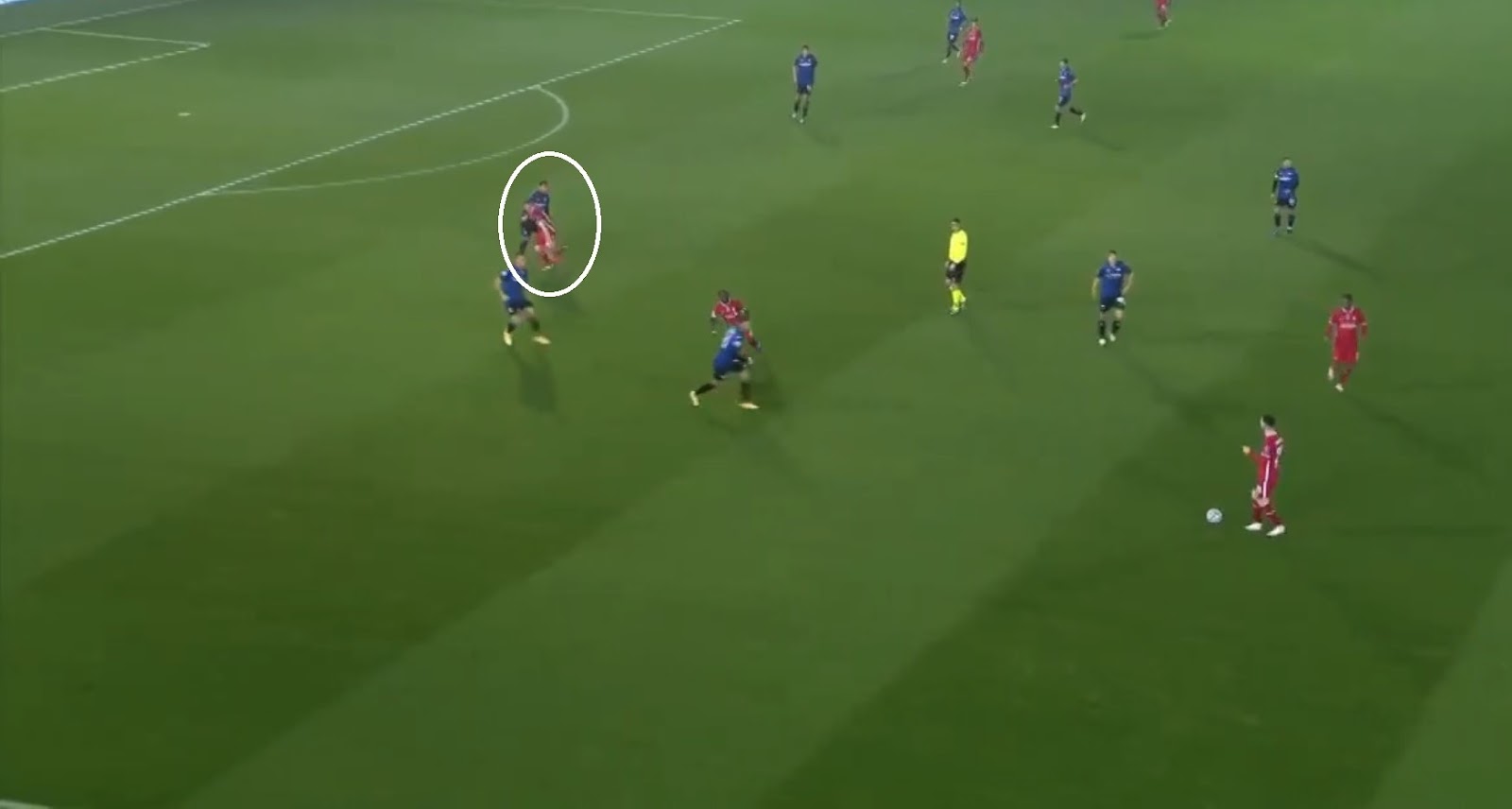 But then he suddenly turns and moves the other way. His man-marker is unable to keep up with this quick change of direction, and Jota works a bit of space for himself. Now he can receive the ball without a defender breathing down his neck. There's less threat of being intercepted, outmuscled or tackled, and Robertson passes to him. 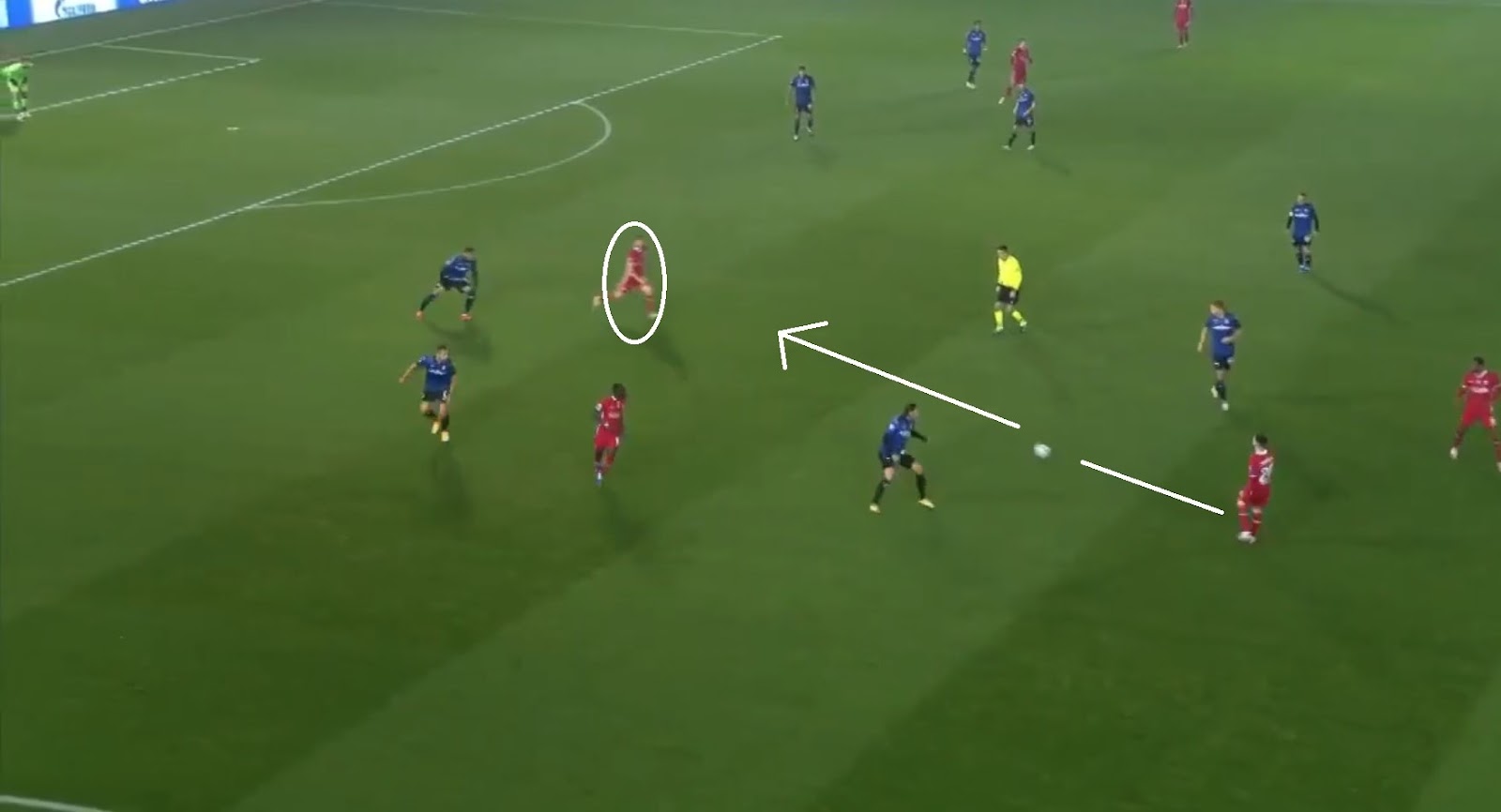 Later in the game we saw Jota's awareness of the movement going on around him. Temporarily he switched positions with Mohamed Salah, moving to the right of Liverpool's front three. Salah went short as if to receive the ball to feet, dragging his man-marker with him. Recognising this movement, Jota made a run to try and exploit the space it was opening up in Atalanta's back line.

This particular piece of movement didn't lead to anything, but it did show Jota's perception and underlined that he is on the same wavelength as his teammates. Noticeably Sadio Mane, on the left of the front three, made the exact same run.

Playing in the central role of Liverpool's front three also necessitates a willingness to drop into midfield at times to create overloads and link attacks. Below we see some examples of Jota doing just that.

Here, he shakes off his marker and drops into midfield, making himself available as a passing option for Jordan Henderson.

And below he performs the same movement, dropping into midfield, only this time he receives out from the back and plays a first-time lay-off for the supporting Henderson. 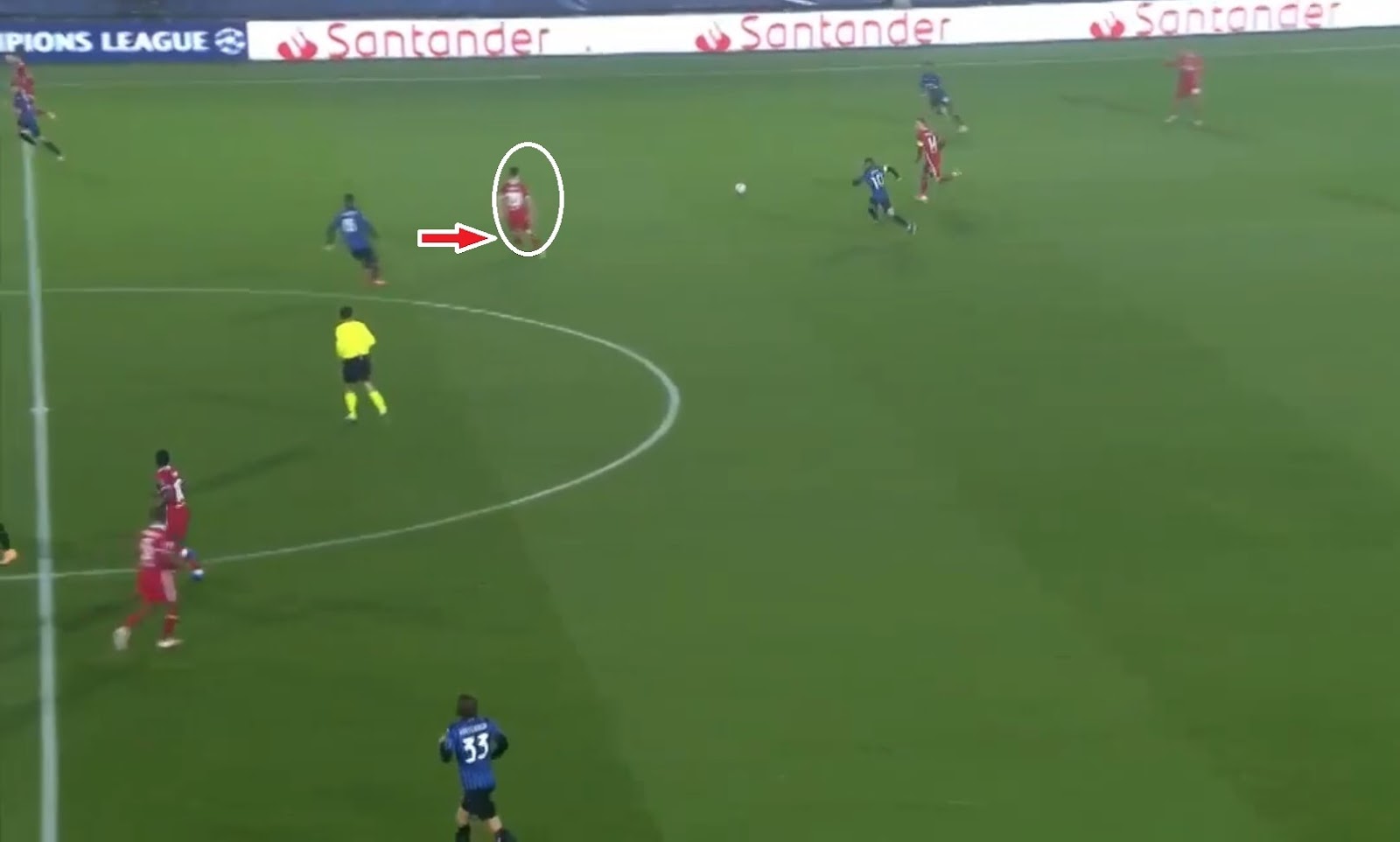 Jota also combined his good movement with a turn of pace to get in behind Atalanta's back line on numerous occasions. Two of these runs led to goals. Below we see his run in the lead-up to his first goal.

Here he sees the space in the opponent's back line and runs into it, pointing to direct his teammate to play him in. His speed allows him to latch onto the pass, get between the ball and his marker, and he was in on goal to finish. 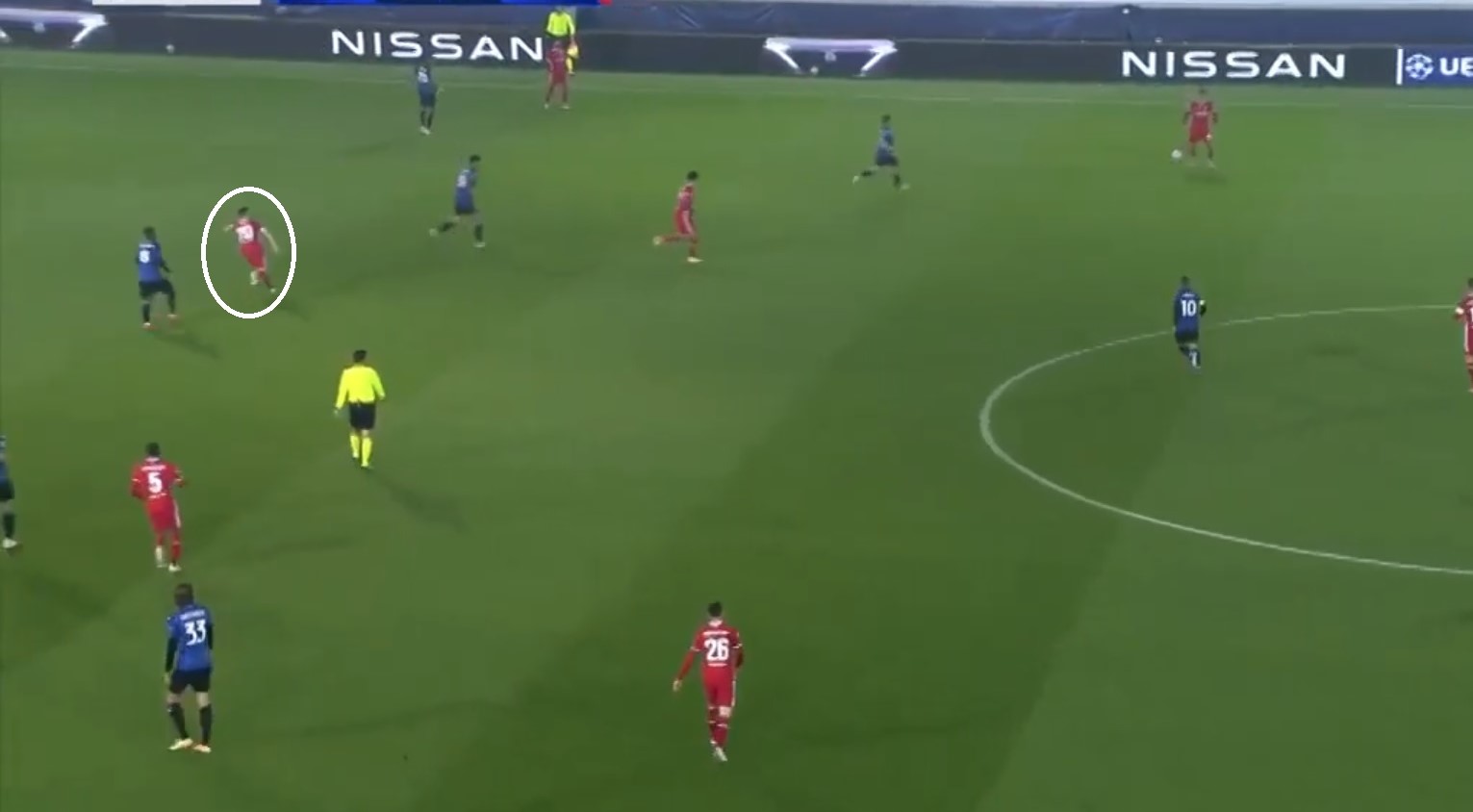 Jota's performance was perfect considering the opposition's defensive style. Atalanta's man-marking just didn't work on someone with such clever movement and speed. It was an inspired selection from Klopp, who afterwards confirmed his reasoning for picking the Portuguese international in this particular game.

"It was clear it made sense for tonight, first of all, to use the good shape Diogo is in," Klopp said per the BBC. "And because of the way Atalanta play and defend, it made sense that the skillset of Diogo helps."

Jota versus Firmino, and what it means for Liverpool's attack

Now that he has absolutely shown his class on European club football's biggest stage, Jota looks ready to play an important part for Liverpool this season. The question is: should he play at the expense of Firmino?

While he took Firmino's position against Atalanta, Jota brings different qualities to the role. Both are comfortable dropping into midfield, though Firmino is much better at linking play, especially with his back to goal and when feeling physical contact from a defender. He also has more flair in these situations, sometimes using tricks and flicks as opposed to just keeping it simple or playing the lay-off.

But while Jota isn't as effective dropping into midfield and connecting moves, he is better at finding separation. If marked, his ability to change pace and direction instantaneously allows him to lose his man and turn himself into a more viable passing option for teammates. He's also a more versatile runner who offers a threat in behind thanks to his gifts both athletic (speed, acceleration) and mental (identifying space, timing the run).

Jota is a more dynamic striker than Firmino. This could prove particularly important against aggressive opponents who play high defensive lines and leave space to be attacked (not to mention anyone brave enough to copy Atalanta and go man-for-man with *that* front three). Whereas Firmino constantly looks for pockets in midfield, Jota can mix it up by offering for the ball into space as well as the ball to feet.

His threat in behind also means he should naturally hit scoring positions more consistently, where he has already shown a variety of finishes – his seven Liverpool goals so far include a header from a cross, a deft chip over a rushing goalkeeper, and a mix of controlled and smashed finishes with both feet.

Jota is an all-round more versatile player than Firmino. He offers more variation in his movement, he's more two-footed, and he can naturally fill more positions in the front three. If he rotates with Salah or Mane it doesn't really change the whole picture too much, potentially making Liverpool's attacking setup more fluid.

Despite all of this, Klopp was keen not to overdo his post-Atalanta reaction. "We would not even be in the Champions League if Firmino were not with us," he said. "On a good day he is not [possible] to defend [against]."

And the stats also suggest that, while impressive, Jota is not necessarily going to take Firmino's place just yet. According to WhoScored data, Jota is averaging more shots and has scored more goals in Premier League action this season, but Firmino is still well ahead in terms of passes, key passes and dribbles per game.

Jota made a statement with his performance against Atalanta, but he's a long way off usurping Firmino in Liverpool's starting line-up. In the meantime, his versatility gives Klopp the quality rotation piece up front that, until now, has otherwise been missing.