Jose's shadow: Why Man Utd & Ole so reluctant to talk up Dalot return?

Max Aarons... Kieran Trippier... a new right-back? why the interest? Why even the consideration? Particularly when other positions are in need of strengthening? And especially when Manchester United have a young lad doing everything expected of him at a title chasing AC Milan...

...could it be politics? Football politics? Could that be why contact was made with the minders of Atletico's England international right-back Trippier before Christmas? To be fair, that approach can be reasoned away. Trippier has several years on Aaron Wan-Bissaka. He's better at going forward and is a proven Champions League player. Trippier would arrive as a better option than what's available to manager Ole Gunnar Solskjaer.

But Aarons? The young fullback of Norwich City? A talent. A talent of great potential. Excellent going forward. Can do better defensively. But still a player that United's peers across Europe have been following for some years.

Problem is, you could say the same about Diogo Dalot. A player actually contracted to United. One now proving his value on-loan at Milan. But also one whose future, in terms of United, appears clouded.

On paper. Maybe even on the pitch. But in theory - at least - United shouldn't be concerning themselves about the likes of Trippier or Aarons. Wan-Bissaka has proven himself capable of being a long-term option at right-back. And potentially Dalot is now doing the same while away in Italy. Wan-Bissaka at 23. Dalot at 21. Two great talents. Two ten-year options. With spending money this summer... if not tight, then at least a little limited... why is Solskjaer considering the likes of Aarons to compete with Wan-Bissaka for a starting place, when Dalot has as much in his locker as the Canaries defender?

We mentioned politics - and you'd hate it to be so. But given the resentment of so many on the staff at United towards Jose Mourinho, could it be that Dalot's status as a 'personal bet' by his old manager be reason why there appears a willingness to squeeze him out of the club?

If there's one signing Mourinho staked his reputation on at United, it was his fellow Portuguese. Dalot's arrival from Porto was clinched by the presence of Mourinho. He had personally scouted the prospect. He'd sounded out his most trusted confidants inside Portuguese football for their opinion on the youngster. Dalot was his signing - and his signing alone. And he wasn't shy in making a show of it. 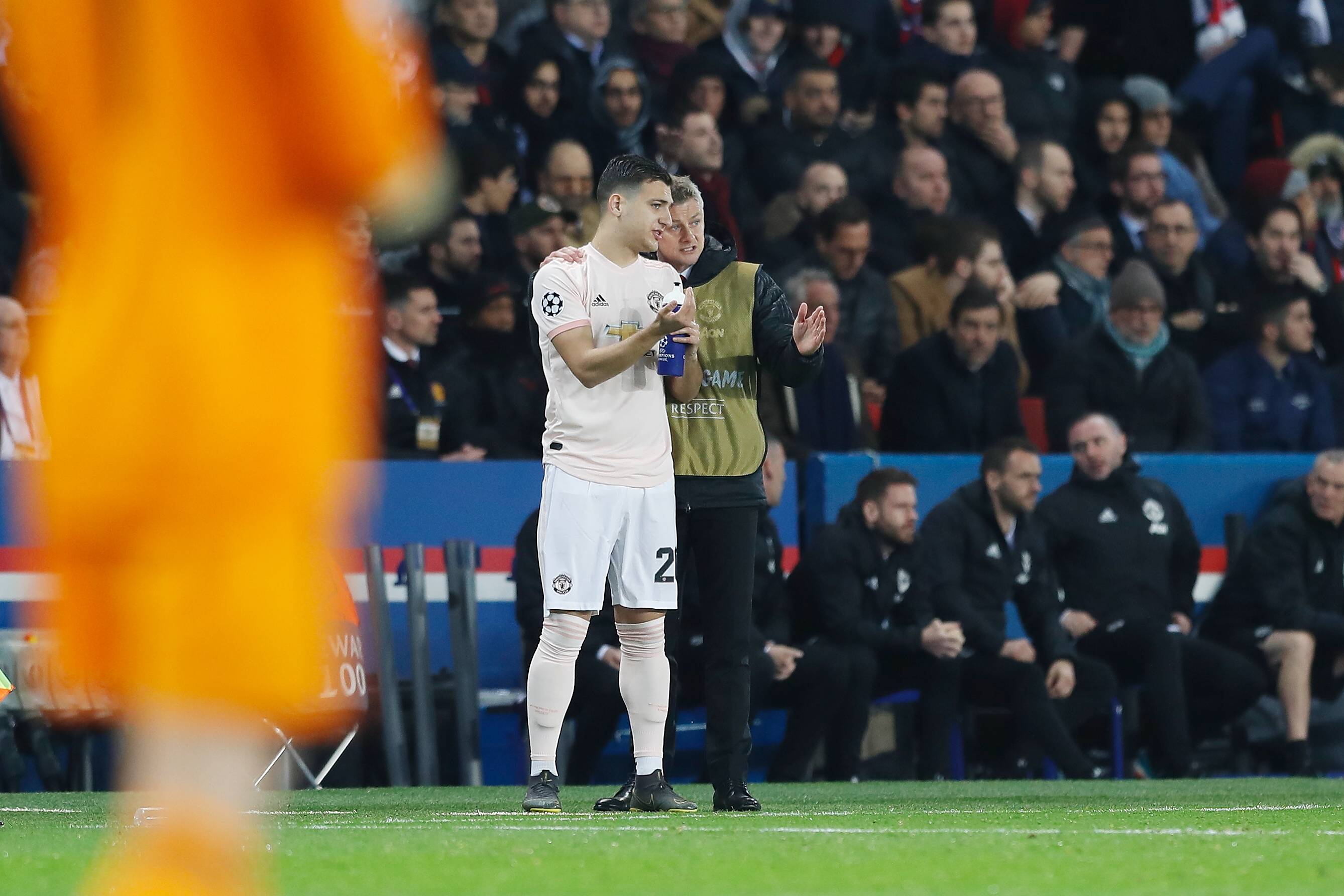 Dalot and Solskjaer together in 2019

"I'm not a scout, I have no chance to do that," declared Mourinho at the beginning of the 2018/19 season. "I can do it with Dalot because he is Portuguese. I can control that market pretty well. He's a player with fantastic potential."

Basically, for as long as Dalot is a Manchester United player, Mourinho has made sure - though not consciously - that the pair are forever tied. A situation that still has Dalot bursting with pride.

Speaking after Thursday's Europa League performance at Old Trafford, Dalot said: “I am grateful (to Mourinho) for everything. When I can I talk to him. I like Mourinho, he is a great person and a great coach, I am grateful for everything he has done for me."

Unfortunately when it comes to the Tottenham manager, the feeling within Carrington isn't the same. And while nothing can be confirmed, that connection with Mourinho does the fullback no favours.

There's deficiencies to Dalot. And his progress has been hampered by injury. But there's no doubting Dalot's talent and potential - which is now being realised in Milan's Rossonero colours. Indeed, if there's one club where those weaknesses in Dalot's game - his defensive positioning, his awareness - can be ironed out, he could've done a lot worse than choosing Serie A and Milan as a finishing school.

On the face of it, it's a great move for all concerned. A straight loan. Milan get a player to deepen a squad competing for the Scudetto and in Europe. United are able to see their player develop in another testing environment. And Dalot gets the chance of regular football at an elite level. In a perfect world, Dalot returns a defensively better fullback; is handed a clean slate; and goes head-to-head with Wan-Bissaka for place in Solskjaer's starting XI.

But for now, that doesn't seem the case. But it can't be talent. It can't be potential. Even against United on Thursday, Dalot impressed. Out-of-position at left-back, he was as good as anyone on the pitch. The idea United are going to throw that all away and start again makes little sense.

Another of Mourinho's signings, Nemanja Matic, agrees with such sentiment: "I have seen a couple of games of Dalot with Milan, he plays well every time he takes the field. I think it was a great transfer for him.

"Playing for Milan is like playing for Manchester United, you have a lot of pressure, there are a lot of fans who follow you. I hope he continues to do well and that one day he can come back to play here."

Significantly, Matic found himself in a similar position to Dalot last season. And it reached the point where he and Solskjaer had a genuine 'clearing of the air'. Man-to-man, it was a very sober conversation. But in the end, differences - perceptions - were shattered and it was perhaps one of the big turning points in Solskjaer's career that he began counting on the Serb.

Perhaps it's perception that Dalot needs to overcome? It can't be talent. Stefano Pioli and Paolo Maldini will tell Solskjaer that. Trippier? Aarons? Why are United even contemplating such a move when they have Jose's "10-year right-back" still on the books?