Ismaila Sarr has been one of the most exciting players of this Premier League season so far. After five games, he has scored three goals and played a pivotal role in both of newly-promoted Watford's two wins. His opening performance, in a 3-2 win over Aston Villa, led to Matt Targett, Villa's left-back and his direct opponent on the day, being substituted at half-time.

At 23 years old, Sarr is now in his third year with Watford and his second campaign of top-flight football in England. With consistent performances filled with skill, pace and end product, he is proving himself to be one of the most talented young wingers in the league. Here, we at Tribal Football will analyse what makes him so effective and what his ceiling might be.

Sarr was born in Senegal and began his career with Generation Foot, a club based in Dakar where Liverpool's Sadio Mane -- along with a number of other future Premier League footballers like Papiss Cisse and Diafra Sakho -- also started out. At the age of 18 he moved to Metz in the French top flight. He spent one season there before joining Rennes for a transfer fee of around £15 million.

The winger was also linked with Barcelona at the time, but told reporters he turned down a move to the Catalan giants, showing a maturity that belied his age. "Leaving Metz to join them was too early," he said. "I still have to progress defensively, offensively with more flair, and be more decisive in my approach towards goal."

In two seasons with Rennes, Sarr scored 13 league goals, earning a £30 million move to Watford. He enjoyed a promising debut campaign with the Hornets before developing into a key player in their promotion charge last term, averaging a goal every three games. Now, playing on the right wing of manager Xisco's 4-3-3 system, the 23-year-old is tormenting Premier League left-backs.

Sarr excels in the 1-versus-1 situations he consistently finds himself in on the right-hand side. Watford are not a possession-dominant team, so they aren't afraid to find him directly and there are also plenty of counter-attacking opportunities where Sarr can get isolated. While it's early days in the season, it's fair to say that opponents haven't figured him out yet. In the Premier League only Adama Traore and Allan Saint-Maximin average more dribbles than his 3.2 per game, and only Wilfried Zaha is fouled more often.

There are trickier wingers in the league, few are as quick as Sarr. He has incredible acceleration to outstrip defenders, making him extremely dangerous in transition. Step-overs, flip-flops and pirouettes aren't necessarily his thing, but he does make use of feints to throw opponents off. Frequently he will slow to almost walking pace, lull the defender in and feint to accelerate, then race away on the outside. 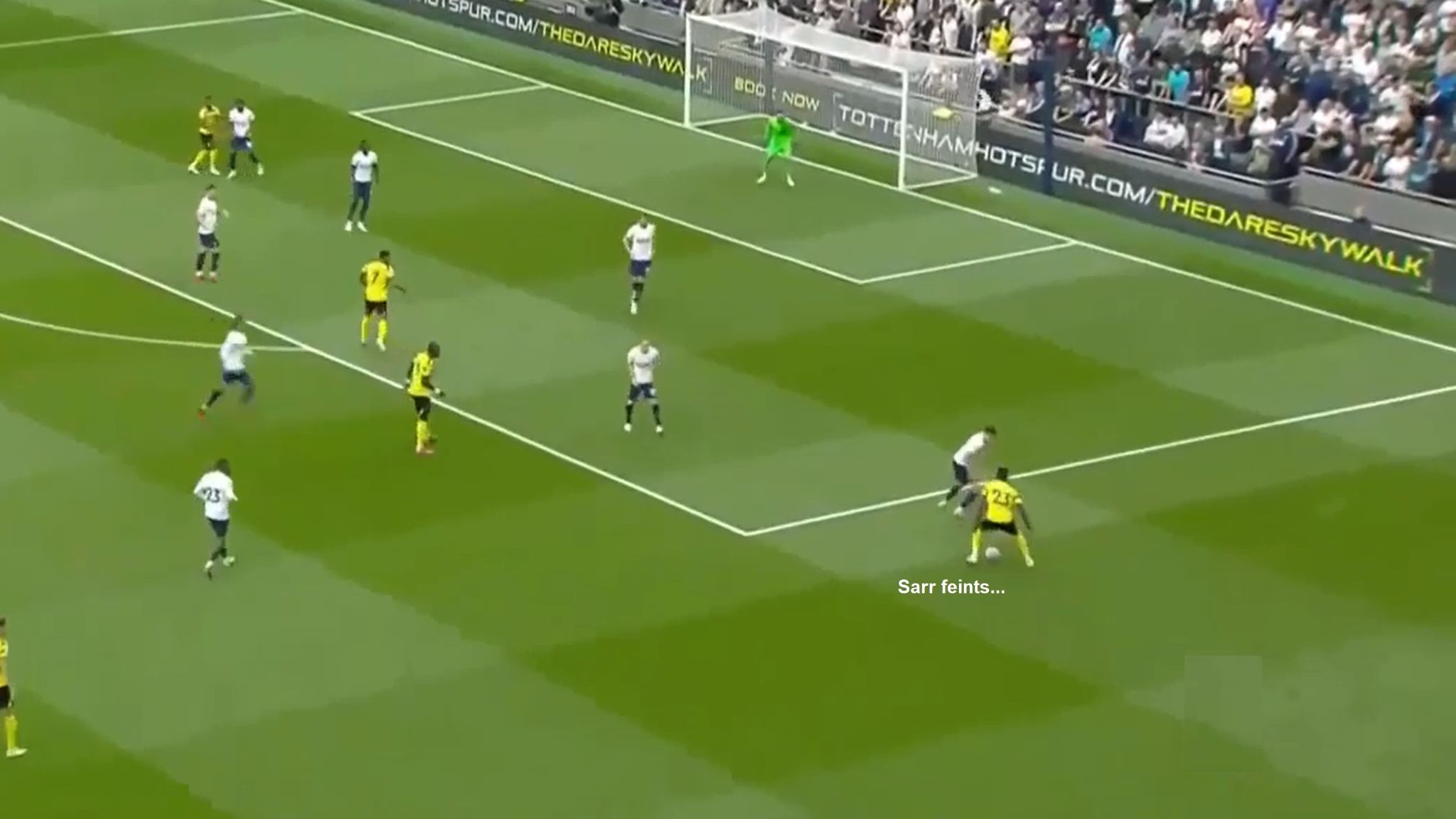 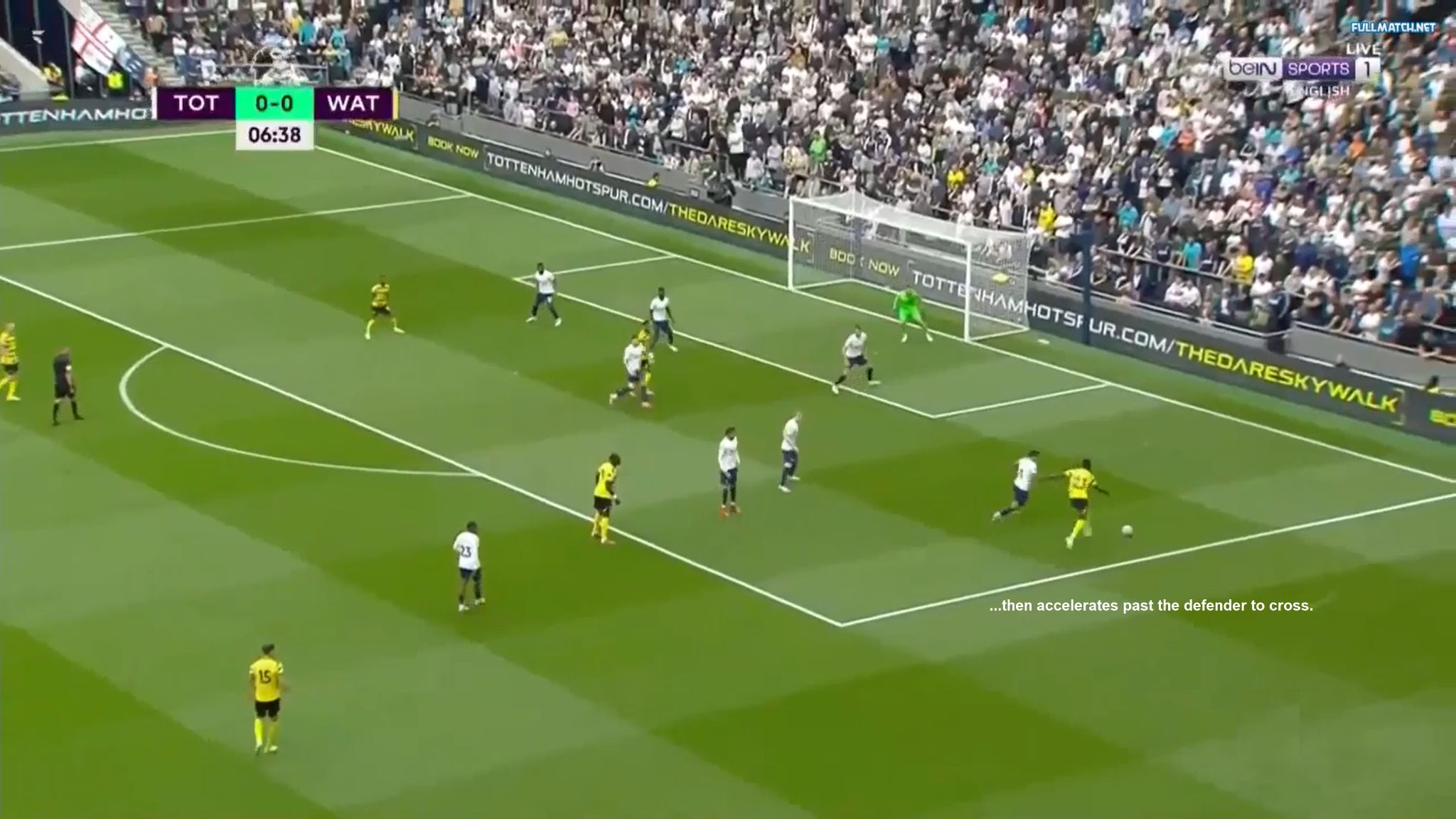 Sarr's close control sometimes lets him down, and he can rely on his long legs and speed to bail him out when he is in danger of losing the ball. However, he also has enough strength to keep the ball under pressure from behind, as well as the capacity to turn on a penny.

The best wingers are not only highly effective in 1-versus-1 scenarios, but offer an end product too. That can be a quality final ball, a shot from range, or finishing skill. Sarr has a good scoring record over the last two years and in his last year with Rennes, suggesting he has the potential to be a productive winger who hits between 15 and 20 goals per season.

Michail Antonio, Bruno Fernandes and Mohamed Salah are the only players in the Premier League with more than the three goals Sarr has to his name so far this term, while only 20 players average more shots per game. Without the long-range shooting threat, these numbers originate from Sarr's intelligence to find space behind the last line or in the penalty box.

He will often take up a position inside the opposition left-back, and run the channel almost like a striker, getting in behind to cross, cut back or shoot. And, if he finds himself inside the box, he is difficult to keep tabs on. Not only is he quick, but he makes clever runs from the blind side across defenders to finish first time. This is how his opening goal against Norwich City came about, and it demonstrates the sort of finishing instincts typically seen in strikers. 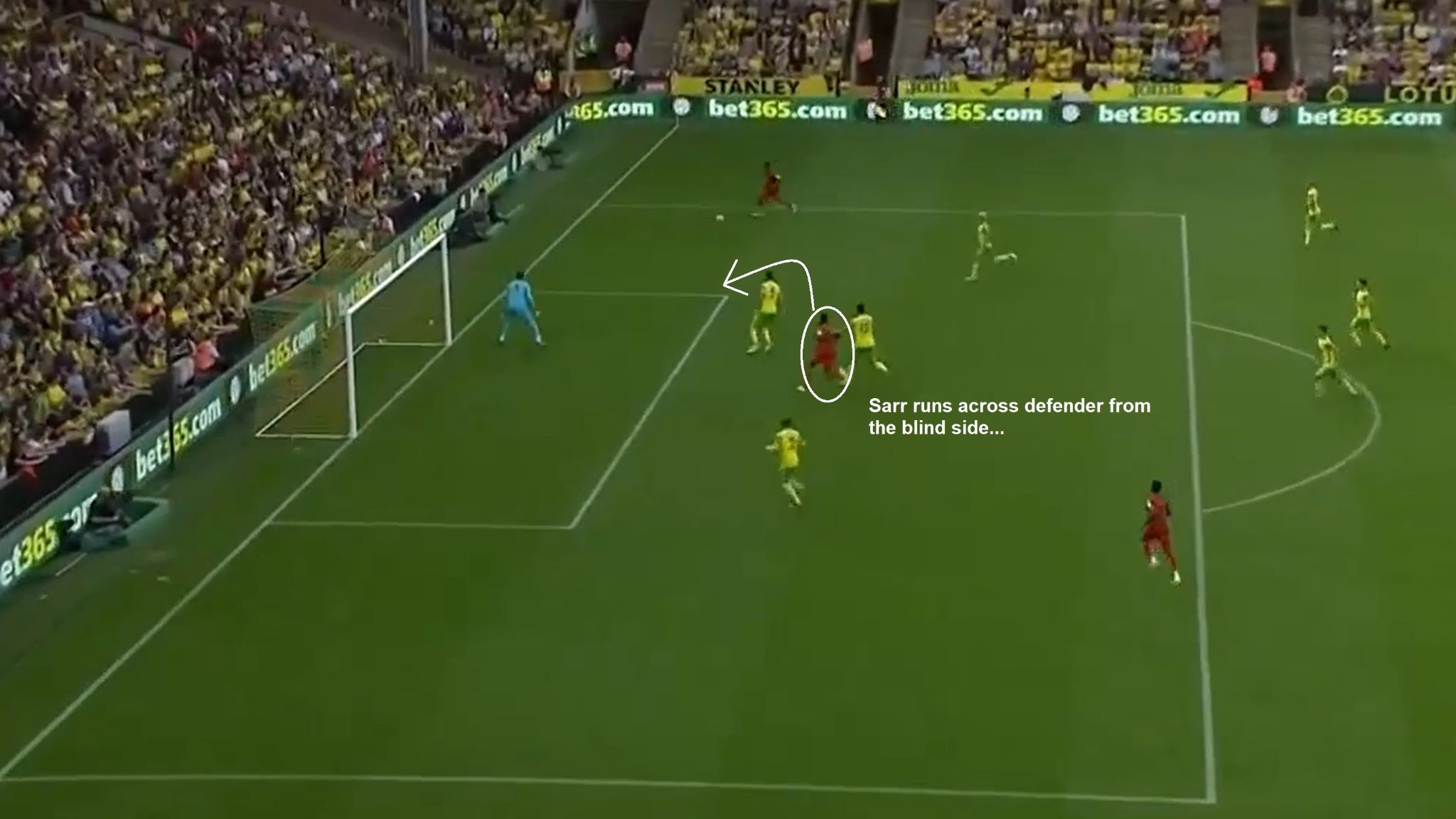 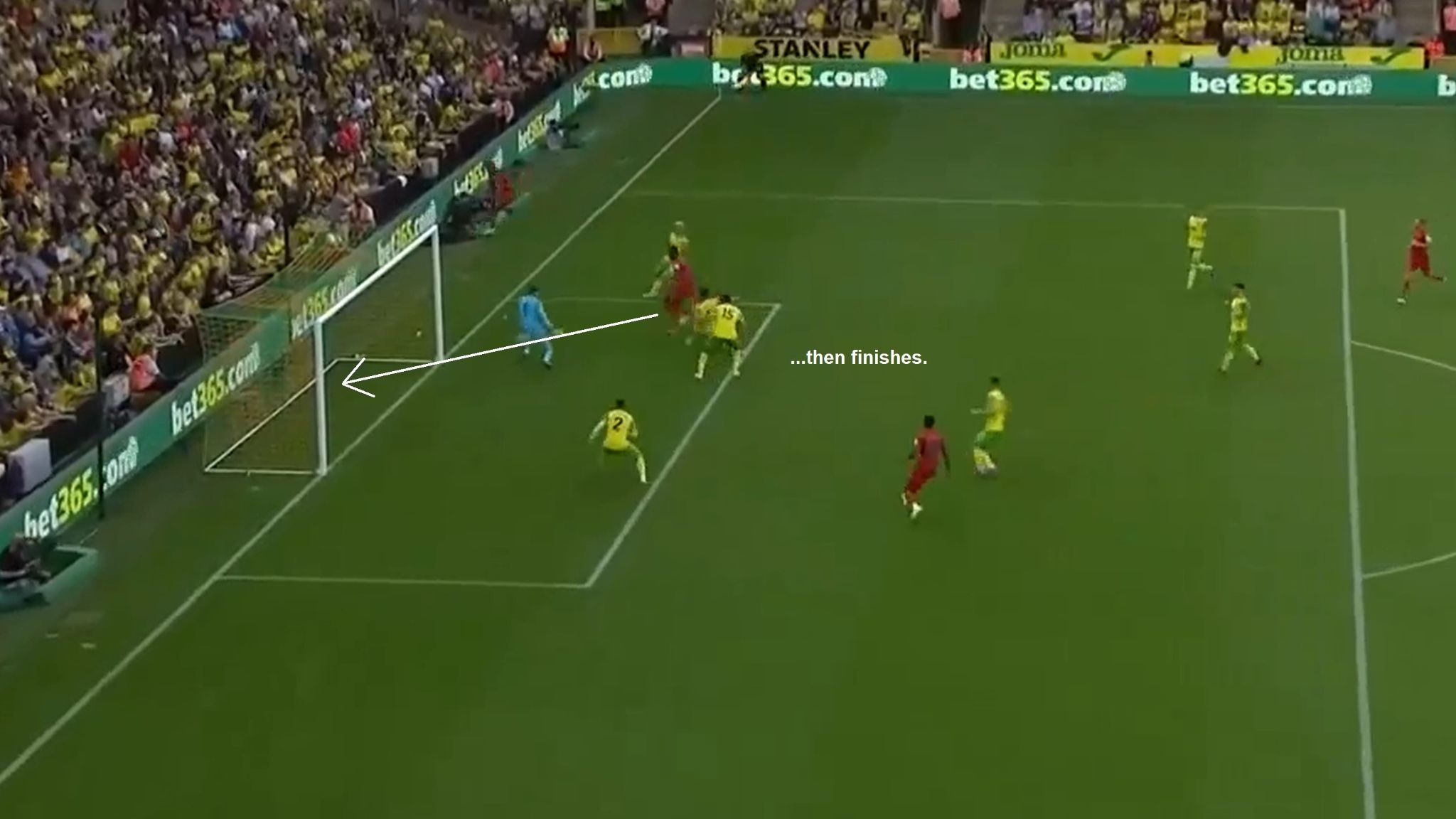 Sarr scored one header last season and, at 6ft 1in, aerial threat is something he could develop to make himself a more rounded finisher. On the ground, he is very right-footed, and will even run around to cross on his favoured foot rather than use his left. He rarely puts in high balls; instead he looks to hit the by-line through a one-two or a turn of pace, get closer to goal, then find teammates in the box with low crosses or cut backs.

While he doesn't play many high crosses against a set defence, Sarr does play tantalising crosses in transition, when there is a bit of space and he can whip the early ball into the 'corridor of uncertainty' between defence and goalkeeper. In truth, some of these crosses deserved more. If Joshua King and Emmanuel Dennis can start to anticipate these balls in and hit the front post more often, Sarr will add assists to his goals.

Sarr is in the right place at Watford, but there has been plenty of interest in him from clubs higher up the Premier League hierarchy, including Liverpool and Manchester United. In outstanding form and with his 24th birthday coming in February, this season could be his last at Vicarage Road before he moves onto a higher level.

Fast with a superb change of pace and good movement, Sarr is dangerous on and off the ball. With the ball in space he is devastating, as defenders simply cannot keep up with him once he gets going. And in the final third he is efficient, whether that's in picking out teammates with a low cross or hitting the box to finish. On top of all that, he is increasingly capable of playing inside, handling pressure and keeping the ball in tight areas.

Moving to a title-challenging Premier League side would of course bring new challenges. Sarr would need to adapt to facing low blocks more often, and having less space to play in. He may need to work on his left foot to become a more unpredictable dribbling threat. But he ticks so many of the other important boxes. A clever runner and dangerous dribbler who scores consistently, it's a matter of time before Sarr attracts more serious interest from Europe's biggest clubs.

All data is per WhoScored.com.