The 2020/21 winter transfer market saw several LaLiga clubs strengthen their squads, often operating within careful financial limits. As clubs continue to act responsibly as they deal with the coronavirus crisis, there were more loan deals and free agent acquisitions than in other seasons. Here we cover the major transfers over January:

The biggest transfer of the winter window is surely the arrival of Papu Gómez at Sevilla. The former Atalanta captain has signed with the Andalusian club in a deal that is set to run until 2024 and he brings goals and experience with him. Last season he contributed to 26 goals for Atalanta by scoring eight himself and by assisting 18, while the season before it was 24 goals as he scored 11 and set up 13.

Looking for a spark, Getafe went out into the market this winter and signed Japanese winger Takefusa Kubo on loan from Real Madrid and Catalan midfielder Carles Aleñá on loan from Barcelona. Coach José Bordalás has developed a modified 4-2-3-1 formation to fit these two young talents in and there has already been an improvement in Getafe's form.

Uruguayan player Lucas Olaza has become one of LaLiga's most reliable left-backs over the past two years at Celta but has now upped sticks temporarily to head east to Real Valladolid. The club owned by Ronaldo Nazario were in need of reinforcements following Raul Garcia Carnero's season-ending injury. 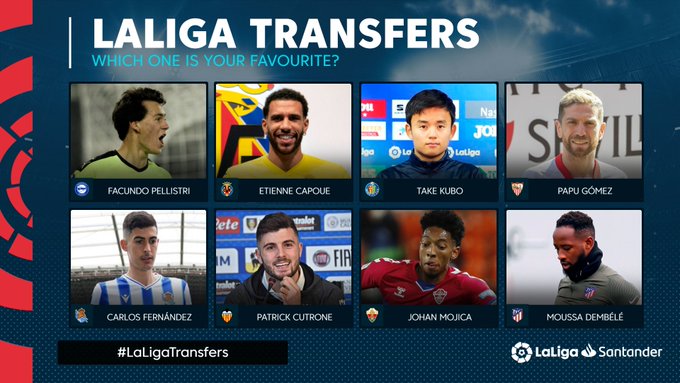 Atlético de Madrid hold a convincing 10-point lead at the top of the LaLiga Santander table, but they're not resting on their laurels. Los Colchoneros have signed French forward Moussa Dembélé on loan from Lyon to boost their attack. With the 24-year-old having scored 24 goals across all competitions for Lyon last season, his arrival is one for Atleti fans to get excited about.

Valencia have strengthened during this January window through astute use of the loan market. Right-back Cristiano Piccini has returned from a loan spell at Atalanta, while Los Che have also signed centre-back Ferro, midfielder Christian Oliva and striker Patrick Cutrone.

After four and a half years at the club, it was finally time for Willian José to move on from Real Sociedad and he departed this window for Wolves. La Real had a perfect replacement lined up, though, as they bought 24-year-old striker Carlos Fernández from Sevilla. Fernández scored 14 goals while on loan at Granada in 2019/20, so certainly knows how to find the back of the net.

A loan move to Osasuna will give Atleti left-back Manu Sánchez an opportunity to show what he can do over the rest of the season. The highly rated defender had played one LaLiga Santander game this season with Atleti – even providing and assist – but minutes were hard to come by at the Wanda Metropolitano. He's already featured three times for Osasuna and should feature a lot more before the end of the season.

Another player who has been loaned out by Atlético de Madrid is Ivan Šaponjić, with the striker joining Cádiz. The Serbian actually made his debut for his new club against his parent club and almost scored, only for Jan Oblak to pull off a miraculous save. By also bringing in Rubén Sobrino from Valencia, Cádiz have really invested in the striking department this winter.

A REPLACEMENT FOR VICENTE IBORRA

With Vicente Iborra bogged down by a long-term injury, Villarreal knew that signing a defensive midfielder would be a priority this January. They went out and brought in a replacement early on, signing Étienne Capoue from Watford. The Frenchman has already featured in seven matches for the Spanish club across LaLiga Santander and the Copa del Rey.

PELLISTRI COMES TO LALIGA TO DEVELOP

Facundo Pellistri is one of the leading talents in Manchester United's academy and had been playing with their U23s so far this term, but he'll finish the 2020/21 campaign on loan at D. Alavés. The 19-year-old Uruguayan winger is very highly rated and will have the opportunity to test himself against some of the world's best full-backs in LaLiga.