Contrary to what many expected, Jose Mourinho has made Tottenham Hotspur exciting to watch again this season. After six Premier League games, they sit just outside the top four with three wins, two draws and just one defeat to their name. No team has scored more than their 16 goals, but they have remained vulnerable at the back.

This combination of ultra-potent attacking play and defensive weakness has made them a must-watch, and there is a growing feeling that – if they can cut down on errors and become stronger at holding on to leads – they could potentially challenge for the title.

Whatever happens, Harry Kane and Son Heung-min are developing one of the best attacking partnerships in football today. Here, we at Tribal Football break down what makes their relationship so special.

Kane and Son are outstanding players with their own unique skill sets. Son is the Premier League's current top scorer with eight goals, while Kane isn't far behind him on five. But there's no question that, individually and collectively, their performance levels have improved this term.

The improvement has been aided by Jose Mourinho's tactical changes. Since taking charge last year, the Portuguese has gradually turned Spurs into a side that thrives in attacking transitions. Whenever they regain the ball, they counter quickly, maximising the qualities of their attacking players. Son's speed and movement is devastating on the break, and Kane's link play and chance creation is equally threatening.

With Mourinho's emphasis on quick counters, there is more scope for Son to win foot races with defenders and burst in behind with well-timed runs, or to get into 1v1 situations where his acceleration can win out. There's also more space in disorganised defences for Kane to get on the ball and target Son's runs with passes.

Four of the nine league goals they have combined for have come during fast breaks. Their first link-up in the win over Southampton came when Kane peeled wide to receive outside the opposition centre-backs after Spurs won the ball in midfield. Son instantly made a run centrally, and Kane picked him out to score. Later in the game, Tottenham got another goal from Kane setting up Son in transition. This time Kane received in behind, Son made the run into the box, and Kane crossed for him to score.

In the stunning 6-1 win away to Manchester United, Spurs' third came after pressing a turnover as their hosts tried and failed to play out from the back. Immediately they attacked, with Son finding Kane in the box to finish. Weeks later in the draw with West Ham United, another counter-attack saw Kane receive deep before picking out Son's out-to-in run behind the defence to finish.

Kane: from link man to playmaker

Another slight change made since Mourinho took charge has been the profile of the frontline. On paper, Tottenham play a 4-3-3, but in reality the fluidity of the attackers makes it a system unlike most others. Kane is the striker, but he does a lot more creating than typical strikers. Son is one of the wingers, but he offers a lot more goal threat than typical wingers.

Perhaps the closest comparison would be Jurgen Klopp's Liverpool, where Roberto Firmino is nominally the No.9 but takes up a lot of positions and responsibilities that a No.10 usually would, while wingers Mohamed Salah and Sadio Mane come inside a lot, threaten in behind with their pace, and score goals consistently. 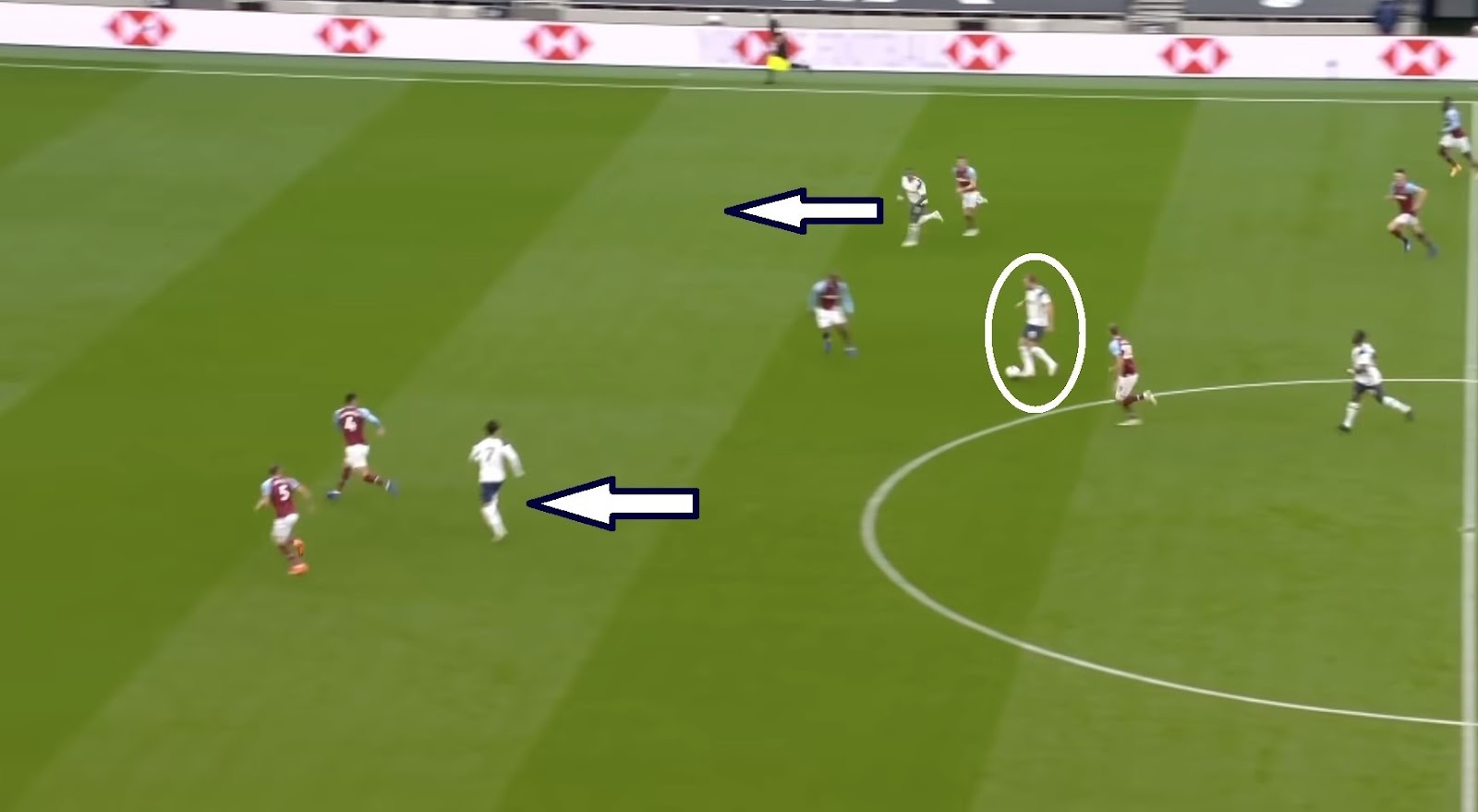 Spurs' setup (above) is difficult for opposing centre-backs to handle as it presents unfamiliar movements. Kane drops deep, away from the centre-backs, and they have to decide whether to track him or let him go free. At the same time, Son and the other winger (whether it be Lucas Moura, Steven Bergwijn or, in future, Gareth Bale) make runs in behind from wider starting positions, often blindsiding the centre-backs.

A lot of discussion regarding Tottenham's recent form has centred on the deep positions Kane is taking up during attacks and counters, but the truth is he has always had a tendency to go short, show for the ball to feet, and link play. The big difference now is he isn't just connecting attacks, but actively setting up scoring chances.

According to Wyscout data Kane's performance has improved across the board compared to last season, though there are some interesting increases in some specific metrics. The number of through passes he plays per game have more than doubled, from 1.4 to 3.1. His passes into the final third have also shot up, from 3.3 to 5, while he is also playing 0.9 more passes into the penalty area on average. The share of passes he plays that are forward has also gone up, from 27.3% to 33.1%.

The data underlines what many viewers are watching – that Kane is not only continuing to drop deep, but he is creating more. When Spurs are attacking, he is essentially acting as the playmaker, picking out teammates in more advanced areas. Son, evidently, has been the biggest individual beneficiary of this subtle change.

With a fluid front three that sees Son making lots of runs inside and behind, an increase in Kane's playmaking responsibilities, and a greater focus on quick transitions, Tottenham are building the perfect platform for their two finest attacking players to shine. And in turn, Kane and Son are getting the best out of each other.