How it happened: What Tottenham must fix to prevent repeating Man Utd, Arsenal defeats

One of the Premier League's growing narratives is that Tottenham can't hold onto a lead.

In their last four matches they have taken the lead four times, but have won just once. During this short stretch of form, Arsenal and Manchester United came from behind to beat Spurs, while Newcastle pocketed a point against them thanks to a late equaliser. With Champions League qualification appearing increasingly unlikely, Jose Mourinho is under pressure.

Despite ranking among the top teams at taking the lead, Tottenham are among the worst in the league when it comes to dropping points from winning positions. In total they have lost 18 points this way (six draws, two defeats). Their inability to hold on is seen as the one major weakness that will cost them a top-four finish. Furthermore, this issue is widely believed to be linked directly to Mourinho's tactical approach.

Mourinho garnered a reputation for negative football while in charge of Real Madrid, where his side took on the role of 'antihero' to Pep Guardiola's intense-pressing, quick-passing Barcelona. While he eventually dethroned that legendary Barca team, then won silverware with Chelsea and Manchester United, Mourinho has not been able to change public perception regarding his style of play.

But reputation does not necessarily equal reality. Tottenham have no problem scoring goals under Mourinho. Some of those goals have been breath-taking. And while he isn't a coach who prescribes lots of set circuits for his players to rehearse and ingrain, there are moments of effective, flowing football. Tottenham's goal against Manchester United last weekend was one example.

Pierre-Emil Hojbjerg dropped between the centre-backs, drew pressure from Bruno Fernandes, then shifted the ball out to Eric Dier. 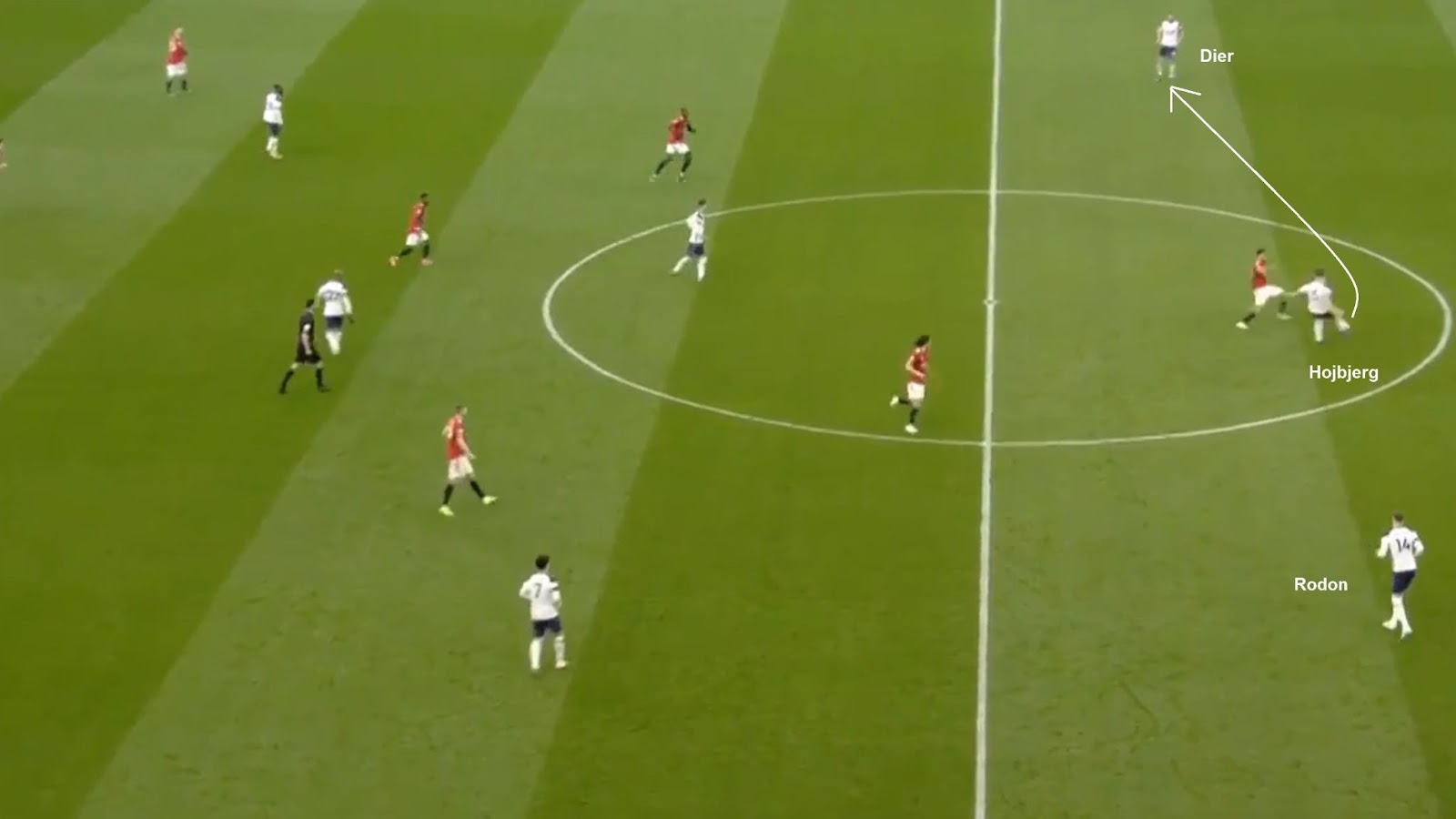 Giovanni Lo Celso dropped into base midfield to receive from Dier, then bypassed United's midfield to find Tanguy Ndombele free between the lines. 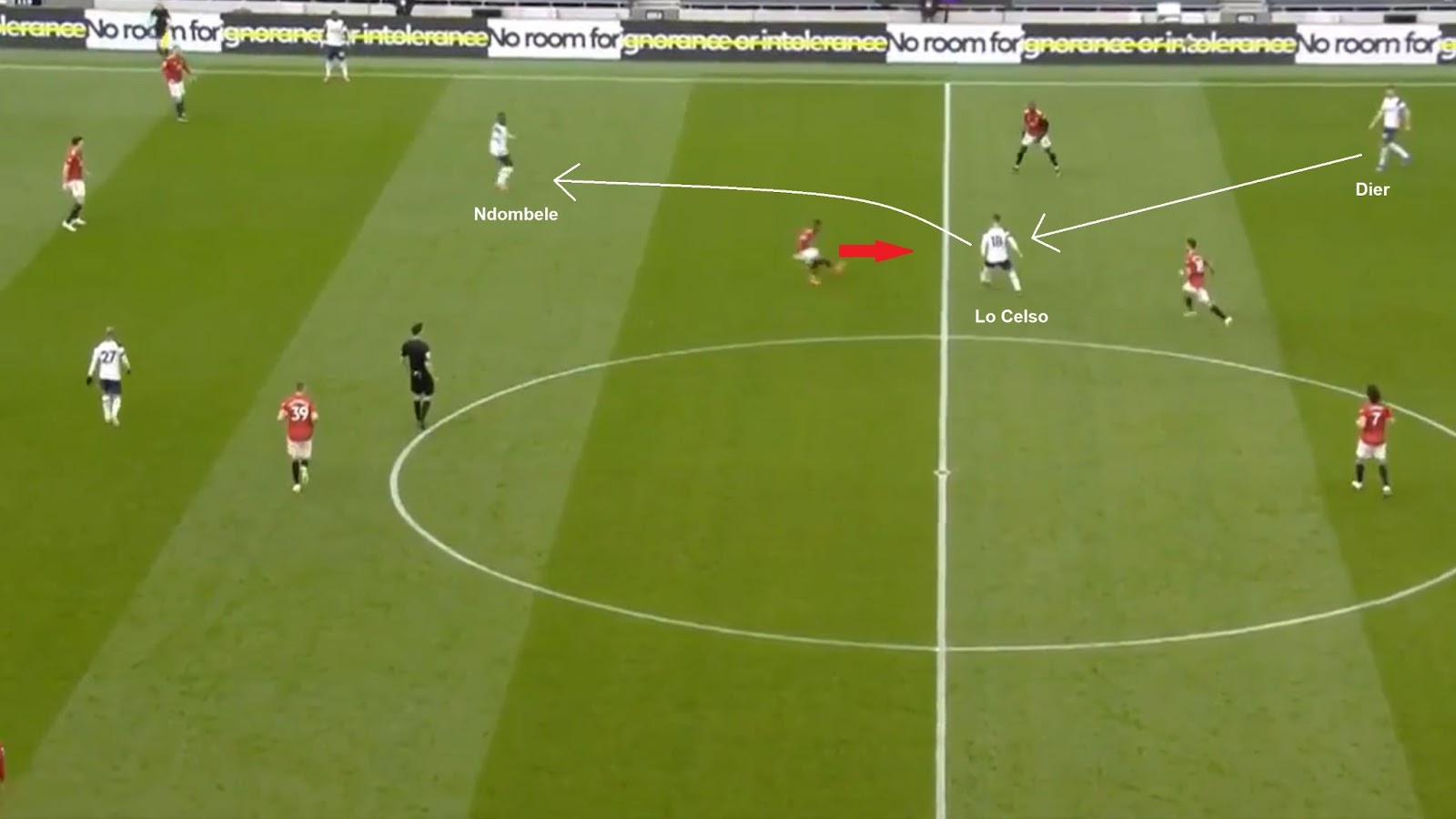 Ndombele fired a ball into the feet of Harry Kane, who laid off for Lucas Moura's third-man run. 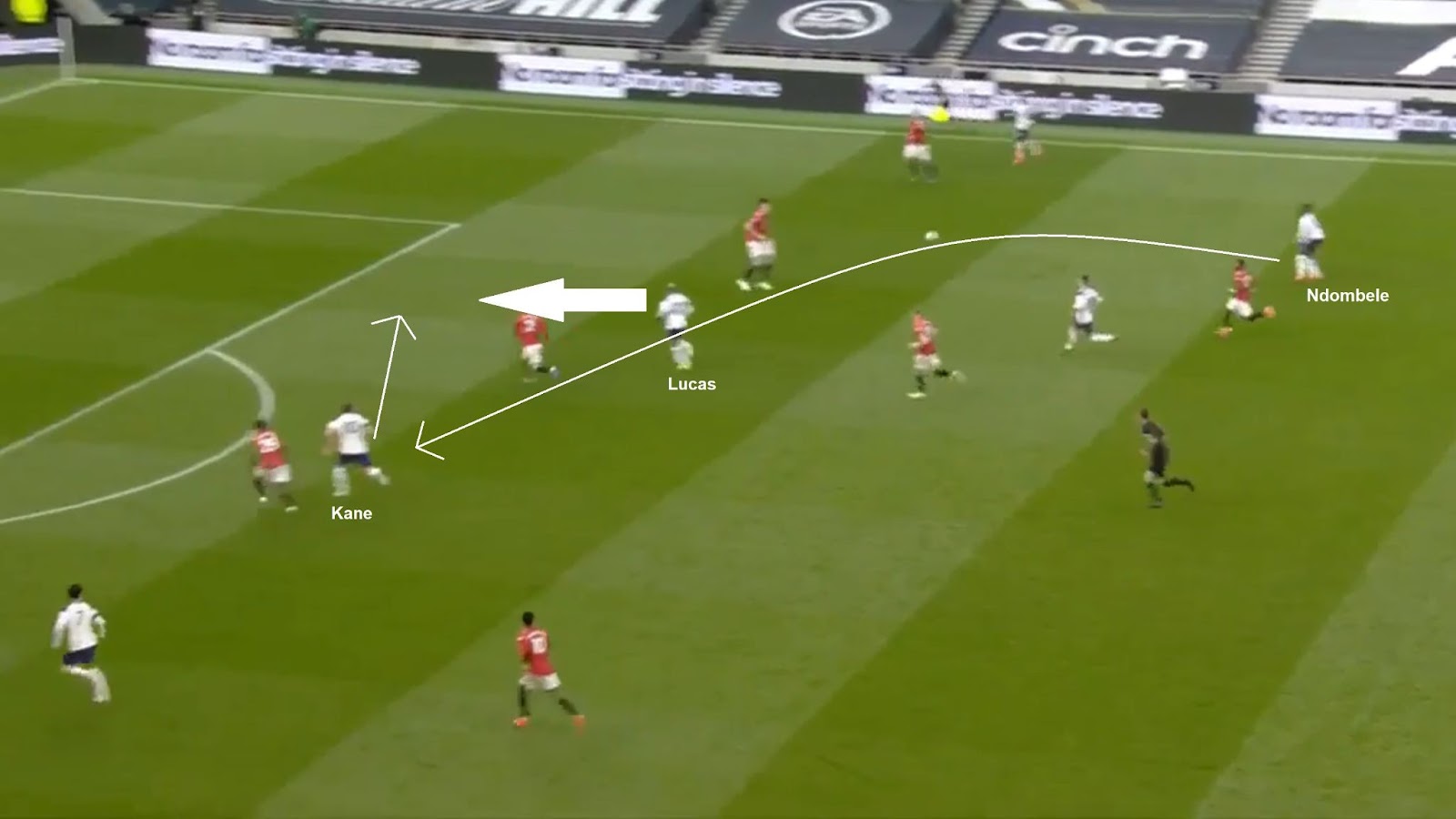 Lucas avoided shooting instantly, instead playing the extra pass to Son Heung-min in a better position to score. Spurs moved the ball from back to front with good off-the-ball movement and passing before quality combination play in the final third. 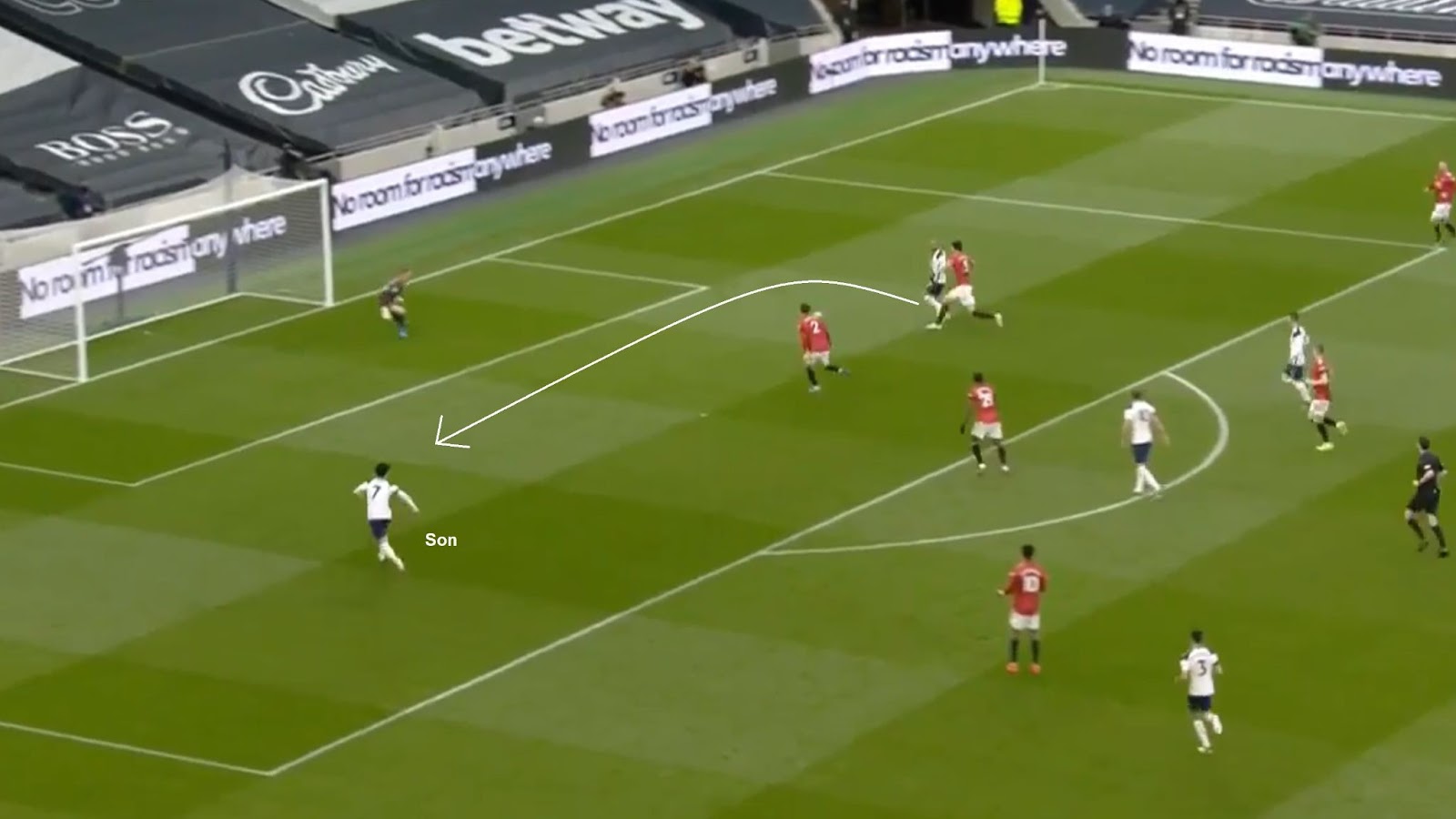 A more valid observation would be that Mourinho's defensive approach to big games is more conservative than some of his peers. As he often did while manager of Manchester United, Mourinho often asks his wingers to track back and act as auxiliary full-backs when defending against high-quality opposition. This lets the actual full-backs come in and form a narrow back four. Generally, this method is taken when a manager doesn't want his centre-backs to have large spaces to defend on their own: essentially, it is a quantitative approach to fighting a qualitative problem, defence in numbers as a means of reducing the likelihood of individuals being caught out.

However, this isn't always the tactic for Spurs in big matches.

PRESSING INTENSITY, OR A LACK THEREOF

In the defeat to Manchester United, Mourinho set his team up in a defensive 4-1-4-1 with man-marking in midfield and Kane splitting the centre-backs. This pressing strategy reduced United's short options and forced them to play more directly. And previously, against Arsenal, Mourinho set Tottenham up to defend in a 4-4-2 with the strikers blocking passes into midfield and the wingers pressing forward on sideways passes between Arsenal's centre-backs. 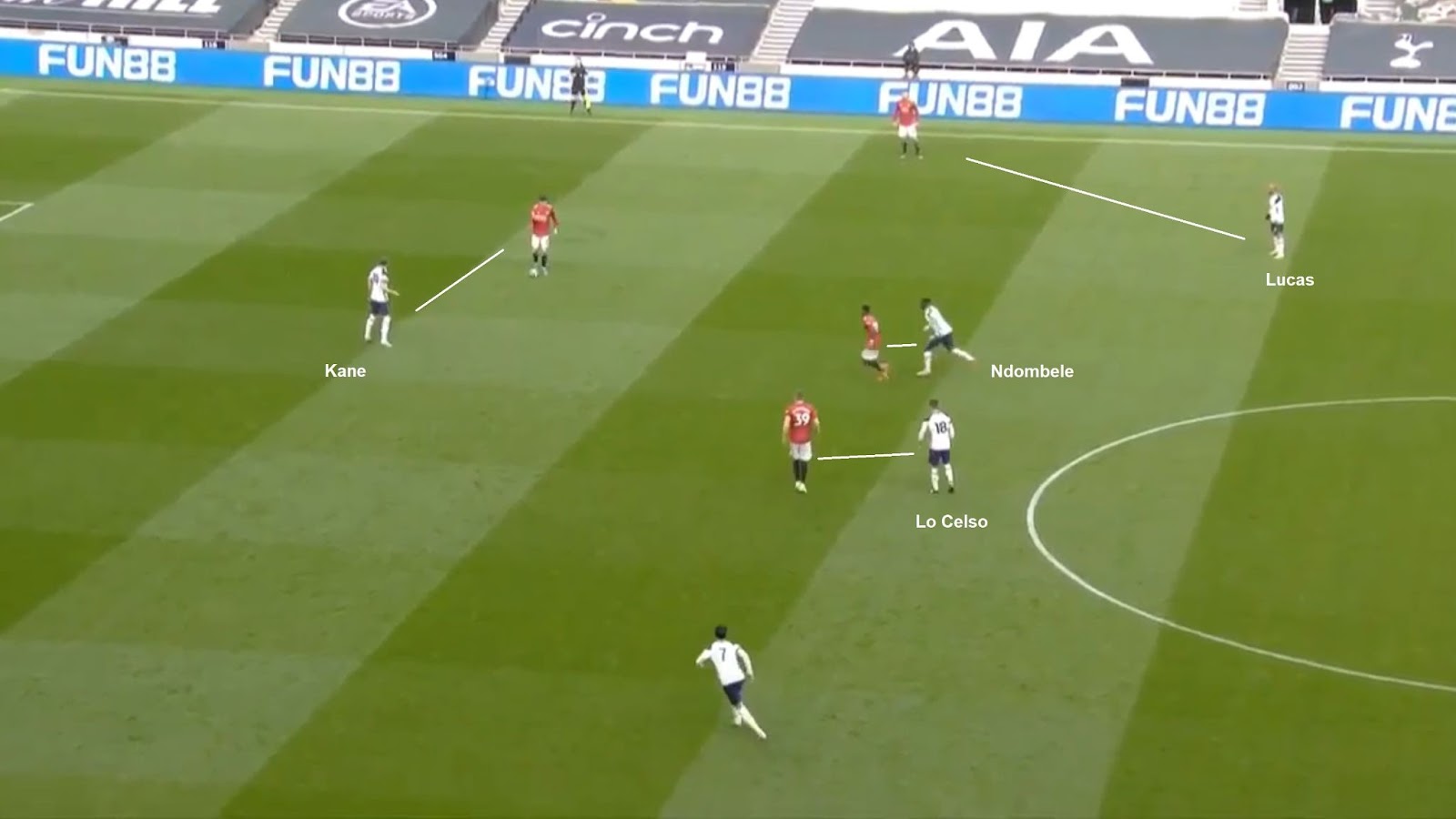 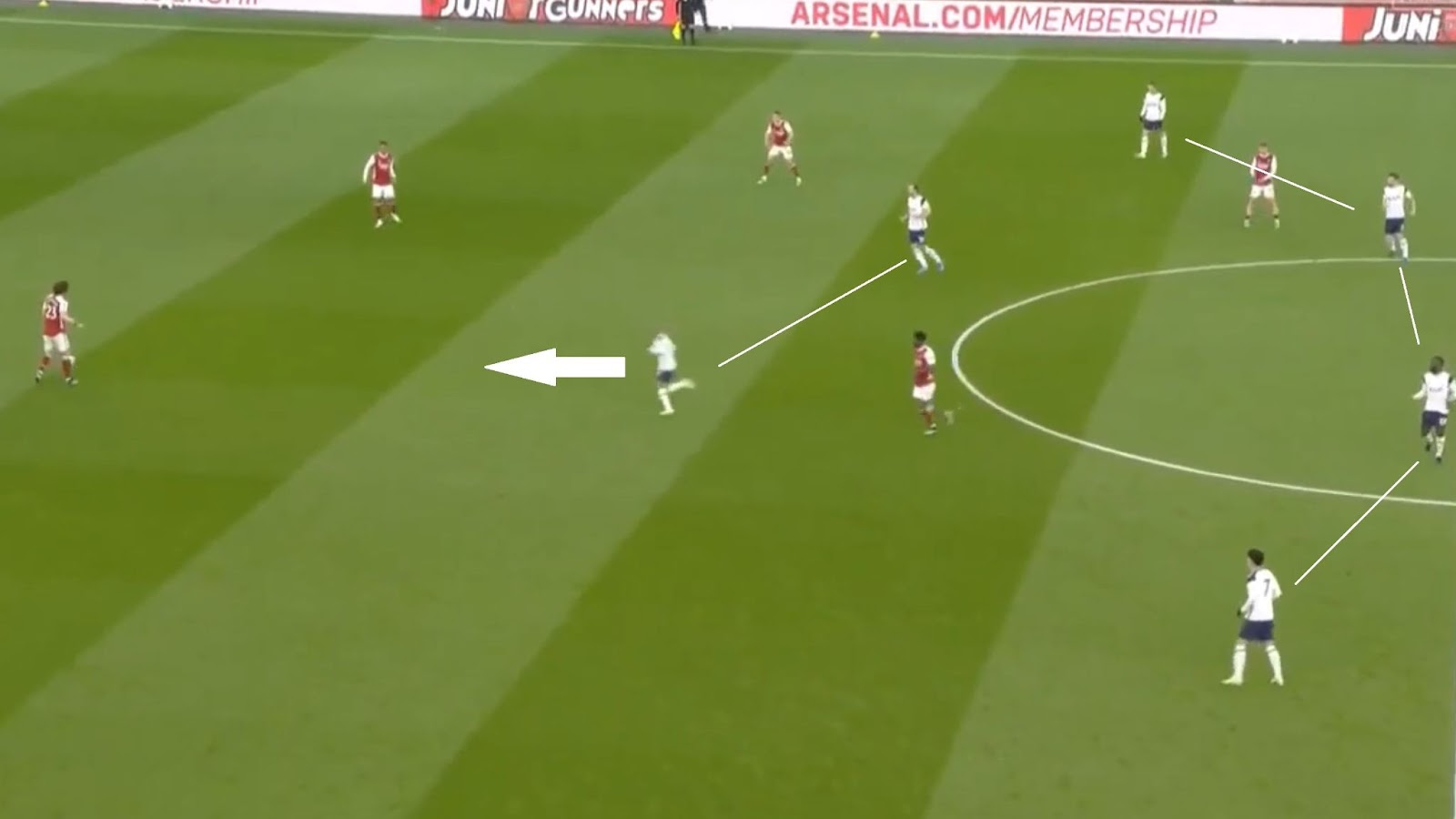 Evidently, Mourinho doesn't go into all big games with a defensive mind-set. But he does approach some with caution. This explains why Tottenham's PPDA is slightly lower than that of Manchester City, Manchester United and Leicester, but significantly higher than that of Arsenal, Everton and West Ham.

PPDA is a metric that measures, on average, how many passes a team allows an opponent to make before disrupting them with, say, a tackle or an interception. Considering their PPDA of 11.54, Mourinho's Spurs aren't specifically a 'high-pressing team'. Rather, they are one that adapts to the opponent and situation.

This is where many see a contrast between the mentalities of Mourinho and his predecessor, Mauricio Pochettino. However, Tottenham's PPDA was declining year-on-year even when Pochettino was in charge: it fell from 6.44 in 2016 to 9.40 in 2019. At the time Pochettino left, 12 games into the last season, Spurs' PPDA was 10.98. 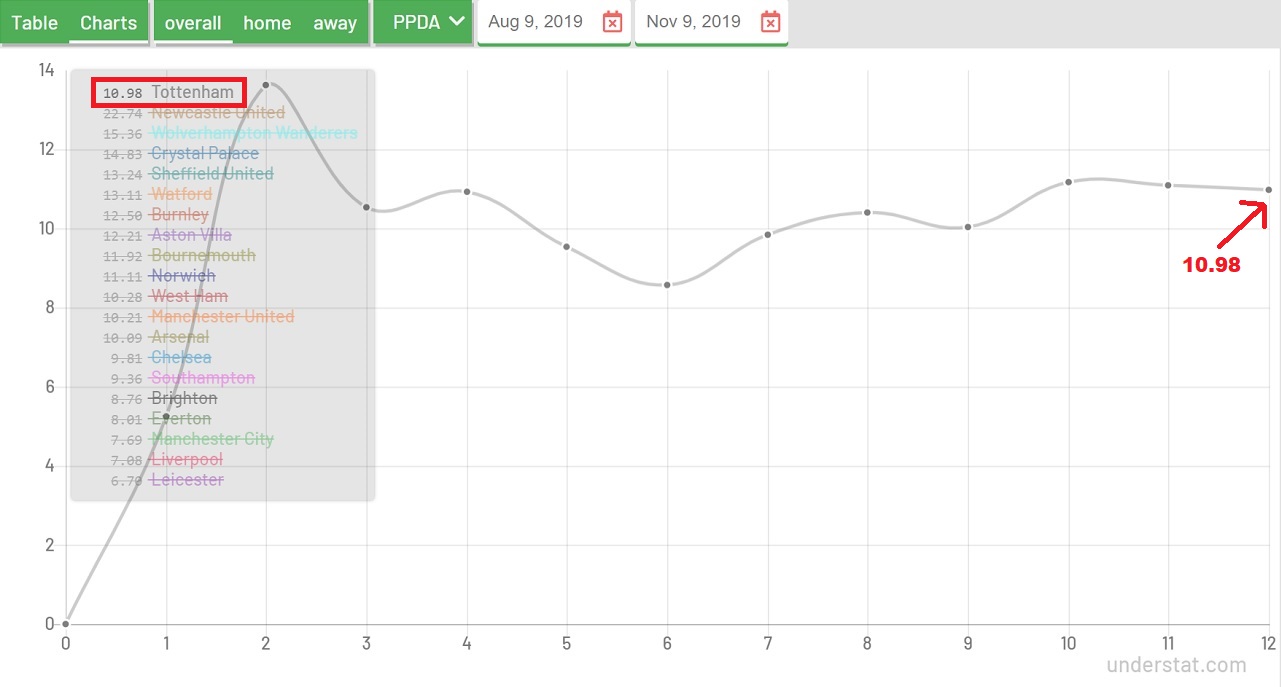 By the end of the season, after six months of Mourinho, it was 10.94, indicating that - if anything - Spurs were ever-so-slightly more intense in their pressing.

The drop-off in this metric this season could be down to Mourinho, but it could just as easily be related to the impact of COVID on fixture schedules and, consequently, training plans, as well as the psychological impact of a lack of fans in stadiums to roar teams on. After all, Tottenham are not the only team to experience a slight downturn in pressing intensity this season. Champions Liverpool have had similar issues.

SO WHAT'S THE REAL PROBLEM?

Mourinho is also flexible in his mid-game decisions. He is proactive in trying to identify and solve problems. Against Manchester United, Paul Pogba started to come infield and play more centrally as a way of overloading Tottenham's midfield 4v3. Noticing Pogba's growing influence on the game, Mourinho brought on Moussa Sissoko for Lo Celso and went from a defensive 4-1-4-1 with man-marking in midfield to a 4-4-1-1 with a flat midfield four. Sissoko sat next to Hojbjerg and helped nullify Pogba. 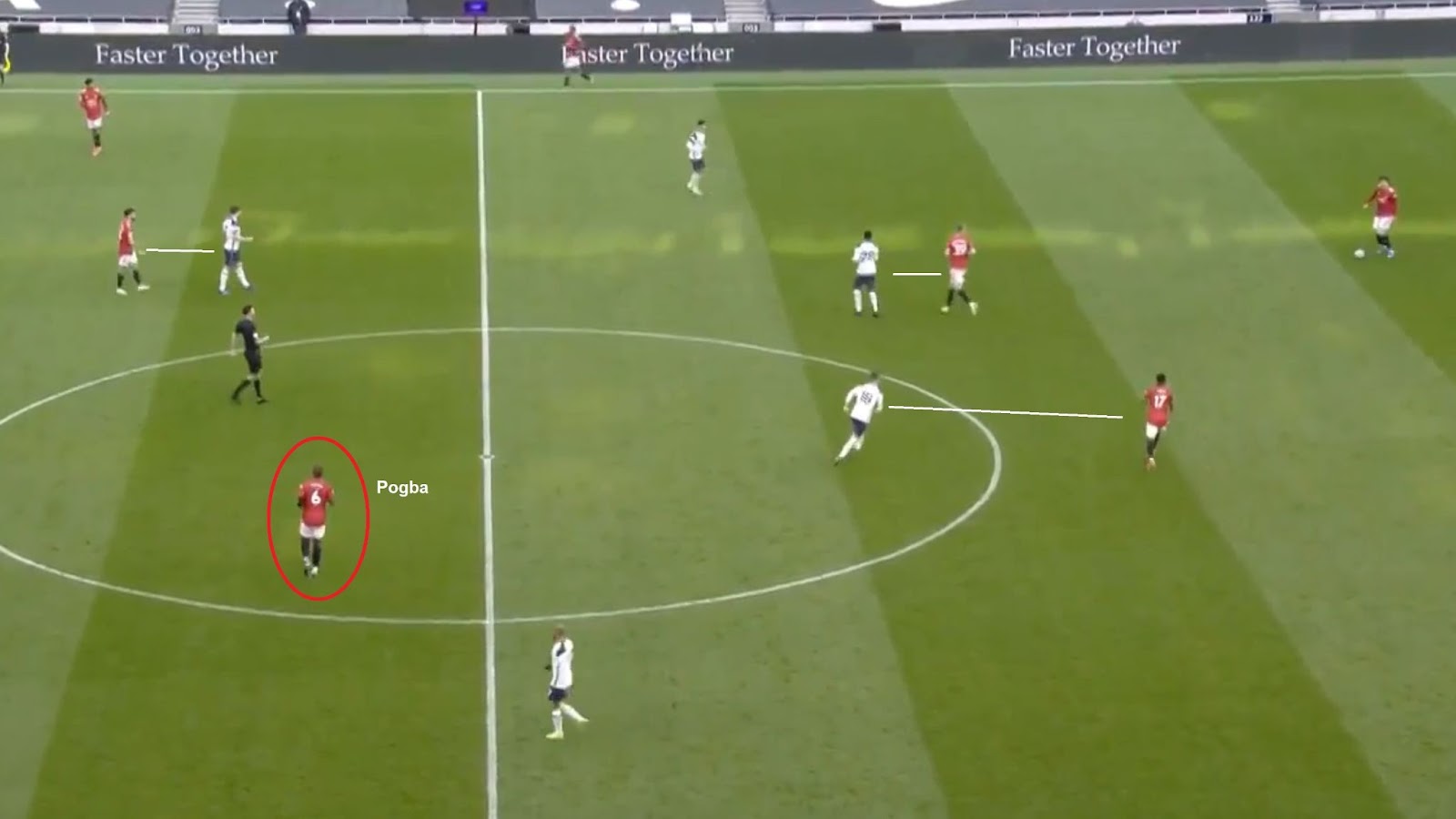 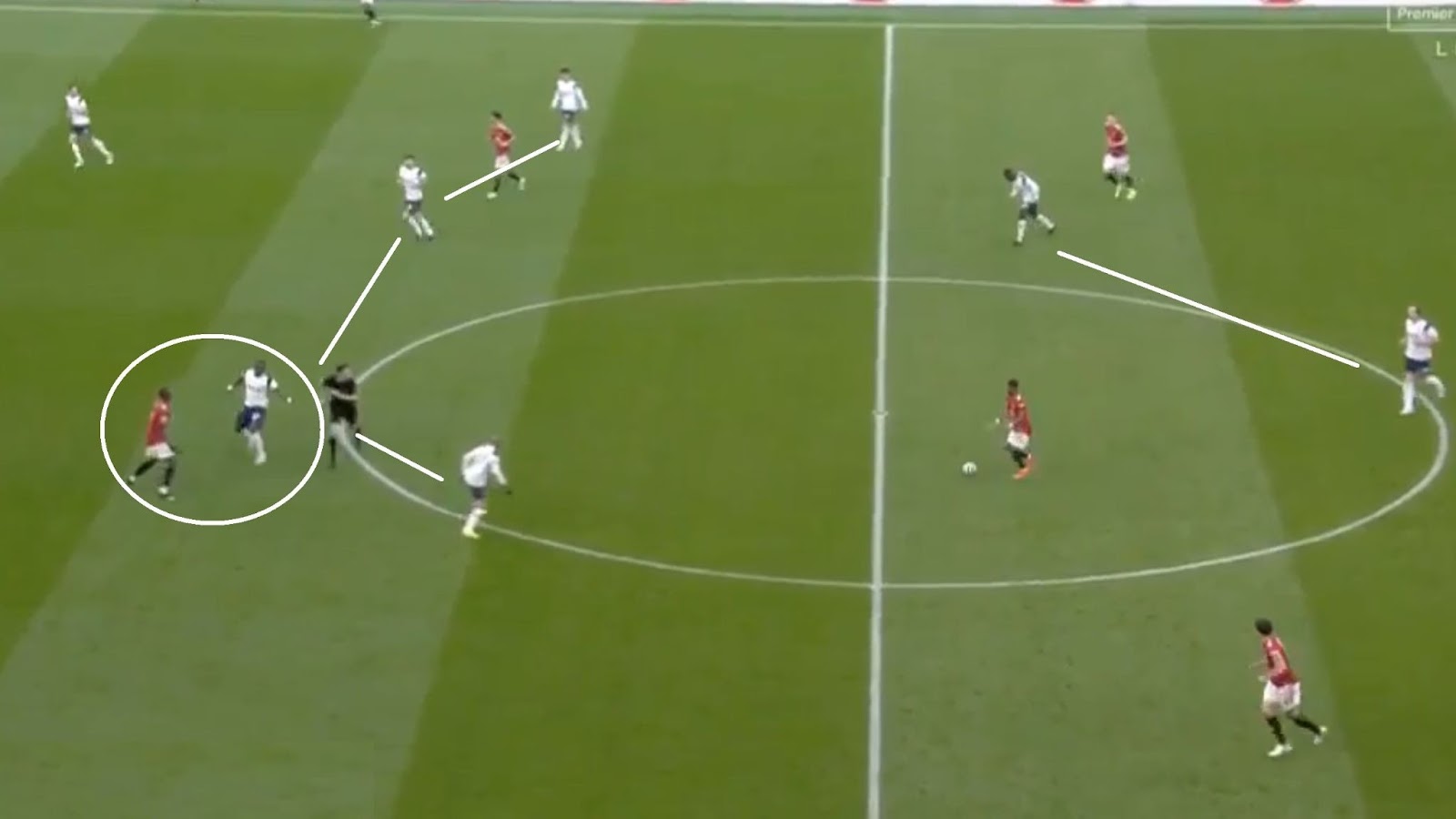 Yes, Tottenham started to defend deeper, but only because Mourinho saw a tactical issue that needed to be dealt with. His original plan wasn't working anymore, so he changed the plan. While the score didn't improve from there, the new plan was effective in so much as it reduced Pogba's ability to get on the ball and drive through midfield.

The real issue for Tottenham is that they are poor when defending their own penalty box. This has been evident since the very first game of the season, when they lost 1-0 at home to Everton. They conceded from a Dominic Calvert-Lewin header that day after failing to defend a free kick.

Calvert-Lewin's goal is one of 13 that Spurs have conceded this season from a high cross (via open play or a set piece). That's 37% of their Premier League total goals conceded. This doesn't include penalties scored by Newcastle and Leicester that came from Tottenham's inability to defend high balls into the box. 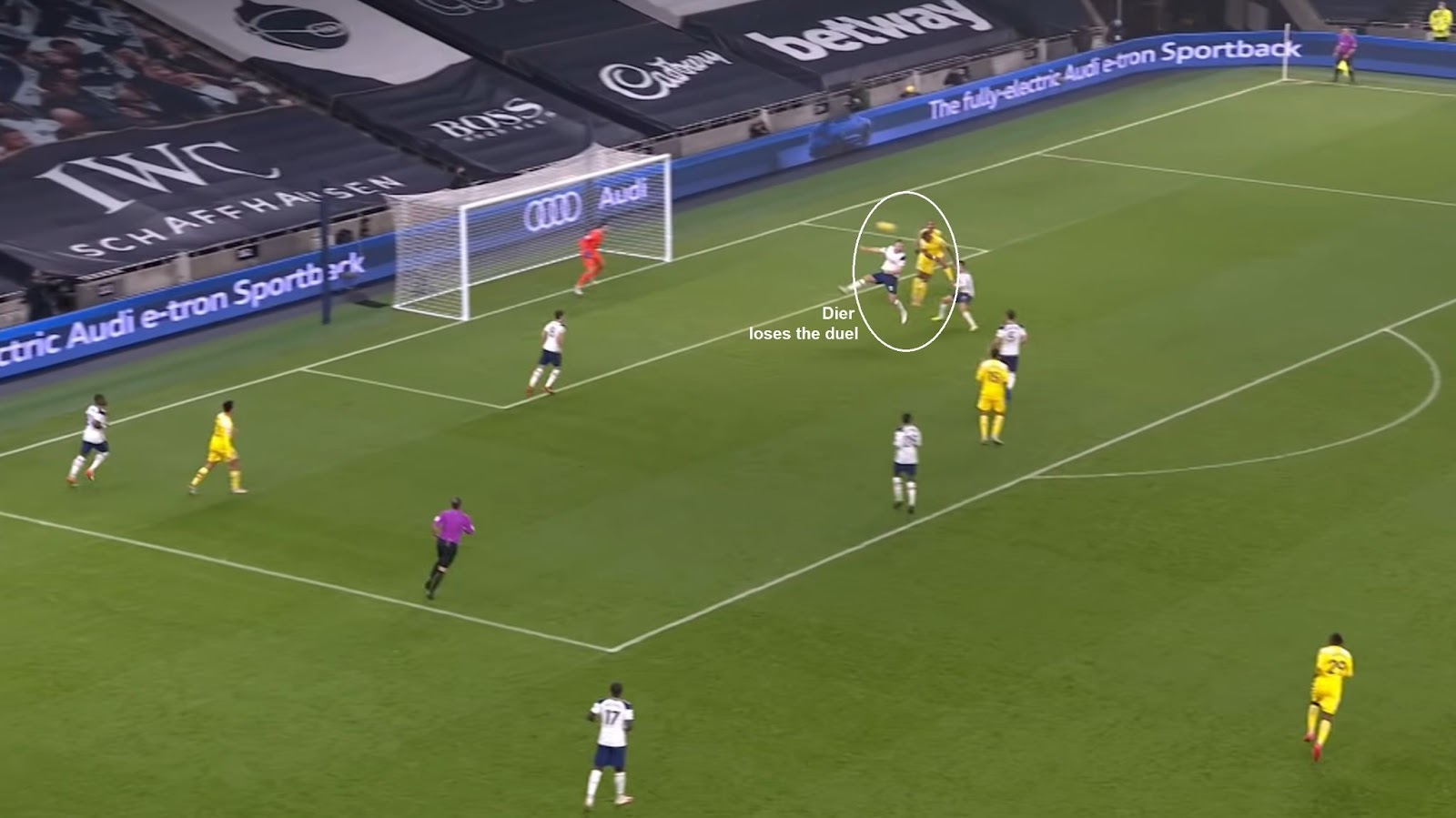 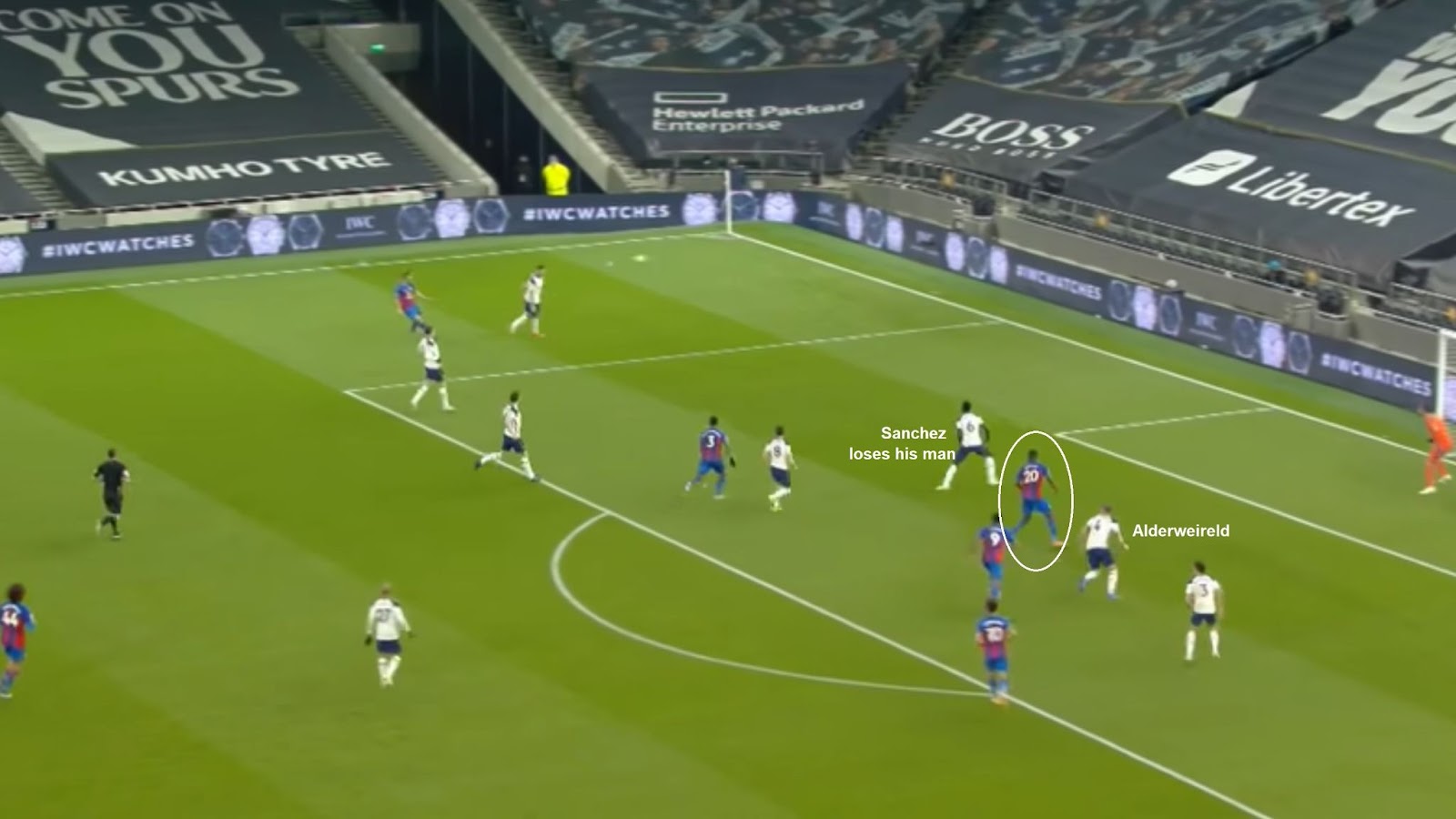 Mourinho hasn't found a regular centre-back partnership, rotating Dier, Joe Rodon, Toby Alderweireld and Davinson Sanchez. The lack of a recurring partnership can't be good for communication and organisation in the back line, which perhaps explains some of the errors seen. However, it's glaringly obvious that most of Tottenham's centre-backs just aren't good enough at defending the high ball: too often they lose their man, get caught under the ball, or simply lose their aerial 50/50s.

Individual errors defending high crosses into the box is a big problem for Tottenham, and the issue is only emphasised when they try to defend a lead. Mourinho will no doubt want to sign a new centre-back or two in the summer to fix the issue. Until then, he has to find a way of making his team more resilient when defending their own penalty area.