Chelsea became champions of Europe for the second time on Saturday night, beating Manchester City 1-0. The result was a small shock. Manchester City were building towards this moment and, having regained their Premier League title, this felt like the crucial last step forward for the club. But Thomas Tuchel's Chelsea had beaten Pep Guardiola's City twice already, once in the league and once in the FA Cup, and that one-on-one dominance continued in the Champions League final.

Tuchel opted not to make major changes for this game. He fielded his preferred 3-4-3, with goalkeeper Edouard Mendy behind a back three of Cesar Azpilicueta, Thiago Silva and Antonio Rudiger. Reece James and Ben Chilwell flanked a midfield duo of N'Golo Kante and Jorginho, while Timo Werner was supported up front by Mason Mount and Kai Havertz.

The only intriguing selection was Havertz, who hasn't always found a place in Tuchel's frontline. Here he got the nod ahead of Hakim Ziyech and Christian Pulisic. It turned out to be a good decision, with Havertz scoring the only goal of the game just before half-time.

Guardiola has a tendency for big changes in important Champions League games. These have frequently not worked in the past, and the same happened here. Ederson was in goal as per usual, with Kyle Walker, John Stones, Ruben Dias and Oleksandr Zinchenko comprising the back four. However, there was no natural defensive midfielder to protect them: Rodri was left out alongside the experienced Fernandinho. Instead, Ilkay Gundogan, transformed as a goalscoring midfielder this term, was tasked with sitting deeper than usual.

Ahead of Gundogan was a fluid five. Raheem Sterling and Riyad Mahrez were predominantly the wide men, while Kevin De Bruyne, Phil Foden and Bernardo Silva moved freely between them. In basic terms it was the same striker-less 4-3-3 that led City to the Premier League title, but the absence of a proper holding midfielder was a surprise. 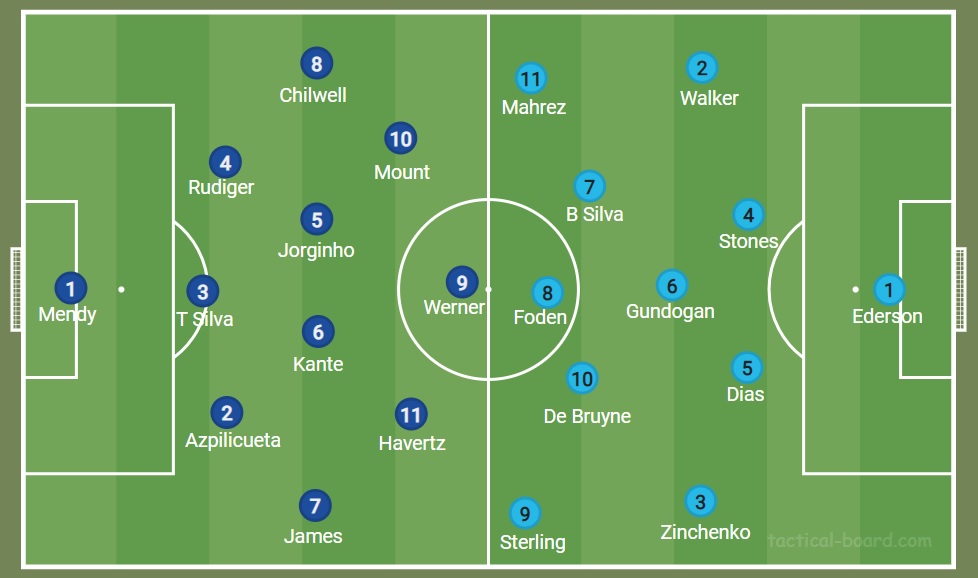 Manchester City pressed high in a bid to force turnovers deep in Chelsea's half. Occasionally this worked, but more often than not Chelsea found a way out. Sometimes, they even turned the high press against City.

Guardiola set up his defence to try and cut off Chelsea's centre-backs and limit their short passing options. Sterling and Mahrez would press Azpilicueta and Rudiger while taking away the pass out to James and Chilwell. Two City midfielders would get tight to Kante and Jorginho, with Gundogan covering behind. But Chelsea handled the pressure, working in triangles to retain possession and find a way forward.

Once Chelsea got out of the high press, they regularly tried to turn City's back line with balls in behind or over the top for Werner to chase down. Walker and Zinchenko had to deal with Chelsea's inside forwards and wing-backs, leaving space behind them for Werner to exploit and get 1-versus-1 with Dias or Stones. The City centre-backs struggled to deal with Werner's quick runs behind, one of which led to the goal.

After a quick switch of play from right to left, Chelsea got Chilwell and Mount into a 2-versus-1 on Walker. This prompted Stones to leave the back line to help, leaving Dias on his own with Werner. The German striker ran from inside to out, dragging Dias with him and making space through the centre for Havertz to run into. Mount found him with a perfectly weighted through ball, and Havertz rounded Ederson to score. 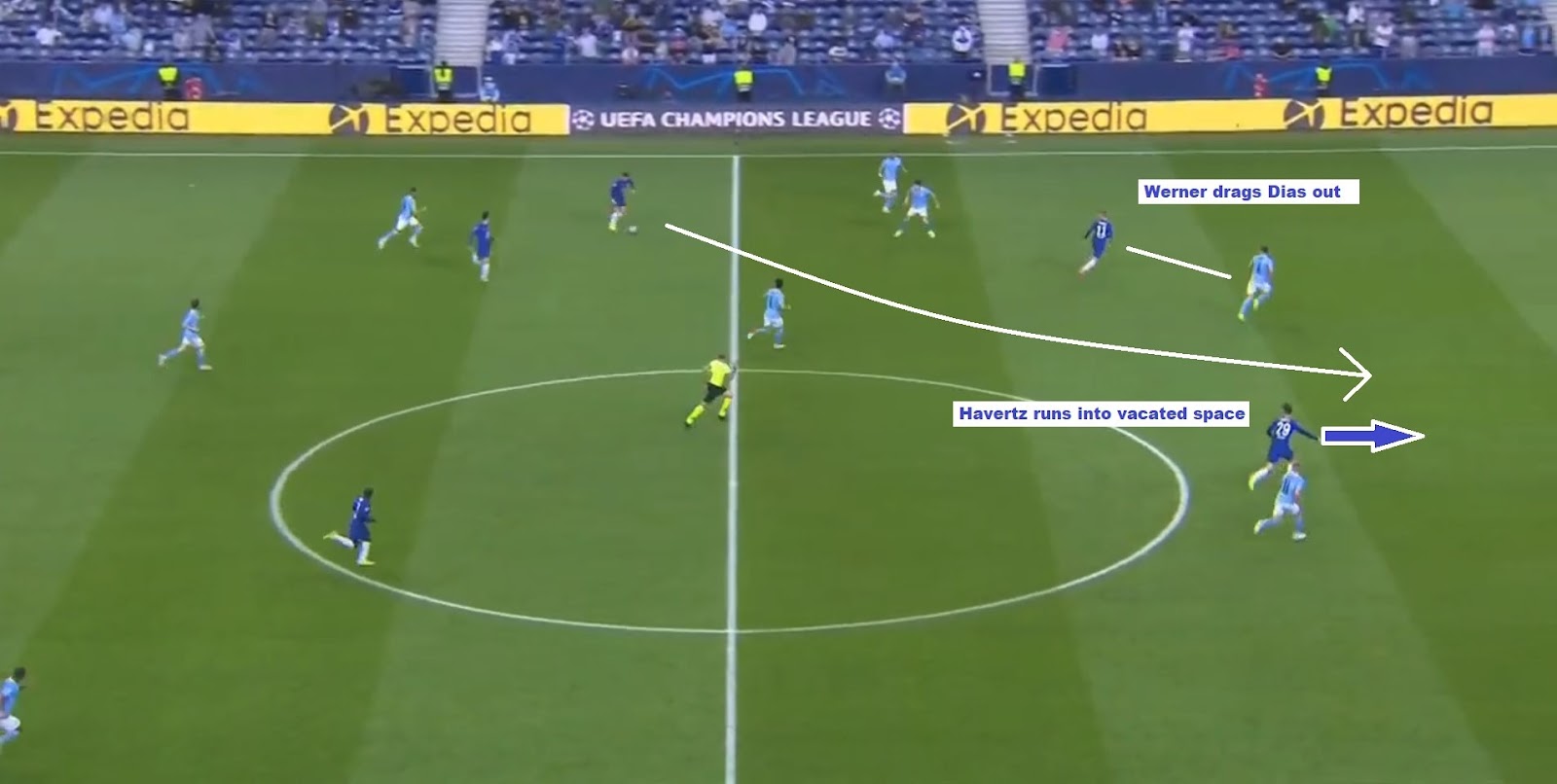 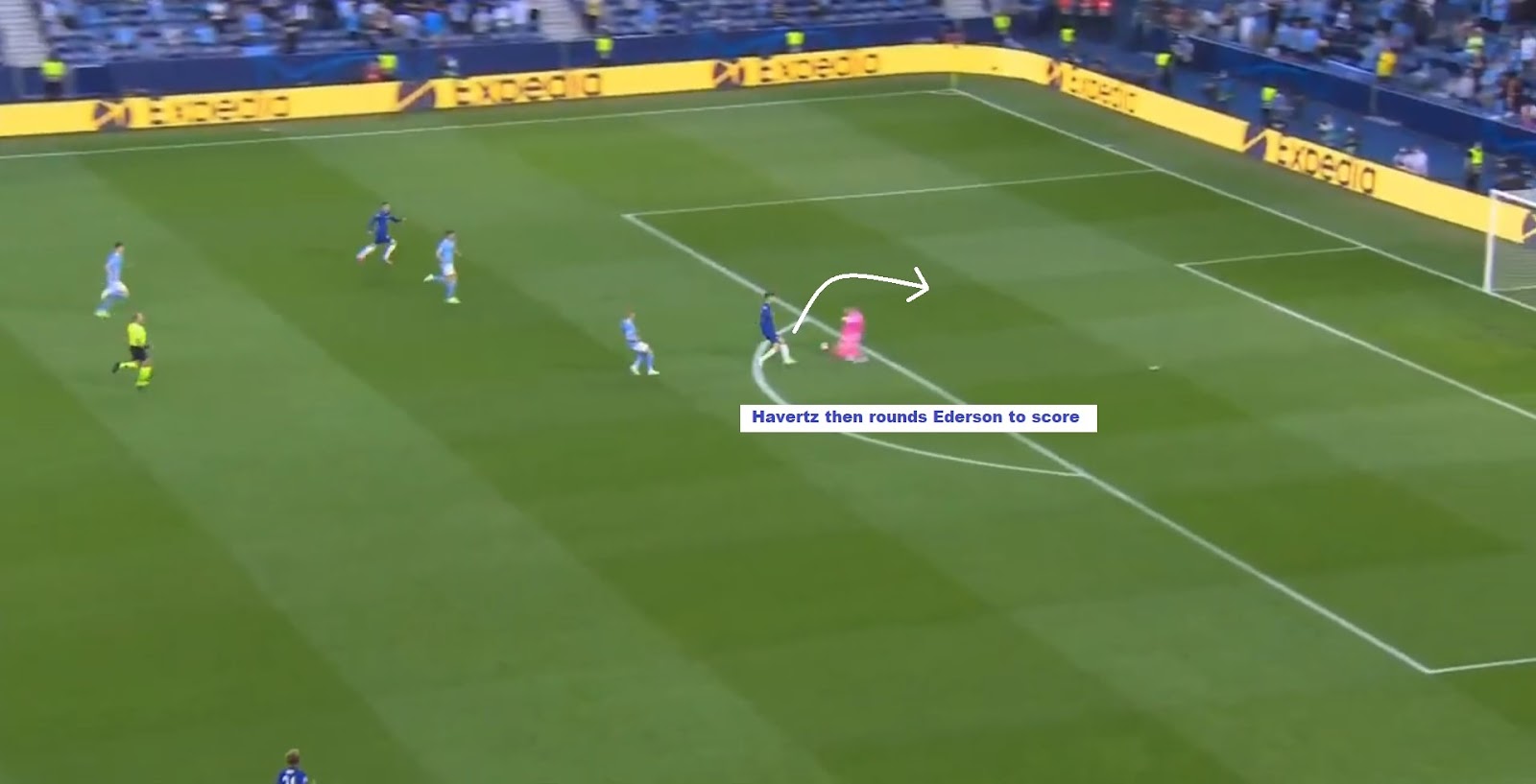 Chelsea were finding ways out of Manchester City's pressure and Werner was running riot against Stones and Dias. It was a first half to forget for Guardiola, made even worse by the fact his own attacking approach wasn't working.

Tuchel set Chelsea up to defend in a 5-2-3 shape, with Havertz and Mount narrowed in next to Werner, helping to block passes through the centre of midfield. Havertz and Mount did an exceptional job of working back, blocking passing lanes or intercepting when City tried to force the ball through. Their effort levels were superb and integral to nullifying City's possession game. 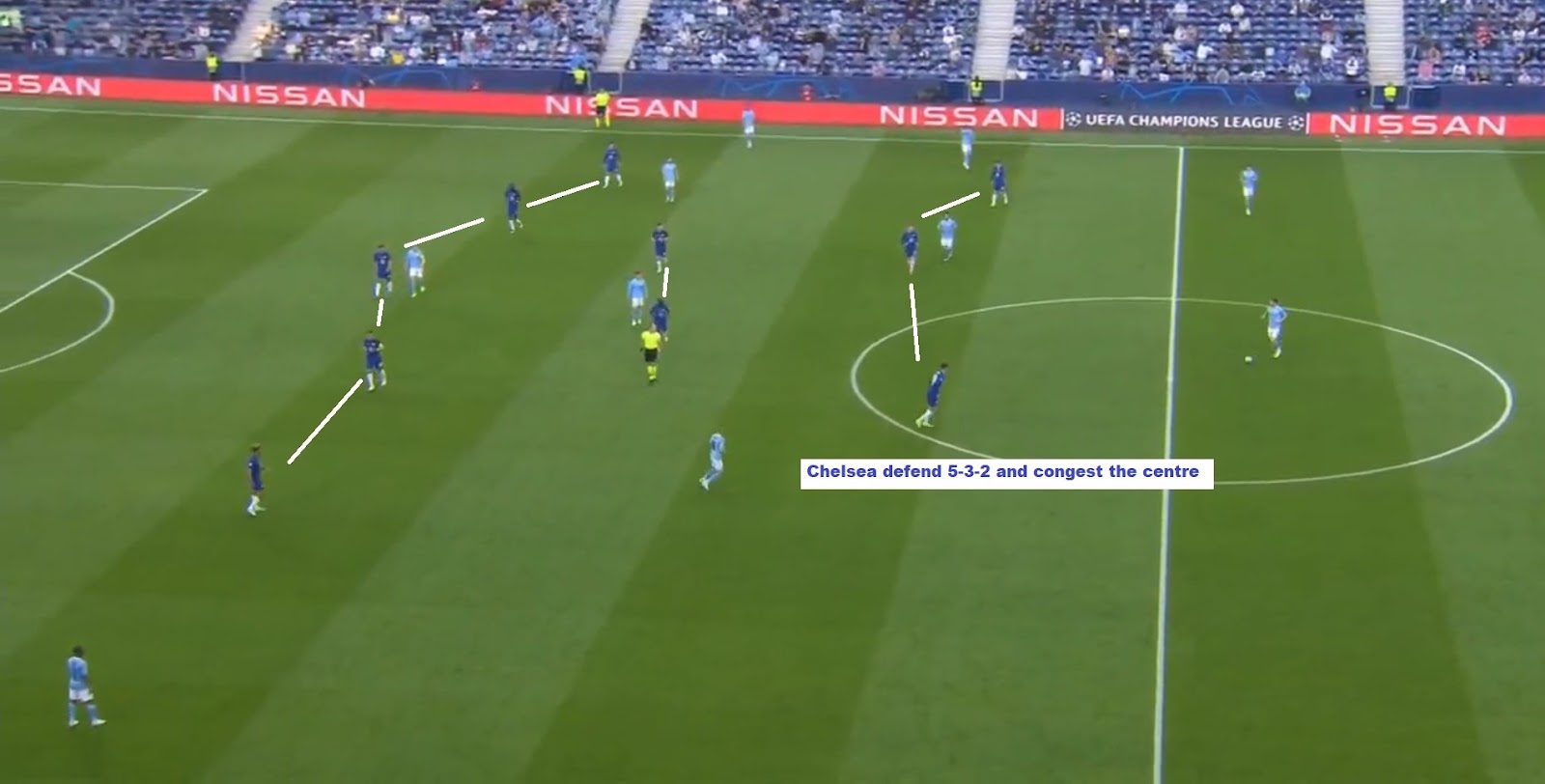 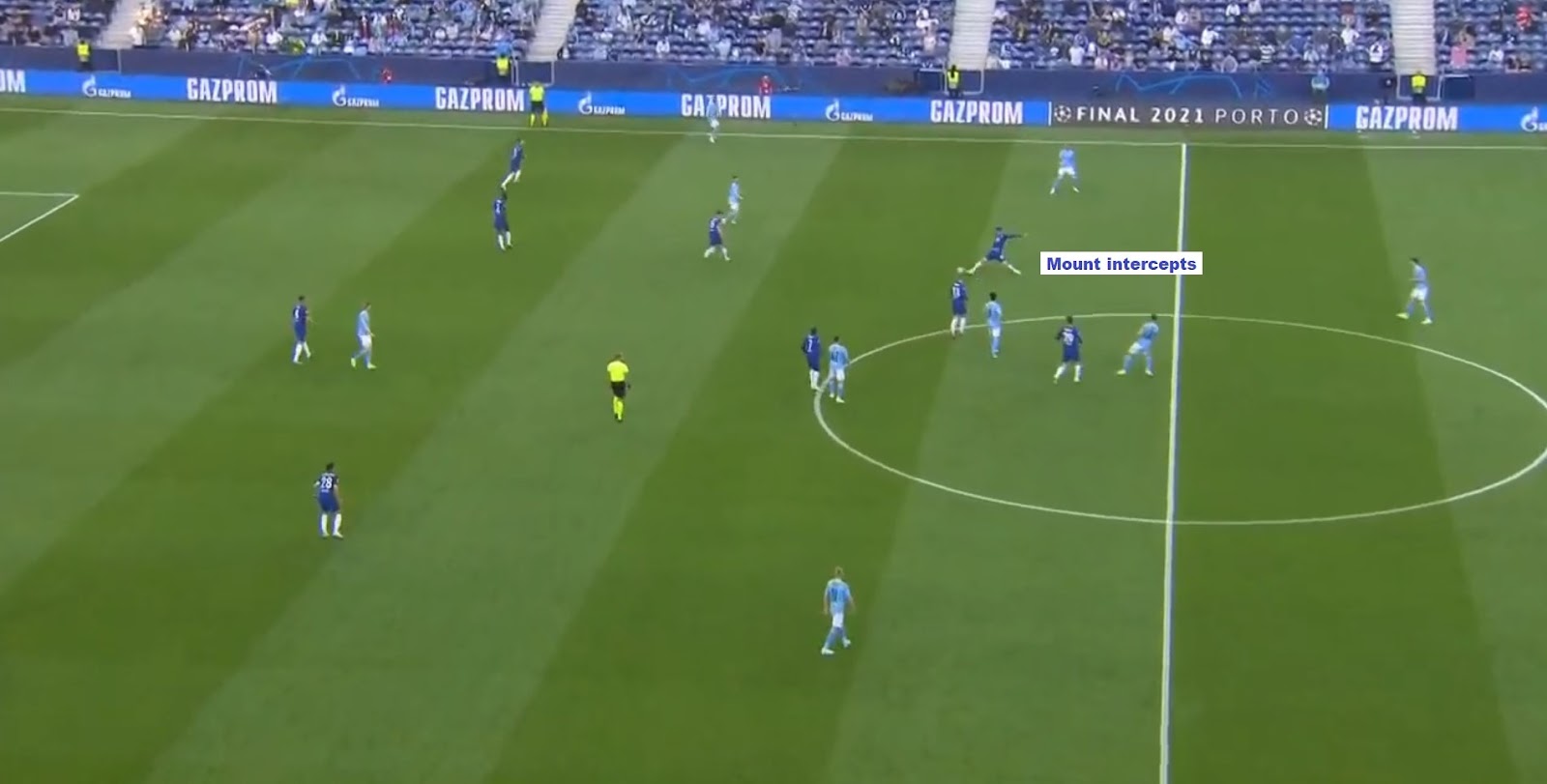 Behind the zonal front three there was some intense man-to-man defence from Kante and Jorginho in midfield. Anytime Chelsea's central midfield pair stepped forward to apply pressure to their men, they left space behind them. City tried to infiltrate this space with the movement of their forwards, but time after time they were followed by Azpilicueta and Rudiger.

With the centre heavily congested by Chelsea's narrow front three and man-to-man defending from the midfielders and outside backs, City could not penetrate through. They would have to go around or over, and until the final 15 minutes they chose the former, keeping the ball on the deck and trying to work controlled attacks. But out wide, James and Chilwell performed brilliantly, quieting Sterling and Mahrez with pressure and well-timed tackles.

CITY UP THE TEMPO, BUT LEAVE IT TOO LATE

After a first half of frustration, Manchester City upped the tempo in the second in a bid to find an equaliser. Previously they only really threatened in transition, with quick counter-attacks led by the dribbling of Sterling and Foden. Now they had to find a way through an obstinate Chelsea block that became lower and lower as victory came closer.

Fernandinho was introduced to midfield and the interplay became much sharper. All of a sudden there was more one-touch play, faster combinations, and Chelsea were opened up multiple times.

First, Foden came short, laid off to Fernandinho, ran forward as Fernandinho found Jesus, then received the lay-off to drive on. Jorginho and Rudiger were taken out, space was created, and Mahrez nearly found Gundogan running into the box. 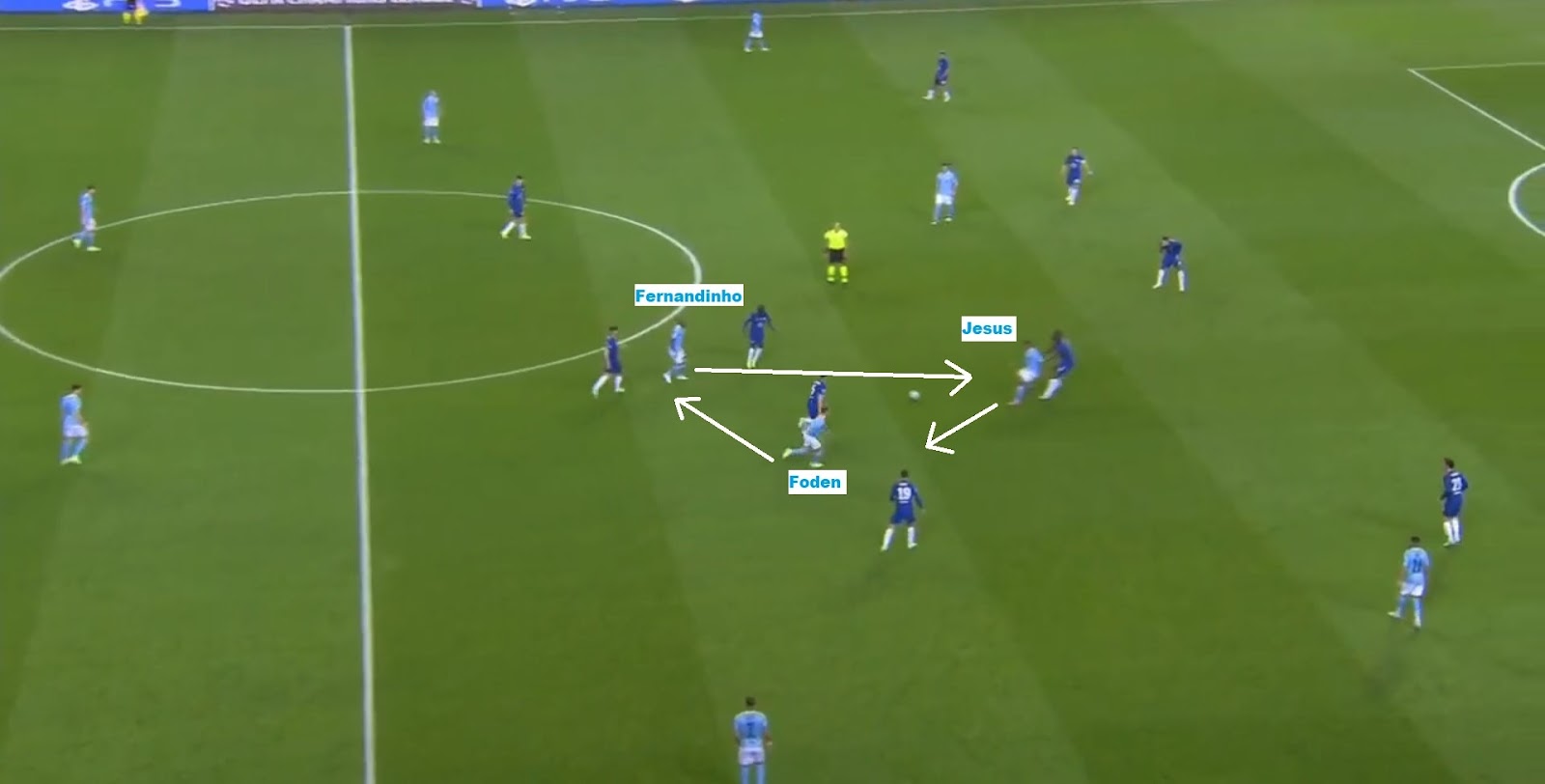 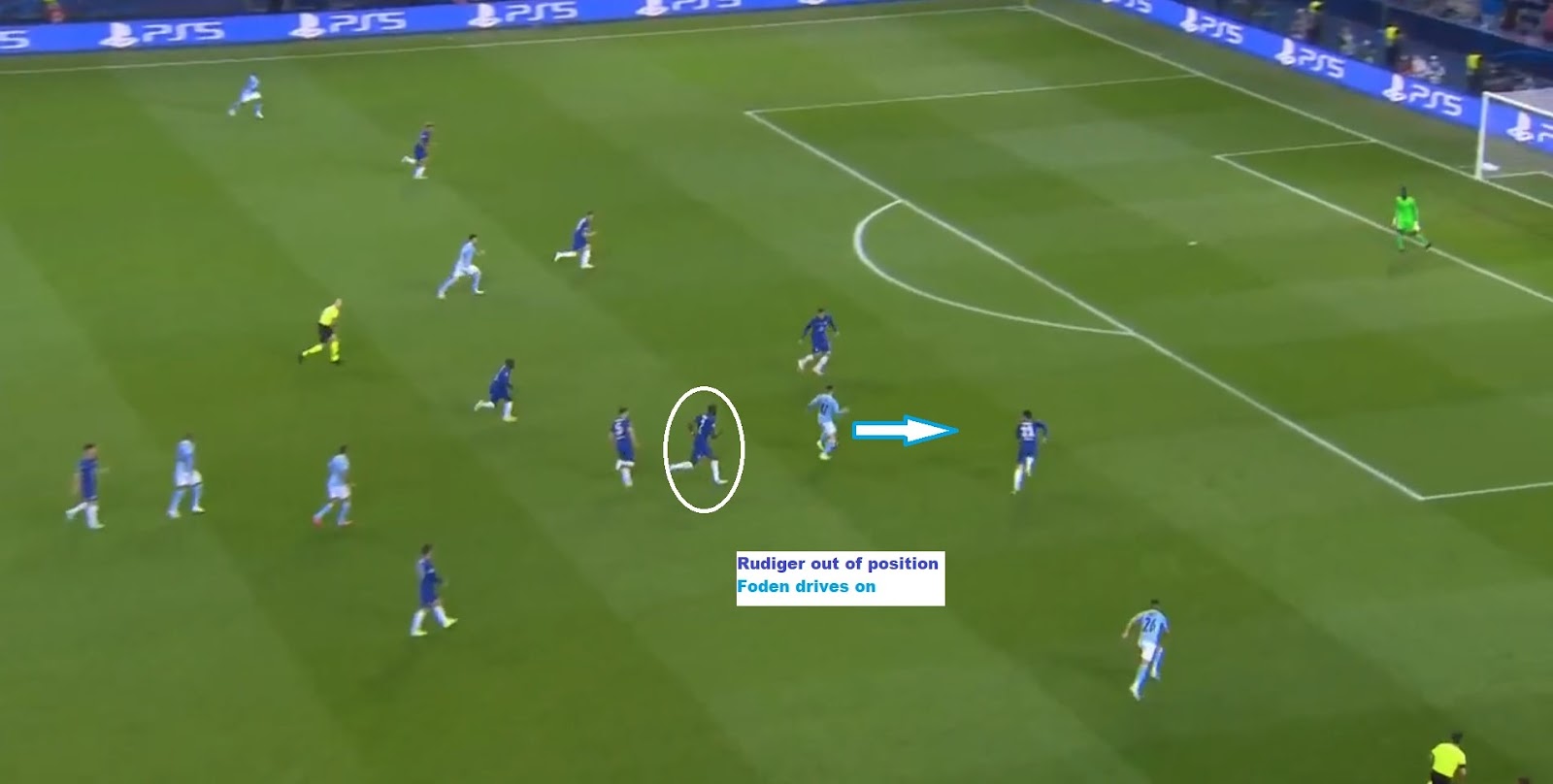 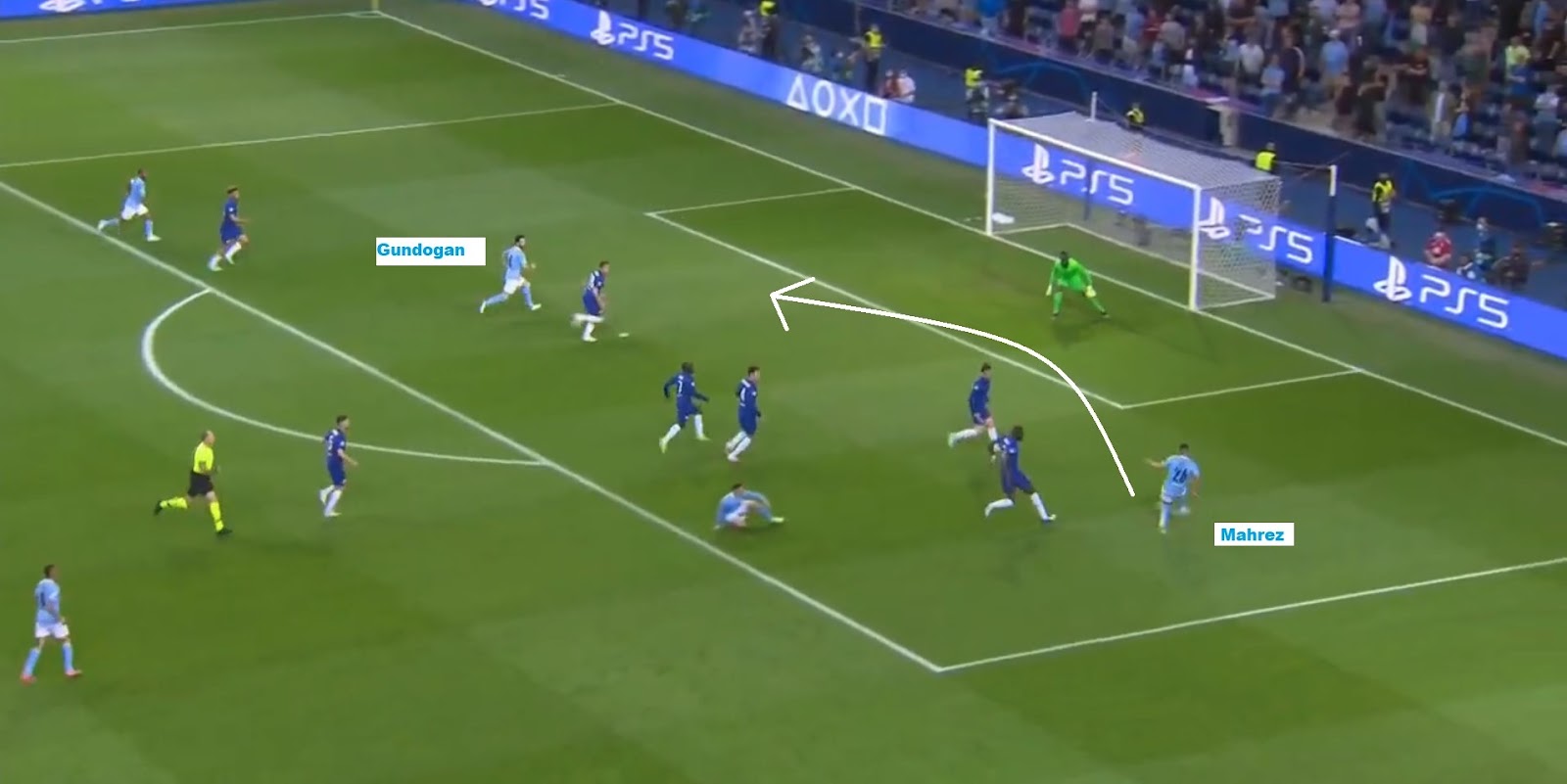 Five minutes later a similar move had a similar effect. This time Gundogan laid off for Fernandinho, taking out Azpilicueta. Sterling ran behind James into the space created in Chelsea's back line and got on a through ball from Fernandinho, but his cut-back was missed by Jesus.

The arrival of Fernandinho to midfield, the pushing up of Gundogan, and the presence of a more natural striker in Gabriel Jesus all seemed to help Manchester City. Their passing became more urgent, and there was more of a penalty box threat. This only became more prominent when Sergio Aguero came on. Chelsea made changes of their own, with Pulisic coming on for Werner to add fresh legs on counter-attacks.

Pulisic nearly sealed the win after latching onto a Havertz through ball. It wasn't to be, but City had no response of their own. Guardiola's team became more desperate and looked less and less like a Guardiola team, pumping long balls and high crosses into the box for nobody of any real aerial presence.

Chelsea defended doggedly, attacked cleverly and beat Manchester City for the third time in a row since Tuchel's arrival at Stamford Bridge. But while they got the spoils, the post-match analysis has to centre on Guardiola's decision-making. His starting selection didn't work, and his team only looked cohesive when he reverted back to a more 'normal' line-up. He also left it late to introduce Aguero, his only natural fox in the box, bringing the club legend on in the 77th minute.

Manchester City came close to the pinnacle of European competition, but didn't put their best foot forward. The same cannot be said of Chelsea. Tuchel set up in a way that suits his players, that is proven to suit his players, and it worked. He didn't get in the way of his talent. And perhaps that is the one big lesson Guardiola must learn if he is to conquer the Champions League again.