Manchester City officially re-entered Premier League title race with an assertive performance in a 3-1 win away to Chelsea, a result that put Blues boss Frank Lampard under serious pressure. City took the lead on 18 minutes through a wonderful outside-the-box strike from Ilkay Gundogan, and doubled their advantage three minutes later when Kevin De Bruyne set up Phil Foden to finish. De Bruyne then made it 3-0 just after the half-hour mark.

A late Callum Hudson-Odoi goal made the score look more respectable, but this was a humiliation for Chelsea at Stamford Bridge. Here we will look at how Manchester City ruthlessly exploited their weaknesses to secure a big win on Sunday.

Pep Guardiola set Manchester City up in a defensive 4-3-3 formation that allowed matching up man-to-man in midfield. Rather than pressing Chelsea's centre-backs, De Bruyne would block or mark N'Golo Kante, while Ilkay Gundogan and Bernardo Silva covered Mateo Kovacic and Mason Mount. Rodri, the base midfielder, was the spare man behind them to sweep up or close down when necessary.

This coverage of options made it difficult for Chelsea to play through midfield, as they were often quickly closed down and forced backwards or into a turnover. Manchester City also decided to have their wingers – Raheem Sterling and Foden – press Kurt Zouma and Thiago Silva on sideways passes, from outside to in.

City's pressing reduced the time Chelsea's central defenders had on the ball, and it also cut off the pass out to the full-backs. Consequently, a lot of Chelsea build-up was forced down the middle into high-pressure areas, where City – thanks to De Bruyne's marking of Kante – essentially had an extra man.

We see an example of Manchester City's approach in the following sequence of images. Firstly, we see De Bruyne standing in front of Kante to block him. Meanwhile, Sterling steps up to close down Thiago Silva, who is receiving facing his own goal. 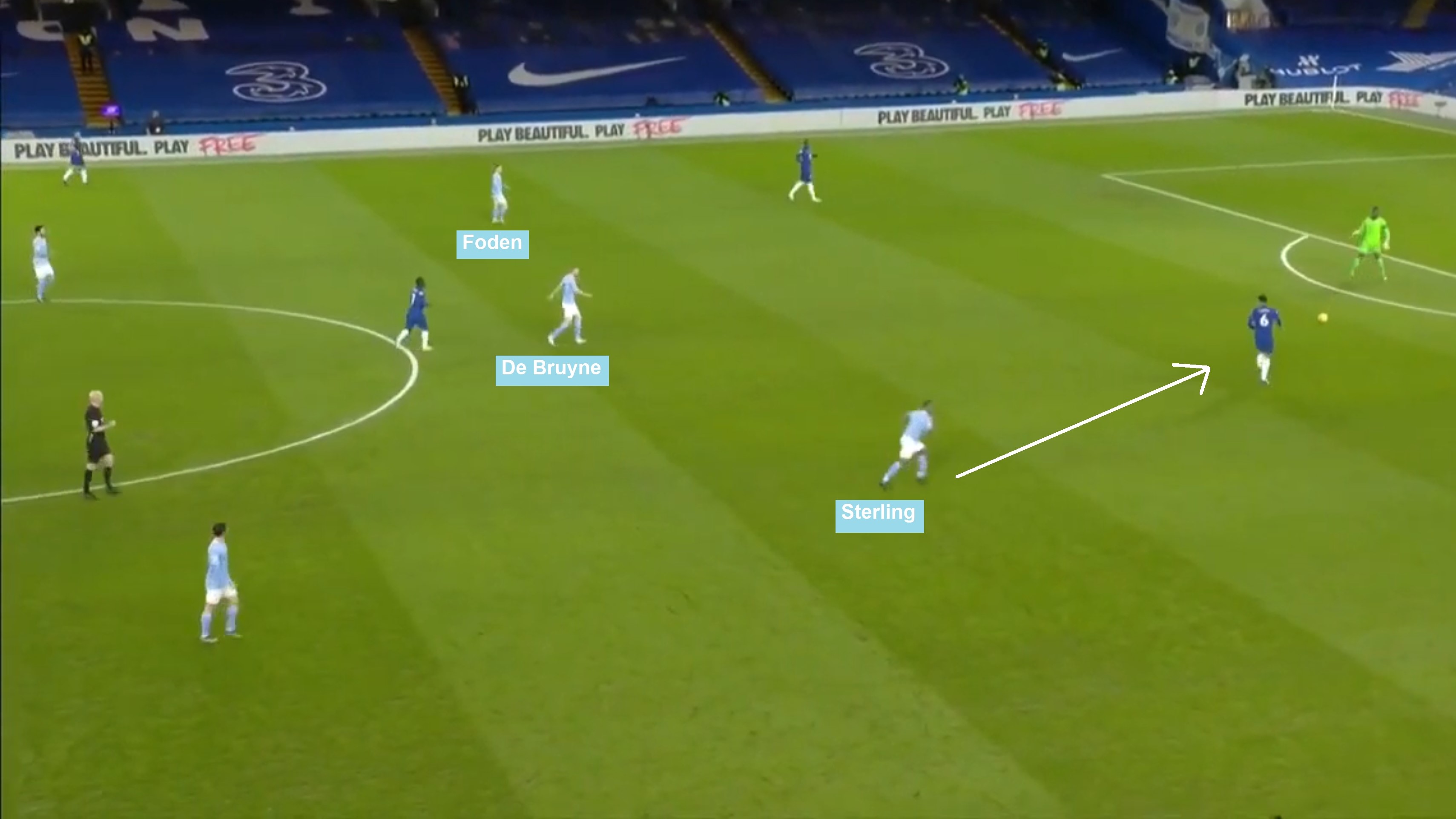 With Kante covered and no other available options, Silva is forced into a sideways pass to Zouma. This was probably the least risky decision considering how Silva received the ball (back to goal, partially blind to Sterling's pressure). But the pass only invites Foden to press Zouma in the exact same way. 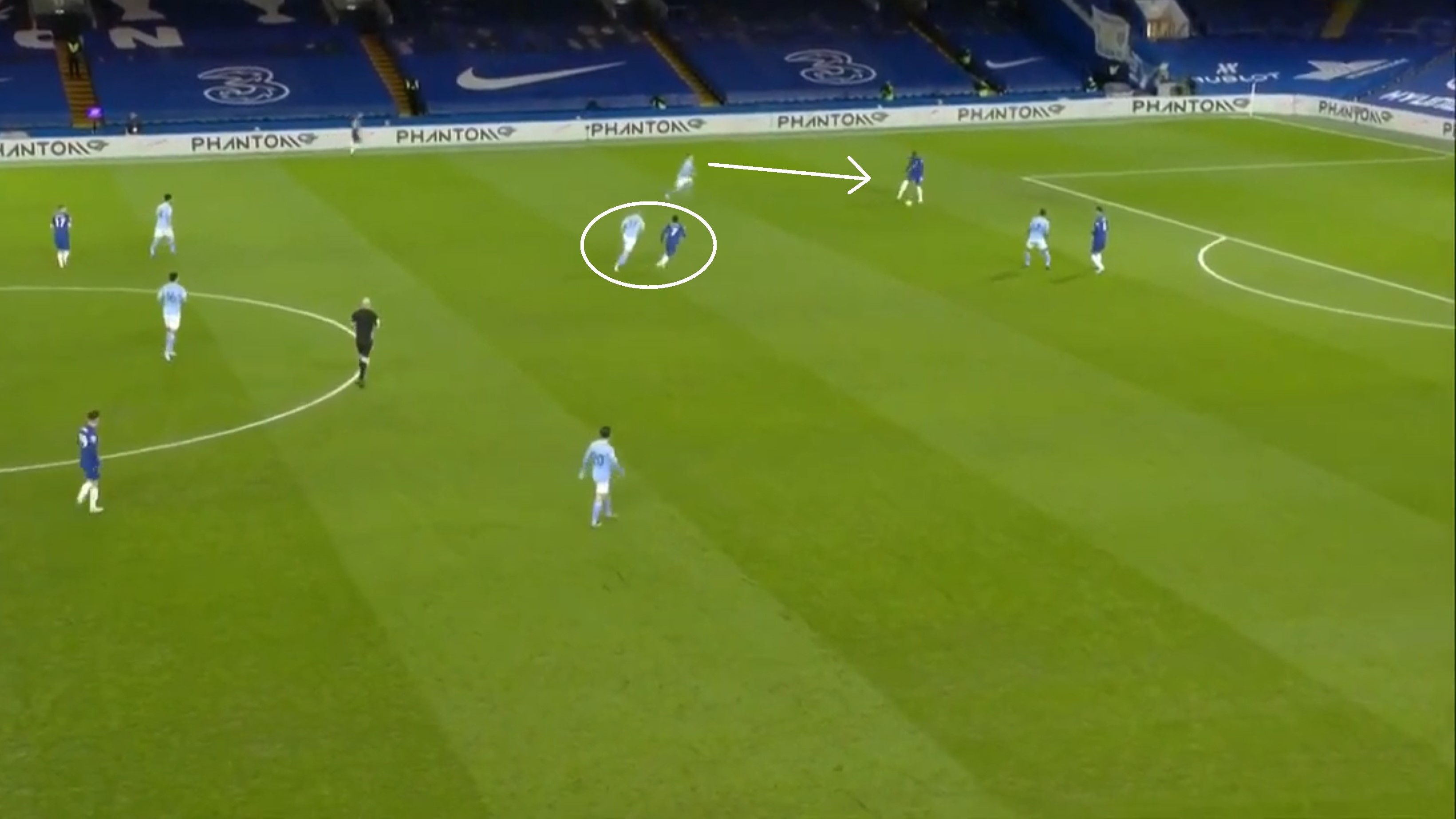 Chelsea escaped this situation with Zouma dribbling and being fouled, but it was risky stuff and a sign of things to come. On other occasions they were forced to be more direct (ineffectively) or coughed up the ball deep inside their own half.

Even when Chelsea were able to retain and advance up the pitch, the quality of their passing let them down. Sometimes it was a case of two teammates being on different wavelengths; sometimes it was simply poor execution. All of this meant attacks broke down far too easily, and Manchester City had lots of opportunities to counter at speed through De Bruyne and Sterling.

Without doubt the most obvious example of this came on 34 minutes, when a Chelsea free kick led to City's third goal. The kick was easily cleared, and Kante – Chelsea's last man – had a sloppy pass cut out by De Bruyne, whose header put Sterling in on goal.

Unlike Manchester City, Chelsea's front three were unable to get effective pressure on the ball. Timo Werner, Hakim Ziyech and Christian Pulisic were quite narrow, but lacked intensity in stepping up to press City's centre-backs. Nobody was focused on marking Rodri, who was frequently left free to receive and play forward.

At the same time, Chelsea's midfield three of Kovacic, Kante and Mount were consistently easily penetrated, with a complete lack of organisation evident within the trio. Both of City's first two goals originated from abysmal defending from the home side.

Here we see the build-up to the first goal. Rodri is completely free to receive the ball. Chelsea aren't playing with a No.10 to naturally get close to him, Mount and Kovacic are focused on Silva and Gundogan, while Werner is in no position to block City's defensive midfielder. 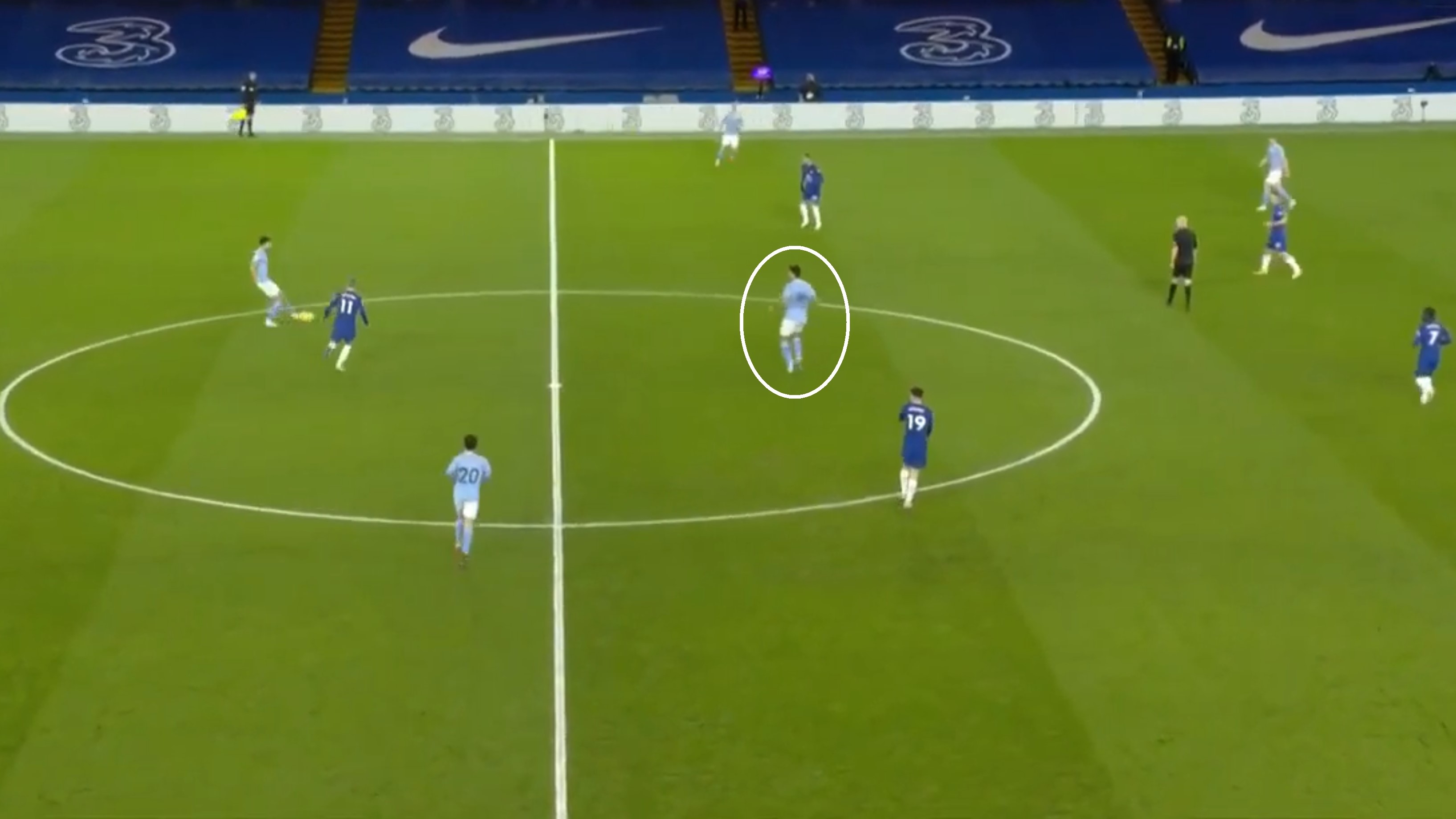 Kante ends up closing down Rodri as the Spaniard drives forward, but this leaves a hole between Chelsea's midfield and defence. Neither Mount nor Kovacic are interested in the space opening between the lines, leaving Gundogan and Foden in acres to receive the pass inside from Oleksandr Zinchenko. 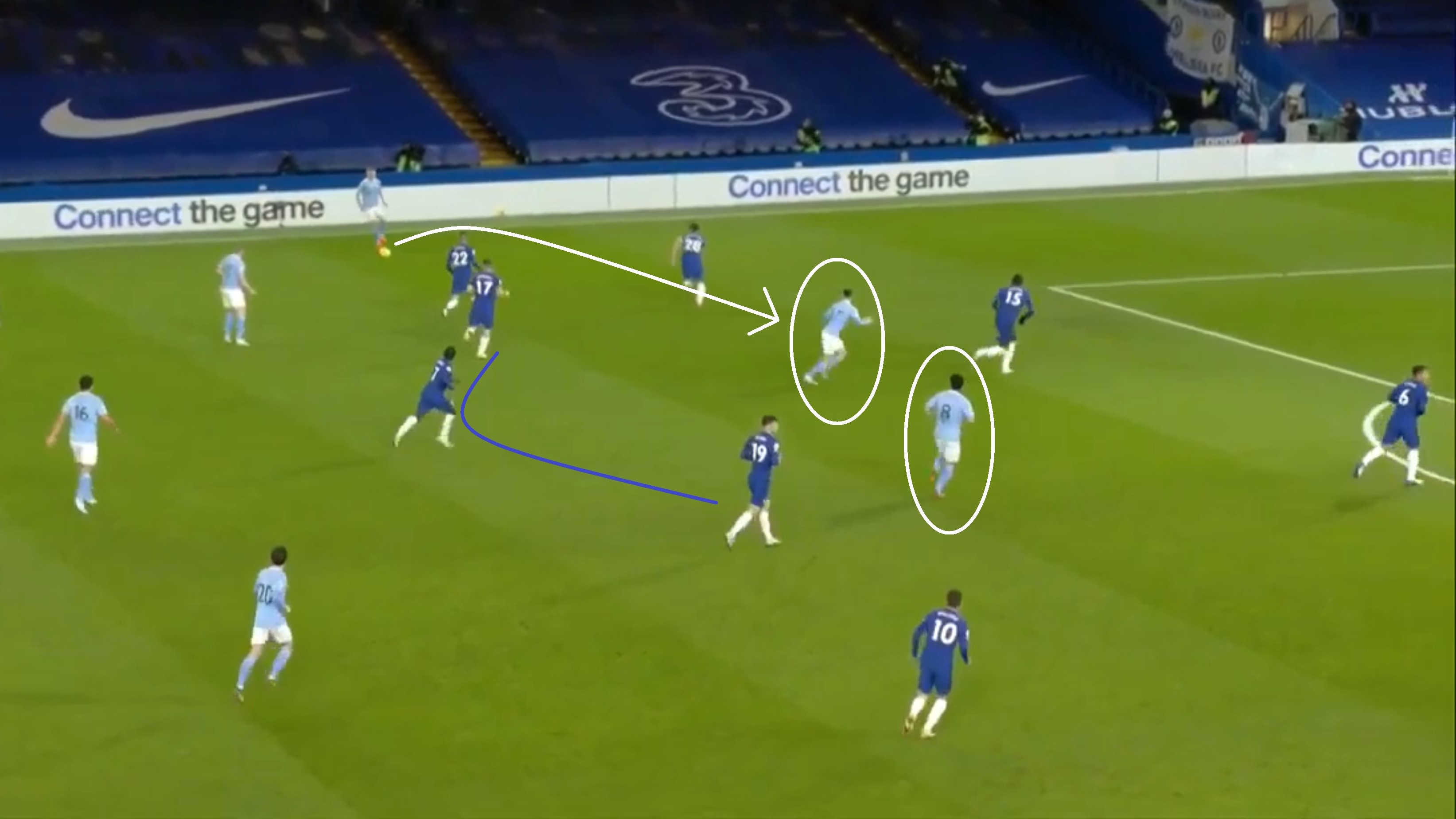 An almost identical sequence led to Manchester City's second. Again City work the ball wide left to Zinchenko (Ziyech is nowhere near him, so Kovacic goes out to close him down). But De Bruyne is left in huge space between Chelsea's midfield and defence to receive the ball inside from Zinchenko. From here the Belgian drives forward and goes on to set up Foden to score. 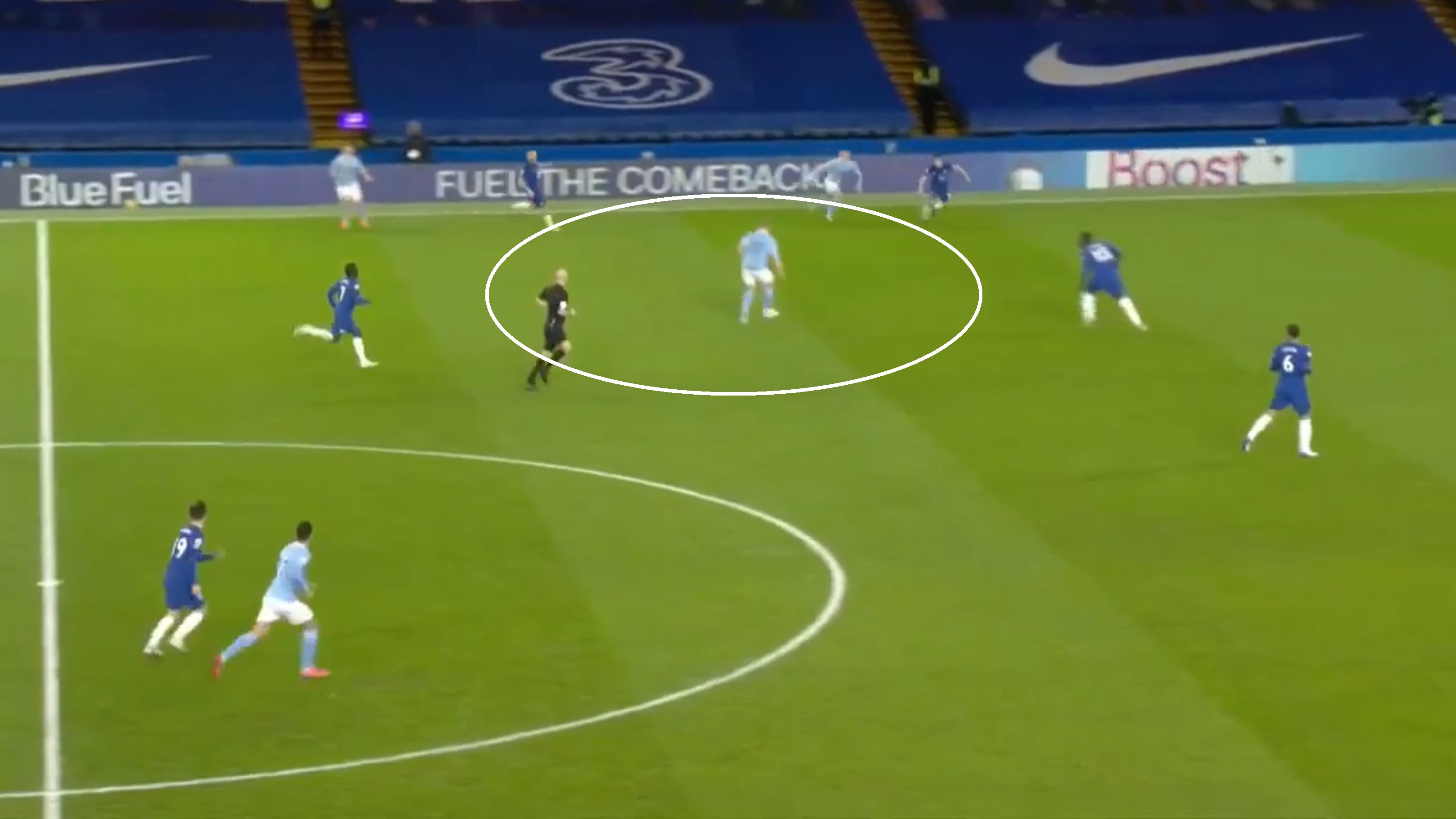 Giving a player of De Bruyne's quality this much room to manoeuvre is a footballing sin, but it happened constantly on Sunday. Chelsea's centre-backs didn't go to him, perhaps scared to leave a gap behind them, while the midfield three got nowhere near him. Sterling caused similar problems, finding big pockets to receive through balls, turn and go at Chelsea's defence.

Perhaps the most chastening aspect of this game for Chelsea was that Manchester City didn't do anything incredible to seal such a wide margin of victory. Pep Guardiola set his side up well to press, but City also benefitted from sloppy passing and non-existent pressing from their hosts.

Too easy to close down and open up, Lampard's Chelsea were nowhere near the level required last Sunday. Right now, even in a wide-open Premier League title race where first place is up for grabs, they look closer to finishing in mid-table.