Manchester United crashed out of the FA Cup at the quarter-final stage on Sunday, losing 3-1 to Leicester City. The result leaves them with just one realistic chance of a trophy this season – the Europa League. Here we will analyse the game, focusing on two major tactical issues for United that helped to shape the outcome.

PROBLEMS WITH THE DIAMOND

Leicester set up in a defensive 5-3-2 with Ayoze Perez joining Youri Tielemans and Wilfried Ndidi in midfield. Up front, Kelechi Iheanacho partnered Jamie Vardy in a strike partnership that was responsible firstly for blocking passes through the centre of midfield and secondly for stepping up and pressing Manchester United's centre-backs when an opportunity appeared.

United struggled to play out against this defensive setup, though this was as much about their own shortcomings in possession as it was about Leicester's pressing.

Ole Gunnar Solskjaer decided on a 4-4-2 diamond, with Mason Greenwood joining Anthony Martial in the front two and Donny van de Beek supporting them. Nemanja Matic was the holding midfielder, with Paul Pogba and Fred either side of him. With a diamond midfield comes a lack of natural width, as there are no wingers in the line-up. Consequently, width needs to be provided by movements within the system – i.e. the strikers pulling wide, or the nearest midfielder.

Manchester United are a team that likes to build possession through the wider areas. Bruno Fernandes plays a part in this usually, pulling out to the sides to receive away from midfield pressure and try diagonals or connecting with the forwards. But he was absent here, and his replacement Van de Beek didn't impose himself on the game.

Only two Premier League teams (Aston Villa and Crystal Palace) focus more on the attacking down the left side than United – 43 per cent of their attacks come down this flank. But without the varied forward runs of Luke Shaw, the dribbling and close control of Marcus Rashford and Fernandes' movement towards the wing, United were not able combine their way down the left flank as they normally would, with the Alex Telles-Paul Pogba relationship proving nowhere near as fruitful.

Here is an early example of this, from the fourth minute of the game. Harry Maguire passes to Telles. Tielemans uses the distance of the pass and the time it takes to reach the target as a trigger to press the ball. 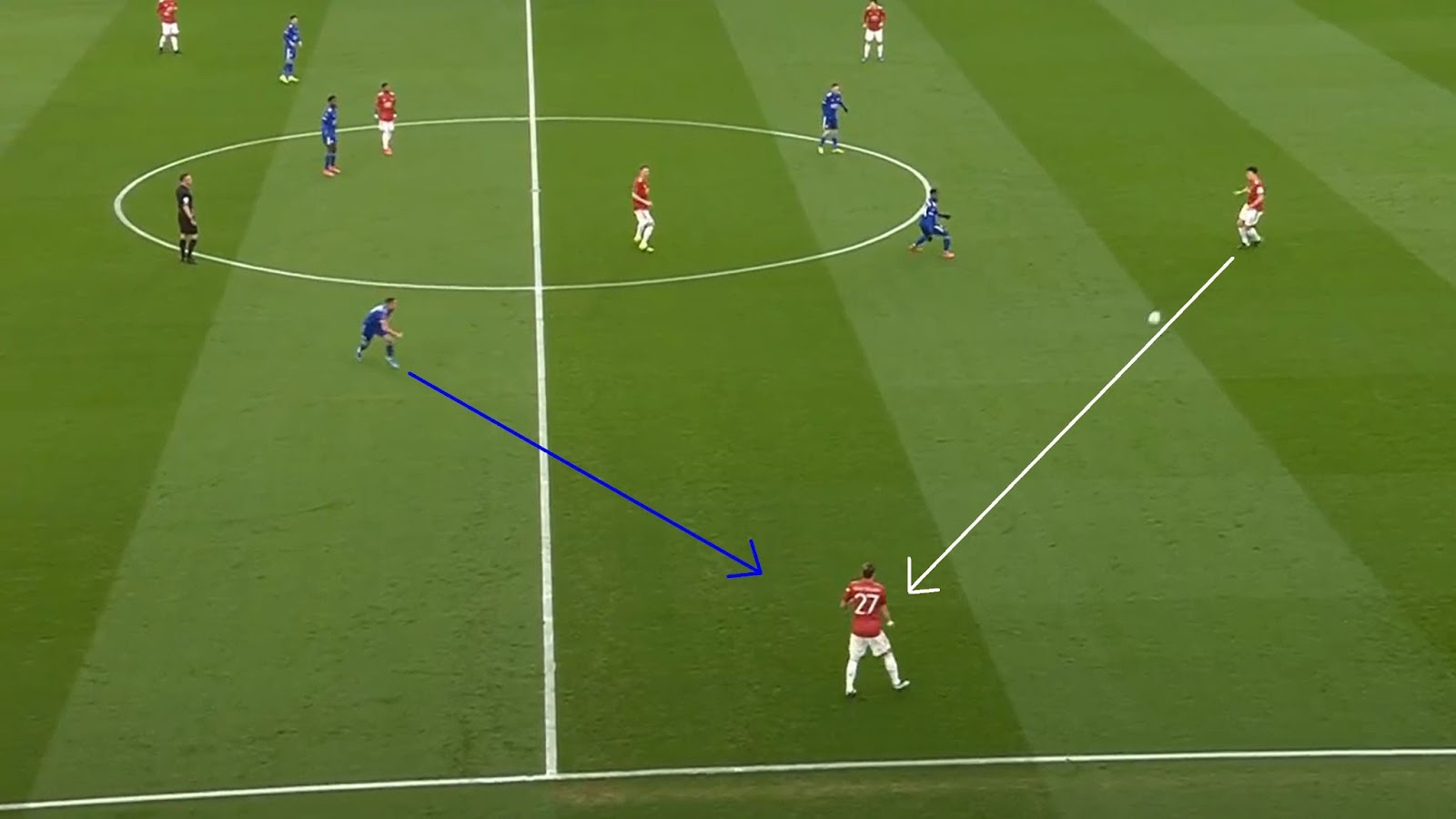 Telles ends up with no time to pick his pass, but he also lacks any kind of support whatsoever from the front four. Van de Beek is on the other side of the pitch; Pogba and Martial are out of shot. He has to go long down the line and United lose possession. 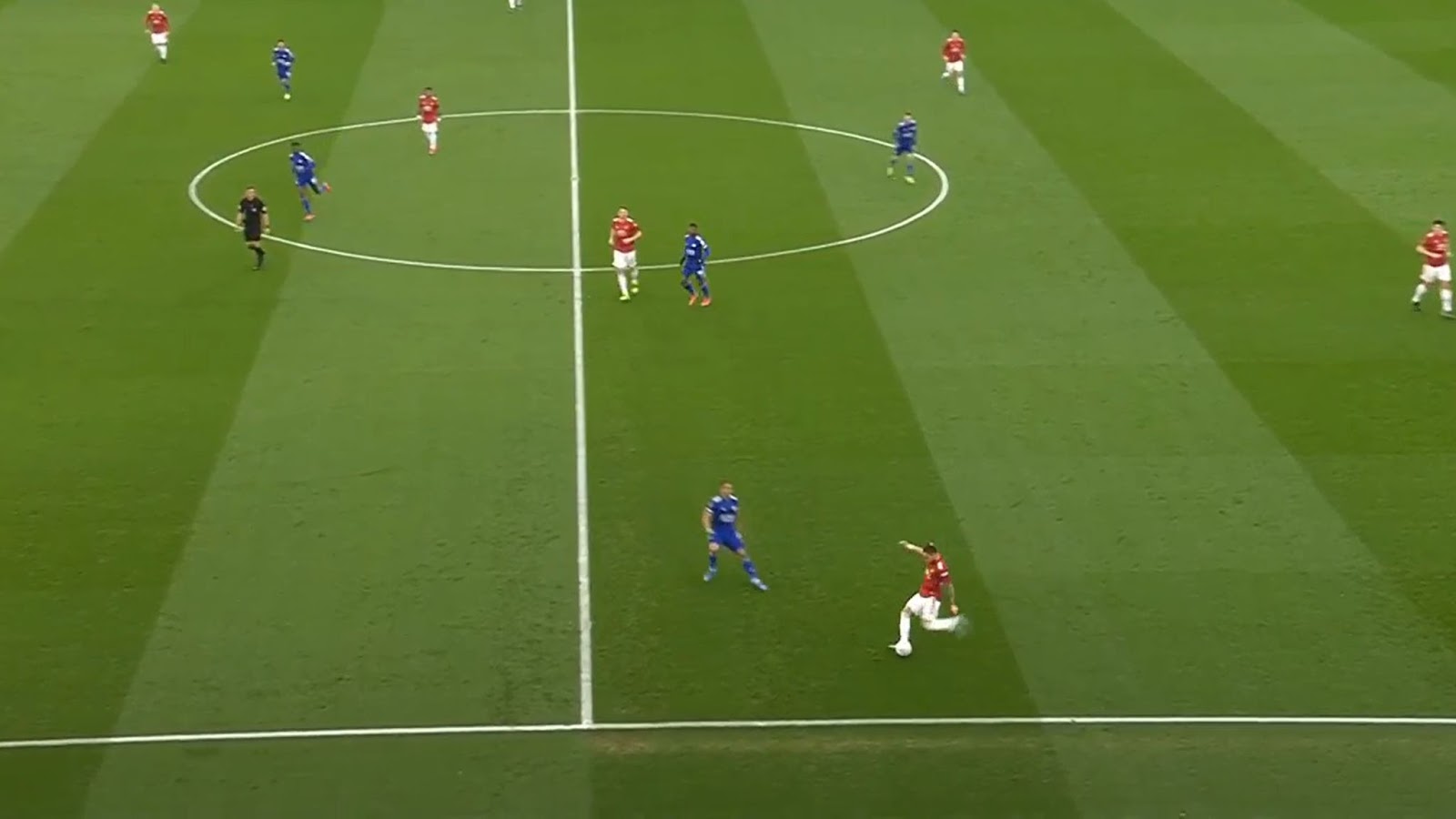 Unable to build play down the left side as they usually do, a lot of United's passing was crowbarred riskily through the middle into areas where Leicester had numbers – what with their two strikers, three central midfielders and three centre-backs. It became clear early on that Solskjaer's men weren't particularly comfortable playing in this way, and struggled when not given time on the ball.

There were a number of poor passes – under-hit passes that barely found the target, or didn't, and inaccurate passes that resulted in dangerous turnovers. Not only did United fail to find the likes of Van de Beek, Greenwood and Martial and get into the final third, but they gave Leicester counter-attacking opportunities. The most obvious example came in the 24th minute. 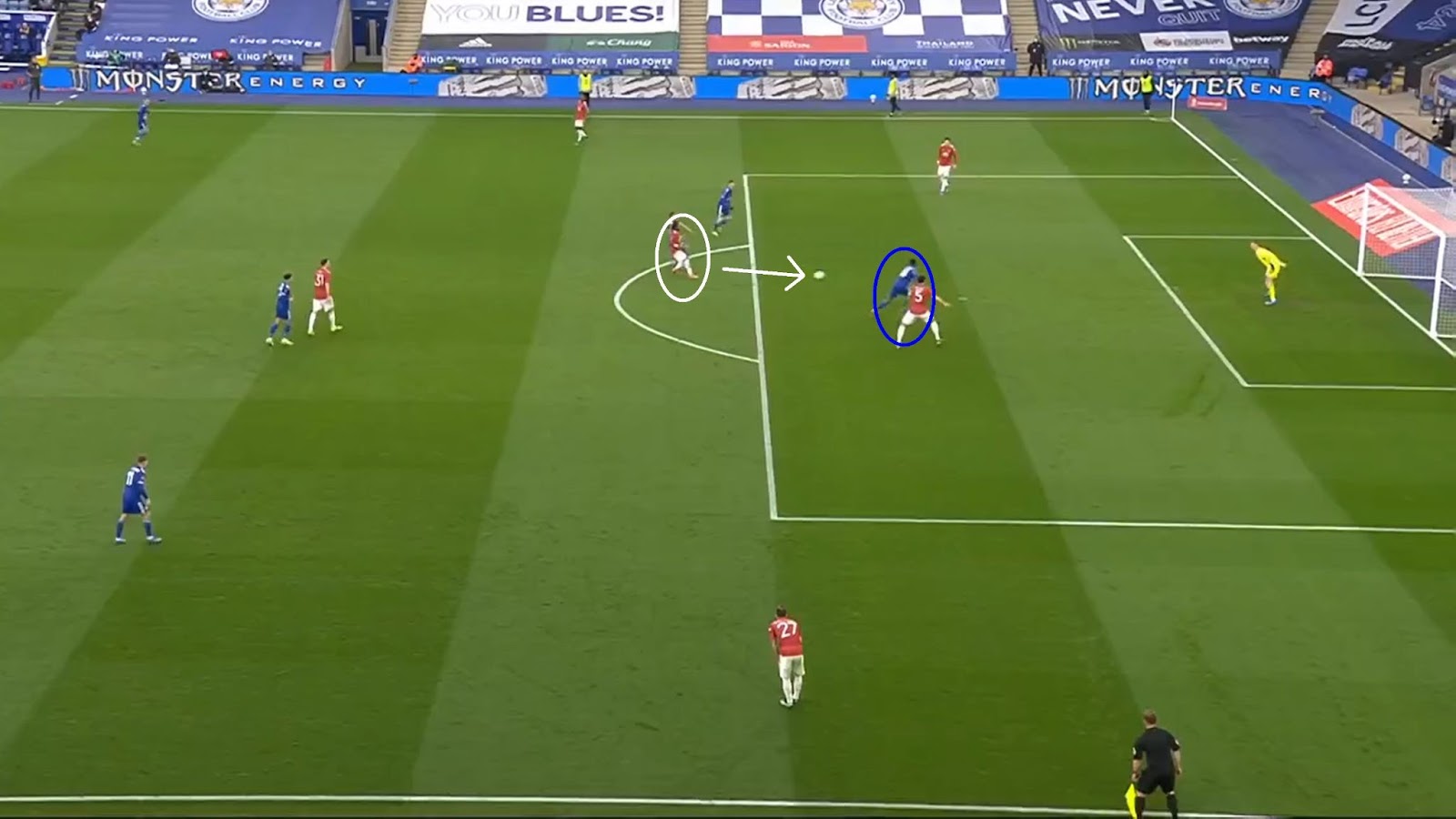 Above we see Fred giving the ball away to Iheanacho in United's own penalty box. It's an easy scoring chance which Iheanacho takes, but it all came from the discomfort of United's centre-backs and base midfielders playing under pressure.

TIELEMANS GETS TIME AND SPACE

Manchester United's defensive setup was a 4-3-1-2 with Van de Beek marking Ndidi while Martial and Greenwood stayed narrow before pressing the Leicester centre-backs on sideways passes. However, another recurring issue with United's play is poor pressing – whether it be a lack of intensity or a lack of organisation to block passes – and this was evident again on Sunday afternoon.

Leicester's shape saw Ndidi play a fixed role in front of the central defenders, but Tielemans was freer in his movements, interpreting the game to make angles for the centre-backs and looking for space to get on the ball. Once he got on it in space, he often looked for the runs of the strikers, playing long balls over the top to try and release Vardy and Iheanacho in behind United's last line.

The following sequence shows an example of how United failed to prevent Tielemans, Leicester's main playmaker, from getting on the ball and dictating his team's possession. We see Van de Beek staying close to Ndidi while Martial puts pressure on Jonny Evans. But Martial fails to angle his pressing run to block the pass into Tielemans. 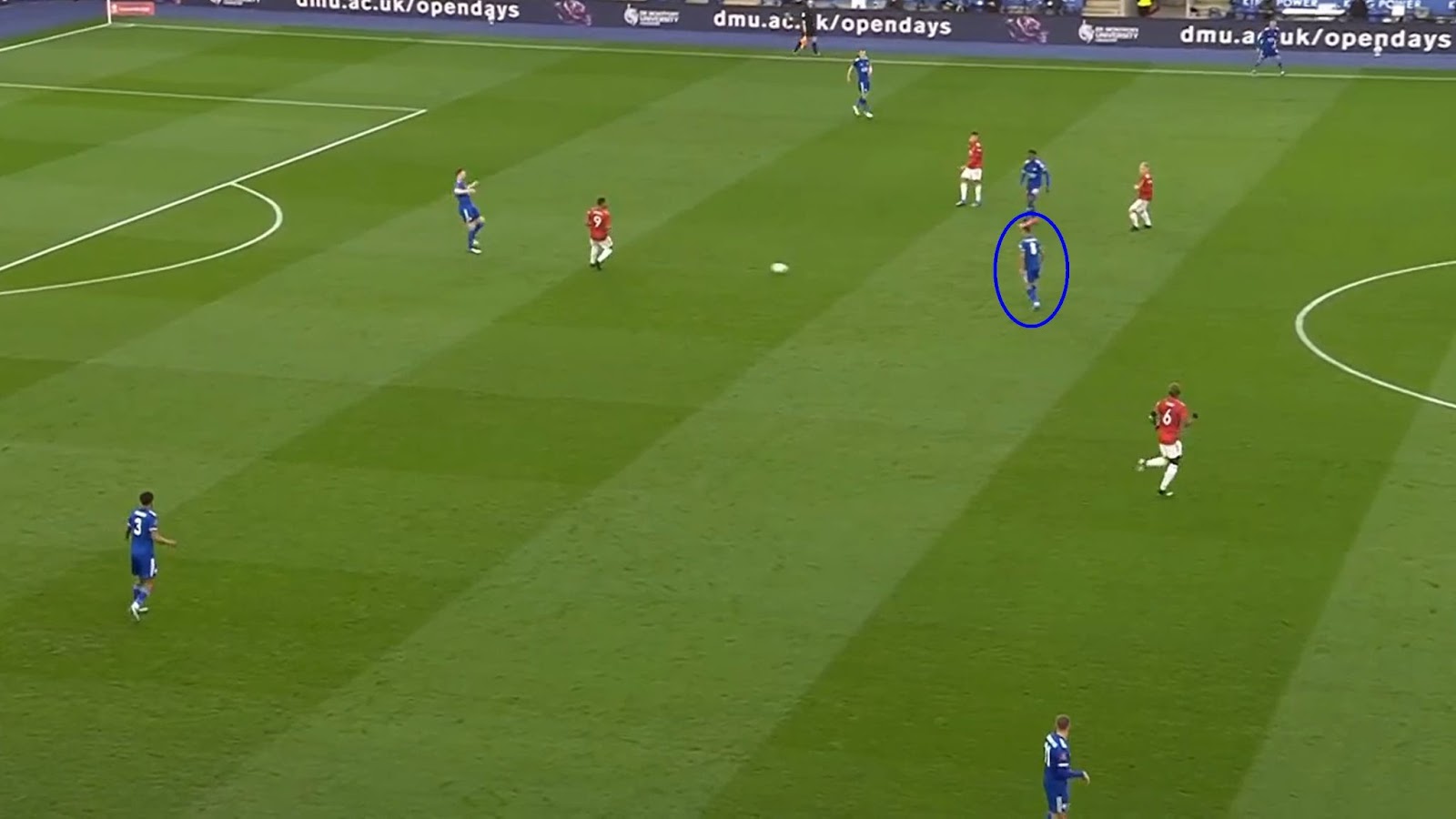 With no Manchester United player near him or trying to close him down, Tielemans is then able to turn to face play, look up to assess his options, then play the long ball over the top. 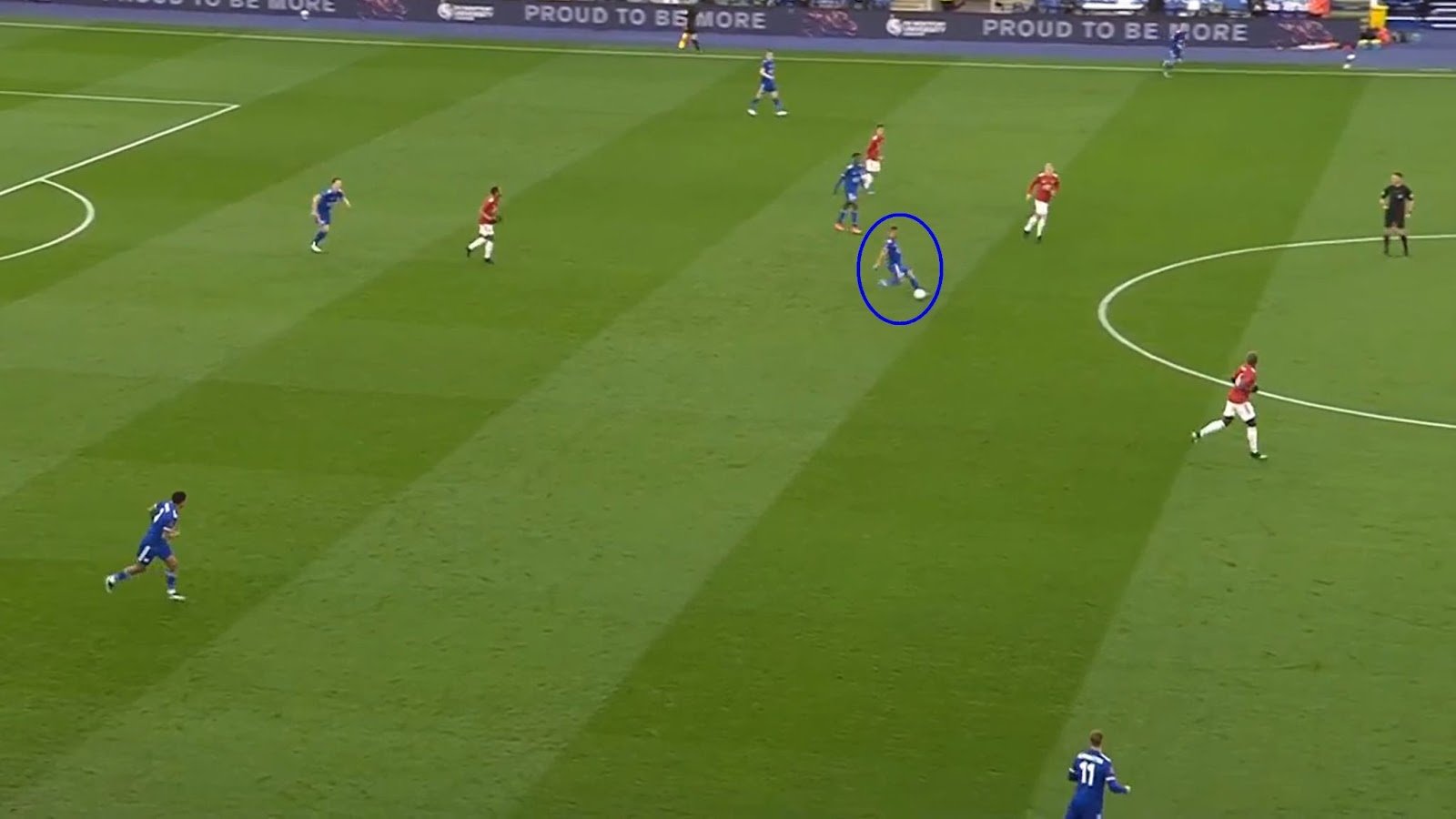 This was a warning sign that United didn't heed, and seven minutes into the second half they once again failed to stop Tielemans from getting on the ball with the time and space to play forward and open up the game.

Leicester switched from one outside back to the other, and the change of angle opened up a pass from Wesley Fofana into Tielemans. Martial didn't press or block this pass, and Matic was too slow to react and step up to close Tielemans down. 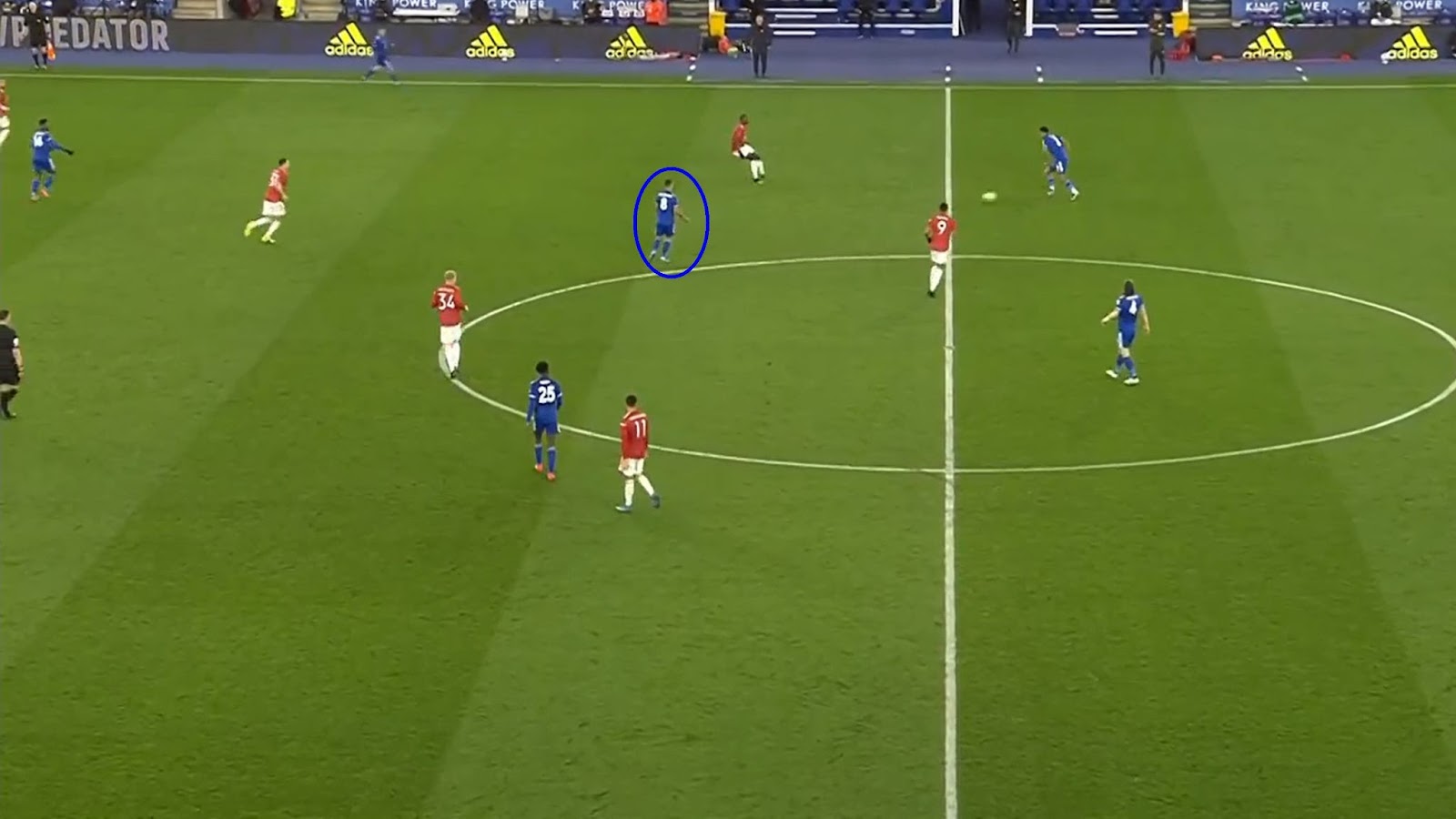 This meant Tielemans had enough time to assess and find Iheanacho, who had dropped off the frontline to receive. Maguire didn't track Iheanacho and the distance between the two was far too great for him to cover, so Tielemans could play the one-two with Iheanacho, take out the slow-on-the-turn Matic, and drive into space with United's back line one centre-back short. 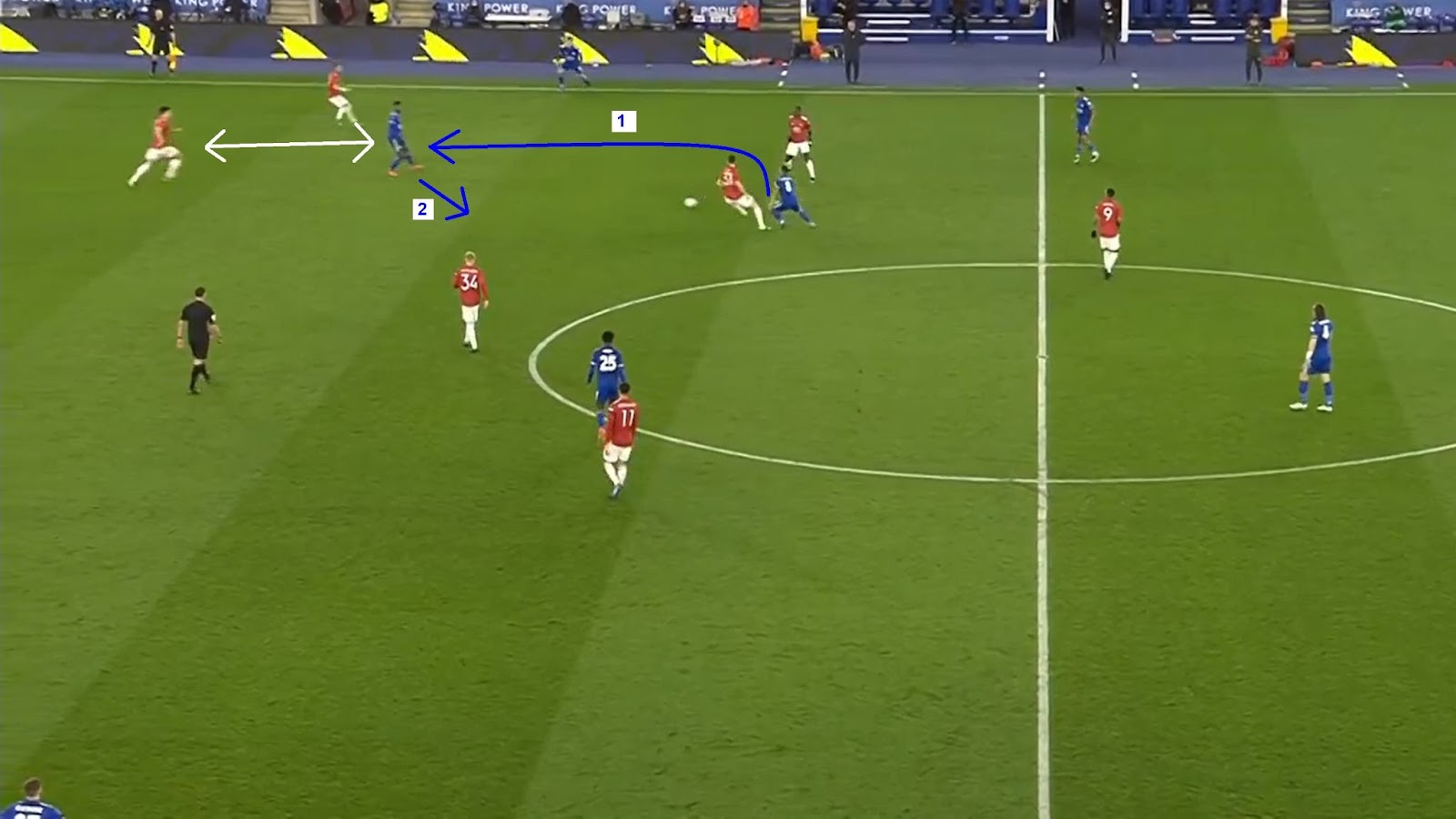 From there the Belgian would score with a well-placed shot from just inside the penalty box. It was a classic example of how United's lack of intensity and organisation in pressing allowed a team to play through them and create a scoring opportunity.

Manchester United had their moments but poor build-up and pressing led to them conceding twice. Once they went 2-1 down they made substitutions but were unable to change the course of the game, as Leicester sealed the win with a straightforward Iheanacho header from a free kick.