The first round of Euro 2020 group stage fixtures wrapped up in fitting style on Tuesday evening as France and Germany, winners of the last two World Cups, met one another in a clash of contenders. Germany put in a good showing, suggesting they may not be as chaotically out of form as some suggested, but it wasn't enough to deny France. A Mats Hummels own goal, forced by a dangerous Lucas Hernandez cross in the 20th minute, was enough to seal a French win. Here's how it happened.

France set up in a 4-3-3, abandoning the diamond shape they had used in pre-tournament warm-up friendlies for a flatter, more fluid frontline. Karim Benzema, Kylian Mbappe and Antoine Griezmann all interchanged positions, albeit with Mbappe leading on counter-attacks. Behind them, Paul Pogba joined N'Golo Kante and Adrien Rabiot, with the back four as expected: Benjamin Pavard and Lucas Hernandez outside of Raphael Varane and Presnel Kimpembe.

Germany stuck to the pre-tournament expectation of a back five. Joshua Kimmich filled in on the right, with Robin Gosens on the left. Mats Hummels led the central defence with Mathias Ginter and Antonio Rudiger either side of him. The midfield and frontline fluctuated throughout the match, meaning Germany defended in a 5-3-2 or a 5-2-3. Kai Havertz was the difference. Sometimes he was in midfield alongside Toni Kroos and Ilkay Gundogan; at other times he defended from the front with Thomas Muller and Serge Gnabry. 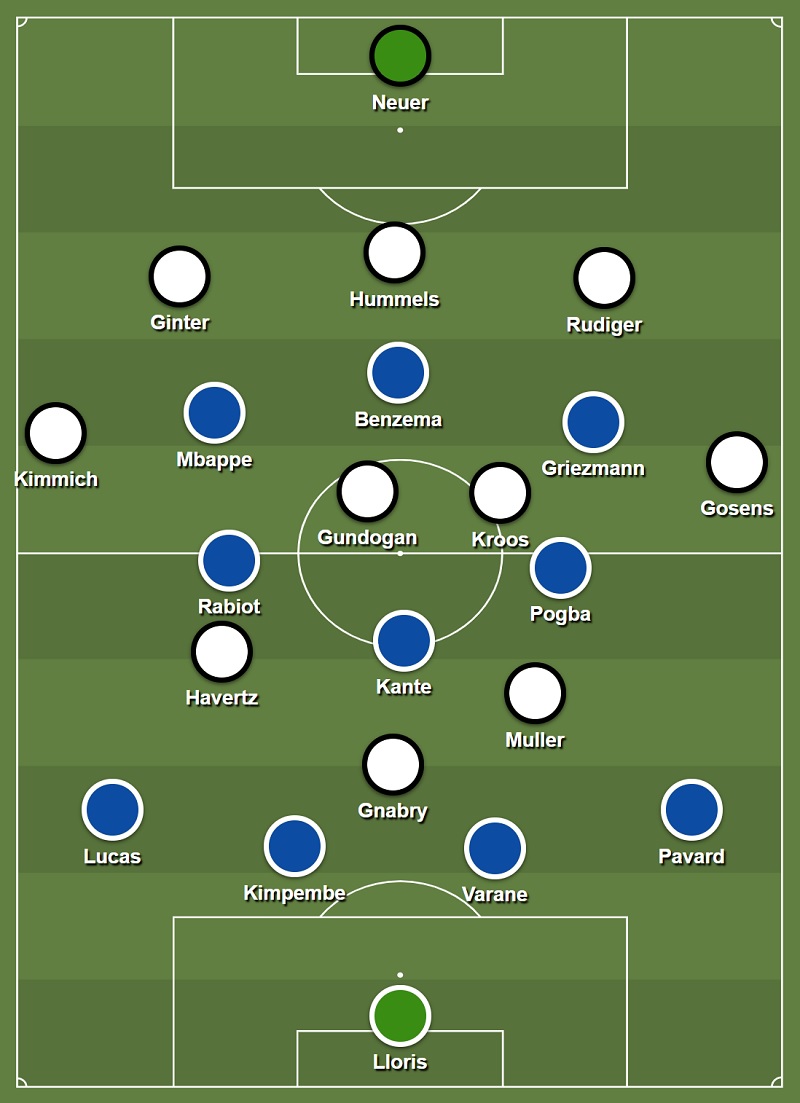 Germany were very structured in their attacking play and mostly dominated the ball. This was the case even before France took the lead. In the first 20 minutes, the possession share was 58% to 42% in Germany's favour. Obviously the challenge was to make that extra time on the ball count against a strong French defence. And while Germany were able to find space between and behind, they failed to take advantage of it.

The attacking front three of Muller, Gnabry and Havertz caused a dilemma for France's centre-backs. Sometimes two of Germany's front three would stay high, occupying Varane and Kimpembe. This prevented them from going with Havertz when he roamed to find pockets of space and make himself available between the lines. 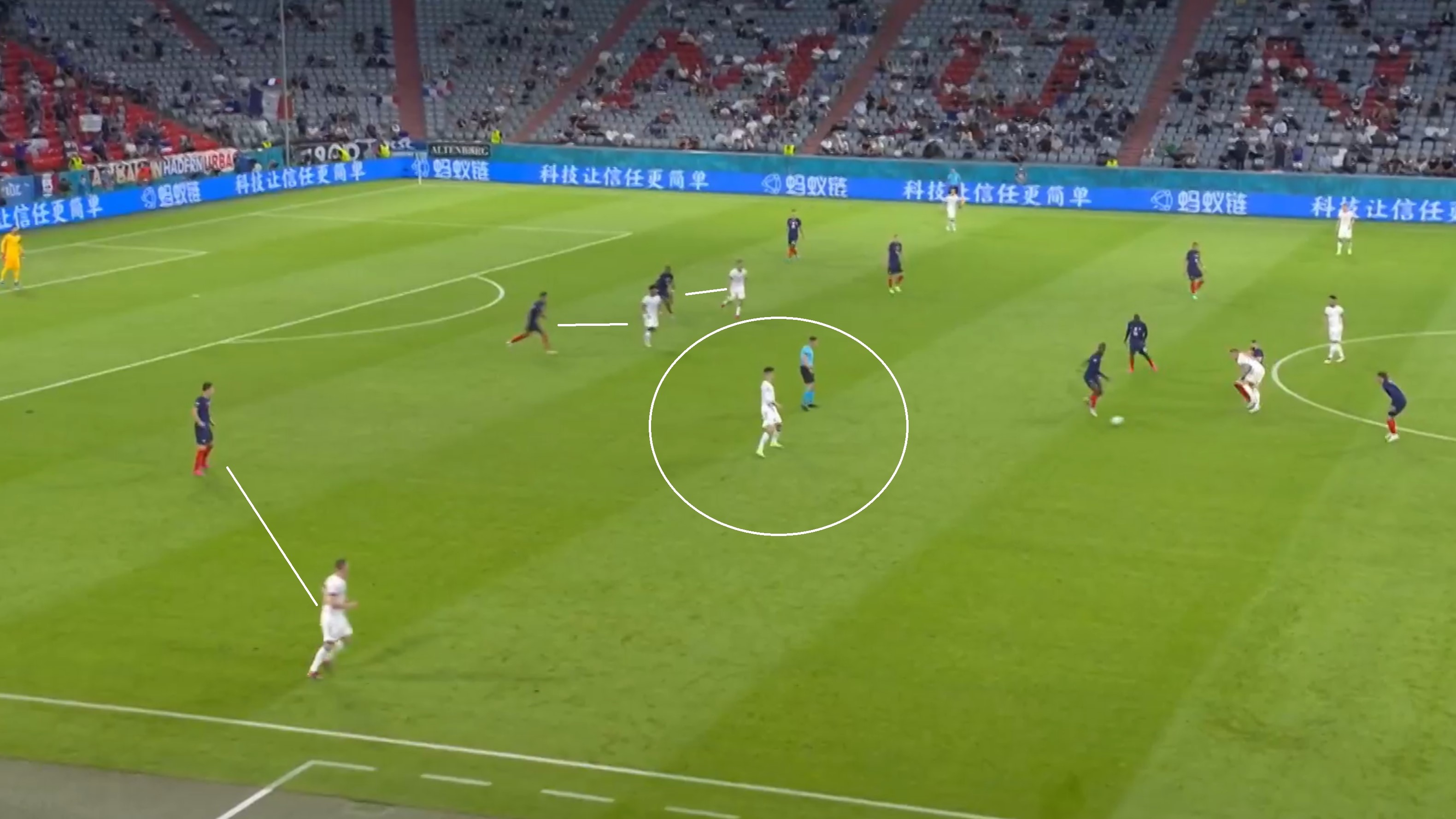 At other times, the attackers would move along the last line, dragging a French centre-back out of position and making space for someone else to run in behind. Muller was particularly effective at this, taking Varane away from Kimpembe several times in the first half-hour and opening up the centre-back channel for Kroos or Havertz to run in behind. 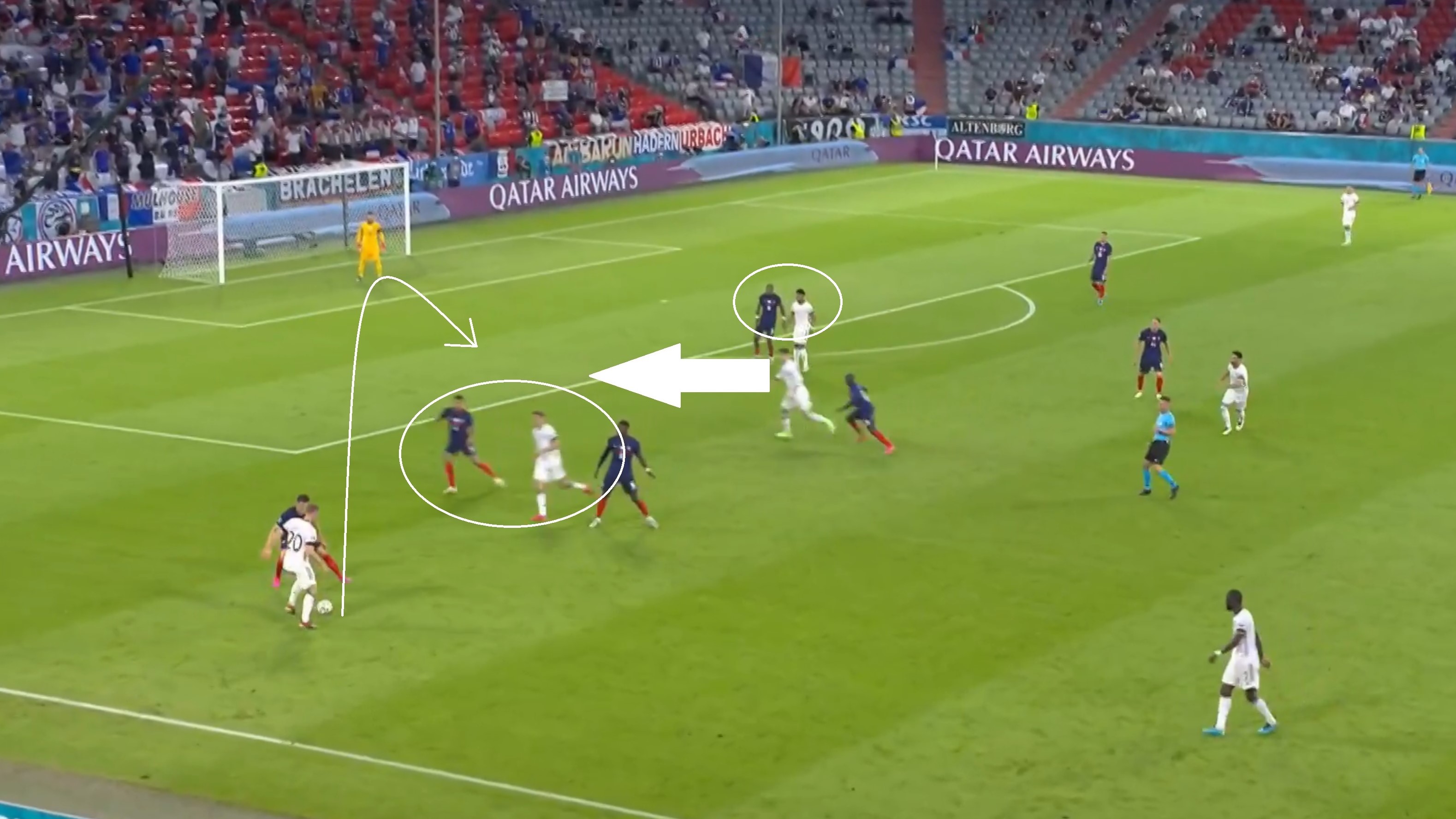 Unfortunately, for all Germany's structure and movement, there was a lack of end product. The run behind wasn't always spotted, or the first touch let them down, or the execution and choice of pass was poor. Germany broke through France's midfield and entered the final third plenty of times, but rarely did they turn the attack into a serious attempt on goal.

The wing-backs' presence, or lack thereof, didn't help. Kimmich and Gosens offered very little until the last half-hour, when Kimmich started to influence the game with runs to the by-line and some dangerous crosses into the box from the right wing. But still there was a lack of spark in the final third. Havertz, Muller and Gnabry threatened with their movement and pace, but were limited when it came to dribbling, creative passing or incisive shooting.

In short, Germany had lots of structured possession, and broke the lines a number of times, but couldn't create scoring opportunities against a solid French defensive line.

Germany were not helped at all by the fact that France took the lead. The French are superb frontrunners. Once they take the lead, they are capable of shutting the game down almost entirely, even with plenty of time left on the clock. Once Hummels put the ball in his own net, the game dynamic changed. All of a sudden, the onus was on Germany to attack. France could defend and counter, and that brought the best out of Mbappe with his lightning speed and 1-versus-1 ability.

The more the match went on at 1-0 to France, the more Germany were allowed to dominate the ball by default. France sat deeper and deeper, until they were officially in a low block. Incredible defensive shifts were put in by Benzema and Griezmann, both of whom tracked back well into their own half to help their team win the ball and start the counter. 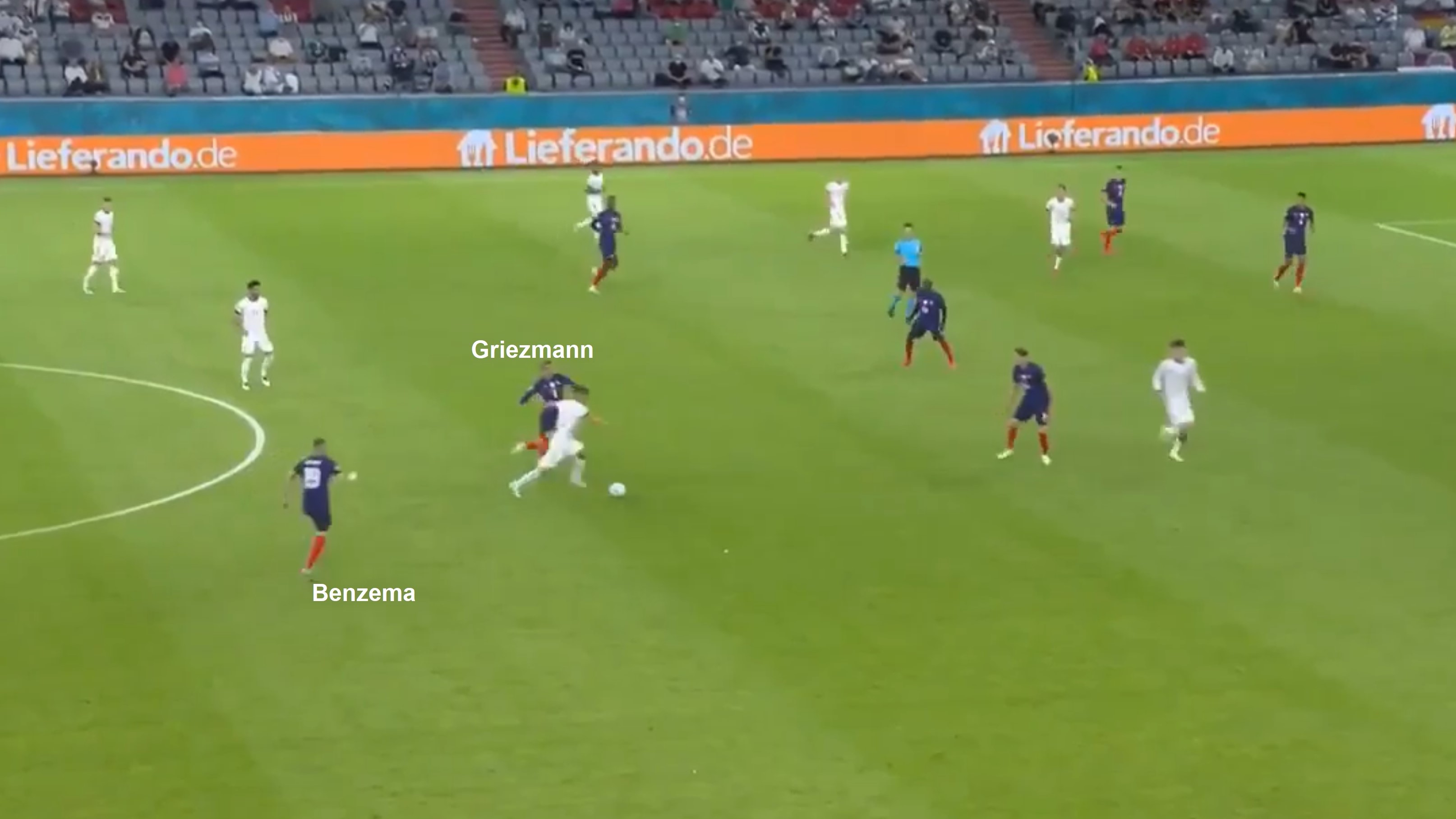 Germany's decision to go with a back three paid dividends here. Without a single ball-winner, never mind one of Kante's calibre, and with Kimmich shunted to the right-hand side, they are simply too open through midfield. They also didn't press the ball in transition with any real intensity here. Consequently, France were able to combine their way through quite easily, showing some nice one- and two-touch play in the process. But at a certain point they came face to face with three German defenders in Ginter, Hummels and Rudiger.

While Mbappe got isolated with Hummels on a couple of occasions, generally Germany's back three ensured they had enough cover back to stymie the counter and slow it down, if not halt it completely. 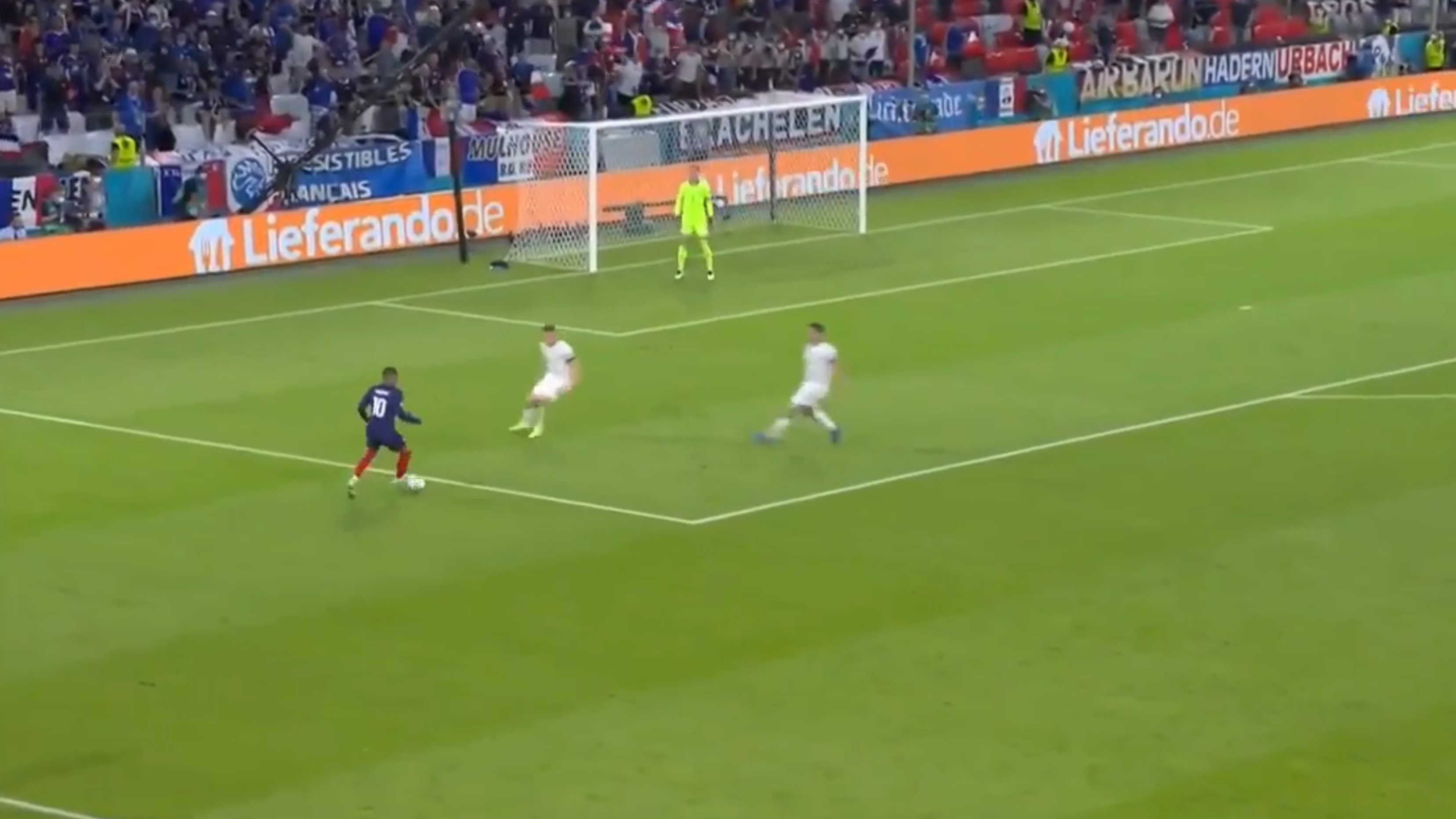 France's taking the lead, and Germany's subsequent inability to break down their low block, was perhaps the main takeaway. The sub-heading underneath that headline would be France's counter-attacking, and the battle between Mbappe and Germany's defenders. But a few key sentences must be dedicated to Paul Pogba.

The Manchester United man was exceptional. His close control and dribbling skill helped to bypass German defenders and initiate the French counter on a number of occasions, while his passing range and variety was outstanding. Unsurprisingly, it was he who played the ball to release Lucas Hernandez down the left side for the French goal, and what a sumptuous ball it was.

In a way, Pogba highlighted the difference between the two teams. Germany came with a nice system and game plan, dominated possession, and got themselves into lots of good positions. But they lacked a difference-making individual: someone to beat a man, open up a tight-knit defence with a killer pass, or find the net from outside the box. In Pogba, France have that sort of player. They also have Mbappe, Griezmann, Benzema and Kante. These are players who can change the game, open things up, or score a goal, all on their own.

This was a big victory for France. It was also a victory for personality, flair and skill in an era of football tactics defined by possession and structure.