For all the twists and turns seen in this season's Champions League, the competition has often had a familiar feel about it come the semi-finals. Traditional giants tend to fill up the final four spots, meaning the same teams face off on a fairly regular basis. However, despite having managed both Borussia Dortmund and now Liverpool, Jurgen Klopp has never shared a European tie with Barcelona.

That, of course, will change when the German takes his Premier League contenders to the Nou Camp on Wednesday evening.

Liverpool have beaten some high-calibre teams to reach this stage, securing group stage wins over Paris Saint-Germain and Napoli before knocking out Bayern Munich and Porto. Along the way, their intense pressing and quick counter-attacking has made them one of the most feared sides on the continent and led some to believe they may improve upon their runners-up finish of last term.

By contrast, this is the first time in four years that Barcelona have made it beyond the quarter-finals of the Champions League. And, if they want to go any further, they will have to avoid conceding away goals when Klopp's side visit on Wednesday. That means playing through serious pressure and neutering one of the fastest attacking teams around today. It's a tough task, but it can be done if Head Coach Ernesto Valverde gets his tactics right.

The 55-year-old former Athletic Bilbao and Valencia boss has earned a reputation as a pragmatist for the way his Barca side play. He has installed defensive order at a club renowned primarily for flowing attacking football; it's not exciting, but – as anyone who has seen Real Madrid will understand – it's not so easy to achieve this consistently with a group of players that has already won everything.

Valverde tends to prefer a basic 4-3-3 shape, although the setup does change depending on the phase of play and the situation. This will likely be his choice of formation for the game against Liverpool, with Marc-Andre ter Stegen behind a back four of Nelson Semedo, Gerard Pique, Clement Lenglet and Jordi Alba. Sergio Busquets will, as ever, anchor the midfield, while Ivan Rakitic and Arthur will play supportive roles behind a front three featuring Lionel Messi and Luis Suarez. 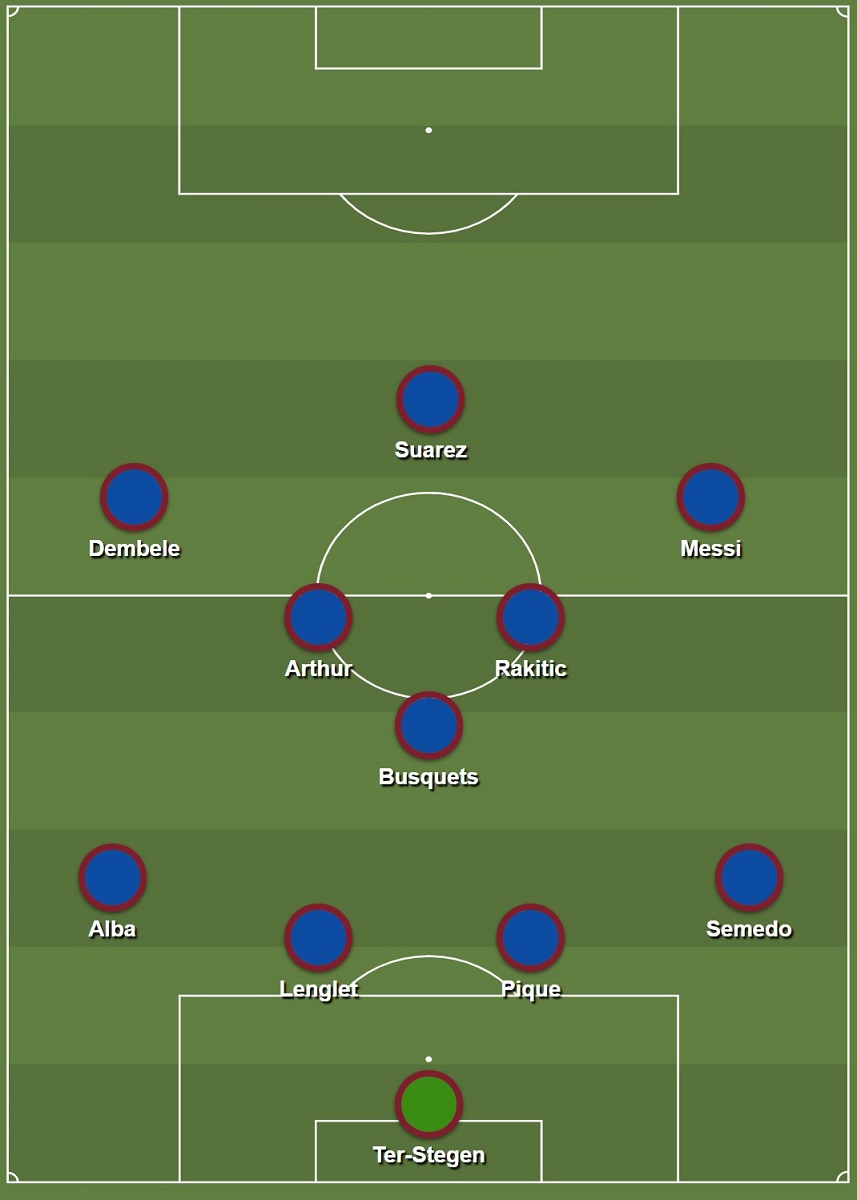 Perhaps the biggest selection decision facing Valverde here is whether to play Philippe Coutinho against his old team. The Brazilian starred for Liverpool, but hasn't quite found his best form since moving to Catalonia. It may be the case he is left out in favour of Ousmane Dembele, whose pace and ability to attack on either foot could offer a more direct option.

The way Liverpool play offers a reminder that football is a holistic game. It cannot be split up into four different sections – organised attack; attack-to-defence transition; organised defence; defence-to-attack transition – as many analysts would have you think. Rather, all of these phases are deeply interconnected, which helps to explain why Klopp's side are at their most dangerous when they don't have the ball.

Their pressing approach, which Klopp has modified since leaving Dortmund for Anfield, involves a highly compact front three forming the first line of defence. Rather than having Mohamed Salah and Sadio Mane drop back into midfield, they stay on the same line as striker Roberto Firmino. This, along with the instant pressing from the midfield three behind, makes it difficult for opponents to play through the middle against them. With this in mind, Barcelona may, begrudgingly, want to take a leaf out of Real Madrid's book.

Real deliberately didn't attempt to play through Liverpool during their Champions League final win last year. Rather they used offensive full-backs and attacked in the wider areas, making use of switches of play to the far wing where possible. Valverde may decide to follow the same course of action, utilising both Semedo and Alba – two extremely quick and attack-minded full-backs.

To enable their pushing forward, he could have Busquets drop deep between the two centre-backs. This is something Barcelona have done regularly throughout this season, and it could come in particularly handy on Wednesday. 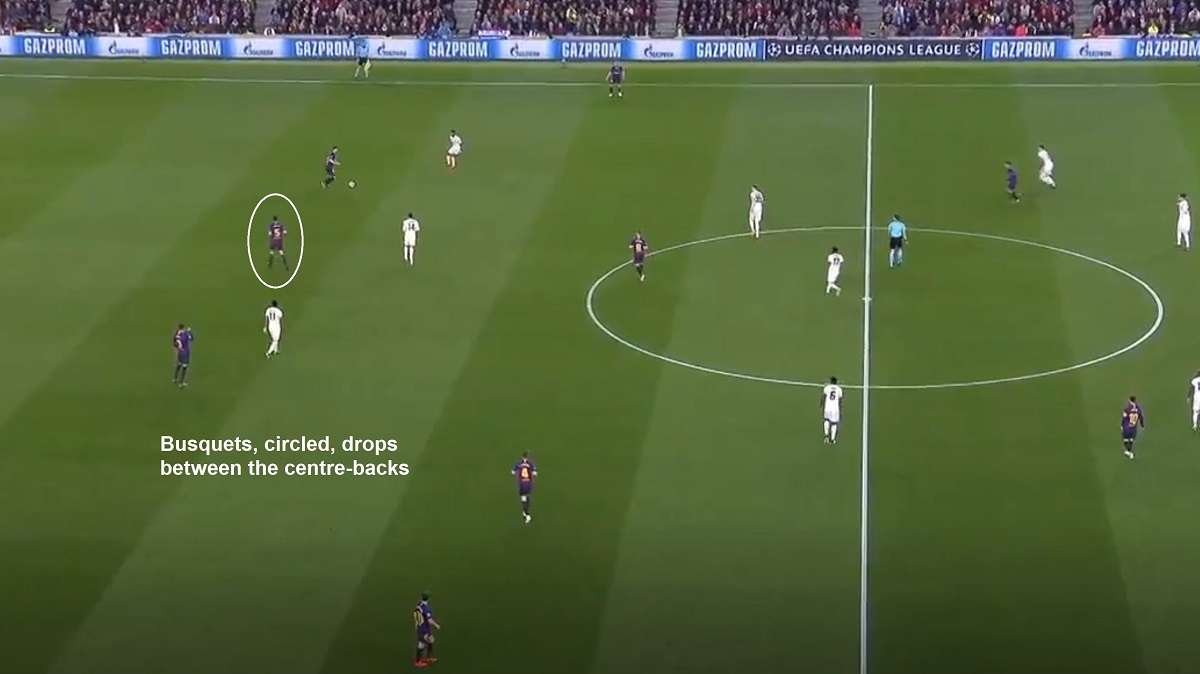 Not only would this give them an extra man to play out with and allow Semedo and Alba to take up higher positions to enable them to play around Liverpool's defensive block, rather than through it, but it would offer more security in defensive transitions. Should the ball be given away, Barca would have a back three to deal with the ensuing counter.

As mentioned earlier, few teams exemplify football's holism more than Liverpool. They are an attacking threat while defending, and this continues into their defensive transition. Just like at Dortmund, Klopp prioritises immediate pressing in this phase – he famously once said that: "No playmaker in the world can be as good as a good counter-pressing situation."

Considering this, once Barcelona have regained possession they would be wise to play forwards as quickly as they possibly can. Rather than exchanging short passes and encouraging the press from their opposition, they could look for the pace of Dembele, the runs of Suarez or the intelligent movement of Messi to try and exploit space on the break.

On the flip-side, Valverde's side should not copy Liverpool's ball-hunting in transition. Should an attack peter out high up the field, they may have more success dropping back into their shape immediately. 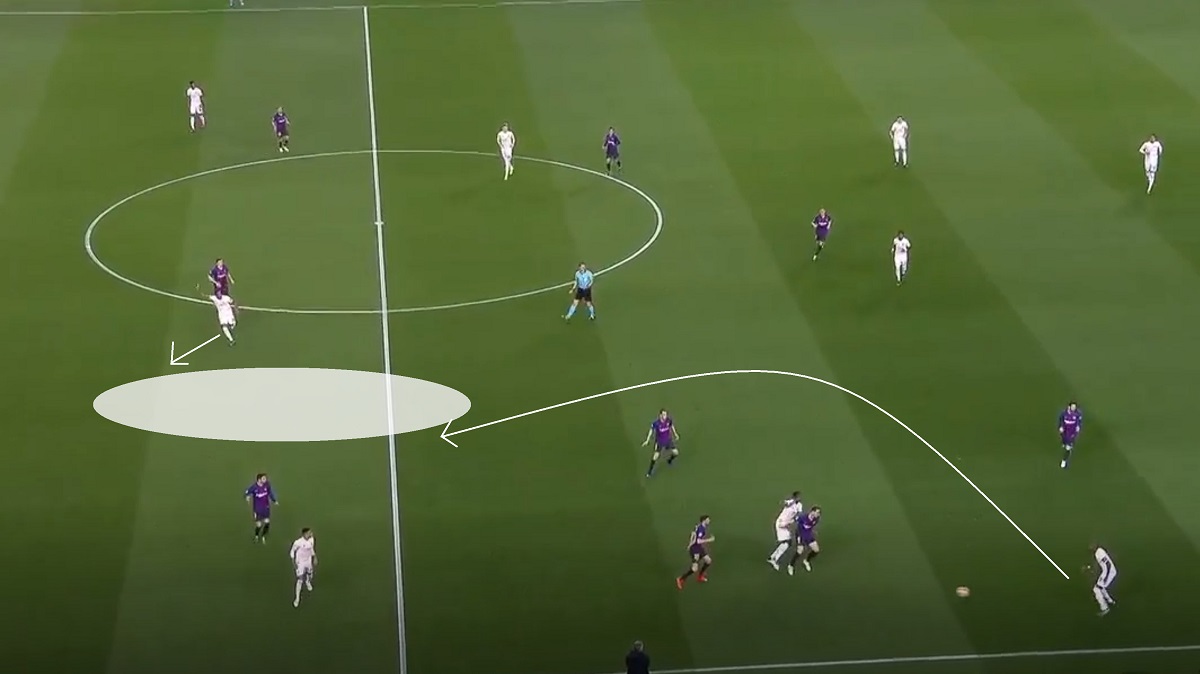 A 4-5-1 mid-block may be the most sensible approach, and they should also avoid going aggressively man-to-man as often as they did in the quarter-final against Manchester United (see above). At times, this strategy led to huge spaces opening in the channels – Liverpool, with their pace up front, will take advantage of such spaces ruthlessly.

By focusing on control in and out of possession, attacking in the wider areas, and avoiding chaotic transition situations, Barcelona can take away Liverpool's biggest strengths and minimise the chance of crucial away goals being conceded. In the process, they can give themselves a solid base to build on for the return leg at Anfield.