Hat-trick hero Ronaldo: A performance for his new club or the new Man Utd manager?

COMMENT: Three goals - including a screamer - and three points. If it was his motivation, Cristiano Ronaldo well and truly put himself in the shop window on Saturday. But for whom...?

Manchester United were good against Tottenham. Not great. Not dominant. But with Ronaldo's goals making the difference, the performance was impressive. A victory over a direct rival - a first for Ralf Rangnick. Some decent football. Some great goals. And Old Trafford was heaving again. A good night for the club.

And it was a good night for Ronaldo. It was he who set this five-goal thriller rolling with a superb opener. Almost lazily swinging his right foot through the ball to beat Hugo Lloris in Tottenham's goal by all of 30 yards. It came out of nowhere. From nothing. A goal 100 per cent due to Ronaldo. This is what the No7 can give to United if he's supported.

Some questioned Ronaldo's body language at the final whistle. Not in terms of attitude, but more in anger. Former teammate Roy Keane hinting in the post-match wrap of some animosity between Ronaldo and his manager.

"He looked angry today, a lot of aggression in his play," Keane, who would later call for Ronaldo to stay next season, declared. "Whatever's gone on in the last week of two, he's obviously upset with something."

For this column, we didn't see that. Yes, Ronaldo played with aggression. Controlled aggression. The type of passion Keane would demand from his United teammates back when he led the dressing room. But there was more. There was leadership.

Amongst the three goals was Ronaldo's very visible gestures to Jadon Sancho after his assist for the veteran's second. It was a simple rolled cross from the left flank. Nothing spectacular. But Ronaldo, after tapping home, made a very visible point of waiting for Sancho before fully celebrating. He demanded Sancho join in, dragging his young teammate into the jubilant melee. Both on paper and on the pitch, the message of unity - and responsibility - was clear. Ronaldo, both in mind and deed, is leading this group.

As mentioned, Keane would later talk up the prospect of Ronaldo staying and helping rebuild this squad - and this club. The Irishman perhaps receiving the same message as this column did last week. 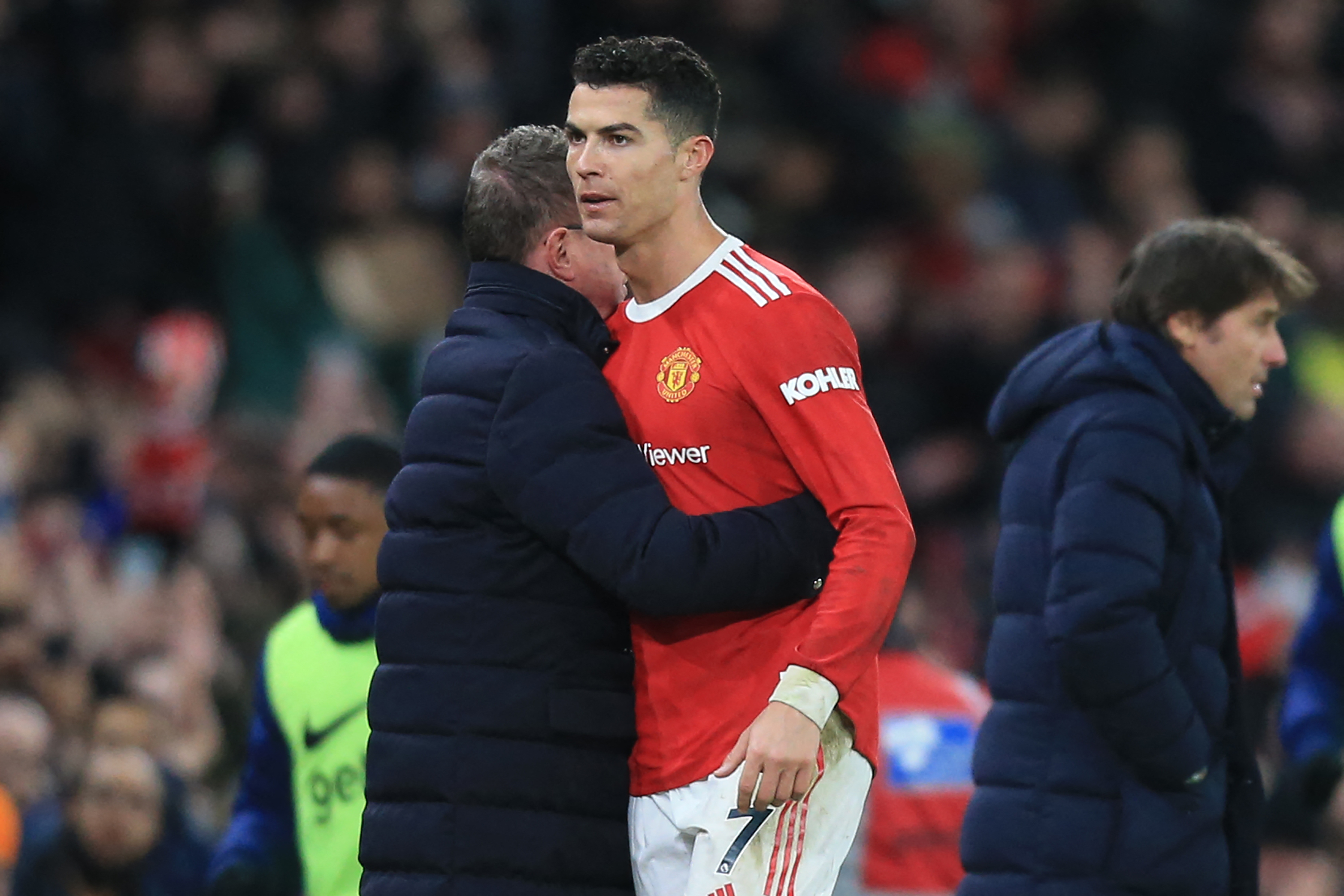 A reluctant embrace with Rangnick for Ronaldo after his hat-trick

If it's up to him, Ronaldo will start next season as a Manchester United player. For all the talk of crisis meetings with his agent, Jorge Mendes. Of demands to United directors about top four failures and contract releases. Word has reached us that Ronaldo and his family are settled and staying in England. His kids are happy with life. His eldest, Cristiano Jr, is now making a name for himself inside United's academy. And as the world has turned these past two years, Ronaldo recognises for his family and his football, England is his best option.

Yes, there's frustration, tension - even anger - towards Rangnick and how the caretaker manager treats their relationship. But Ronaldo knows this is temporary. Come the end of May, he won't have to consider the German again. There'll be a new man in charge - who's name we could know in weeks.

“It's a challenge with a player like Ronaldo," Rangnick, with damning faint praise, would state afterwards, "but he showed today that he still has the quality to play for a club like Manchester United."

Perhaps something was lost in translation. And certainly inflection and body language can convey a lot. But on paper, Ronaldo deserved much more than this surly, churlish response from his manager.

A hat-trick against an Antonio Conte team. And the manner in which it was taken. It can be reasoned that Ronaldo was giving a nod to any potential suitor out there. But with this treble, it was more about putting himself in the shop window for the next manager of Manchester United.

"Ronaldo has had criticism but the way he turned up tonight - he's been doing that throughout his career," Keane also remarked post-match. "Amazing.

"He has a huge part to play in the rebuilding of the club. You need Ronaldo in your team when he's producing like that."

As his old captain affirmed, United need Saturday's version of Ronaldo to stick around next season. And word is the veteran is happy to oblige.

From now to May. With every goal. With every performance. Ronaldo is putting himself in the shop window. Not for a new club. But for the next Manchester United manager.