Tuchel and new Chelsea board disagree over squad clearout plans

Boehly backing Tuchel as Chelsea go for Dembele AND Sterling

Mane camp hit out at claims he quit Liverpool over money

Harry Maguire & Man Utd captaincy: Why Rangnick, Ole need to look at themselves over his form woes

COMMENT: So sack him? Strip him of the armband? And then what? Where do Manchester United go if the club captaincy is removed from Harry Maguire...?

In theory. When it's coming from a position of good faith. There's an argument to be made. Some former United players making the point that given Maguire's form problems. The current spiral he appears to be in. Relieving him of the expectations and demands that come with being captain of Manchester United might actually be good for him. A temporary fix not as a punishment, but a decision in his best interests.

But in their argument, we can also find reason for Maguire's current position and why fans (if not the press) should cut their captain some slack.

United's No5 is carrying not just the team, but also the current manager. When United lose, it's Maguire, beyond everyone else - including Cristiano Ronaldo - who is copping it in the neck this season. Yet, he's kept fronting up. Playing through calf and chest injuries. The bad press. The hometown jeers. He's taken it all on - and kept going.

And he's had to. United, somehow, are still in with a good shot of a top four finish. But it'll be achieved by the players, not the current manager. The fortunes of this team will be driven by the captain and his lieutenants. Ahead of Sunday's trip to Elland Road, Ralf Rangnick's admission that he'd only been informed of the white-hot rivalry with Leeds last week, reaffirming the sense that he's not bought into this job for the long haul. No matter what happens to the team he inherited from Ole Gunnar Solskjaer, he'll wash his hands of it come June.

And then will come the consultancy job. He won't be 'kicked upstairs'. He won't ever be seen at Old Trafford. He'll make some recommendations. Be paid a fortune for it. And if they come off, will take full credit. Back in Moscow, ex-players and presidents of Lokomotiv are still debating over whether to rip up the German's contract. In other words, there's an expectation in Russia that Rangnick will continue working with Loko, just as he does with United. All the recognition, without the responsibility. A nice earner if you can get it.

But that doesn't help the players. If it all falls flat in the coming months, it'll be them left holding the bag, not Rangnick. And the face of that failure will be Maguire.

He's playing injured. He has unhappy teammates, as Rangnick admits. The place is leaking like a sieve. And those above him are living out of a suitcase, fully expecting to leave come season's end. Maguire is carrying all that on his shoulders - and is still expected to keep it together on the pitch.

But if the captaincy is removed, what of the fallout from such a decision? The press will smell blood. We've already had Maguire and Ronaldo publicly rubbish claims of a power struggle inside the dressing room. Just as we've had Marcus Rashford do much the same regarding his relationship with the Portuguese. And Rangnick also made it clear stories of a crisis summit between himself, Maguire and Ronaldo regarding the armband were the stuff of fantasy calcio.

After such a defiant defense, to now remove the armband from Maguire simply weakens the standing of all involved. 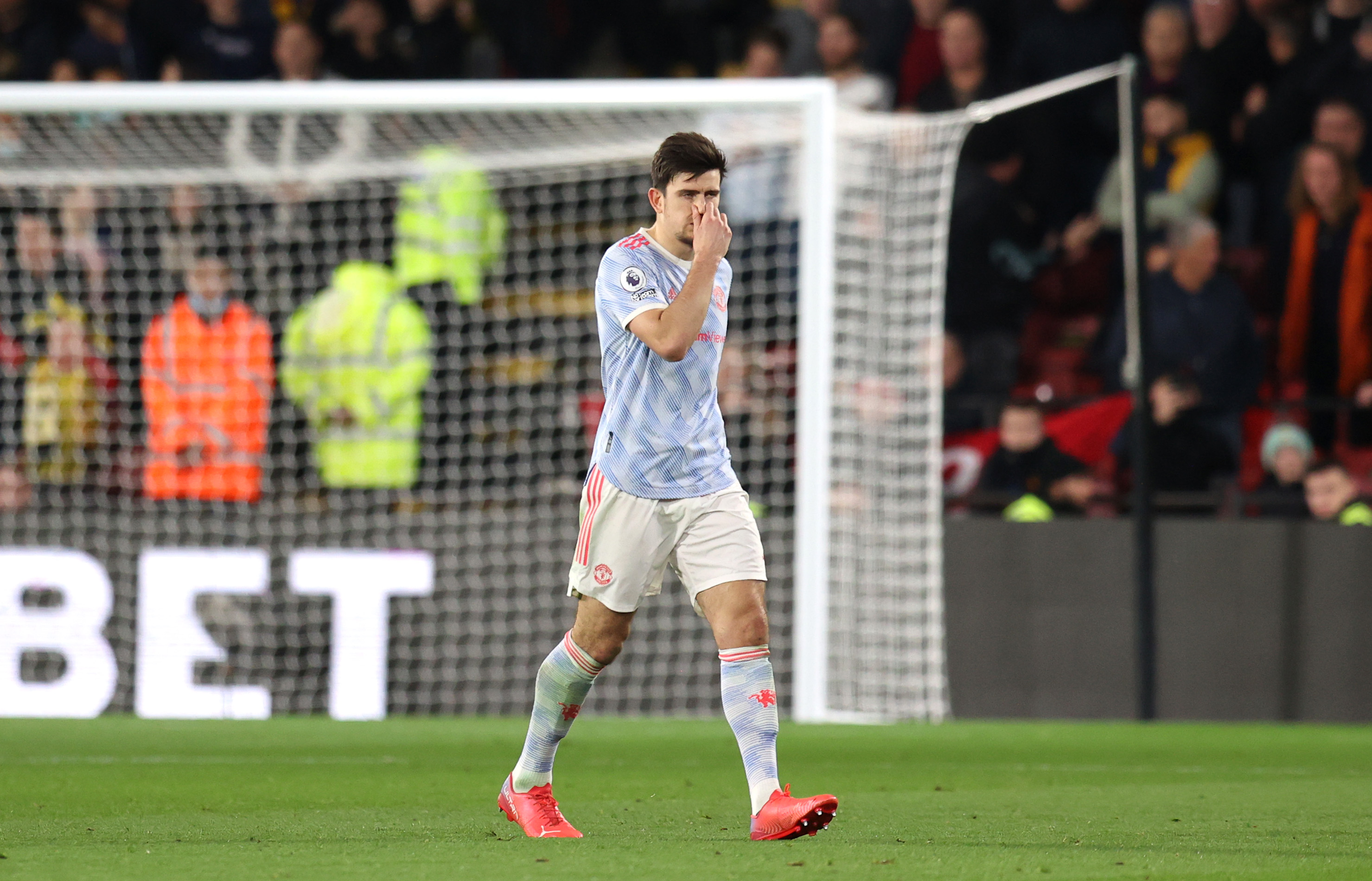 Maguire sent off at Watford

Maguire remains a great, typically British defender. Brave. Powerful. Fully committed. As good a centre-half as England has, no matter the issues he's had this season. And for United, despite the presence of Ronaldo, he also remains the club's best option as a long-term leader.

Take the armband away and give it to Ronaldo and United could find themselves in a worse position come June. There's no guarantee Ronaldo will stick around this summer. And all the club will be left with is either returning the captaincy to a player not deemed up to it four months earlier, or handing it to a teammate who's not ready.

The form is an issue, there's no avoiding that. But it's an issue which has been heightened by the tinkering of Maguire's managers. Both Solskjaer and Rangnick have never shown a willingness to build a back five as a unit. The positions around Maguire have been in a constant state of flux. Not just the centre-half alongside him, but also his fullbacks - even, under Solskjaer, the goalkeeper behind him.

Tribalfootball.com asked Gary Pallister for his opinion on Maguire's struggles and he was clear about how important the "bedrock" of the back five is to the success of a team.

"I do think it gives you a bedrock, everyone talks about myself and Brucey (Steve Bruce), but we had two great fullbacks alongside us," Pallister, a four-time Premier League title winner, told us last week.

"Paul Parker stuck to people, wouldn't let them get away, he maybe wasn't eye catching on the ball but what a job he did.

"On the other side there was Dennis Irwin who was one of the best fullbacks to ever play in the Premier League.

"It's about the unit, partnerships are important, and it probably helped with me and Steve that we were from the same part of the world.

"It helps you settle in, then after me and Steve there was Nemanja (Vidic) and Rio (Ferdinand) who also had great fullbacks either side in Gary Neville and Patrice Evra.

"Edwin Van der Sar as well, so it all becomes a great unit and I think the club has been searching for that since Nemanja and Rio left."

There's a good argument to be made that rotations have hurt Maguire and United's defensive unit. Just consider how long John Stones and Aymeric Laporte have had to wait their turn at Manchester City over the past 18 months. Pep Guardiola will rotate his players, but he rarely touches his back five.

So sack him? Strip him of the armband? That's not going to do Harry Maguire - nor Manchester United - any favours. Instead, the answer could simply be going back to basics and the bedrock this club's modern day success was built upon.