Hannibal Mejbri: Why he won't leave on-loan & why Man Utd scouts can celebrate

COMMENT: So if Mason this season, why not Hannibal the next? Could we see Mason Greenwood and Hannibal Mejbri playing together at Manchester United next season...?

We've mentioned this before, but they do need this one. The scouts, particularly United's international scouts, really do need Mejbri to live up to his hype in the coming seasons.

Andreas Pereira can be mentioned, but he's a Sir Alex Ferguson era signing - one who'll be a decade-long United player this time next year. For the post retirement of Sir Alex. The staffing and player upheaval since 2013. No foreigner signed to the academy has managed to establish himself within the senior squad. But they reckon they have one in Mejbri.

United's prime youth director at Carrington, Nicky Butt, has had no problem talking up the potential over the past 12 months. The Treble winner likening Mejbri's on-field character to former United and England captain Bryan Robson and contrasting the 17 year-old's style with senior teammate and countryman Paul Pogba.

"Hannibal is different to Paul (Pogba) when Paul was a youth team player," says Butt. "He's not as powerful as Paul, he isn't as dominant as him, he's a different kind of player to Paul but we all know about the talent he's got.

"Talent-wise, he's got such an immense talent to go on and play at a high level but there's a long way to go yet."

And regarding Mejbri's on-field character, Butt offers a nod to the likes of Robson and Roy Keane: "We've got the old-fashioned leaders, if you like, who are going to talk to the players and drive the team. Hannibal is a leader. The way he plays his football is 100mph, he's non-stop running up and down."

It broke last week that Ole Gunnar Solskjaer and his staff had spent the aftermath of the season finale at Leicester City discussing their loan strategy. Victory at the Foxes had secured a return to the Champions League - and their manager a new set of choices to make. No longer could Solskjaer use Europe - as he had last season - to help bring through the very best of their academy graduates. The Champions League offers a whole new set of demands. That lot that tasted action in the Europa League will have to be farmed out on-loan next season to maintain their progress. Though one who won't be among them is Mejbri.

Another season close to the first team squad? To train and gradually adjust to what's required to be a first teamer? Nah. Mejbri won't be released for loan next season simply for one reason: he's too good for that. There's an anticipation amongst Carrington staff that Mejbri will make his Premier League debut next term. Indeed, there's a belief he could do so before Christmas. And it won't be a one-off. Mejbri knows. The coaching staff around him know. If he grabs his chance, Solskjaer - as he has done with Greenwood - won't then whip it away for the sake of locker room politics. Play well and you keep your place. It's the message every young player who work the Carrington training pitches now know is more than idle words. Greenwood and Brandon Williams are proof of that. 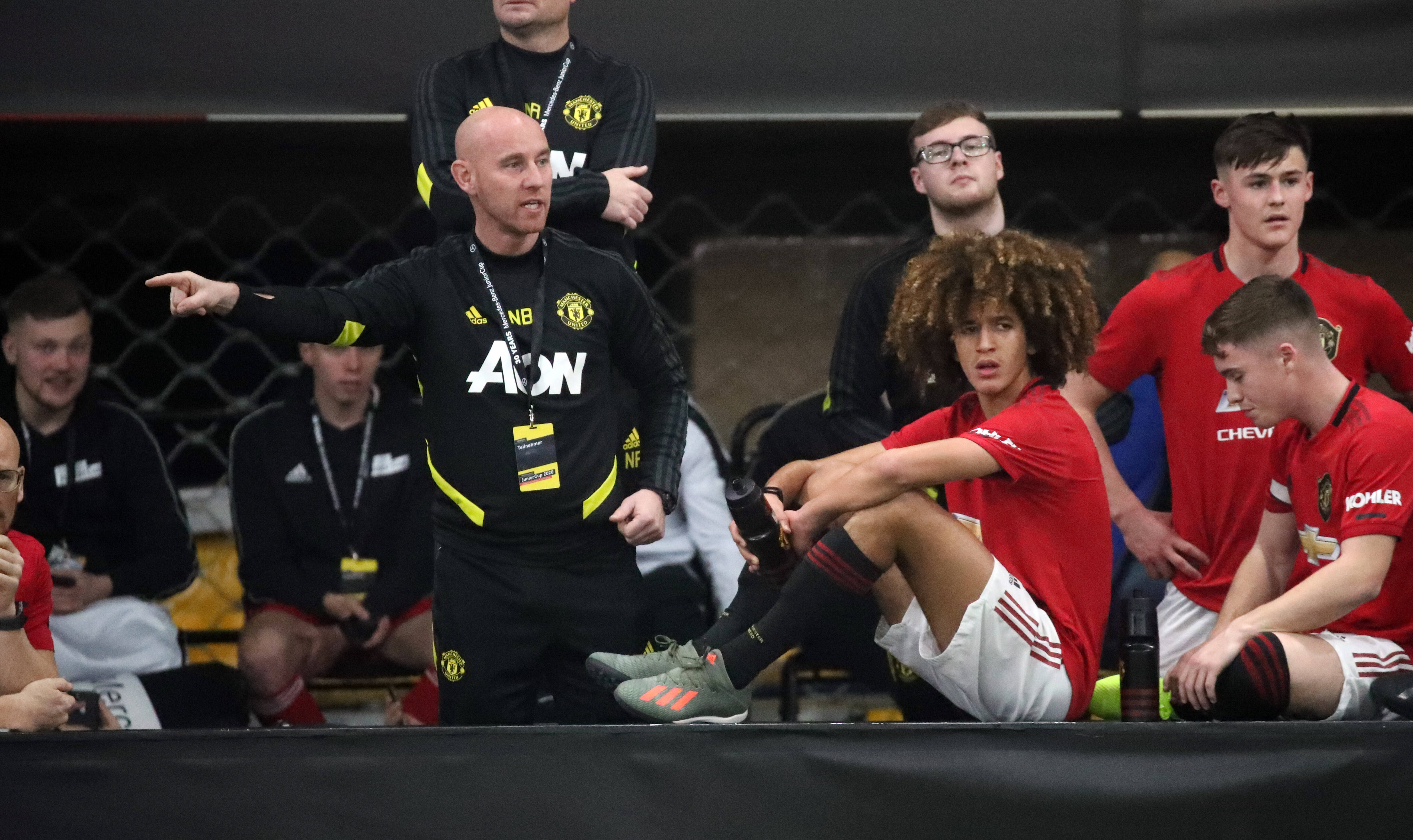 Nicky Butt: "Hannibal is a leader. The way he plays his football is 100mph."

And should Mejbri establish himself, it'll be a triumph for those previously mentioned scouts. Yeah, they had to fork out a fee (€5m down and €5m in bonuses) to ferry a then 16 year-old Mejbri away from AS Monaco a year ago. But his signing was years in the making. United following - and attempting to bring Mejbri and his family to England - from the ages of 11 and 12.

Half of Europe had Lotfi Mejbri's mobile number. Hannibal's father the key driver in his son's career. By 14, Mejbri was already a veteran of the Premier League training grounds. Arsenal having had the midfielder complete several 'internships' with their junior teams while he was still on the books of Paris FC. Barcelona, Manchester City - and United - had been in regular contact with Lotfi for years. Indeed, when it came to Hannibal making his move from PFC to Monaco, Lotfi concedes United were also front of mind.

“In the end, we had to decide between Monaco and the two Manchesters," he recalled, significantly also stating, "Hannibal has never been too attracted to PSG, he often says that it is a club without a soul."

Monaco won the deal, it's been claimed, with a €1m signing-on proposal for the family. An adidas endorsement deal would soon follow. But Lotfi is adamant every choice in his son's career has been made with football interests the priority.

"We never made it a question of money. If we had wanted that, we could have received much more than the amounts mentioned. I'll tell you an anecdote: when we had already signed with Monaco and we were on vacation in Tunisia, a lawyer mandated by Liverpool called me and made me a big offer. But I had only one word for him..."

Three years on and he is now United's. A player France have hopes of building a team around. Tunisia are making their attempts, but they'll be rebuffed. The Mejbri family know how highly regarded Hannibal is within the Les Bleus system.

"Hannibal is an obvious one," so says France U16 coach Jose Alcocer, "He stands out from the crowd. He's already a very strong boy with a very fluid game. He also has a big and beautiful personality who is already used to this environment. There are many expectations around him and he confirms them. He has all the qualities to reach a very high level."

And there's confidence inside United that "very high level" will be reached much sooner than expected. There'll be no more envy regarding Rayan Cherki and his breakthrough at Lyon. Just as Greenwood before him, Mejbri will be fast-tracked by Solskjaer next season.

And those happiest will be the scouts who had worked years on convincing the Mejbri family about the opportunities at United. They deserve this one.