COMMENT: There's one player at Arsenal happy the season will kickoff to empty stadiums. Though to be fair, Matteo Guendouzi is no Robinson Crusoe inside today's Gunners locker room...

If there's ever a chance of Guendouzi finding a way back at Arsenal, it will be these coming few months. A potential clean slate with manager Mikel Arteta ("everyone starts at zero"). No fans in attendance to boo and jeer him for last season's antics. Simply the opportunity to play well. Be talked up by those pundits 'allowed' to watch him up close. And to win over a watching support sitting at home and following him on a screen.

It's horrible. It's awful. And many of us believe it unnecessary. But it also gives Guendouzi the chance to re-establish himself as a needed Arsenal player.

He could still leave, of course. And it will be done with Arteta and Arsenal's blessing. Juninho Pernambucano, Olympique Lyon's sporting director, confirmed it last week. Arsenal are attempting to find a buyer - even a taker - for Guendouzi, having already included him in their offer for OL's midfield schemer Houssem Aouar.

But OL rejected the proposal. Not because they're unwilling to do business, but due to their disinterest in Guendouzi. If Arteta couldn't get through to him. If the sit-down he had with David Luiz was for nowt. Then maybe the public humiliation of Juninho's comments offered Guendouzi the reality check he needed. Even at a valuation of €15m - about 10 million quid, if you don't mind - Arsenal couldn't palm their young midfielder off into OL's hands.

As Juninho explained: "I get along very well with the sports director [Edu]. We spoke on the phone. Houssem Aouar is really appreciated by Arteta. There have been some discussions for Matteo Guendouzi who is also a good player.

"He was mentioned during the discussion, but this is not the profile we need, we were very clear. If it is like that, it does not interest us at all – it is, and we stopped."

Even the idea of taking on Guendouzi and selling him for profit was discarded by Juninho and Jean-Michel Aulas, the OL president. From being involved in Didier Deschamps' France squad a year ago, Guendouzi's stock has absolutely plummeted both in price and appeal. 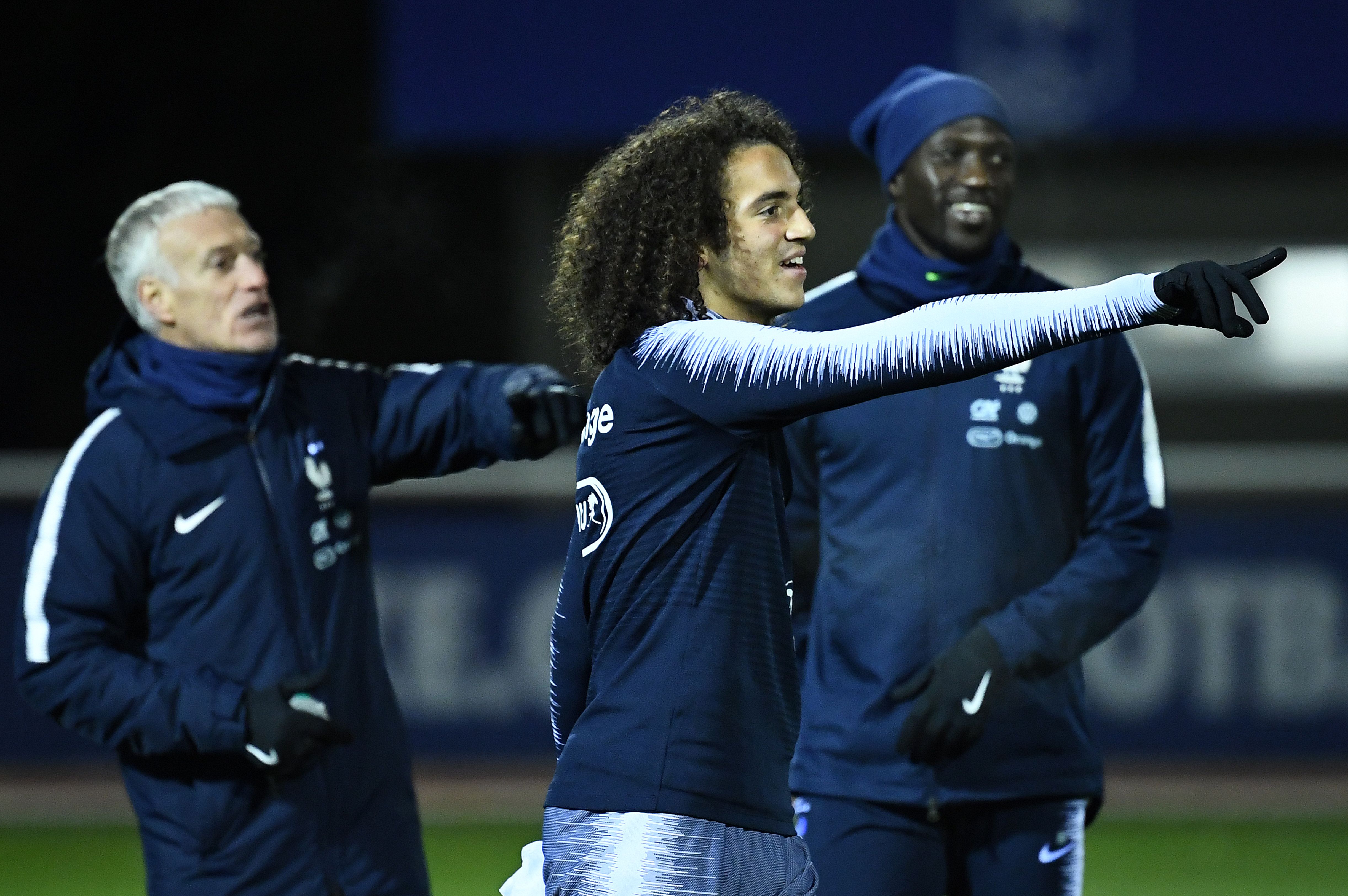 Deschamps (L) and Guendouzi just a year ago with France

The blow-up at Brighton has been well-documented. Pored over. But as bad as the images of Guendouzi clashing with Brighton's players - particularly fellow Frenchman Neal Maupay - were, it's what went on behind-the-scenes that saw Arteta dump the Frenchman for the remainder of the campaign.

He still has his supporters inside the club. And there's a belief Guendouzi can find his way back into Arteta's plans. But the attitude must change. Rowing with teammates. Clashing with staff. Ignoring the efforts and advice of leaders like Luiz and Edu in one-on-one meetings. Guendouzi's behaviour has brought exasperation for many inside the club. But like this column, for others there remains a hope that these are just growing pains and the potential we can all see will be realised in an Arsenal shirt.

Juninho's words may've helped. There is a suspicion that Guendouzi's antics have come from the belief he can find himself a new home the equivalent - if not superior - to London Colney. But that confidence is increasingly appearing to be misguided.

Agents for the player, both directly and those hoping to catch a cash wave, have been attempting to drum up interest since the early New Year - but with little success. A 21 year-old midfielder. Standing at 6ft 1in. Box-to-box. And from a club of Arsenal's size? You'd think they'd be making a stampede to Guendouzi's front door. But there's been next-to-nothing. Indeed, intermediaries tell this column all that talk about Barcelona and Atletico Madrid has been agent driven.

Though, it must be mentioned, there is solid interest from PSG. Leonardo, the club's sporting director, is open to bringing Guendouzi back this summer. Before joining Lorient, Guendouzi had spent his formative years in PSG's academy system.

But again, Leonardo isn't looking at Guendouzi as an immediate first-choice addition. PSG are in need of local players to satisfy squad quotas. That a former cadet of theirs is available has caught the eye of the Brazilian.

But like with Juninho, Guendouzi isn't "a profile" Leonardo needs. At least not on the pitch. And should PSG firm up their interest, the question will be: is Guendouzi happy returning to Paris to essentially fill a quota?

He's back in London today. Fresh from playing his first games of competitive football since the Brighton blow-up. And credit to him, Guendouzi let no-one down as he impressed in France U21s' two Euros qualifying victories against Georgia and Armenia. An assist in the first triumph against Georgia was followed up with winning a penalty in the second against Armenia. And in the aftermath, Guendouzi offered a first public commitment to Arsenal since Falmer stadium.

"Two games, 6 points! Proud of my team... Now let's get back to work at Arsenal," he posted to social media. Of course, you can read too much into such things, but if he puts into action the line "work at Arsenal" it'll go a long way into winning back the confidence of his manager.

A year ago, Guendouzi had played his way into Deschamps' France squad. The World Cup winners. In England, he was being talked about a ten-year Arsenal player. A fixture of the club's midfield for the next decade. A £40... £50... £60 million player. A favourite of the Arsenal fans and popular with teammates.

Guendouzi is still that player. Just as there's many he shares a dressing room with, there's plenty who work alongside Arteta who believe the same. It's now all about attitude - and humility.

And without the Arsenal boo-boys seeking to provoke in these opening weeks of the season, if he can win over his manager, there's every chance Guendouzi can also win over the support watching on at home.