COMMENT: It was a clarion call from a dressing room senator. It was loud. And it should've been motivating. For these youngsters called up for Manchester United's preseason... dreams, indeed careers, can be transformed overnight...

The stirring, rousing call came from the elder statesman of United's locker room: Nemanja Matic. Fresh from a summer for coaching courses. With management and motivation still front of mind. The Serb offered some advice - and wisdom - to his young teammates afforded an invitation from Ole Gunnar Solskjaer to be part of this senior preseason: Don't go through the motions. Don't take anything for granted. These next few weeks could be the making of your career.

"I saw so many things in football," declared Matic just as United's preseason had launched. “One day you don't see a player, but the next day he plays a friendly game amazing, and then the manager starts to think about him, and then everything can change in one day.

"You need to work for that and you need to deserve sometimes the luck. They have a great opportunity now for that."

This was no throwaway soundbite. There's opportunities this preseason. In a summer of both the Copa America and Euros, United's internationals are staggering their return. Gaps created have needed filling. And the manager, after introducing so many of this current crop of kids last season, will be testing their progress in the coming weeks.

Shola Shoretire, Anthony Elanga and Hannibal will all - legitimately - be playing for a place in Solskjaer's plans for the new season. A loan away, or registration for United's Premier League squad, it will all be decided over the next month.

For those whom spent the last campaign away from the club, there's a new chance. A clean slate. The opportunity to put into practice what they've learned these past 12 months in front of the manager and his staff. Matic, for one, has definitely noticed the improvement in some of his young teammates.

"We have some great, talented players in our squad now," says the veteran midfielder. "Some of them they already played with us in the league, some of them were on loan. It's always good to see how they've improved, because I remember when I signed four years ago they were kids. Now they are serious people!"

But are they serious contenders? Ethan Laird was outstanding at fullback for MK Dons last season. James Garner the same in midfield for Chris Hughton's Nottingham Forest. And without Teden Mengi, Wayne Rooney may not have a job at Derby County this new season. Indeed, such was the impression made by all three, that their respective managers have made it clear that they want them back for the new campaign. 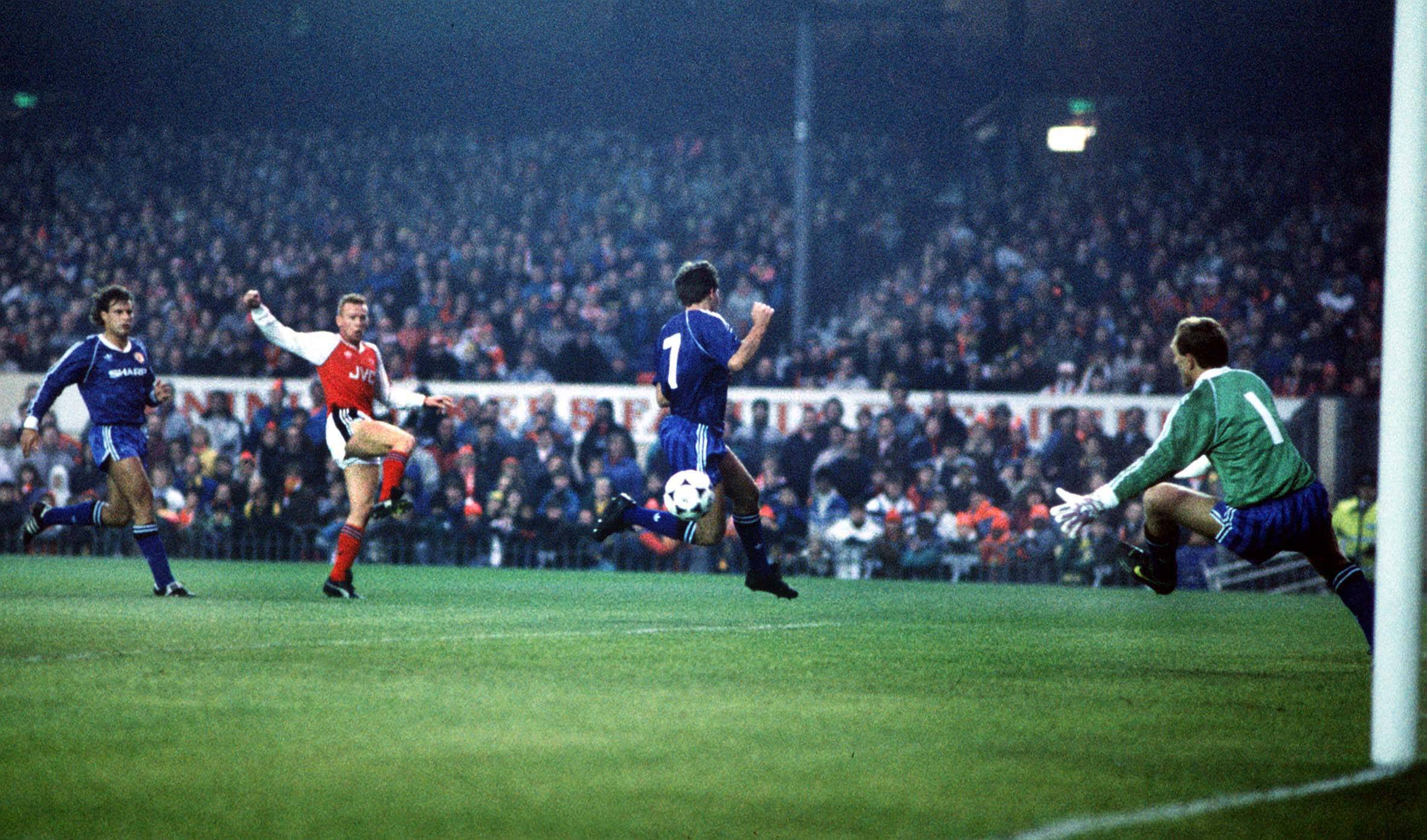 Blackmore (L) in action against Arsenal at Highbury

But with the squad currently in a state of flux, there are opportunities that have opened up for these players. A strong showing on the Carrington pitches. An "amazing", as Matic puts it, half-hour in a friendly, and it can all change.

His career was at a different point. But his status was similar. Over 30 years ago, Clayton Blackmore - a jack of all trades utility - scored for a patched-up United in the old Charity Shield against Liverpool - and would go on to have a career best campaign.

At 26, the Wales international was a squad player for Sir Alex Ferguson. A natural, ball-winning midfielder with a ferocious long-range shot, Blackmore was rarely employed there by Ferguson. Indeed, he rarely earned himself a run of games under the Scot. But after taking his chance in the curtain raiser at the old Wembley stadium, Blackmore finished that 1990/91 season with a Cup Winners' Cup medal - and as a left-back. Ferguson refused to drop him for that European run. He couldn't. There were more natural fits for left-back, but Blackmore - for the one season - made that position his. Injuries and a shaky transfer market had opened the door for the utility on that first day of the season against Liverpool - and Blackmore charged through it.

And this same attitude is what Solskjaer will be seeking from his players - young, old and inbetween - over these four weeks. He's been there. He knows how it feels to be overlooked when a player feels he deserves better. Solskjaer has more than once recalled reminding Sir Alex, after being left out of an XI, that a promise had been made that he would start if he scored in the previous game. That confrontation being made in front of teammates who had been named ahead of him.

So just as Ferguson did with Blackmore, Solskjaer will do right by a player who performs. No matter the reputation - or age - of those on the outside, if a youngster is playing out of his skin, Solskjaer won't hold him back.

Mason Greenwood knows this. Indeed, United's No11 knows he has a supporter in Solskjaer. And with Marcus Rashford choosing to go under the knife now to correct his injury niggles, there is an opening for Greenwood to establish himself ahead of his senior teammate.

Now 19 and left at home by England coach Gareth Southgate. Greenwood has the luxury of getting a full preseason under his belt. What's more, he can do so with the motivation of filling the void left by Rashford for the next three months. It was Rashford who chose to delay his operation until now, not Greenwood. It was Rashford who put his Euro 2020 hopes ahead of a full preseason and the start of a new campaign with United, not Greenwood.

If Greenwood, who will be 20 in October, believes he can carry United's attack. If, after everything he's done these past two seasons, he is convinced he deserves a long-term shot at being the club's No9 (which, it must be said, he does). Then he's not going to have a better chance than the opening months of season 2021/22.

Rashford made his choice. A choice that's opened up an opportunity to someone else. But that's what preseason is all about. Particularly at a club like Manchester United. Dreams, indeed careers, can be transformed overnight...