COMMENT: Beyond squad management. Beyond transfer policy. Beyond any if's or but's. For Joe Gomez, this is a heart-breaker. The chance to truly establish himself at Liverpool ripped out from under him...

Before that collapse on the training pitch at St George's Park, Gomez was full of energy. Positivity. This was it. At 23 and five years into a Liverpool career, here was his big opportunity. The chance to get out from under the shadow of Virgil van Dijk. To affirm himself as a key foundation in this Liverpool team. He recognised it. He was bouncing because of it. And then his knee went out from under him...

Which, for Jurgen Klopp, leaves available only Joel Matip as a recognised - senior - centre-half. A Joel Matip who has only just recovered from a hamstring strain. For the first time, the German partnered Gomez at the back for Sunday's 1-1 draw at Manchester City. Given they've been together at Liverpool for four years, you can understand Gomez's frustration today.

For the manager, it was the 37th different centre-half pairing Klopp has employed over his five years in charge. He may moan about the calender. He might whine about substitutions. But this problem at centre-half has been a long time coming. The busy schedule is more an excuse than a reason.

Pep Guardiola and Manchester City have been working through similar problems for years. The City boss had to pick and choose the right battles to risk Vincent Kompany's selection. His replacement, Aymeric Laporte, would later arrive, impress and then break down. Even Nathan Ake has just suffered a setback while away with Holland. It's football. English football. A brand of the game that involves attrition as much as goals and excitement. And whether you're going for a title, a top four finish or league safety, it's a skill to manage and manoeuver your squad through these unique demands.

Matip was a Klopp signing. But Gomez wasn't. Which illustrates how little focus there has been on the centre-half position since Klopp's arrival. Indeed, the one move they made to solve the problem was to spend world record money on Van Dijk. It worked. But below the Dutchman, there's been little development. 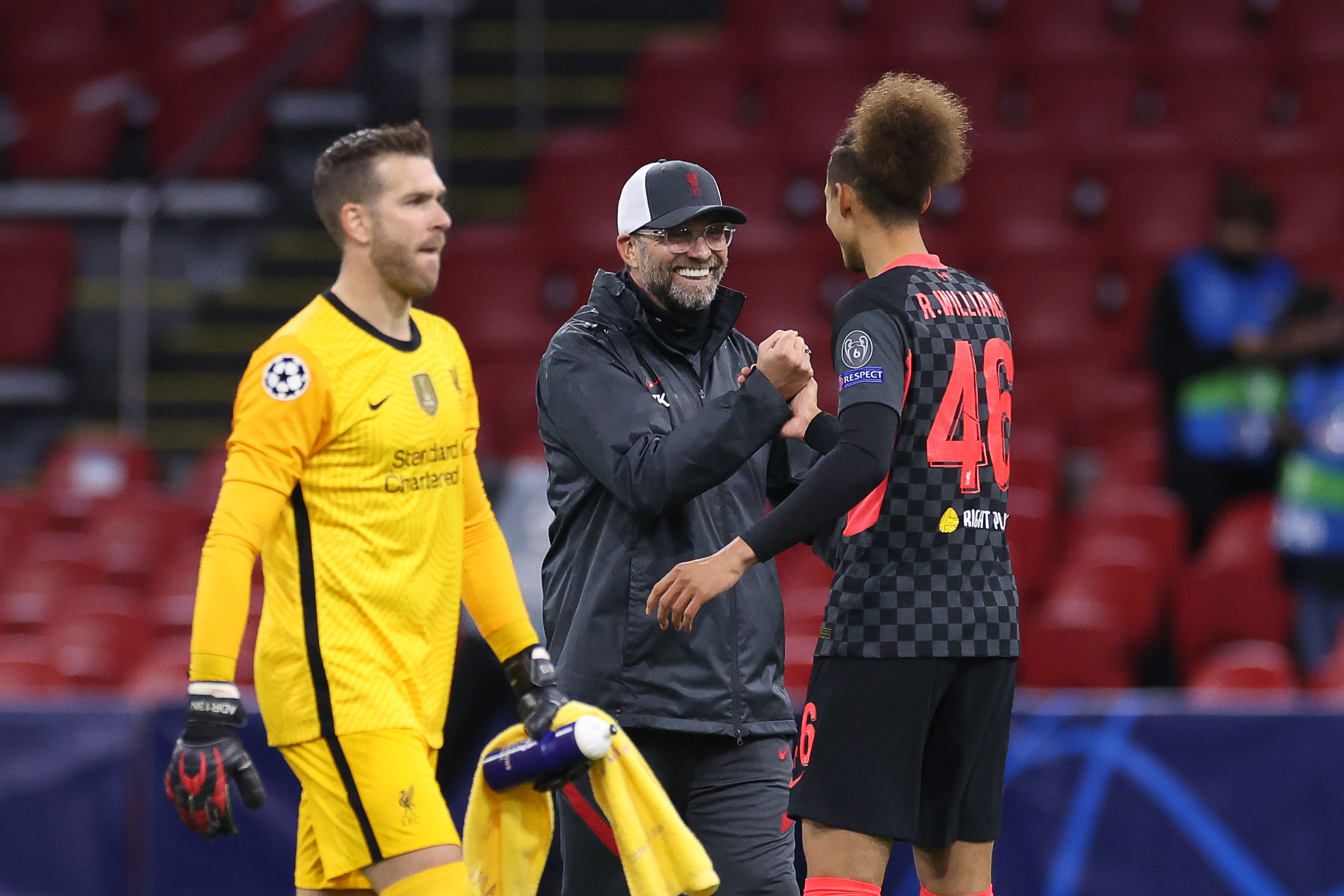 Klopp celebrates victory at Ajax this season with Williams

Klopp has been caught out. Even entering a season without a front-loaded schedule, the balance of his squad would still draw questions. Three senior centre-backs, plus a couple of youngsters like Rhys Williams and Nathaniel Phillips. Even for a Leeds United or Burnley, without the commitments of Europe, it would raise eyebrows. But going into a Champions League campaign with such limited defensive numbers must be questioned.

Of course, that would be if the manager in charge actually wanted to compete for everything. That he appreciated the Cup competitions; Respected the lower league opposition his team would draw - and understood the importance to protect and conserve such traditions of the English game. But this is Klopp. And this is today's Liverpool. A Liverpool whose owners are lobbying to have the League Cup scrapped. You only need consider those three senior centre-halves Liverpool have listed to know Klopp's plans for this season's Cup competitions...

But even if Klopp was to turn his nose up at the Cups, going into a Premier and Champions League campaign with three senior centre-backs was always going to be risky.

And it could've been worse. After a successful loan last season with VfB Stuttgart, helping them to promotion, Phillips had one foot out the door before the domestic market shut on October 16. A fortnight later, he was making his full Premier League debut, producing a "monster" performance, as Klopp put it, in victory over West Ham.

But it has to be said, Phillips' arrival wasn't the stuff of clear, considered recruiting. A reject from Bolton Wanderers, where Dad Jimmy played over 300 games. Phillips was ready to move to the US and take up an economics degree before a call from Liverpool arrived. Preseason trials in front of Klopp would lead to a contract offer and a second chance. Not exactly the measured approach Liverpool's front office have come to be known as far as their recruiting goes.

And come January, Klopp will have a decision to make. Stuttgart's sporting director Sven Mislintat had hoped to keep hold of Phillips this season, even buy him, but VfB lacked the finances to make a deal happen. Instead, as this column has learned, the two parties have agreed to speak in January about a new six-month loan for Phillips. Mislintat's aim will be to use the time to convince the 23 year-old to sign permanently with them when his Reds deal expires in June.

With Van Dijk and Gomez sidelined, the latest doing the rounds is that Klopp will turn to 17 year-old Billy Koumetio. Again, like Phillips, a free signing after being allowed to come off contract at French minnows US Orleans. The coaching staff at Liverpool are convinced he has a chance, much like Williams, but a 17 year-old centre-half playing in the Premier League? It just doesn't happen.

So Klopp will turn to his midfielders. Fabinho. Possibly Jordan Henderson, the captain. And hope no-one else - especially Matip - breaks down. But it must be said, this could've happened to any team in any season of the Premier League. In terms of the central defensive positions, the planning just hasn't been there.

Harvey Elliot, Curtis Jones - you can see the succession plan for Liverpool's midfield. Diogo Jota, at 23, and Rhian Brewster, before he nicked off to Sheffield United, spoke the same for Liverpool's plans in attack. But at centre-half, no such clear preparation is apparent.

It's a heart-breaker for Gomez, but the risk was always there. His knee injury only exposing a fault in Klopp's squad management this season - and in the manager's transfer policy over these past five years.

Don't blame the schedule, Liverpool's lack of focus on their centre-half recruiting is simply being exposed.