​From Moscow to Saint Petersburg - World Cup 2018: The End

Over the next month, I'll be covering the World Cup for Tribalfootball. And along the way, I'd like to share with you some of my experiences and keep you up to date with all the action.

It was a whirlwind week for me after the World Cup final last Sunday. I had to rush directly to the airport for a 13 hour transit (including six hours in Greece) back to England, then pack my belongings and jet off for another 26 hours down under. I'm home now and the past seven days have given me plenty of time to digest France's win over Croatia and the tournament as a whole.

Neutrals couldn't have asked for a better final. It was easily in the top three, if not the best match of the tournament. It had a bit of everything; a penalty, stunning goal, shocking keeper error, VAR, own goal and pitch invaders. I thought Croatia played the best football on the day. But it was as though their luck had run out after three extra-time wins on route to the final. To France's credit they were clinical and disciplined at the back. Didier Deschamps may not have created a France team using their maximal attacking potential, but he helped shape a cohesive unit that listened wholeheartedly to his instructions.

For me, the lack of any standout teams made this tournament truly special. Sure, there have been notable early exits in every World Cup, but for none of Germany, Spain, Argentina and Portugal to make the quarterfinals was startling. The by-product was a number of enthralling encounters in the knockout stages right up until the final. There wasn't say a Germany 2014 or Spain 2010, no great sides you'd look at and say 'I wouldn't want to play them'. Every single team contained glaring deficiencies heading into every single game. And in the end it was the team who successfully masked their deficiencies that took home the ultimate prize. 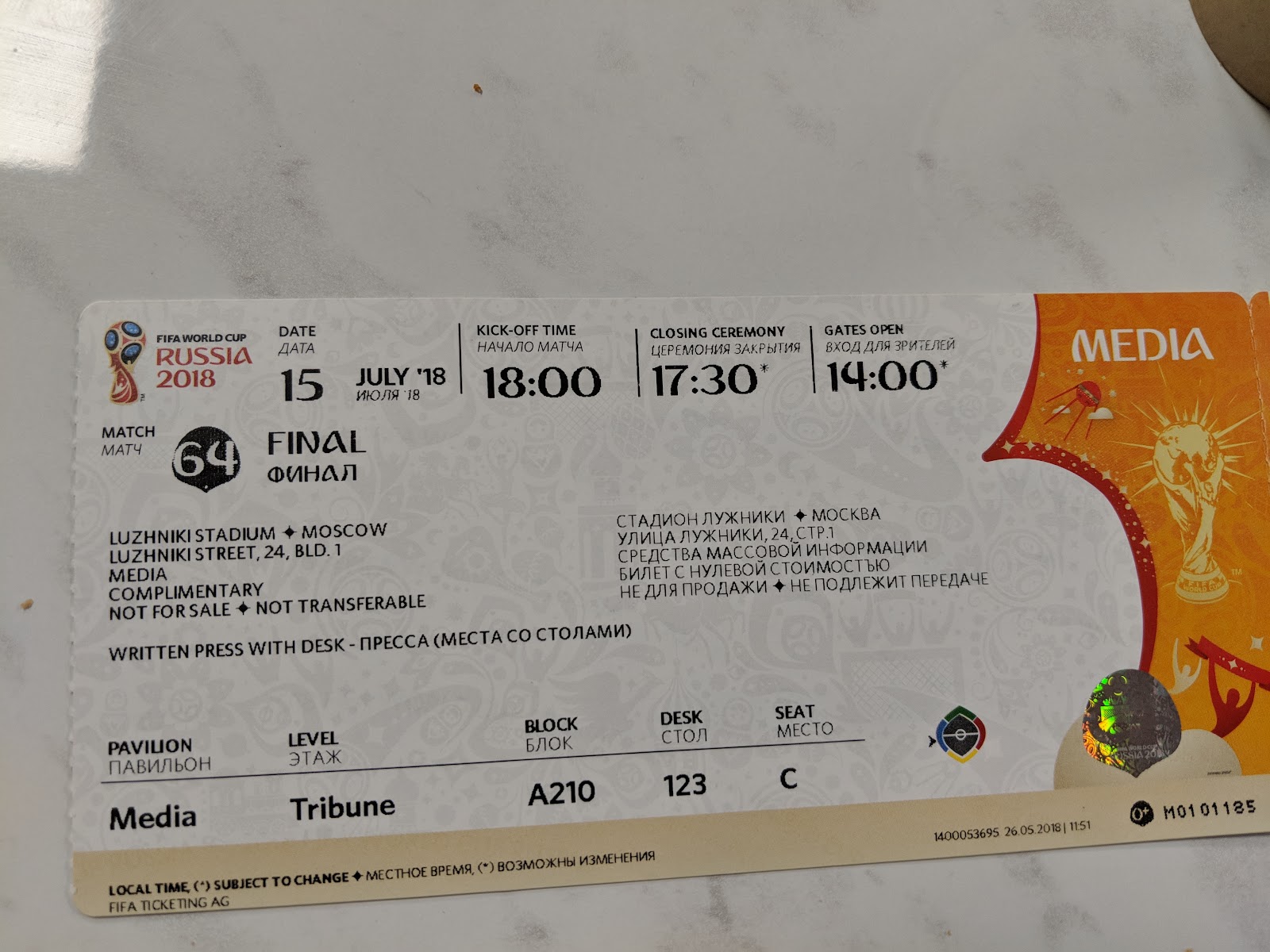 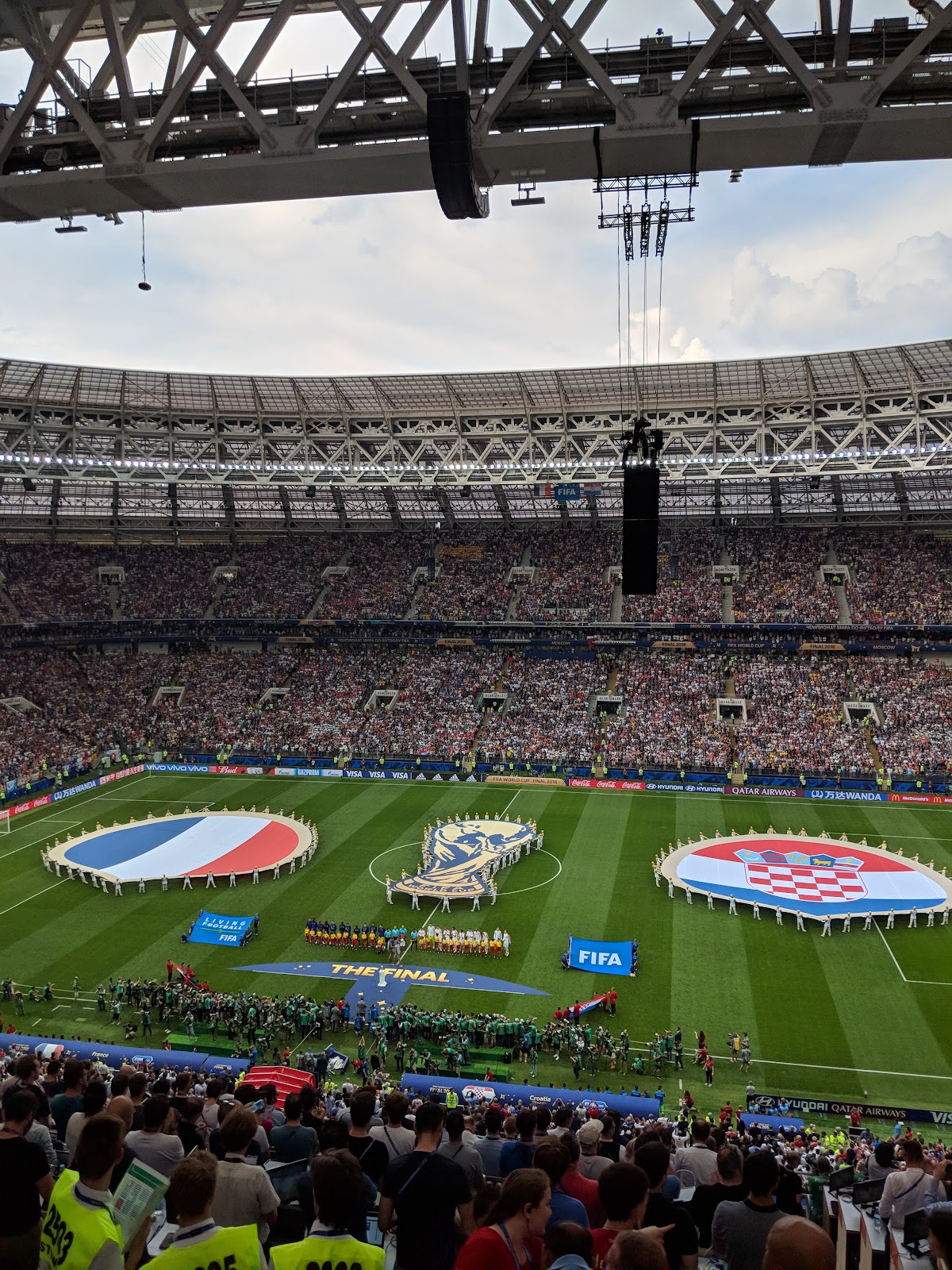 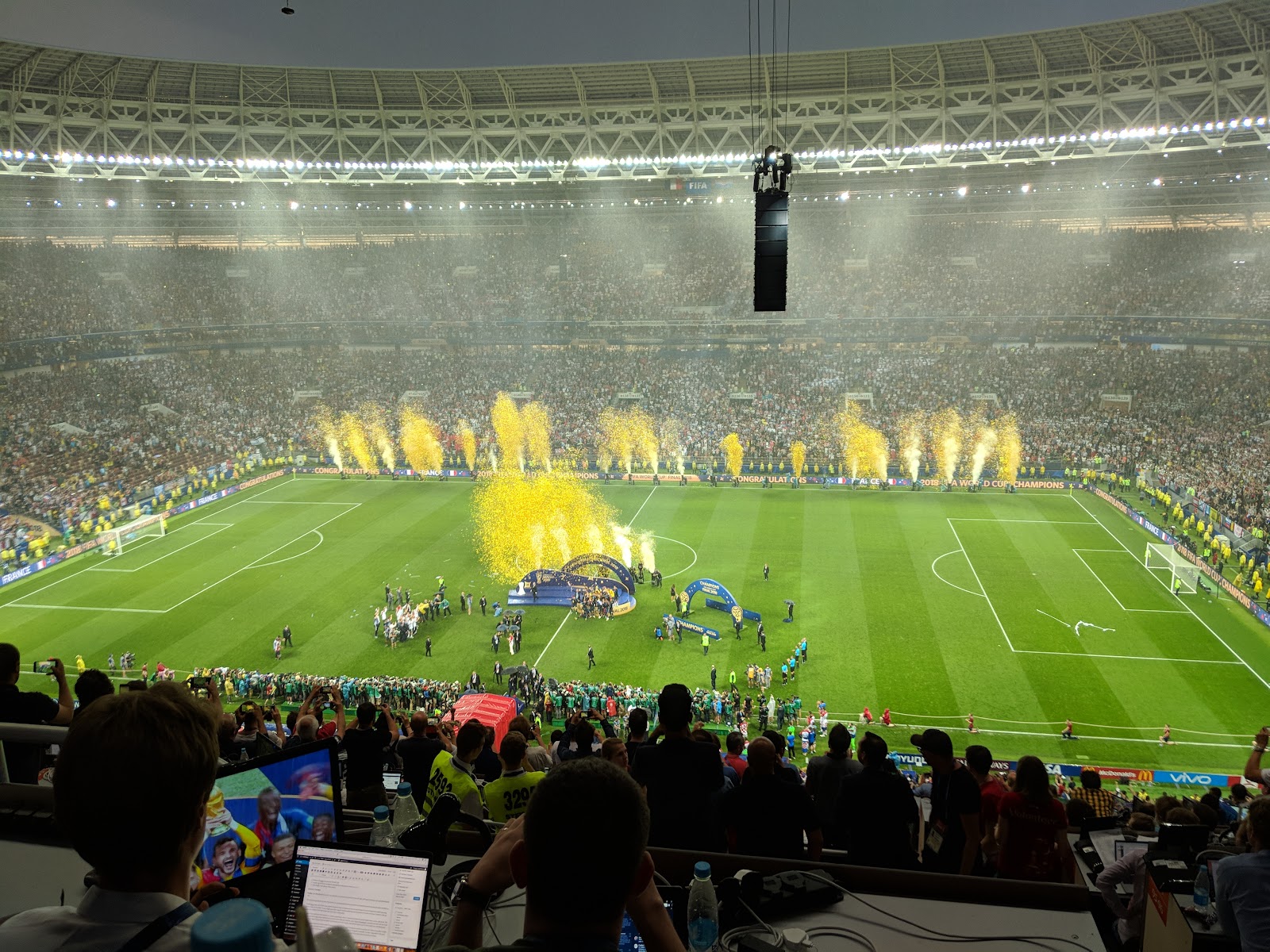 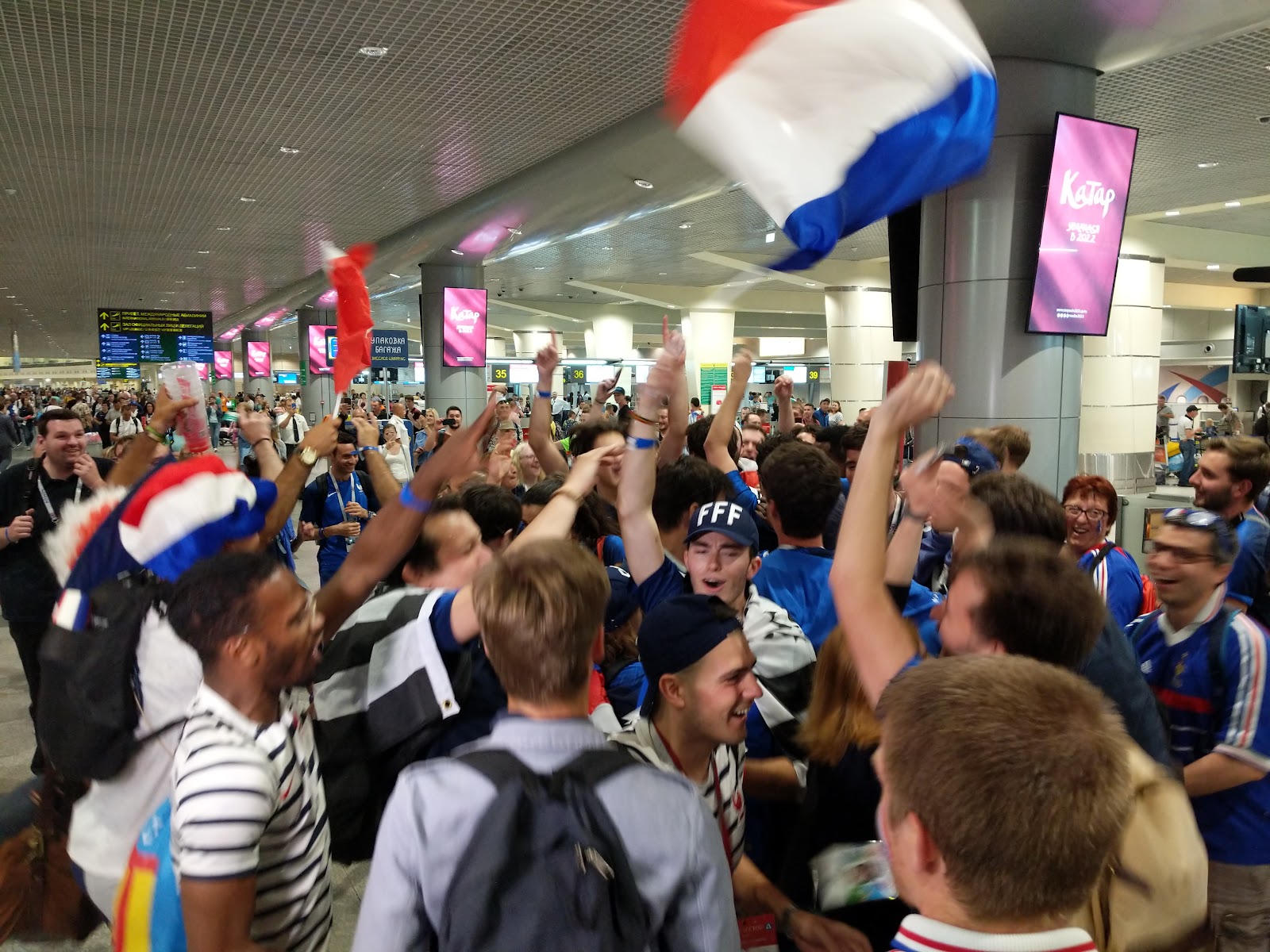 It was somewhat bittersweet when the final whistle blew on Sunday. After witnessing a World Cup final, I was obviously chuffed, but at the same time, it suddenly hit me that the adventure was now over.

For a month I was living the dream. The first two weeks were like being strapped into a Ferrari with the gears only changing intermittently between games and sleep. Each morning I'd wake up and be getting ready to either watch a game or preparing for a trip to another city. The final two weeks were quieter, but the magnitude of those final matches made it no less intense. Intertwined with this excitement from the matches was the constant activity occurring outside the stadiums.

It was incredible to see how football can be used as a tool to unify people from different cultures. I'll look back fondly on seeing Portuguese and Moroccans arm in arm singing songs, Brazilians and Russians talking tactics on the train, and the sheer ecstasy of the Argentinians who stayed an hour inside the stadium after beating Nigeria. There was a real sense of positivity in the air throughout the tournament. I never felt any angst or tension. It seemed that the passion shown from supporters derived from love, and was not just a means to vent anger and frustration. No group of people epitomised this mentality more than supporters from the South American nations. They manufactured an atmosphere, both at the games and in the streets, that constantly left me in awe, and at times, partially deaf.

I'd have to agree with the general consensus that Russia produced an environment conducive for spectators to enjoy such a positive experience. I admit that I was surprised by this fact. All I heard was negative things about Russia, which made me feel slightly apprehensive before leaving England in June. But after 32 days, I never experienced trouble getting around or at any point felt unsafe, even in the early hours of the morning. I didn't see one single fight or precarious situation. The organisation and safety was first class. The local people, in each of the four cities I visited, were always kind, hospitable and generous. Moscow and Saint Petersburg were breathtaking cities. And I'm sure I'm not alone amongst World Cup travellers in saying that I'd want to visit Russia again one day.

I'm still shocked about the World Cup. That I was fortunate enough to attend 14 World Cup matches, create lifelong memories and live in a constant state of excitement for over a month, which now seems to have gone by so quickly. Thank you to everyone who has followed my journey, or popped in anywhere along the way, I hope I provided a small insight into what life was like on the road in Russia. 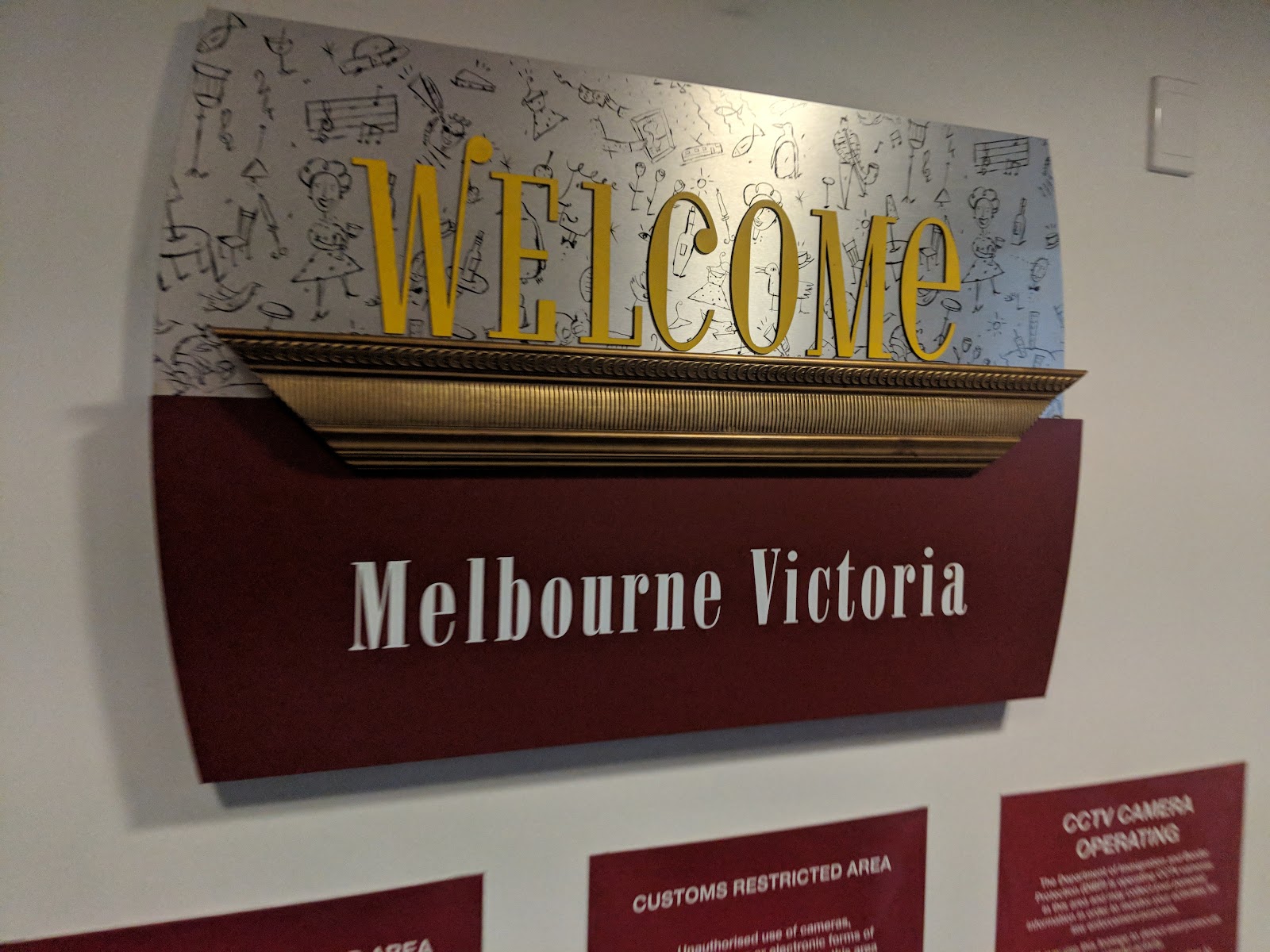 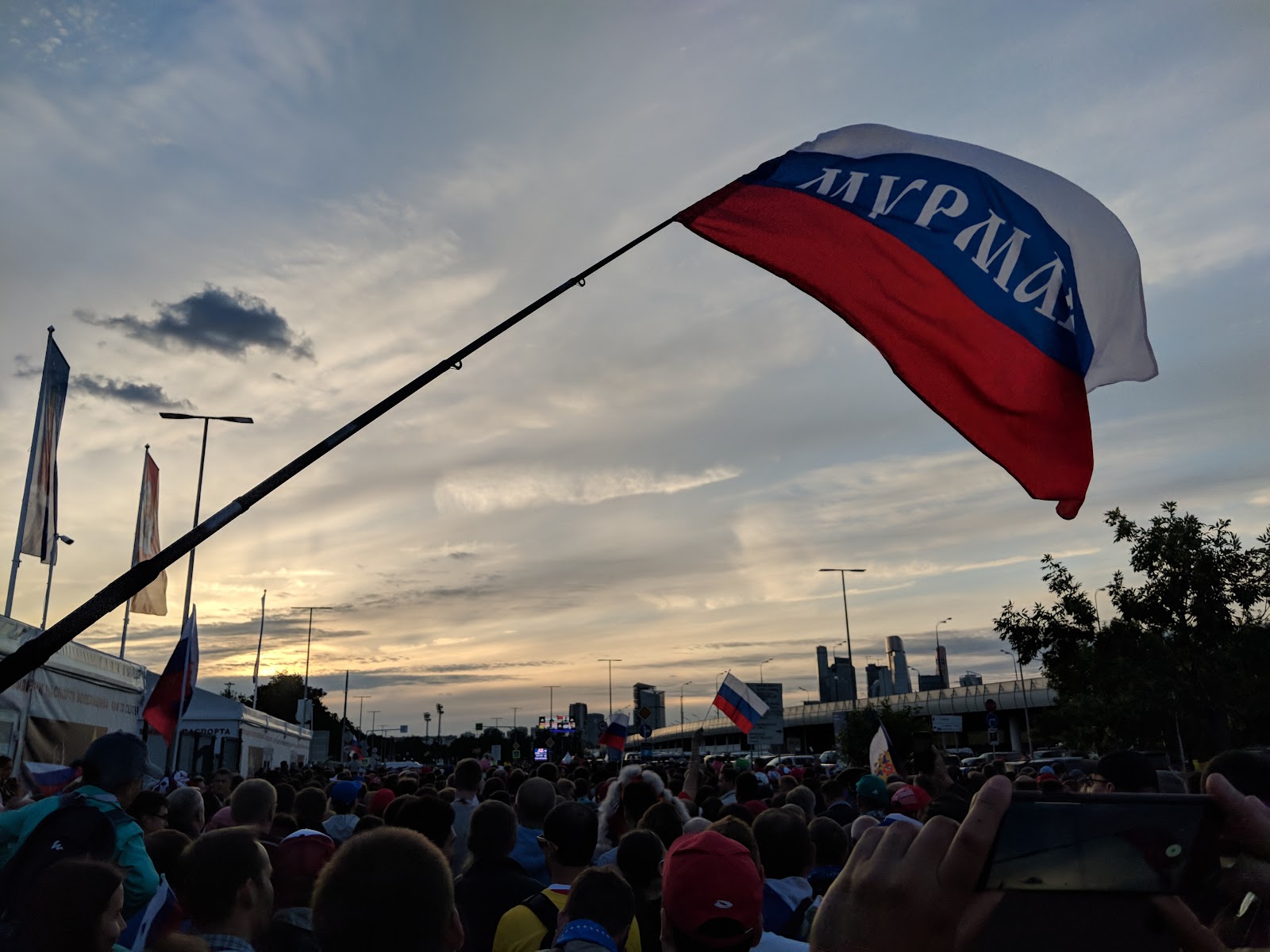