Frenkie de Jong & Man Utd: All the ability - but does he have mentality Ten Hag needs?

COMMENT: He can create. He can tackle. He can knock it long. He can keep it short. Basically, football-wise, Frenkie de Jong has the lot. But upstairs, can the Dutchman handle the pressure of being a Manchester United player...?

Whether it's at Old Trafford, or in a Barcelona shirt, that's the question. The doubt. That will hang over De Jong until he starts performing consistently. For all the 25 year-old's ability, the question will persist... is he prepared mentally to take the next step?

At Barca, they're unconvinced - at least, with this new board and new coach in charge. Xavi, having succeeded Ronald Koeman, has seen enough of De Jong these past six months to rate him as expendable. Joan Laporta, now about to mark a year as president, is on the same page. With the club's finances still a problem, Laporta is ready to sacrifice De Jong to give them some breathing room.

United have placed a €80m cheque in front of him and Laporta is willing to act. With Xavi green lighting it, Laporta's predecessor Josep Maria Bartomeu's €75m flagship deal can be moved on.

For United, with Erik ten Hag now firmly weeks into his new job, a reunion for the two ex-Ajax men is attractive - at least on paper. If Ten Hag and Richard Arnold, now at the beginnings of a first summer transfer window as chief exec, can deliver De Jong as an introduction to the club's support, there's little doubt of how it will be welcomed.

A Barcelona player. A Holland midfielder. An €80m signing with his best years ahead of him. Again, on paper, it's a bellwether deal. A crowd pleaser. And one to set out your stall with.

But De Jong, for all his talent, will arrive in need of a rebuild. In terms of confidence. In belief. Ten Hag knows he will be spending weeks, if not months, one-on-one with his former protégé in order to pick him up after seeing his confidence gradually eroded during two seasons with Barcelona. Having taken Ajax to the Champions League semifinals, the player Ten Hag waved away two years ago with the world at his feet, will again come under his guidance in need of restoration.

Indeed, if Arnold does pull off this deal, Ten Hag's tenure could well depend on whether he can convince De Jong that he is capable of running a game at the elite level. That's the pitch he's made to De Jong to convince him to slum it with United. No Champions League football. No great potential of being a title contender next season. Ten Hag has sold De Jong the idea of being at the fulcrum of this new team he plans to build. Everything will be planned around the Dutchman. The style of play. The players signed. It will all be designed to complement the strengths of De Jong. 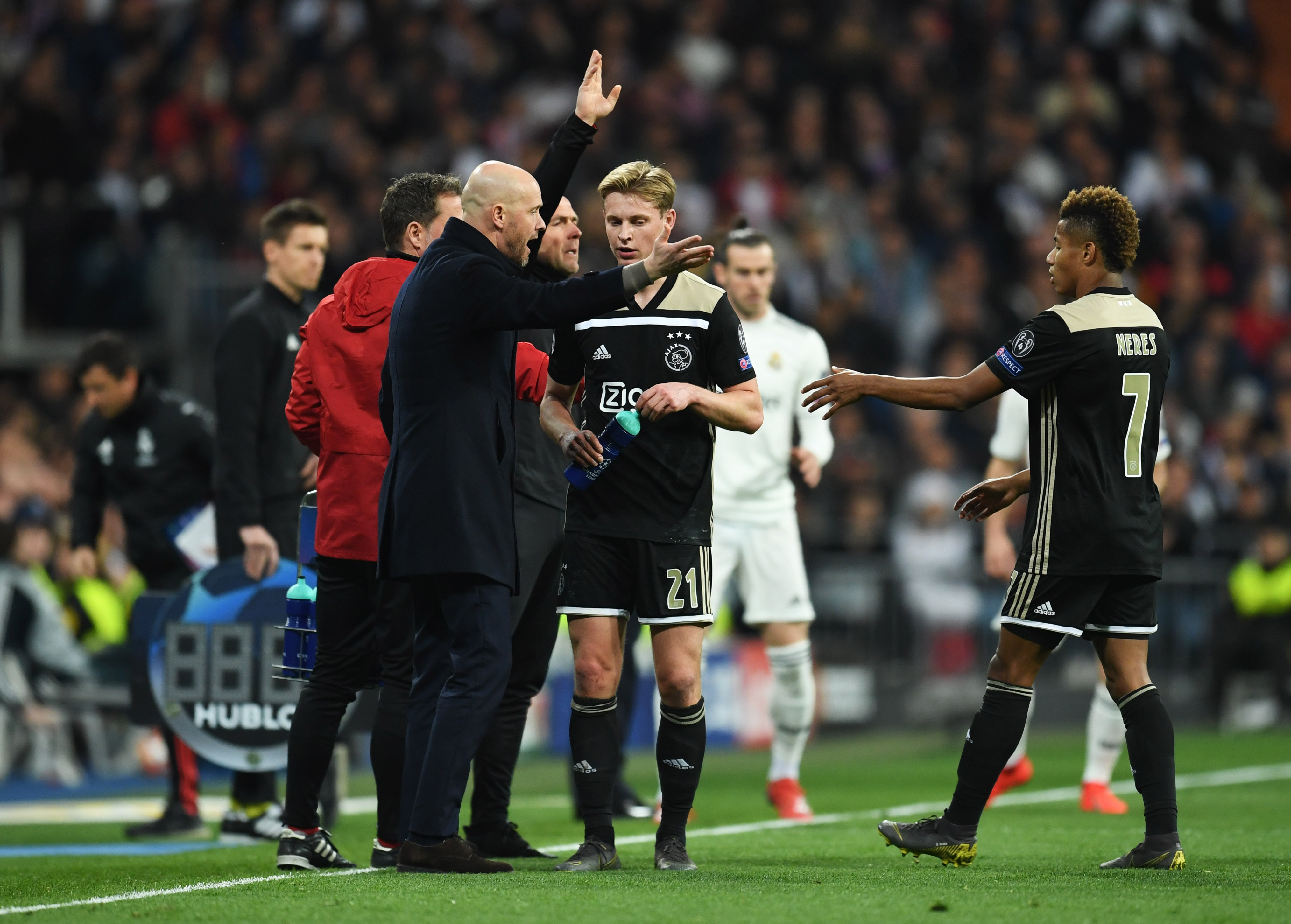 Ten Hag and De Jong together at the Santiago Bernbeu

But as much as De Jong will be gambling on his former Ajax coach being good to his word, this will be an even greater leap of faith by Ten Hag. The new United manager is banking on De Jong discovering the mettle and personality which has failed him in his time with Barca. The talent has never been in question, even for Xavi, but it's De Jong's lack of willingness to take responsibility in games that left his coach exasperated.

"It is a question about our football," said Xavi earlier this year, "being with the ball in the opposite field, having patience. We need people with the package to control the game.

"We don't have those kinds of footballers."

This was after seeing De Jong up close. Before then, before his return to the Nou Camp, Xavi had a different opinion of the Dutchman: "He is seen as a beastly talent. He is really a player to keep an eye on, a very good player."

Again, Xavi has never questioned the ability of De Jong, only his mentality - the mental strength "to control a game".

In Holland, just as in Spain, the doubts persist. Local pundit Valentijn Driessen accused De Jong last year of getting Koeman the sack. Driessen's complaints weren't about ability, but effort. The willingness for De Jong to play beyond himself.

"With his performance in Lisbon, De Jong helped to put the head of his trainer Ronald Koeman further on the chopping block of chairman Joan Laporta," snapped Driessen after Barca's Champions League defeat at Benfica.

"With his safe choices of not attempting a goal himself, he walked away from his responsibility as one of the supporting and leading players.

"As a team player and booster, he does too little. De Jong is strolling along where he has to take the faltering FC Barcelona by the hand at this stage of his career."

And this is the challenge that awaits Ten Hag. If Barca do agree to sell, he knows - potentially - what he'll be getting. De Jong can do the lot. He can create. He can tackle. He has everything in his locker to run a game.

But the question is: does he have the mentality to do that as a Manchester United player?