Found out? Burned out? Why Ole & Fernandes must solve midfielder's form woes

COMMENT: Found out? Burned out? Whatever it is, for the sake of the season - and even their manager - Manchester United and Bruno Fernandes need to solve it.

It just hasn't happened for Fernandes this season. He's been flat. At times, anonymous. The only sign of life being the trademark flapping and flailing of his arms as another opportunity to get on the ball goes begging. Roy Keane may hate it. Gary Neville might (well it's inevitable, he will...) moan about it. But at least it's something. At least we know there's still signs of life in that No18 shirt...

Over the top? Dramatic? No. Not on the evidence of last season. This isn't the Fernandes of that 2020/21 campaign. It's not even the Fernandes of Sporting CP. The player who drew genuine comparisons with Eric Cantona. A player who carried the club on his shoulders for six months - driving them to Champions League qualification. Contrast the buzz and excitement Fernandes would generate when on the ball last season to what we're seeing now and it really isn't unfair to brand him anonymous.

It was hoped that opening day hat-trick against Leeds United would be the rule this season. Instead, it's been the exception. A blip on a radar that we can backdate to last summer's Euros. The Fernandes we're seeing now is much the same that was eventually benched by a frustrated Portugal coach, Fernando Santos. In his four appearances, Fernandes managed zero goals, zero assists and also zero dribbles.

The hangover from that tournament performance hasn't reached those depths in a United shirt. But when considering how it all came together for him last season, in terms of scale, it can be claimed it's getting close.

So has he been found out? Was arriving midseason such an advantage for Fernandes? By his own admission, the midfielder concedes that could be the case. And to his credit Fernandes recognises he cannot afford to rest on last season's laurels.

“The teams now know me better and I don't have the space I had at the beginning, because I came from Portugal and most players didn't know who Bruno was," he says. "Now there is a little less space and time, so I have to improve on that and be quicker to shoot and pass."

So the marking's tighter. The tackling's sharper. And Fernandes is finding himself having to work through these challenges not only on the run, but also on a team in crisis. A team that wouldn't be competing in the Champions League today - nor would have Cristiano Ronaldo and Raphael Varane in it's line-up - without his heroics last season. 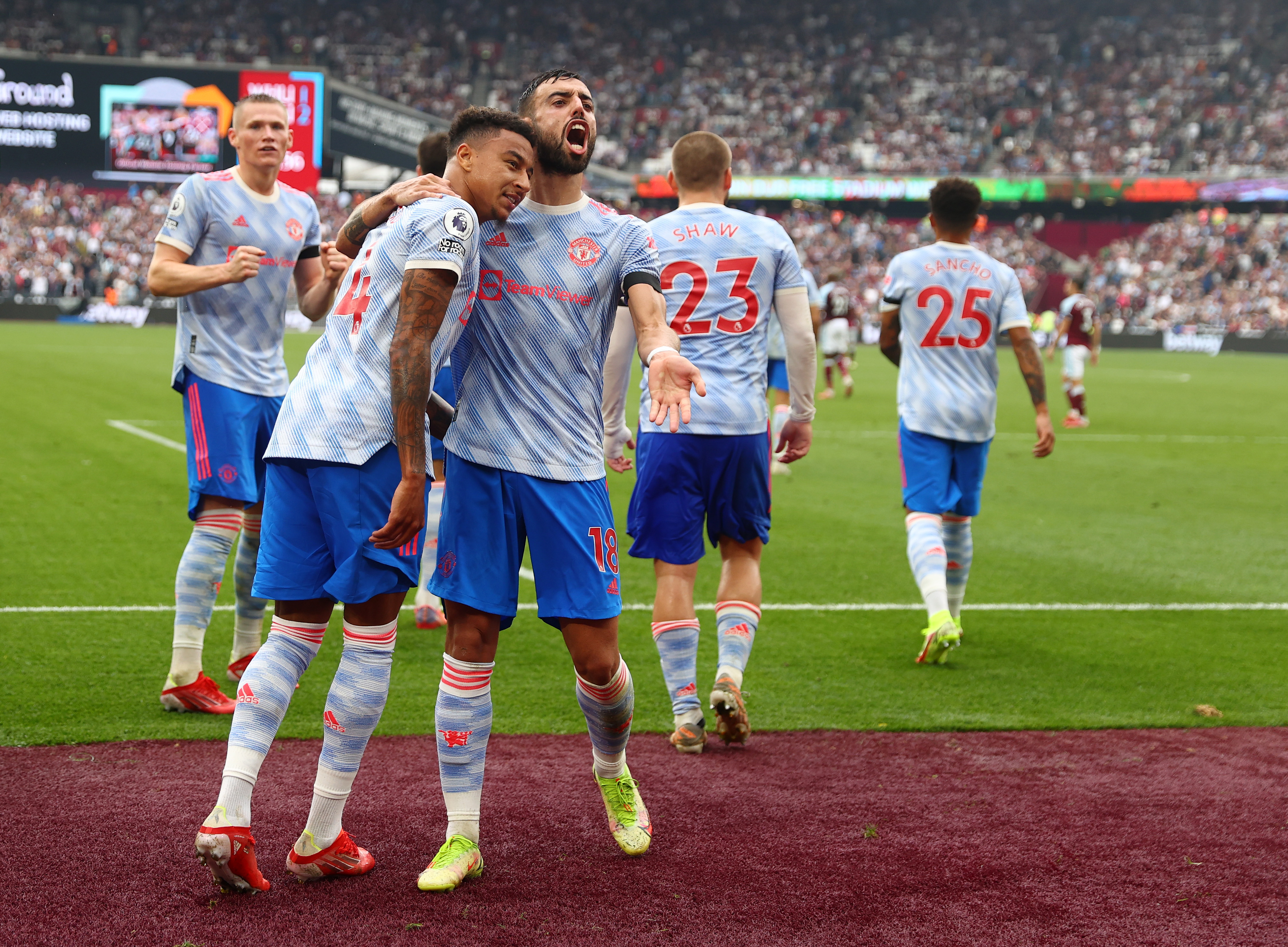 Lingard and Fernandes together at West Ham

In Portugal, just as in Manchester, Fernandes' form slide has become an issue for Santos. He has reinstated the midfielder to his starting XI since World Cup qualifying began, but the return has hardly been spectacular. Indeed just yesterday, ahead of their tie with Serbia, Santos was pressed by local journalists about Fernandes' form - and produced an irritated response.

"I don't have to evaluate the form or individual quality," Santos replied. "You have to ask me coaching questions. I'm essentially focused on the team. I want a capacity for organisation, concentration, a lot of passion, intensity, in many moments. That's what's important for tomorrow's game."

So what about passion? Intensity? Is Fernandes struggling with the workload of 2021? Has he been overplayed by his manager this season? The 27 year-old has started every Premier and Champions League game for Ole Gunnar Solskjaer so far. Which, it must be highlighted, runs dead against what the Norwegian was discussing over the preseason.

Solskjaer knew he had asked a lot from Fernandes last term. He knew he had drawn every drop of energy and inspiration from his January signing to push United into a top four finish. And to be fair, it appeared before Leeds that he had put plans in place to lessen those demands for a first, full campaign as a Manchester United player.

"Bruno last year... maybe I overplayed him but it was because he was so important for us," conceded Solskjaer in August. "Adding these extra players - Jesse (Lingard) coming back, Jadon (Sancho) coming in, Anthony (Martial) being fit again - gives us a lot more to work with."

Wishful thinking? Well, it looks that way now. Indeed, it's becoming ever more clear those three name-checked simply aren't trusted by their manager to step in and ease the workload on the team's prime midfielder. The mental and physical intensity of last season. A flat, subdued Euros. Next to no preseason. And so far a full Premier and Champions League programme... of course fatigue and exhaustion is going to become a factor.

And it must also be mentioned, this is all being played out as new contract talks rumble on behind the scenes. However, credit both Fernandes and Miguel Pinho, his representative - there's been very little transfer tittle-tattle making it's way to the press as negotiations have dragged on.

But with nothing yet agreed. With it all still wide open. It'll be factor. Like burn out. Like familiarity. The contract is another issue weighing on Fernandes' form this season.

Something has to give. The lift could come from the board meeting Pinho's demands. Or it could be made by Solskjaer sending the player away to Dubai for a week's R&R...

But whatever the options, Fernandes and those around him need to put their heads together and find a solution. United's season - and Solskjaer's future - depend on it.