Forget Frank - Seamus is right: Why only these players can stop Everton spiral

COMMENT: No-one saw this coming. At least, no-one inside the board room at Everton. The team. The club. It's all spiraling. And relegation is now a genuine prospect, or so they say...

For this column, Everton will stay up. You shouldn't say it, but these players are too good to go down. Frank Lampard and this squad will find a way to keep themselves out of the dropzone. How? We don't know. But there should be enough in this Everton squad to stay up.

But it'll be tough. It'll be close. When Everton sacked Rafa Benitez mid-January, they were six points clear of the bottom three. Now? Well now Lampard's team are just one point and one place above the dropzone.

For some, there's hope for the next two games. Two home games many say are 'must wins'. But against a rebuilt Newcastle and an exciting Wolves team, Everton will do well to take a point a piece from both matches. Anything more would be a bonus.

Would the club's top brass be feeling better if Benitez was still in charge? Perhaps. The support wasn't happy with his style of play. The results offered little in terms of promise. But the Spaniard knows how to set up a defence. He knows how to eke out a result. It wouldn't have been pretty, but you fancy Everton would be a little further down the road to Premier League safety if Benitez was still at the helm.

But that's not to blame Lampard for the collapse. This is on the players. The away form has been atrocious. Monday night's 5-0 drubbing at Tottenham a culmination of everything we've seen from Everton on away days these past two years. Benitez's ultimate game in charge, defeat at Norwich, a good bookend for this week's humiliation at Spurs. No player (at least very few) downs tools deliberately. But as Seamus Coleman, the club captain, admitted later, that loss in London "felt different". 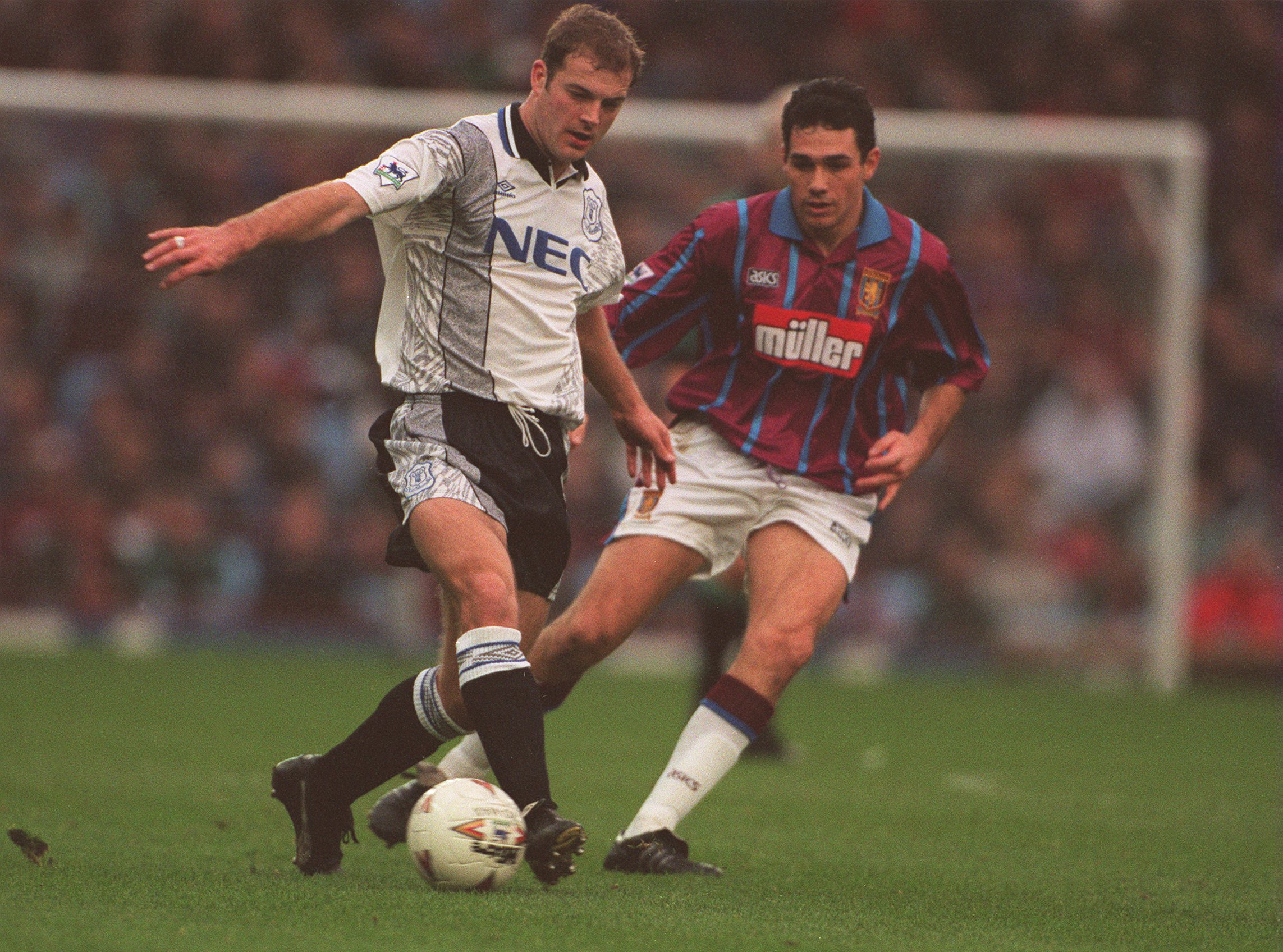 Joe Parkinson challenged by Guy Whittingham of Aston Villa in 1994

The Irishman has been hammered in recent weeks. Jamie Carragher, the former Liverpool defender, even going as far as to say the fullback shouldn't be playing in the Premier League. But Coleman did front up after Monday's debacle and set the table for what is needed for the remainder of the season.

"It's a very disappointed dressing room as you can imagine," he said. "We've had bad away form but that felt like something different.

"Frank Lampard since he's come in has been brilliant but we're a group of players who've been here all season so ultimately it's down to us.

"It's not been good enough and of course we believe in what we're doing on a daily basis but that was really humbling... You've got to believe."

As Coleman says, this one is down to the players. Lampard can only do so much at this stage. It's really up to the players to perform and drag the club up the table, inch by inch, point by point, if needed.

Everton haven't found themselves in such a state for 20 years. Relegation battles were a common theme back then. But they always managed to find a way to stay up. Joe Royle's Dogs of War in the mid-1990s epitomised that era. Something which Everton eventually put behind them with the arrival of a young Scot by the name of David Moyes 20 years ago this month.

Question is: does this Everton squad have that same up and at 'em character? Royle's team boasted Joe Parkinson, Barry Horne and John Ebbrell. Just the type for a scrap. Later it would be the likes of Duncan Ferguson and Don Hutchison who would turn up when needed. Pound for pound. Reputation for reputation. You'd take this current team over any of those sides of Royle and Walter Smith. But that's on paper. On the pitch? In today's situation? Everton could do with a fully fit Parkinson sitting in front of the back four or a Ferguson driving the team on from centre-forward.

At the moment, it's a mess. But out of such strife, heroes can emerge. Reputations made. Characters struck. Dogs of War? Maybe not, but Abdoulaye Doucoure, Allan and Dominic Calvert-Lewin have proved themselves past matchwinners in a Blues shirt. As we've said, there's too much quality in this squad to go down.

But that quality needs character to bring itself out. This is all new for these Everton players. The team has never been in such dire straights. And we emphasise team, as the club's situation isn't much better.

The threat of a points deduction for transgressing Financial Fair Play. The £300m hole Alisher Usmanov's enforced departure has created. Again, as much as it is on the pitch, it's also a mess off it. But for the players, this cannot be an excuse. After all, the board underwent similar tumult back in the '90s as Bill Kenwright took charge.

Coleman is right. Beating the drop will be "down to us". The players now need to step up and stop this spiral. On paper, it should be easy. But the game isn't played on paper. This dressing room needs to find their own Dogs of War to keep Everton in the Premier League.