COMMENT: Something has to give. Mikel Arteta knows this. If he's to avoid losing another - if not two - from his young strikers pool, the Arsenal manager is going to have confront the toughest transfer decision of his burgeoning career.

Folarin Balogun delivered for his manager on Thursday night. With the youngster's contract winding down, Arteta made clear going into their Europa League tie with Molde that he wanted to hold onto the 19 year-old. The Spaniard spoke of Balogun's potential. His willingness to listen. To learn. And the Arsenal 'DNA' his game emits.

"He is a player that I want to stay at the club," Arteta said. "You can see the talent is there, the ambition is there and he can fit with our structure and progress in the future.

"He's part of the DNA and myself and the club are working to try to extend his contract."

And on the back of that, Balogun delivered, coming off the bench to score the final of Arsenal's three goals at the Aker Stadion. A first strike in senior football for the teen. And a cameo to justify all that praise from Arteta the previous day.

But there's a problem. And it's why in February last year Balogun would only commit to a new, two-year contract. The teen remains unconvinced about his first team chances as an Arsenal player. And he's not alone, with Eddie Nketiah, who started at Molde on Thursday night, also finding himself becoming more and more frustrated with his stilted progress.

Arteta knows there's some dissatisfaction growing amongst his young strikers' group. He's already lost one in the last six months: Sam Greenwood choosing to walk out on the Londoners over the summer for Leeds United. A player Arsenal's recruiting staff had fought hard to secure from Sunderland, burning off competition from Manchester United in the process, Greenwood was earmarked for big things by Arteta. The Gunners manager promoting the 18 year-old to first team training towards the end of last season and talking publicly about the Mackem's potential.

But that wasn't enough. Something pushed Greenwood to make a transfer demand. Arsenal reluctantly accepted it and sold him to Leeds in August. Four weeks later, Greenwood was being named Premier League 2 Player of the Month. 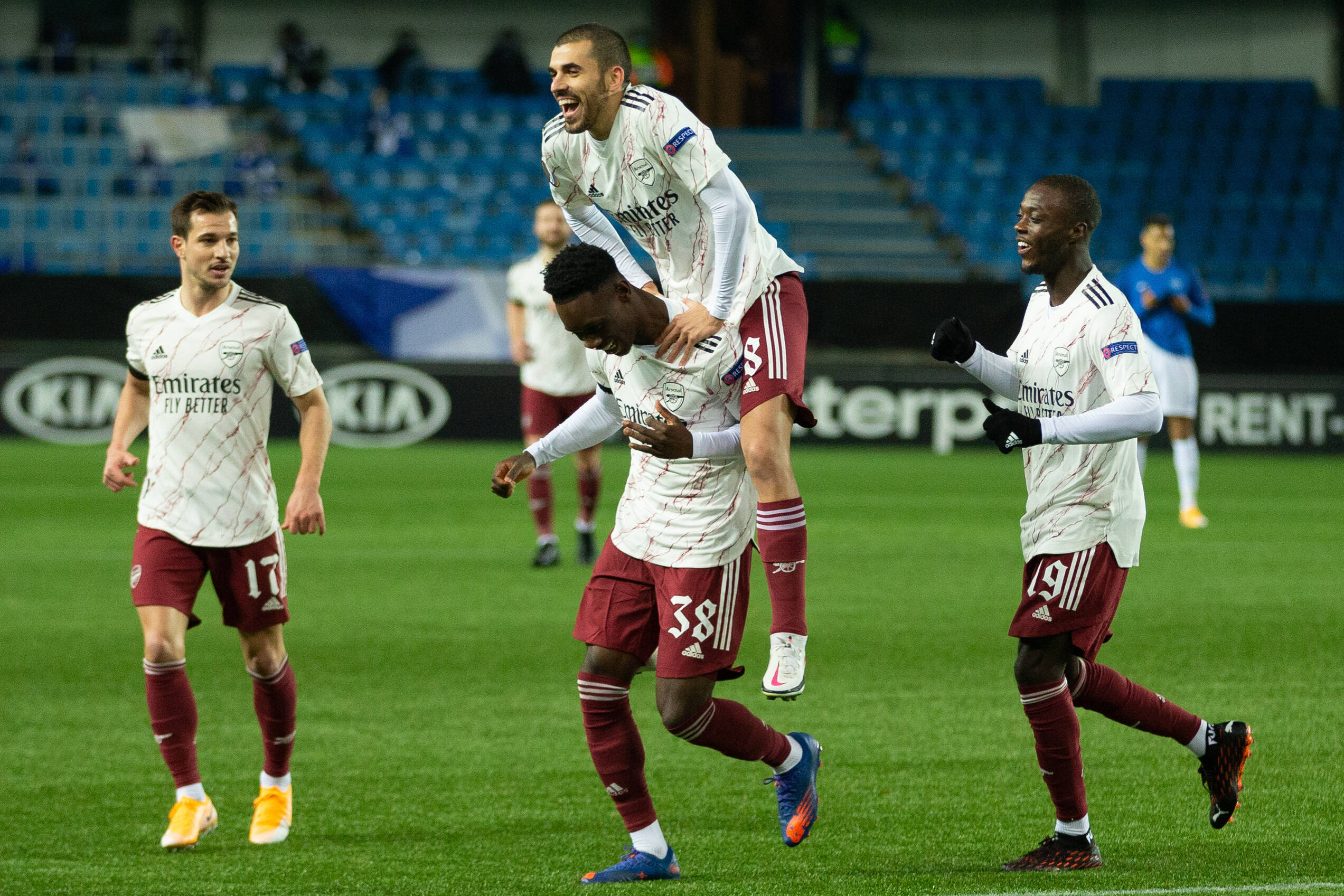 Balogun celebrates his goal at Molde on Thursday night

For Arsenal. For Arteta. This shouldn't be happening. The manager is on record that he wants to work with young players. Indeed, he insists bringing through talent from the Hale End academy was a key factor in him taking the job.

"When I signed for this club it was one of the things that excited me the most because I love to work with them and it's part of our DNA and the history of the club," Arteta also stated on Wednesday in Norway. "When we have them, let's keep them and we really think they are players that can take us to the next level."

But "keeping them", as Arteta surely knows, will involve tough calls. Risky calls. And if he doesn't want Nketiah and Balogun to follow the same Greenwood route, those calls are going to have be made sooner, rather than later.

Nketiah has proven himself at Cup level. As he has in the Europa League. And with Aidy Boothroyd's England U21s, Nketiah is the best of this generation. Twelve goals in just ten appearances proof enough why there's a growing clamour for Nketiah to be given his chance - whether that be as an Arsenal player under Arteta or elsewhere in the Premier League.

For management, Nketiah's situation isn't as acute as Balogun's. The 21 year-old will still have eighteen months to run on his contract in the New Year. But for those in charge, this should go beyond simply keeping under lock and key their best young players. Nketiah, like Balogun, needs to play. At every level where he's been granted the time to settle and adjust, he has scored goals. But now he's entering the critical years, as Glenn Hoddle, the former England manager says, and if Arteta can't find room for him, there's a real danger of Nketiah's career failing to truly launch.

"The ages of 19 to 21, 22 are so important," says Hoddle. "They learn so much so quickly during that time. If players aren't playing regularly at that age, it won't set them backwards, but they do tend to drift. You need to be pushed. You need to be playing in big matches with big players around you and that makes you a better player."

"Drift" is a good word. That's the danger now confronting Nketiah and Balogun. They don't want to be "drifting" during this key development period in their career. They want to be playing and competing. But to do so as an Arsenal player, they'll need a show of faith from their manager.

And this is where it gets difficult for Arteta. If he truly sees both Nketiah and Balogun as the future of his attack, then the obvious call is to put Alexandre Lacazette up for sale. To sell the Frenchman. Risk losing that experience and know-how in exchange for accelerating the development of Nketiah and Balogun. It'd be the biggest call of his young career, but it's a decision Balogun will be seeking as he considers committing to new terms. And you can bet the same regarding Nketiah with his contract also winding down.

And of course all this is occurring as Gabriel Martinelli prepares to return to London Colney's training pitches next month. The Brazilian, for many inside the club, a better option played through the middle than on a flank. It's a welcome headache for the manager to have. But it's one he needs to solve - and soon.

Either way, Arteta needs to be bold. To set out his stall. If he believes in the potential of Balogun and Nketiah, he needs to make room by selling Lacazette. If he can't see either player surpassing the former Lyon man, then it should be the academy pair who are encouraged to move on.

It'll be the toughest transfer decision of Arteta's tenure so far, but for the sake of their careers, Nketiah and Balogun deserve clarity from their manager.