This weekend sees the FA Cup resume with two big semi-final clashes, with Arsenal taking on Manchester City on Saturday before Chelsea and Manchester United meet on Sunday. Here, we at Tribal Football preview the games with a tactical slant.

The last time Arsenal met Manchester City, they were comfortably beaten 3-0. That day, they lined up in a 4-3-3 formation. However, since then, Mikel Arteta has found an effective new look for his side, deploying a 3-4-3 system that defensively becomes a 5-4-1. Since the change, the Gunners have won four, drawn one and lost one of six matches, keeping three clean sheets along the way.

It's no coincidence that upturn in form coincided with the tactical change. Defensively, Arsenal now form a compact midfield four which is difficult to play through, while the move to a back three allows their centre-backs to be more aggressive tracking opposition attackers when they drop off. Additionally, when defending their own box, they now have more aerial presence to deal with crosses.

Against Liverpool – where they got only their second win in 10 league games against top-five opponents this term – Arsenal had around 30% possession. They dropped off, defended in the 5-4-1, with Alexandre Lacazette blocking Fabinho and the midfield pair of Granit Xhaka and Lucas Torreira covering Liverpool's No.8s. Up against City's usual 4-3-3 this weekend, Arteta may go with a similar strategy to take away the opposition's midfield and make them play directly and with less control. 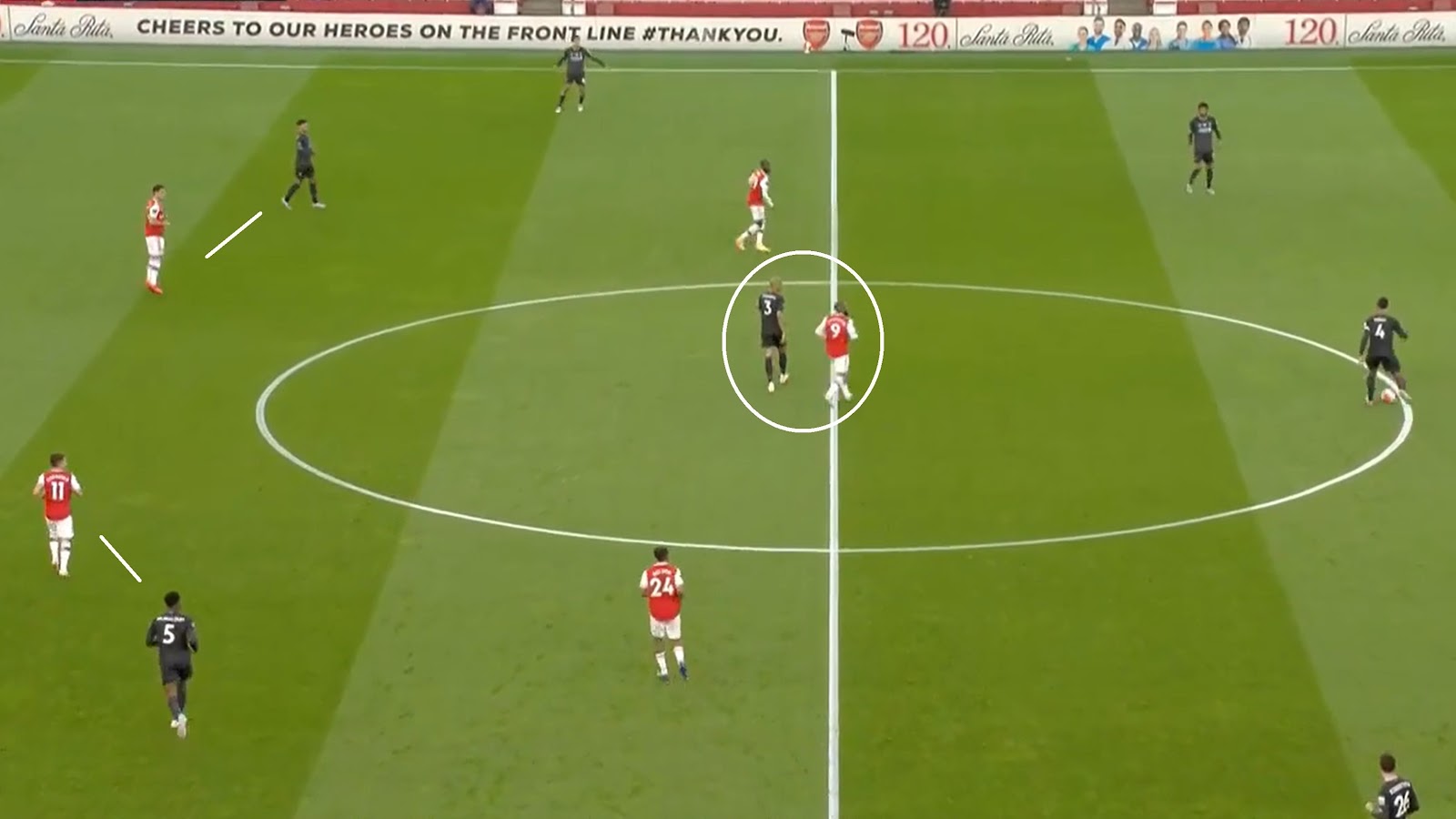 If Lacazette stays close to Rodri, that should stop City from getting the 3v2 overload in midfield they would otherwise get and force their centre-backs to play straight through to the front three more often. Then the nearest Arsenal centre-back can go with the receiving forward, giving them no space to turn.

Arsenal may look different, and the defensive strategy they used to beat Liverpool could work reasonably well this weekend too, but Manchester City remain a serious threat in and around the final third. Regardless of whether their opponents sit off or press, they have a variety of ways to move the ball up the pitch and a number of quality individuals who can single-handedly destroy defences.

Sergio Aguero hasn't played in City's last six league games, but Gabriel Jesus has done a fine job deputising. The Brazilian has scored three goals and set up two for his teammates in the last three matches, making a good case for himself to start on Saturday.

Alongside him will be Raheem Sterling on the left, who recently scored a hat-trick away to Brighton, and perhaps Riyad Mahrez on the right, who has a goal and an assist from his last two starts. With pace, skill and accurate shooting, this front three won't need many opportunities to put Arsenal to the sword.

Manchester United haven't lost a game since January, and have looked even stronger since Paul Pogba returned to the side. However, they aren't flawless, as was shown in their recent 2-2 draw at home to Southampton.

In that match, the Saints started off by pressing with intensity from a 4-4-2 formation. This forced some turnovers, but they also caused problems for themselves because once that first line of pressure was broken, the likes of Pogba, Bruno Fernandes, Marcus Rashford, Anthony Martial and Mason Greenwood were clinical in creating and taking chances. 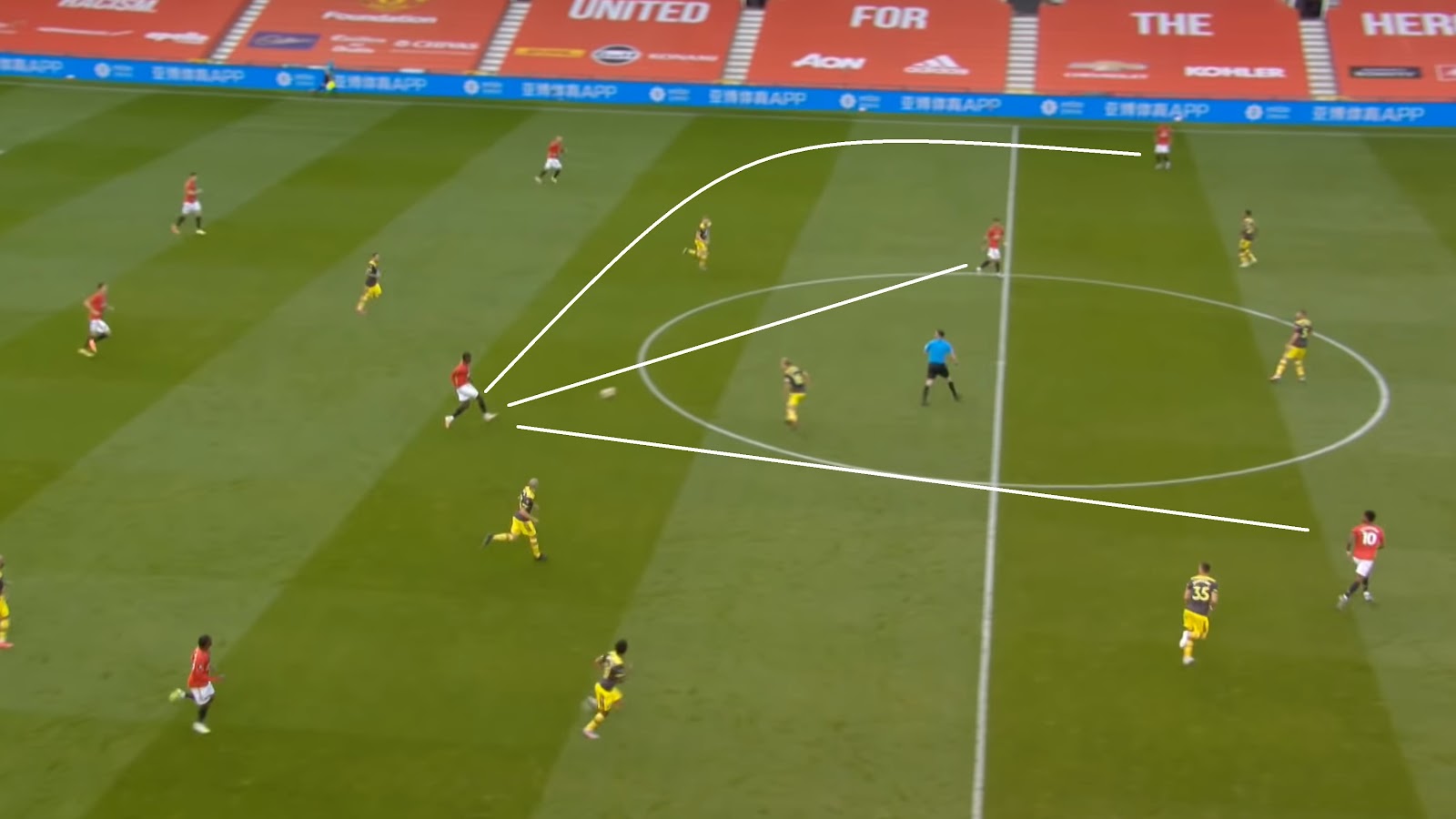 However, after the first 20 minutes Southampton learned from this and sat off United, screening passes into Pogba and forcing their build-up wide. From here, United lacked ideas and struggled to find their front four. One reason for this issue playing through midfield is that they usually have their 'other' midfielder – Nemanja Matic or Scott McTominay – drop into line with the centre-backs when they play out, leaving Pogba on his own in midfield. So if he isn't an option, the responsibility often falls to the full-backs and centre-backs to find the attackers.

Chelsea have adapted for big games under Frank Lampard, and they may wish to do so again on Sunday with a more defensive game plan. If they can find a way to block off Pogba while keeping compact defence and midfield lines, they could neutralise United's biggest attacking threats.

Bruno Fernandes may have gotten a lot of the praise for United's resurgence this year, and other storylines like the return of Pogba and the rise of Greenwood have also garnered a lot of attention lately. However, it is arguably the Rashford-Martial duet that deserves the most praise.

While they don't technically play up front together, the pair do interchange and combine a great deal. Rashford starts on the left wing but looks to dribble inside, while Martial starts up front but tends to drift out towards the left flank. Naturally this means the two link up together quite frequently, and they seem to have formed a potent partnership.

Rashford set up two goals for Martial against Sheffield United, and assisted another in the win away to Crystal Palace with a perfectly weighted one-touch through ball. Martial set up Rashford, meanwhile, in the game against Southampton, holding off his marker before laying off to the Englishman.

In terms of assisting-goalscorer relationships, only Adama Traore-Raul Jimenez (Wolves) and Kevin De Bruyne-Aguero (Man City) are more prolific than Rashford to Martial, which has been the source of five Premier League goals this season. Along with Luke Shaw's overlapping runs, they create a dynamic and effective left-sided attacking force that Chelsea may find hard to handle.