On the surface Chelsea's 0-0 draw with Wolverhampton Wanderers was a disappointing debut for new manager Thomas Tuchel, whose formation change failed to inspire a 'new manager bounce' as many of the familiar tactical issues that plagued the Frank Lampard era rose quickly to the surface.

Clearly, it would be absurd to blame the manager for anything that happens within 24 hours of his appointment, and any supporter left irritated by the events at Stamford Bridge on Wednesday night ought to work on their patience. But more than that, fans should be pleased that so many of the team's glaring flaws were on display. Tuchel will have learnt a lot about Chelsea from this game. He has plenty to get his teeth into.

TUCHEL'S CHANGES – AND WHY HE MADE THEM

Chelsea lined up in a Conte-esque 3-4-2-1 formation with Kai Havertz and Hakim Ziyech deployed as inside forwards behind target man Olivier Giroud. The system was cleverly lopsided, with Callum Hudson-Odoi effectively playing as a right winger and Ben Chilwell as a left wing-back, with the intention of leaning Chelsea over to their right – in turn freeing space for Chilwell to arrive late and unmarked on the other side.

Jorginho and Matteo Kovacic were deployed as the holding midfielders side-by-side, with each player free to probe forward and cycle possession; they took up good positions in front of Wolves' three-man midfield and kept the ball moving into the inside forwards Ziyech and Havertz.

For the first ten minutes, in which Chelsea passed and pressed with great urgency, the system worked. Those dual number tens successfully sucked the play inwards, drawing Wolves with them, which in turn freed up Hudson-Odoi and Chilwell to receive the ball and cross towards Giroud.

Tuchel's apparent intention was to get Havertz in a role that suits his talents best – i.e. operating in the half-spaces – and cram as many creative players into the first 11 as possible, hence later bringing Christian Pulisic on for Ben Chilwell to field four playmakers simultaneously.

Tuchel may also have selected a 3-4-2-1 on the basis that Wolves would be playing a back three, because mirroring Wolves has often proved to be the best way to approach them.

However, after the first 10-15 minutes Chelsea began to slow down as Wolves, looking comfortable back in their best formation, got to grips with the game, sitting deep and absorbing pressure. 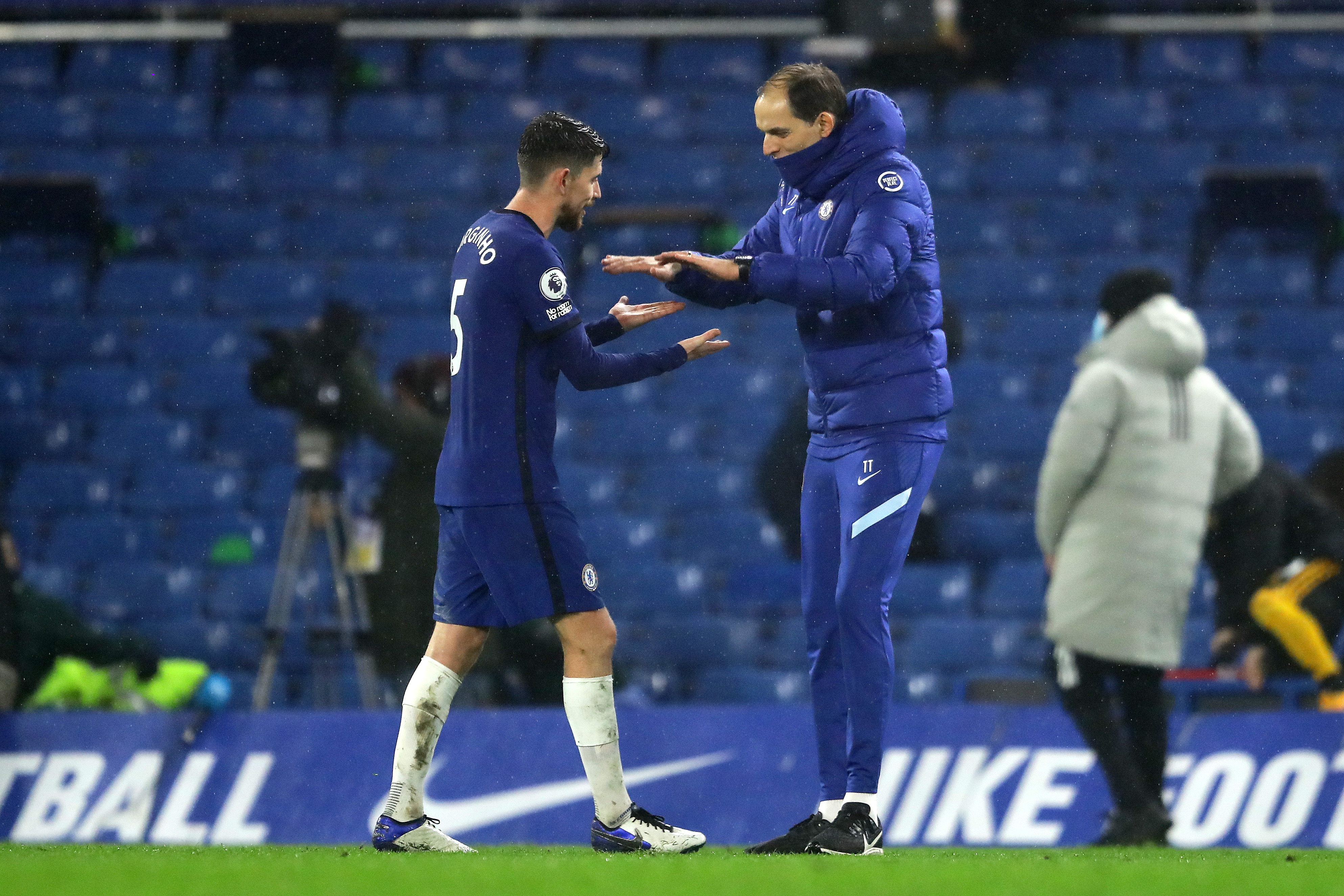 Tuchel and Jorginho together after Wednesday night's stalemate with Wolves

That Chelsea could not break down such a stubborn and compact defence is no failure, especially considering Wolves are one of the best teams in the division at doing this. But the full extent of the tactical work Tuchel must embark on was revealed in the interplay that created the stalemate; Chelsea's players were very sluggish, rarely moving with urgency or in sync with one another.

This perfectly demonstrates what went wrong for Frank Lampard. He did not coach with the microscopic detail – in demarcated zones and hyper-structure positional play – like Tuchel will, instead inviting Chelsea's attackers to improvise their own creative plans. Consequently the players do not have set rhythms to fall back on, meaning they move one at a time – pass, then move – instead of interact in a choreographed fashion that would allow them to stretch apart a defence like Wolves'.

More specifically, Ziyech and Havertz remained too narrow despite Wolves closing off the centre of the pitch with their diligent three-man midfield. Chelsea were at their best when one of these two either made runs behind the defence (everything was in front of the visitors, making defending easy) or moved wide to double up with the wing-back. Hudson-Odoi and Ziyech in particular looked dangerous together on the rare occasions they both occupied the right flank.

In time, Tuchel will give considerably more detailed tactical plans to his players, who will learn how to problem solve more effectively and enter games such as these with set moves already prepared. If he didn't already know, Tuchel will have learnt on Wednesday just how much work there is to be done on the tactical minutiae.

The issue most commonly associated with Lampard's Chelsea was an inability to cope in the defensive transition, which is a knock-on effect of his players' improvisational possession play. They fan out in search of attacking space rather than screen against the opposition counter-attack; again the issue is a lack of structure or scaffolding to where each player stands – and again this is something Tuchel will work tirelessly to fix.

Wolves did not pose much of an attacking threat, but there were ominous signs on several occasions when Nuno's forwards found themselves three-on-three against Chelsea's defence. Between them, Jorginho and Kovacic seemingly had no idea how to track Pedro Neto as he dropped off the front line to receive the ball, turn, and drive forward, flanked on either side by Daniel Podence and Adama Traore.

The visitors were camped so deep in their own half they were largely unable to capitalise on opportunities to break, but the amount of space these players had to burst forward was mildly alarming.

WHAT TUCHEL LEARNT ABOUT HIS INDIVIDUAL PLAYERS

Kovacic's disciplined performance and speed in possession will have impressed a manager who wants to merge possession-dominant football with quick vertical transitions, although Chelsea's overall sluggishness probably means Mason Mount's credit rose by sitting on the bench. Mount is superb at injecting energy into the team, playing on the half-turn, and making good runs beyond the play – all of which were missing on Wednesday.

Hudson-Odoi also performed well, giving Tuchel an interesting option in a slight problem area for Chelsea. Reece James isn't the most assured defensively, Cesar Azpilicueta regularly struggles at right-back, and Hudson-Odoi doesn't get much game time when competing with flashy new signings for a spot on the wing. Deploying the youngster as a right wing-back appears to solve several problems at once.

These are very, very early days for Tuchel, and it may well take more than six months before his strategy starts showing results. His obsessive attention to detail is the polar opposite to his predecessor Lampard, and only time will tell whether that makes the challenge even harder, or whether it means there is less tactical coaching to undo before Tuchel's ideas can be absorbed. Either way, the hectic schedule – not even a midweek break until the international fixtures in March - severely limits the time he will have on the training field.

This may be a slow and difficult process. Wednesday's 0-0 draw is the first glimpse of that - and of how to react to it: a meek performance, but enough green shoots to be optimistic.