COMMENT: It's been just over a week since Wayne Rooney was officially named Derby County boss, an announcement that also signalled the England and Manchester United record goalscorer's retirement as a player.

As retirements go, Rooney's was understated. There was no emotional speech, staged substitution, guard of honour, or rousing ovation from a packed stadium. Having made himself unavailable for selection as interim Derby boss, Rooney modestly just swapped job titles. Despite the lack of personal fanfare, his career was rightly celebrated by players, pundits, journalists, and the fans who have followed the journey from Everton wonderkid, to Derby elder statesman.

Now the dust has settled and his playing career becomes a part of football's past, we can start to try and analyse the Championship's newest boss. Some of the questions will be unfair, but unfortunately our reference point for Rooney is that of a world class player, and unsparing standards will subsequently be set. In the interests of curiosity, let's ask the questions anyway, and see what the evidence tells us so far about Rooney the manager.

I was lucky enough to be at Norwich v Derby back in October, and even luckier to see Wayne Rooney's last ever goal, a stunning match winning free kick. This was of course a behind closed doors game, and with the proximity of the Norwich press box to the pitch, I was able to hear all the player interaction during the game. Two things became very apparent. Firstly, despite having a reputation as a cheeky Scouse chappy, Rooney was quiet on the pitch and got on with his work. Perhaps the endless battles have mellowed the street footballing pitbull we once knew? Secondly, coach Liam Rosenior was a hugely vocal and motivating presence. Rosenior has been named Rooney's assistant, and his energetic approach seems a good counterpoint to a potentially more reflective manager on the touchline.

We have 13 games of evidence to look at what Rooney has done as boss, and even this small sample size can be divided down further. Rooney's former England manager Steve McClaren returned to the club in an advisory capacity the day before match number two - the extent of his influence is slightly unknown. There were nine games with Rooney as interim boss with McClaren also in situ, and the final two games were conducted with Rooney officially announced. 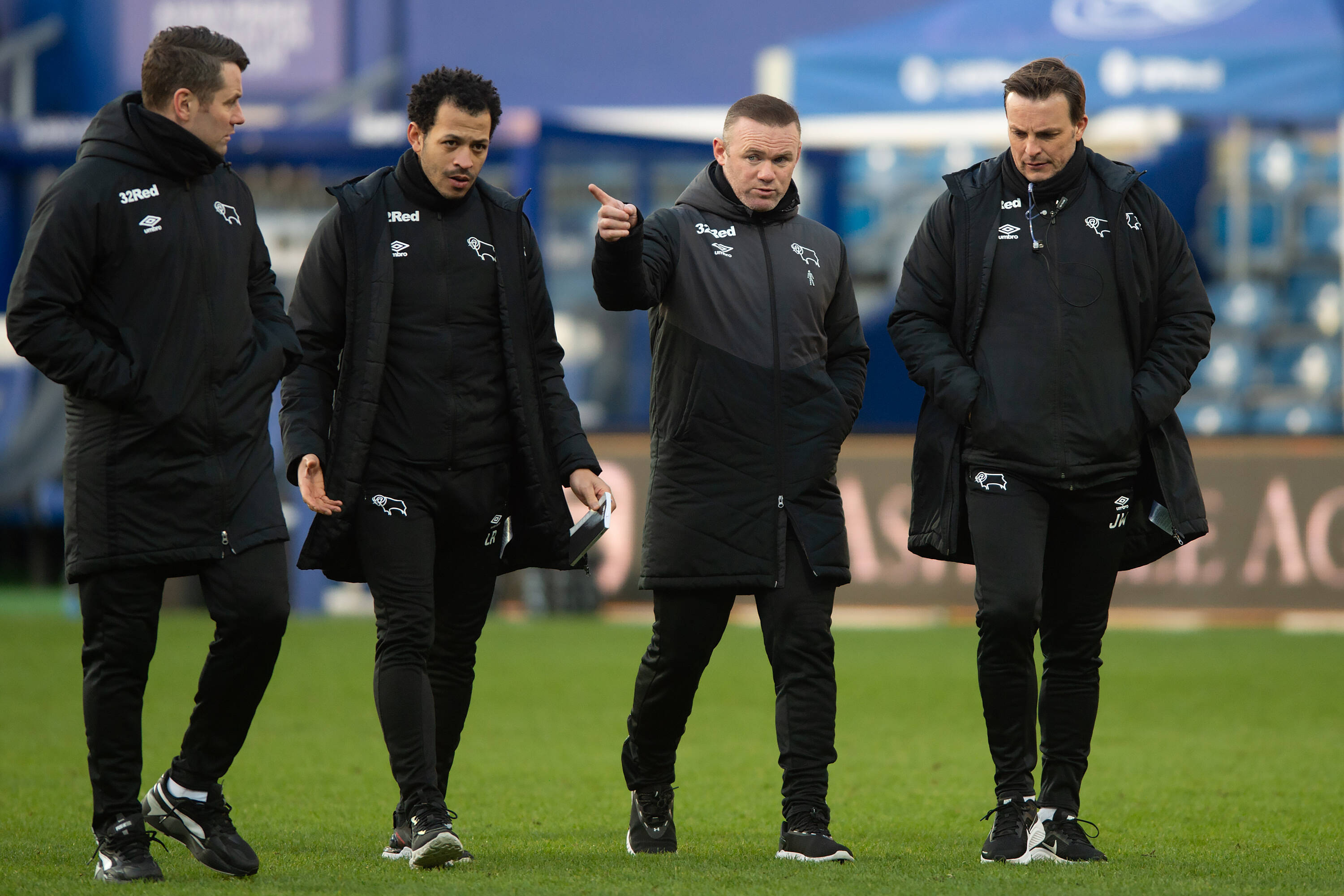 Rooney and his Derby brainstrust

In terms of output, the basic numbers show improvement under Rooney, and surprisingly for such a great goalscorer, it has been built on defence. Over the past 11 outings Derby have not conceded more than one goal, kept clean sheets in six games, and their goals against per game has decreased by 48%, from 1.45 to 0.69. The points per game jumps a huge 127% from 0.54 to 1.23, and Derby go from being the 24th best team in the league under Phillip Cocu, to the 15th under Rooney. Obviously whilst praising Rooney's good work, we must take into account the possibility that the team was underperforming badly under Cocu and some of this improvement may be down to a simple 'regression to the mean'. The Rooney era has so far seen Derby line up with a back four in 12 of the 13 games. The shape seems to move from a 4-2-3-1 to a 4-3-3 around 8 games in, with Rooney seemingly ditching the number 10 role having tried Holmes, Knight, Sibley and Lawrence there. Derby's most recent game saw Rooney match up Bournemouth's 3-4-3 shape to good effect, whether this strategy will be used regularly or not we'll find out over the coming months.

I'll dodge the slightly unfair question of 'will Rooney's achievements on the pitch be matched in the dugout?' and move to the slightly more pertinent 'will Rooney's teams reflect how he was as a player?'. This idea of a team being a reflection of a player is an interesting one, intimating that a manager should do what they know, and encourage their players to do what worked for them on the pitch. There is some sense to this idea, although some argue that great players don't make great managers for this very reason. Is it plausible for Wayne Rooney to expect players functioning in the bottom half of the second tier to mix explosive power, dynamic physicality, and sublime skill like he did? Of course not.

This accusation of unrealistic expectations was levelled at former England manager Glenn Hoddle, and probably more accurately at Rooney's fellow Manchester United legend Roy Keane, who floundered trying to get a tune out of his poorly recruited Ipswich Town squad. We can of course find examples of managers who had great success with teams that in no way reflected their as a player. The obvious go-to would be George Graham, a classy midfielder who led Arsenal to two league titles with military style discipline and legendary defensive solidity. Or on the flip side, a no-nonsense centre-half like Jaap Stam or Tony Mowbray, presenting patient flowing passing football.

One easy comparison to make between Rooney the player and his team is that of fearless youth. Rooney knows exactly how to thrive as a teenager and stay at the top, and an excellent crop of Derby youngsters will hope they can follow in his footsteps. Sibley a creative attacking force, Buchanan a left sider with springs in his boots, Bird and Knight in midfield, all established at Championship level, and some will surely go higher.

What has caught the eye most during Rooney's tenure so far has been the ability to mix it with the Championship top six. Although the 0-4 win at Birmingham was the most convincing, a 0-0 at Brentford, and home wins against Swansea and Bournemouth may be most pleasing. The Swansea game was particularly impressive, with Steve Cooper's excellent side completely surprised by a commanding first half Derby performance. A team playing ambitiously on the front foot, Buchanan and Byrne pushing from full back, Bielek dominating central midfield, Jozwiak and Knight providing dynamism, energy, and quality.

The obvious elephant in the room I've done well not to mention so far is the 'on off' takeover saga. Chaos and uncertainty off the pitch will not give Rooney the best circumstances to thrive in, and for us to fairly judge his work at Derby going forward would need to take into account such potential distractions.

So the journey begins for Rooney, the expectations are high, but then so are his standards. Derby have been a force in the Championship this past decade but fallen short in the playoffs too many times, and with the Mel Morris ownership in theory ending soon, are in need of a new beginning. Rooney will be the man to try to provide the new beginning, and becomes the latest big name to test the 'great players don't make great managers' theory. If he can prove it wrong, Rooney will join a very elite club of football personalities who dominated on the pitch and in the dugout.